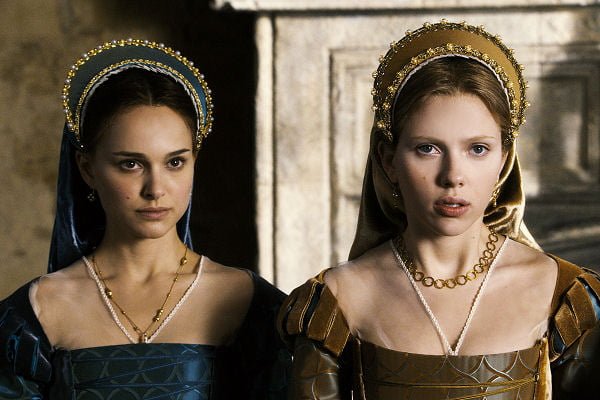 Natalie Portman and Scarlett Johansson in The Other Boleyn Girl

Get into a theatre this week and jump between the covers as King Henry VIII must decide between two sisters in The Other Boleyn Girl, or catch up with Penelope and her piggish snout while she tries to break her curse and find true love. Also opening this weekend, City of Men takes us inside a gang war as two friends try to make sense of their lives, and Will Ferrell takes on another sports comedy.

The Other Boleyn Girl
History gets its knickers in a twist this week with the screen adaptation of Philippa Gregory’s novel The Other Boleyn Girl. Based loosely on the real life soap opera tale of two sisters who tried to earn King Henry VIII’s heart, and the royal seat that went with it, the film stars Natalie Portman and Scarlett Johansson as Anne and Mary Boleyn, with Eric Bana as Henry.

As with all interesting stories like this, there is plenty of intrigue, betrayal and romance to go around as Mary fights for Henry’s feelings, while Anne merely fights to become Queen. But amazingly, while their fight will actually tear the country apart, the sisters will try to stay true to each other.

Good period dramas depend on a lot of elements to make them work, and The Other Boleyn Girl certainly has an interesting cast and a great concept, but a number of critics are less than impressed with the film, which they say is dull, transparent, and not very sexy. There are still a few critics who praised the film, and Jan Stuart of Newsday sums up at least one of the draws in the film: “Beneath the thundering horse hoofs and happy wedding fiddles is a viper’s nest of sexual intrigue that would be at home on Desperate Housewives.”

Penelope
Debuting in 2006 at the Toronto International Film Festival, Penelope has taken a while to make it in front of audiences, but there seems to be little explanation why. Set in a modern fairy tale world of rich families and secrets, Christina Ricci is Penelope, the child of wealthy socialites who is cursed with a pig snout for a nose.

For years the family hides her away, covering up her existence, even as they try to break the curse by bringing in young men to woo her. They of course all run away.

Their only hope is that one day she will be “loved by one of her own kind”, but when one suitor (James McAvoy) disappears on her, Penelope decides to run out and see the world for herself. On this adventure she will make a friend, played by Reese Witherspoon, and her secret will finally be revealed.

Described as a story of love and self-acceptance, the film is aimed at teenage girls, but might find a wider audience thanks to the appeal of the cast and characters. Rex Reed of New York Observer offered praise to the movie, saying that “for a film that is basically about a hip, New Wave fairy princess, Penelope has both old-fashioned charm and a freshly modern approach to the subject of media manipulation and celebrity culture.”

City of Men
From producer Fernando Meirelles, who also brought us City of God, comes a story about two friends split between sides in a gang war that threatens to consume them, and deal with a shared secret from their past. The film stars Douglas Silva as Acerola and Darlan Cunha as Laranjinha, and promises a story that is intense, tragic, and engaging.

There are very few bad reviews for the film, with most critics agreeing that this is a mystifying tale. Julia Wallace of the Village Voice offers one of the most compelling descriptions of the movie, saying in her review, “Paulo Morelli directs capably, with a heavy dash of MTV-generation flair: hyper-saturated colors, close-ups of skin glittering with sweat, and a constant patter of gunfire that undergirds the soundtrack like a steady heartbeat.”

Semi-Pro
And Will Ferrell leaps back into another comic sports film, this time playing the role of a basketball player, owner and coach who has to turn his team of losers around or miss out on the chance to be included in the NBA. Semi-Pro also stars Woody Harrelson, Will Arnett, and Andre Benjamin. It is also bound to please any Ferrell fans, although perhaps without any real edge.

Reviews are of course decidedly negative, with Michael Phillips of the Chicago Tribune saying in his review: “Like so much in this life, Will Ferrell’s comedies tread the razor-thin line separating smart/stupid from stupid/stupid.”