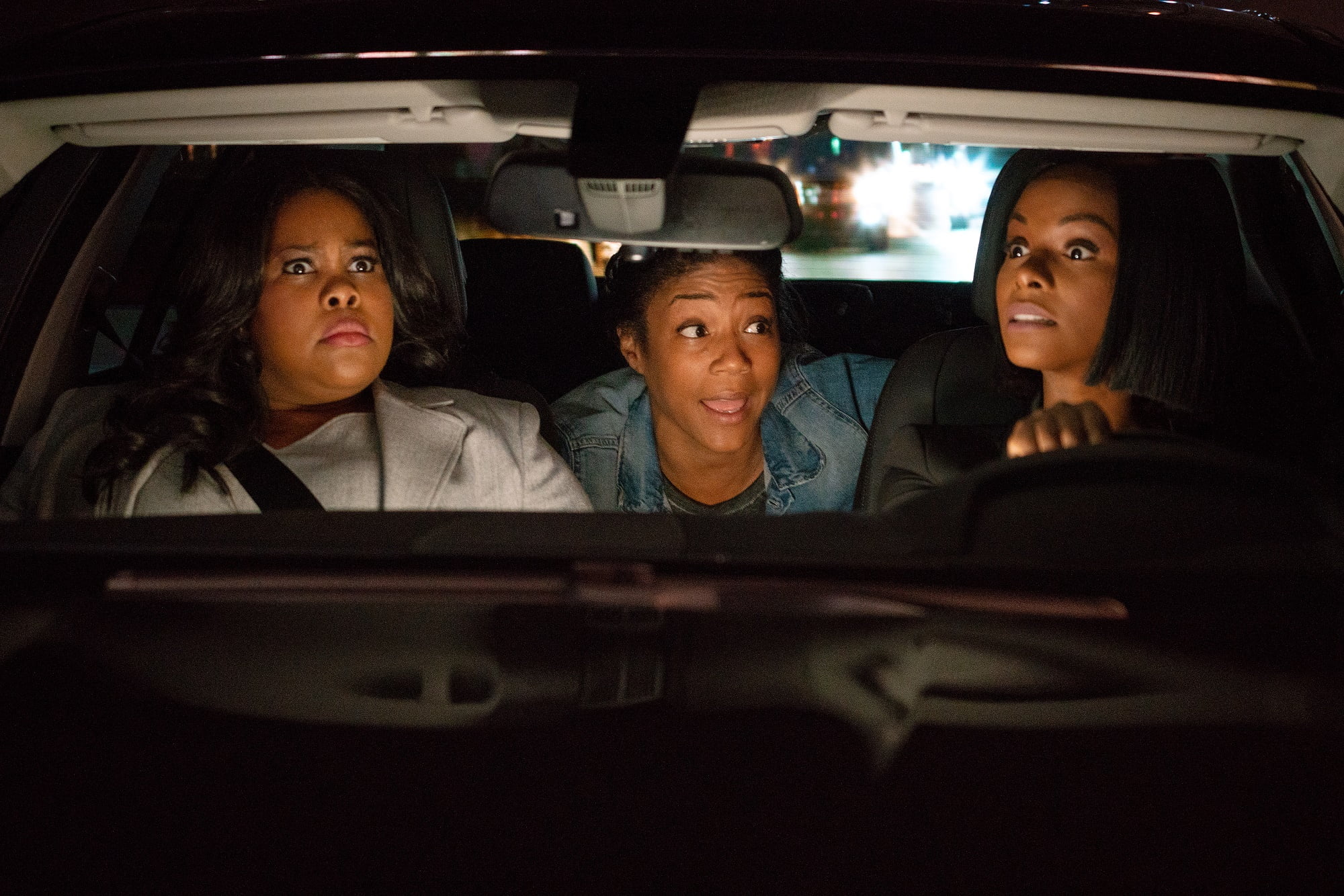 Nobody’s Fool, the latest effort from low-budget hitmaker Tyler Perry (which wasn’t screened for press in advance of its opening this weekend), showcases a filmmaker that’s simultaneously trying to break out of the mold he’s created for himself and one that gradually gives in to his own worst impulses. For the most part, Perry’s first and most unabashed crack at a full-on potty mouthed raunch-fest is reasonably charming thanks to a pair of leads that are down for pretty much anything. And if it had ended a full thirty minutes before it actually does, Nobody’s Fool might’ve warranted a lightly passing grade. It doesn’t, stretching long past the breaking point with an unnecessary, darkly manipulative twist that finds Perry stitching further moralizing onto a film that already had enough of a message to hold it together. The first eighty minutes of Nobody’s Fool finds Perry at his raggedy, crowd pleasing best. The final twenty minutes highlight some of the worst work of his career.

Financially successful and upwardly mobile NYC marketing company executive Danica (Tika Sumpter) is on the verge of a major promotion at work if she can come up with a successful campaign built around a bougie new perfume called The List. Not too far removed from a soul crushing break-up at the hands of a cad (Adrian Conrad) who cheated on her, Danica has been spending the past several months texting and flirting with an online crush, refusing to indulge any other flirtations or advances, including those from Frank, a kindly, hottie coffee shop owner (Omari Hardwick), who’s perfect in every way except that he’s a recovering alcoholic with a criminal record. She’s convinced that her mysterious “Charlie” is the man of her dreams, and the only person who checks off every box on her metaphorical list of characteristics that make up a perfect life partner. Danica’s best friend and co-worker, Callie (Amber Riley), is concerned that Charlie isn’t real, citing the fact that Danica has never once skyped, facetimed, or met this guy (who says he has poor Wi-Fi thanks to working on an off-shore oil rig). But no one is more concerned than Danica’s loud mouthed, hard partying sister Tanya (Tiffany Haddish), who’s come to stay with her sibling after recently being released from prison. While the sister’s personalities and life goals clash wildly, it’s Tanya’s constant questioning of Charlie’s existence that will prove to be the biggest thorn in Danica’s side.

Although writer-director Perry is working with a slightly larger major studio budget than he’s usually afforded, and the material is a lot more risque than he usually crafts, Nobody’s Fool still looks and moves like one of the auteur’s films every step of the way. Most scenes are brief, and they’re edited together as laxly and casually as possible, almost to the point of sloppiness. Characters speak in ways that are beholden to Perry’s stage roots, often using cadences that don’t always sound like actual people and sometimes dumping loads of necessary exposition in single passes like human crop dusters. Visually, Nobody’s Fool looks slightly better than the average television sitcom, but that’s fine for this kind of material and Perry’s overall tone. On a technical level, Perry isn’t adding much of anything new to his arsenal outside of a handful of moderately difficult tracking shots. 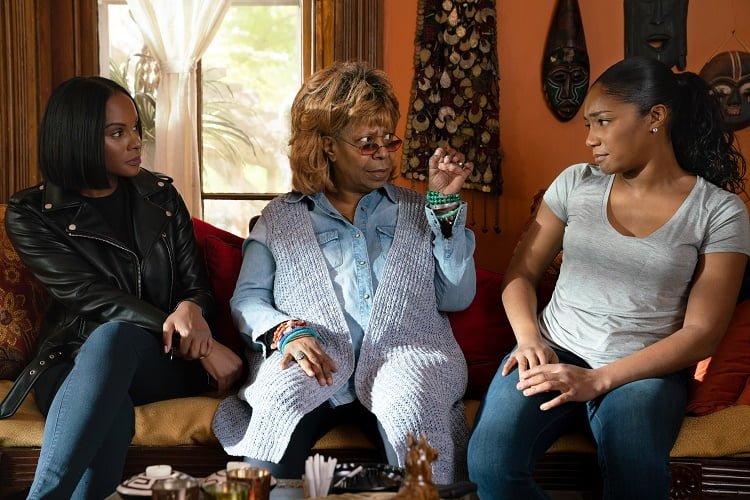 Aside from a lot more cursing that one normally finds in a Perry flick (with most of it unsurprisingly coming from Haddish), more overt and explicit talk about sexuality (including a weird sex scene that constantly bounces back and forth between erotic and ridiculous, which sounds pretty appropriate now that I think about it), and only a few nods to the overt Christian audience pandering of most of his other works, Nobody’s Fool gets off to a reasonably amusing start. The idea of a boorish, unhinged sister teaming up with a straight laced best friend to help break a loved one out of a funk and potentially stop them from being catfished is a pretty good concept that hasn’t been done before. The freshness of Perry’s premise carries the movie a long way, especially when one considers that Nobody’s Fool isn’t always that funny. There are some assured belly laughs to be found here and there, but most of the punchlines land with a leaden silence. Thankfully, Perry gets Nobody’s Fool off to such a quick, confident start that even if a joke misses wildly, there’s another one not too far behind that will hit the mark. Perry’s editorial sensibilities aren’t strong enough to keep only the best stuff in the film, but the most memorable moments of Nobody’s Fool are amusing and wild enough to make most viewers forget that there’s a lot of dead weight on this thing.

Sumpter and Haddish are a wonderful team to headline something like Nobody’s Fool, with the former being given a deceptively complex role to work with, and the other one being unleashed on the film like the Tasmanian Devil. Watching Sumpter playing a somewhat uptight, but likable professional woman who perpetually represses any feelings of pain and sadness gives Nobody’s Fool a formidable amount of dramatic weight, while Haddish throws all caution to the wind, rips the knob off her emotional controls, and gives everything she has to Perry’s comedic cause. Watching Haddish in this film might be exhausting for some, but she never distracts from the fact that the film is built around Sumpter’s story. It’s the rare example of a performer going so far over the top that she practically reaches Uranus and slaps it across the face, but doing so without losing sight of the needs of the story. They work well together, and they’re probably the main reason Perry’s latest is even somewhat successful.

Sumpter and Haddish are also aided wonderfully by a game supporting cast. Riley makes a major, scene stealing impression as Danica’s closest ally, which says a lot opposite someone like Haddish. Whoopi Goldberg gets a chance to dust off her comedic chops for some really funny throwaway moments as Tanya and Danica’s irritable pothead mother. Missi Pyle gets a few choice sequences as Danica’s scatterbrained and borderline terrifying boss, and Hardwick gets plenty to work with as a soulful beefcake with genuine depth and a wealth of empathy for those around him.

The characters aren’t the biggest problem with Nobody’s Fool. It’s what Perry wants to ultimately do with them that sinks the film entirely. There comes a point long before the conclusion of Nobody’s Fool where things seem to wrap up in a nice, satisfying package (complete with a pretty nifty cameo). It’s a logical conclusion, but unfortunately there’s a full thirty minutes remaining in Perry’s latest, and they’re positively gross. Concocting a fourth-act swerve that wouldn’t be out of place in late 90s-era professional wrestling and just as tastelessly delivered and handled, Perry makes Nobody’s Fool into a completely different and far more agonizing and aggrandizing morality play. While the looseness of everything that comes before it suggests a lighter side of Perry, the filmmaker’s frequently obnoxious desire to batter audiences into moral submission kills any sense of fun Nobody’s Fool showcased prior to its implementation. If the early going of Nobody’s Fool is a breezy rom-com, the falsely pious, dragged out, illogical, contrived, and painfully manipulative conclusion is something else entirely. From the outset, Nobody’s Fool looks like it will be one of Perry’s better efforts. By the conclusion, it has become one of his worst.

Check out the trailer for Nobody’s Fool: