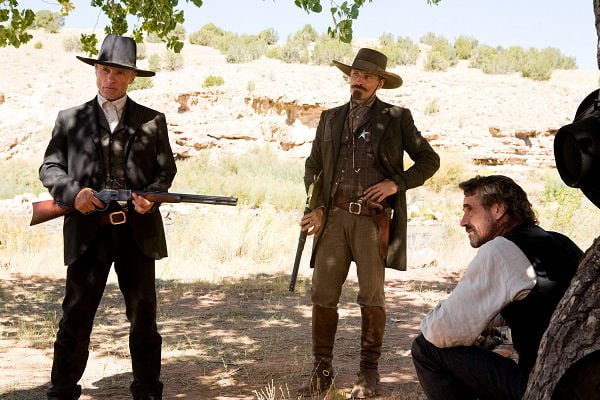 Bragg has been reigning over the town of Appaloosa for some time, but when he kills the sheriff, the town calls in Virgil to enforce the law. At the same time, Virgil falls for newcomer Allison French, played by Renee Zellweger, who is making her feminine presence known to all of the men.

With an intelligently written script, and an easy-going style, Appaloosa is a superb Western that feels like a classic. Harris and Mortensen are fantastic together, and Irons is his usual thuggish self, although he is not exactly the most menacing of villains.

While the movie does move a bit slowly, especially early on, Appaloosa is worth a watch, and makes for a great genre film when so few are being released.

Mirrors
Poor Kiefer Sutherland. How did he go from the height of 24, one of the most popular television series ever made, to starring in a cheesy horror movie about cursed mirrors?

From the brain-dead opening to the scenery-chewing performances by almost the entire cast, Mirrors breaks new ground in horror stupidity.

Sutherland plays Ben, a former cop trying to get back on his feet by taking a job as a night watchmen at a burned-out department store. Ben soon realizes that something evil lurks behind the mirrors, and it has an unending willingness to kill anyone and everyone Ben holds dear.

With ham-fisted directed by Alexandre Aja, and one of the dumbest opening sequences ever filmed, Mirrors is the kind of story you expect to see in a video game, more than in a feature film starring the likes of Sutherland.

The quasi-remake of the South Korean horror film Into the Mirror uses every cheap horror trick in the book, but it feels like Aja was trying too hard, using tricks that merely come out feeling like clichés. Sutherland also goes way over the top in this role, going for a performance that might have played out well in the silent era of film, but just looks ridiculous by modern standards.

Overall, another sad Asian-inspired horror remake, and proof that maybe Sutherland needs to choose his film roles a bit more carefully, or stick entirely to television.

As Tank, Cook is a bad date for hire who helps men get back their ex-girlfriends. When Dustin (Biggs), asks Tank to help him out though, things get obviously complicated when Tank wants to keep her for himself.

As Stephen Cole so eloquently put it for the Globe and Mail, My Best Friend’s Girl is “an ugly, strictly-for-meatheads comedy that can only be recommended to couples who wear matching Tie Domi Toronto Maple Leafs jerseys out on a date.”

Although, I think Michael Ordoña of the Los Angeles Times more aptly wrote, “Ultimately, its most unforgivable sin is that it’s simply not funny.”

Sin City [Blu-ray]
Arriving in all its noirish glory this week, Sin City debuts on Blu-ray for all those slavering fans who may have been a bit disappointed by Frank Miller‘s recent flop, The Spirit.

Starring Mickey Rourke, Rosario Dawson, Bruce Willis, Benicio Del Toro, and Jessica Alba, to name a few, the film was co-directed by Robert Rodriguez and Miller, and is based on Miller’s famed graphic novels of the same name.

Peering into multiple stories set in the violent world of Sin City, the film is what I consider one of the most artfully design films ever made, and it is the kind of film truly meant for the Blu-ray format.

The story simply revolves around Dr. Horrible, an aspiring evil villain who wants to join the Evil League of Evil. He also has his heart set on a girl named Penny, played by Day, and has to deal with the superhero Captain Hammer, played by Fillion, who keeps getting in the way.