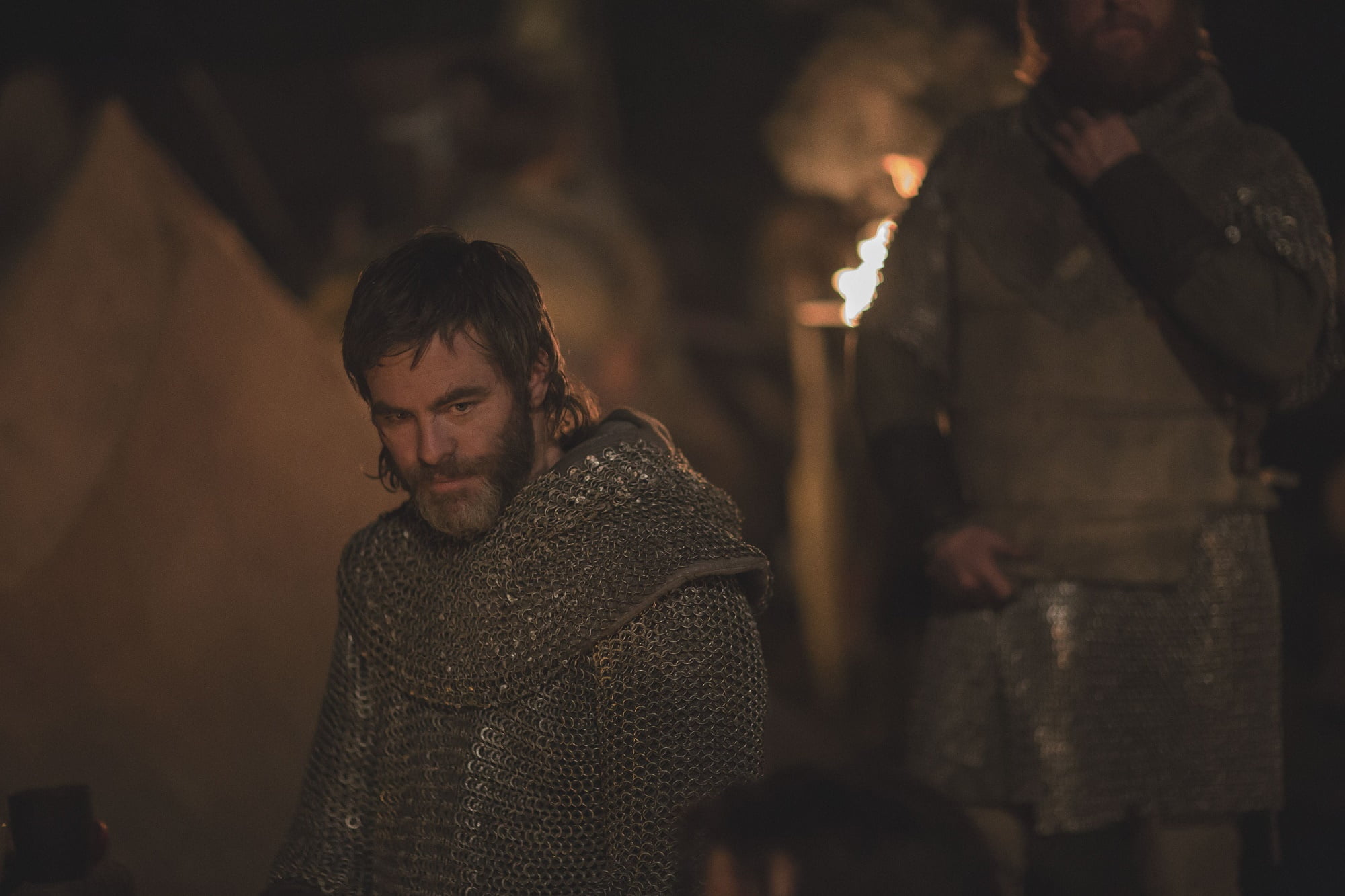 The light beer equivalent of Braveheart, David Mackenzie’s competent, but relatively pointless epic Outlaw King has plenty of bloodshed, lots of actors shouting impassionedly, expertly lensed melees, picturesque locations, and not much else of note. Drained of any colour outside of grays and reds, Outlaw King is as by-the-numbers as pictures about social and political revolutionaries tend to get. This retelling of Scottish hero Robert the Bruce, the rise of his kingdom, and the role he played in the fight for his country’s independence doesn’t do anything particularly wrong, but it’s never thoughtful or deep enough to feel like anything more than an okay waste of time when there’s nothing better to watch.

Shortly after the exile of rebel and military leader William Wallace, all lords and earls of Scotland are forced into taking oaths of fidelity to King Edward I (Stephen Dillane), including Robert Bruce (Chris Pine), one of two men with legitimate claims to the country’s currently vacant throne. After finding out that Wallace has been found, captured, and killed, Robert finds his desire to fight the English reinvigorated, and he starts aligning himself with like minded people willing to start the revolution anew. Robert, recently remarried to the goddaughter of Edward (Florence Pugh) and a single father from a previous wife who passed away, does what he can to stir up dissent with only forty men. An irate Edward puts the Prince of Wales (Billy Howle), his overly eager, sociopathic son, in charge of quelling the uprising, allowing him to “raise the dragon” and eliminate all forms of chivalry or quarter from battle, but Robert will use his knowledge of his country’s geography and its people to his considerable advantage.

Mackenzie (Hell or High Water, Starred Up) imbues Outlaw King with a complex sense of style that makes the film look better than it actually is. Opening with a flashy long take that weaves between regal tête-à-têtes inside a tent and Robert having a mostly good natured and booze fuelled squabble with Edward Jr. and some other men on the muddy grounds outside, Mackenzie gets his film off to a showy start, but not necessarily an interesting one. The rest of the film will fall in line directly behind its opening sequence. Everything will look spectacular, the cinematography and actions of the performers will be exceptionally choreographed, and every inch of the countryside will look equally bucolic and inhospitable. The only problem is that outside of the beauty inherent in every frame of Outlaw King, everything that happens is predictable, tiresome, and cliched.

Outlaw King follows the template laid out by Braveheart so strenuously, but without any of the character depth and complexity, that Mel Gibson might be prompted to sue. Once Robert the Bruce is firmly in power over his kingdom – a struggle that was rife with political and religious implications that were actually interesting but is easily resolved in the film – Mackenzie and his team of four (!) other co-writers settle into a predictable groove. There will be a bloody skirmish; the men will rest to bond, and Robert will tell the audience and everyone around him how he feels about current developments; the film cuts to see what the English royals are doing; there will be another skirmish, and repeat the cycle until the credits roll. Outlaw King looks epic, but it has a structure so laboured that one could set a watch to it, but in this case that’s not a compliment. 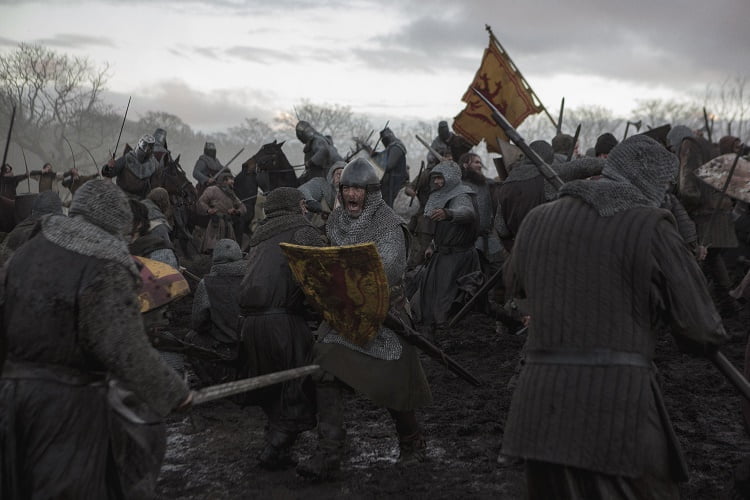 Not too much has been made about this, but since it’s world premiere as the opening night film of the Toronto International Film Festival in September, Outlaw King has lost approximately twenty minutes from its running time, and while I never saw the longer version, I’m not sure that making further cuts before release was the right way to streamline this project. Sometimes during the early and more interesting dramatic moments, Outlaw King has a choppy feel and appearance, with some abrupt edits coming at inopportune times. Mackenzie’s film bears all the marks of a project that has been tinkered with in an effort to get to “the good stuff” a lot faster, but it seems to have eliminated anything that would’ve built character, political intrigue, or the motivations of side characters that initially appear to be integral to the story, but ultimately don’t go anywhere interesting. It might’ve still been less than stellar, but at least Outlaw King would’ve shown a lot more effort in terms of storytelling.

There’s still a lot of effort expended by Mackenzie, his tech team, and the second unit on the film’s admittedly shocking and thrilling battle sequences, particularly the climactic showdown where blood subtly hangs in the misty air like it was part of the natural atmosphere. Outlaw King is at its best whenever the swords are swinging, arrows are flying, and horses are charging, or whenever characters like a spurned landowner (played by Aaron Taylor-Johnson, going over the top in essentially a throw-away role) fly off the handle and go on vengeful rampages. Thankfully these scenes compromise about a quarter of the film, and the “good stuff” rises to the top more often than not.

In the lead, Pine can’t elevate Outlaw King in the slightest. A curious choice to portray a Scotsman and already an admittedly limited performer, Pine’s take on Bruce is largely silent and somewhat mumbling in an effort to keep his dodgy accent as unnoticed as possible. When it comes to showcasing Robert’s rage and strength, Pine obliges, but whenever he’s called upon to appear shocked, vulnerable, or show passion towards his new wife he might as well have a puppet stand-in deliver his lines. He’s all wrong for the part, and seems to be there only because it’s an A-list name that could help Mackenzie get the project off the ground in the first place.

Outside of the aforementioned Taylor-Johnson, who fully realizes that he’s in a Braveheart clone, Outlaw King does have a handful of other supporting performers putting in some good work. Pugh takes what could’ve been the thankless role of a doting mother and turns it into a portrait of a woman who’s stronger than her husband. Dillane gets in a few good rants and verbal jabs as King Edward, but it’s Howle, who’s never been better, that steals the whole show as an entitled, snivelling, power hungry man child with an unfortunate bowl cut. An entire film could’ve been made from the perspective of Robert’s wife and the villains, and it probably would’ve been more more entertaining than Outlaw King.

If all you want from a film of this caliber are gory offensives that look as gorgeous as a painting, you might find a fair bit to like in Outlaw King, but you’ll have to sit through a large amount of boring, uninspired filler to get there. It’s a film about passionate people fighting for a world altering cause that’s made with little fire and gumption. It’s not a career ender or even a side-tracker by any stretch, but it’s a definite misstep for the primary parties involved.

Outlaw King opens on Friday, November 9, 2018 at TIFF Bell Lightbox in Toronto, and it’s available to stream everywhere on Netflix the same day.

Check out the trailer for Outlaw King: