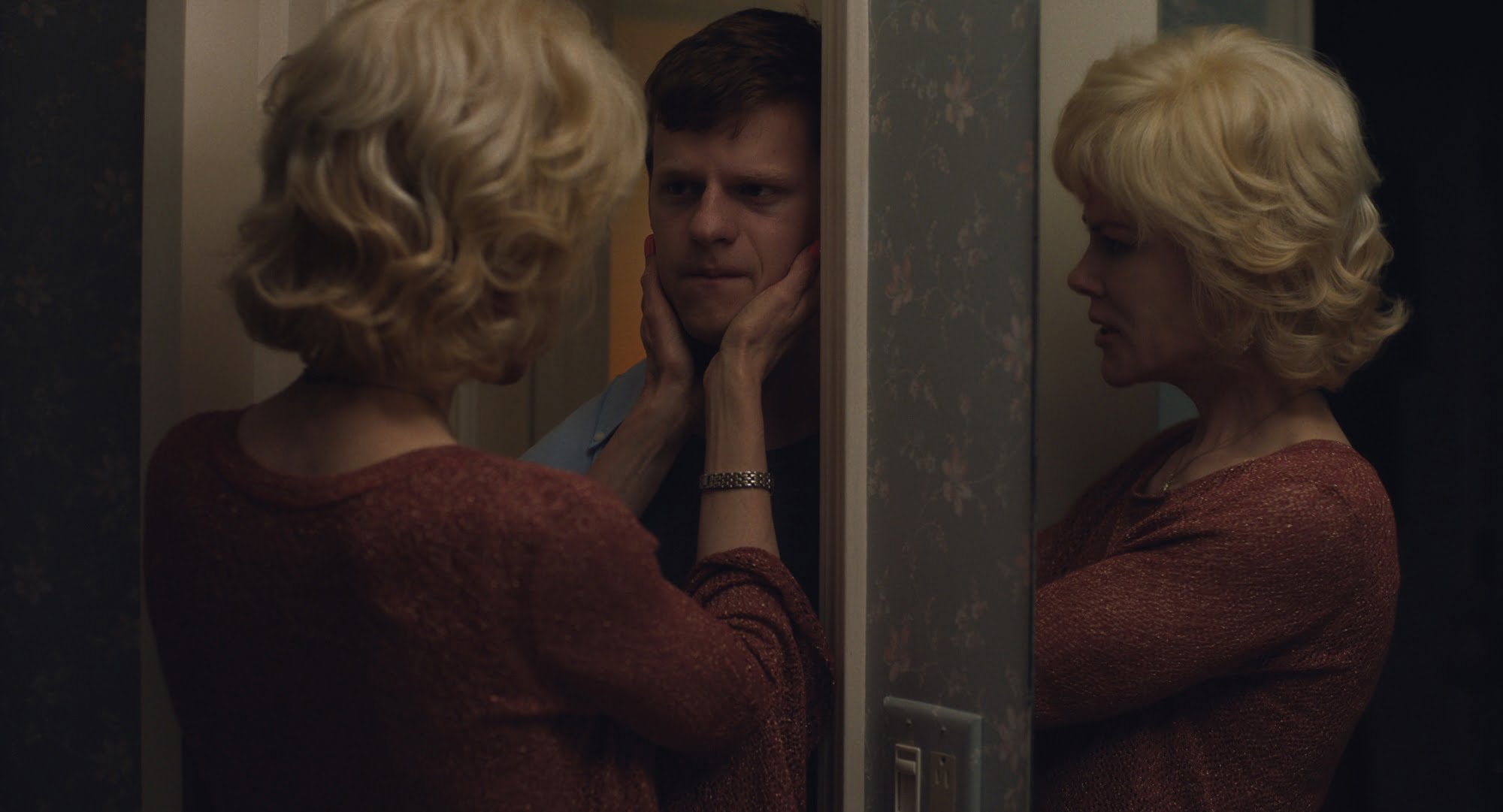 Boy Erased, the second directorial effort from actor and writer Joel Edgerton, takes an uncomfortable and wholly moving look at a young man, full of doubt, who’s sent to an unspeakably awful place to “recover.” Based on the memoirs of Garrard Conley, the son of a devout Baptist preacher, Boy Erased looks at “conversion therapy,” a place where religiously minded people would go willingly or be shipped away to against their wishes in order to “pray the gay away.” While Boy Erased isn’t the first film to tackle such an insidious, uncredited form of “therapy” (and it’s not even the first this year following The Miseducation of Cameron Post), it might be the best look yet into how depressing it can be to feel sexually, emotionally, and socially trapped both inside and out.

Nineteen year-old Jared (Lucas Hedges) lives a pretty decent life in Arkansas. It’s the early 2000s, and he’s recently started attending college. His auto dealership owning father, Marshall (Russell Crowe), is about to become a head pastor at their church, and he’s preparing to give the family business over to his son somewhere down the road. Jared’s mother, Nancy (Nicole Kidman), loves her son more than anything else in her life. Their bonds are tested, however, when an incident outs Jared as being homosexual. He’s pulled out of college, and placed into “treatment” at a conversion therapy centre. After getting to know some of the other young people attending the intensive, lengthy day camp sessions on how to “be a man,” the introverted Lucas begins to realize that he doesn’t have a problem, and that such sessions are doing irreparable harm to those being subjected to them.

While most might think Boy Erased would centre around a person who was forcibly told they had to attend conversion therapy, the most initially shocking aspect of Conley’s story and Edgerton’s adaptation of it is that Jared Eamons (who’s name has been changed in the film) wanted to go in the first place. Raised devoutly to believe that homosexuality fills “a God shaped void,” Jared is initially willing to give conversion therapy a try. Almost immediately, the young man regrets his decision, learning that the treatment is comprised of a bunch of nonsensical busy work, constant invasions of his space and privacy, listening to empty, fearful preaching from the centre’s chief instructor (played by Edgerton), “classes” centred entirely around physical education and etiquette, and the misappropriation of actual therapeutic techniques for the purposes of religious conditioning. Not only is Boy Erased about the insidious nature of conversion therapy, but it’s the story of a perfectly fine young man who’s suffered through a major, life changing trauma being betrayed by the very system he’d been brought up to respect, appreciate, and worship. Jared needs help, just never this kind of help.

Edgerton’s script flashes back and forward in time at various points to double back on key details in much the same way that some people might be hesitant at first to open up and talk about awful moments in their lives. Boy Erased is a purposefully drab, depressing, and colourless film by design because the environment these young men have been thrust into has been calibrated for a complete lack of emotional stimulation, meaning that the only means of escape for Jared are his thoughts and memories, which are painful and fraught in their own right. Boy Erased is built around a specific incident involving one of Jared’s closest confidants (Joe Alwyn) and the fallout that occurs once Marshall finds out about it, but the audience isn’t aware of what happened until later in the film when the protagonist is willing to acknowledge it. By the time that happens, Jared realizes he doesn’t have a problem, and his desperation to leave an almost inescapable system becomes crushing to behold. 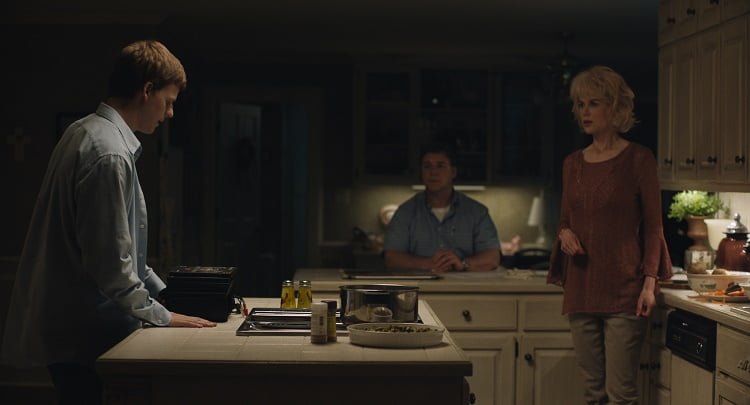 Boy Erased is a film where desperation and sadness permeates every frame. Even brief and fleeting moments of levity come from a place of malaise and self-loathing. These young men are constantly told that they’re embarrassments to their gender, and their sexual orientation is an affront to God. There’s no sunny way of depicting such things, and Edgerton stays true to the disconnected and disenfranchised feeling of living a life that’s been broken down by external forces. The system Jared finds himself a part of is so resolved in its efforts to break spirits that there’s a ludicrous class where everyone has to line up and learn how to properly shake hands. In the film’s most devastatingly tragic sequence, one young man is forcibly made to watch a recreation of his own funeral for backsliding. It’s a story about sexuality, but also a poignant look at the nature of depression and how hard it is to foster a sense of wellness and begin actual recovery from trauma from a hopeless place where people are made to feel worse about themselves instead of better. Real therapy is designed to break people down in order to rebuild them. Conversion therapy is a constant cycle of breaking someone down, berating them further, and praying that they come out of it in the image of the program. Edgerton doesn’t try to overly stylize any of it, allowing the actors and the Conley’s experiences to speak for themselves.

The continually impressive Hedges (in his second of three films to be released this fall, following Mid90s and preceding Ben is Back) proves once again to be one of the best young actors working today, and Boy Erased carries within it his best performance to date. Exceptionally conveying Jared’s emotional and intellectual intelligence, Hedges plays Conley’s surrogate in a handdog, but constantly questioning and skeptical fashion. Although Conley wrote the book and Edgerton has recreated the world the author suffered through, it’s Hedges and his co-stars that have to be the guides to this religious purgatory on Earth. The performance is immersive, but never showy. Jared only raises his voice when he has no other choice, and is desperately trying not to cry or show any signs of weakness, fearing that such emotional outpourings of truth would only lead to further intensive treatment worse than the one he’s already receiving. The moment that Lucas breaks down to his mother (played exceptionally by Kidman, who’s having a great year in her own right between this and the upcoming cop thriller Destroyer) is gutting in its realism, and guided almost entirely by Hedges’ instincts. It’s a massive performance.

While some might take Boy Erased to task for never fleshing out its numerous side characters, one has to remember that one of the main tenets of such a system is to make certain no personal connections and attachments are made. One young man (played by Xavier Dolan) is attempting to get through life without ever making physical human contact again. Another (singer Troye Sivan) is so used to such centres and rhetoric that he’s upset, but ultimately nonplussed by the experience. Even Alwyn’s classmate and the first man Jared develops serious feelings for (Théodore Pellerin) are only known through Jared’s perspective of them, and Crowe’s misguided, bigoted, but non-violent father isn’t demonized because that wasn’t part of the main character’s thought process at the time. We only see what Jared knows to be true. Boy Erased is a film from an honest, experiential perspective, and it’s all the better for it.

Conversion therapy programs still exist around the world, even the one that Conley attended (albeit in a somewhat rebranded and eerily strengthened form that makes the film’s ending all the more curiously depressing), and Boy Erased is the latest film to advocate for their abolition. Conversion therapy holds various degrees of legality in numerous states, and has been advocated for by the Vice President of the United States as something that works. The fact that we need to have conversations about institutions so clearly misguided and wrong is staggering. Boy Erased is the type of film that shouldn’t have to be made in a perfect world, but many will find immense strength and education in its existence.

Boy Erased opens in Toronto, Montreal and Vancouver on Friday, November 9, 2018. It expands to additional Canadian cities on November 16.

Check out the trailer for Boy Erased: