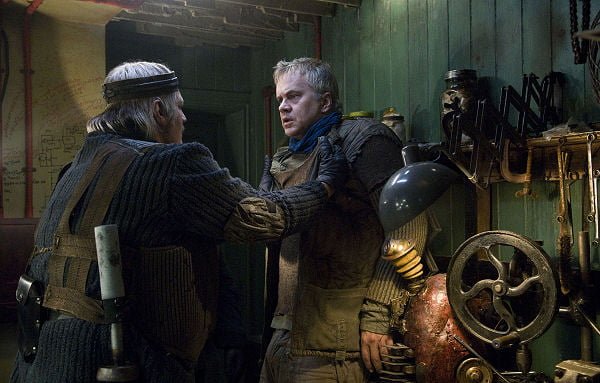 Tim Robbins in City of Ember

The lights are going out and only two kids know what to do about it in City of Ember, one of this week’s new DVD releases. Also out this week, John Cusack stars in the animated Igor, Mark Whalberg does the old good cop/bad cop routine in Max Payne, or get horrified with the original My Bloody Valentine, and Saw V.

City Of Ember
Despite a number of sub-par films by Walden Media, who most notably sucked the life out of the two Chronicles of Narnia stories, City of Ember looked like a promising film to me. Why so promising? Take any dystopian future and drop in a treasure hunt storyline, and chances are, I’ll be hooked.

Plus, the film looked like it might have some plausible special effects, a problem which ran deeply through The Lion, the Witch and the Wardrobe.

Set in a world not unlike our own, the city of Ember is a shining beacon in the darkness below the ground. Founded by humanity to save ourselves from doomsday on the surface, special instructions were locked away for 200 years to eventually release people back into a world that would be safe again.

But when one of the guardians of the secret dies, generations pass before two children will make another attempt to escape the now failing city of Ember.

With the ancient generator dying, which keeps everything in the city running, Doon and Lina find themselves stumbling on secrets that could finally lead people back to the surface. But, so much time has passed that it may be difficult for them to follow all of the clues, and get everything working before the lights go out for good.

Harry Treadaway and Saoirse Ronan star as Doon and Lina, respectively, and do a fine job in the roles. As do the rest of the supporting cast, including Tim Robbins and Bill Murray.

But it’s the film’s mood and style that won it major points with me.

The whole dystopian future angle is played to great effect, although it’s done smartly for a younger audience. The visual style of the film, and the artistic touches, also do much to make the story feel convincing, while providing some great eye candy in the form of machinery, interesting subterranean architecture, and wonderful costumes.

Even with the slightly anti-climactic ending, and a plot that reminds me of Logan’s Run, City of Ember is a very entertaining adventure.

Igor
In this animated monster film, John Cusack plays a would be scientist born into the role of the classic hunchback assistant. Much like Heath Ledger’s character in A Knight’s Tale, Igor gets his break when his master dies just before a big event, but as he works on his big breakthrough, bigger problems mean that he and his friends will have to fight to save themselves from an evil menace.

Featuring a huge list of celebrity voices, including Steve Buscemi, John Cleese, Jennifer Coolidge, Molly Shannon and Christian Slater, the film is a safe bet for families and little ones.

While not all of the jokes are funny, Igor has a unique story, and a lot of fun characters. Steve Buscemi, in particular, is a lot of fun as Igor’s unkillable rabbit sidekick, Scamper.

Max Payne
Is Mark Whalberg talented, and better yet, does he actually have any taste in movies? I’m willing to leave that topic open for debate after watching Max Payne, the latest video game turned cinematic mistake, and the most recent in Whalberg’s long list of bad roles.

Whalberg is our dark hero, Max Payne, a cop continually out for vengence after the death of his family some three years ago. Co-starring Mila Kunis and Olga Kurylenko, this is a film built on angsty dialogue, and moody camera angles.

It’s also incredibly boring, ridiculous, and downright silly. Take, for instance, a film with a character named Max Payne that starts off trying to show you that Max is a regular cop like anyone else, working out of a department somewhere, but he’s also a tortured soul. Frankly, with a cartoon name like Max Payne, you kind of expect the tortured soul bit and hope they’ll pass over the mundane elements for something a bit more exciting.

Nothing much materializes though, making Max Payne a big waste of time.

After a disastrous mining accident in the town of Valentine Bluffs, the sole survivor seeks his revenge and kills the crew members responsible, who had skipped out for a Valentine’s Day party. Warning the town never to celebrate the occaison again, all is well for a long time, until a group of teenagers decides they have gone long enough without a Valentine’s Day make out party. Unfortunately for them, someone turns up who wants to make a point, and promptly starts killing off anyone in sight.

As The GATE’s own Christopher Heard put it, “What made My Bloody Valentine a step above a lot of the lower case splatter entries of the era was a strange atmosphere created by the fact that the film was shot on location in Nova Scotia in a very recently decommissioned mine.”

Adding a bit more of that east coast charm, and amid the blood, “The actors, including such eighties Canadian mainstays as Cynthia Dale and Alf Humphreys, all speak with down eastern accents that also gives the film an exotic other-ness about it.”

Saw V
Saw‘s gruesome, bloody franchise continues with the rebirth of Jigsaw and his evil style of murder. This time out, with everyone else already dead, there is only one person left to carry on the Jigsaw murders, and it’s a police detective who wants to hide his new role in life.

Starring Tobin Bell, Costas Mandylor, Scott Patterson, and Betsy Russell, the film was another hit at the box office, but definitely failed to inspire the same response from critics, who overwhelming panned the film.

As Alex Markerson of E! Online put it, “The death of nearly every character in the franchise isn’t enough to prevent the makers from grinding out another edition of Saw. Could they just finish the job?”