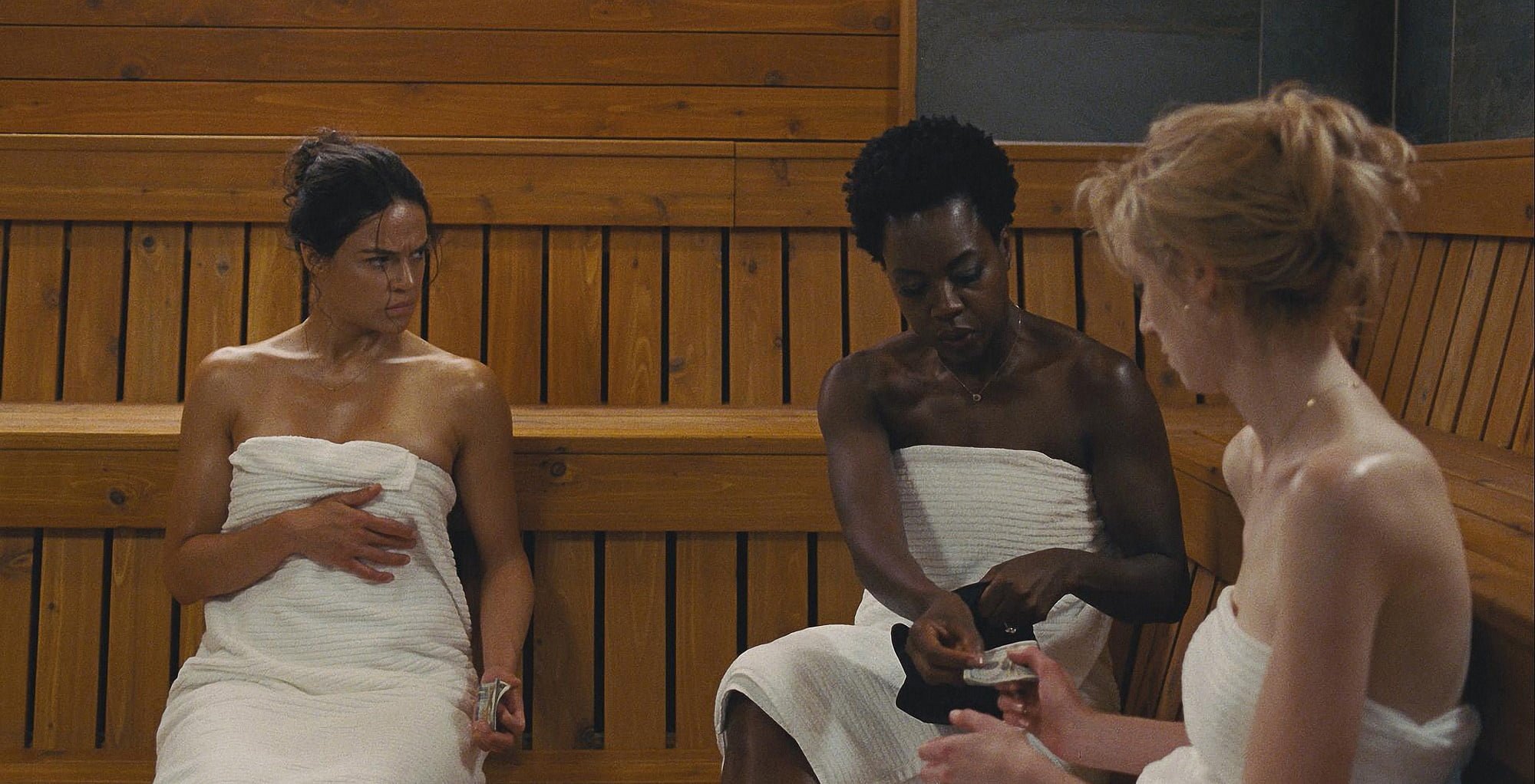 One of the best crime epics of all time, Steve McQueen’s thrilling and richly developed Widows will leave viewers in speechless awe. The most captivating and intelligent examination of the unspoken but ever existent link between crime, race, status, and politics since The Wire went off the air, McQueen’s latest might seem like a curious project for the Shame and 12 Years a Slave director, but it might turn out to be his best work to date. Bolstered by an all star cast, toplined by Viola Davis in her best role to date, and a handful of shocking and suspenseful action beats no one guessed McQueen had in him as a filmmaker, Widows isn’t just a great piece of twisty entertainment, but also one of the finest films of the year.

Although Veronica Rawlings (Davis) lives the life of a socialite, her husband (Liam Neeson) built their comfortable nest egg through his career as a professional thief. After a big score goes horribly awry, killing every member of his crew, it’s Veronica and the spouses of the team members who’ll be forced into answering for their partners’ actions. The money that was ripped off belonged to the election campaign of Jamal Manning (Brian Tyree Henry), a less than saintly gang boss turned inner city politician who’s funding his run for mayor of Chicago with dirty money. Jamal is attempting to unseat a popular, but ineffective and equally crooked legacy politician incumbent, Jack Mulligan (Colin Farrell), who maintains community support and endorsements, but is coming under increasing and unavoidable scrutiny due to some shady accounting. Manning threatens Veronica in her home, telling the grieving widow that she needs to pay back what her husband stole and lost in the botched robbery, liquidate her assets by the end of the month, or face deadly consequences at the hands of his psychotic enforcer brother, Jatemme (Daniel Kaluuya).

Knowing that she can’t come up with the cash on her own, Veronica digs up the plans for what would’ve been her husband’s next big score, hoping to put together a team of her own made up from the surviving widows of other members of the dead crew.  For help, Veronica turns to Linda (Michelle Rodriguez), a dress shop owner and family woman who recently had her storefront repossessed in the wake of the failed heist, and Alice (Elizabeth Debicki), a streetwise woman with a demanding mother (Jacki Weaver), who isn’t grieving the loss of her abusive boyfriend too strenuously. The team is rounded out eventually by Belle (Cynthia Erivo), the crew’s driver, a physically imposing overworked and underpaid hairdresser with a family of her own to worry about. Veronica doesn’t ask the women to help pull off her husband’s final job, she demands it, stressing that if they don’t pay Jamal his money back, financial ruin will be the least of their problems.

Widows opens quite literally with a kiss and a bang, kicking the story off with equal parts poignancy and action and setting the complex tone of events to follow. Adapted and improved from a 1980s British miniseries by McQueen and Gone Girl novelist Gillian Flynn, Widows dexterously balances the intellectual and visceral crowd pleasing elements of a heist thriller with heaps of richly drawn characters and subtext. There isn’t a single moment of Widows that doesn’t feel like being trapped in quicksand that happens to be located smack-dab in the middle of a gunfight. The deeper one sinks into the world of Widows, the more thrilling, dangerous, and complicated the whole thing feels, and Flynn (also delivering some of her best work) and McQueen don’t need to embellish the material all that much with outlandish twists and swerves. There are two big and largely unpredictable twists in Widows – one at the end of the second act and another halfway through the final one – but neither are inorganic or all that outlandish. Within the context of the story, they nicely enhance and subvert the paths of all characters involved while retaining some jaw dropping shock value. These changes in tone and direction – staples of the heist movie genre – probably work as well as they do because McQueen wants to frame Widows not so much as a standard thriller, and more like a sinister sociological game.

There are three teams doing battle in Widows, all with their unique strengths and weaknesses; all of them concerned with status and saving face. The Manning clan has the firepower and manpower to make any problems in their way disappear, but they’re forced to tread lightly, lest they throw away their biggest and most “legitimate” power play yet. Jack Mulligan has the charisma and track record to roll to an easy victory in the election, but he has a stressful scandal of his own looming large over the campaign and a high profile and unrepentantly racist ex-mayor father (Robert Duvall) who’s becoming less of an asset and more of a nuisance and liability. Each leader has their generals to wrangle, and none of them care how something gets done as long as it works out in their favour. They are desperate people with outward appearances and attitudes that barely mask how they’re rapidly falling apart on the inside. 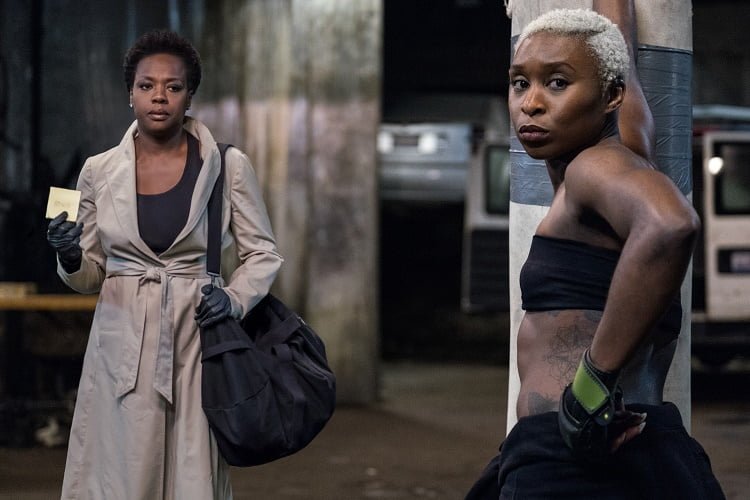 All the leaders and followers have their own motivations, glaring flaws, and hidden virtues that the actors playing them are able to effortlessly convey. Farrell plays his corrupt mayor as a smart, well trained, and relatively young community leader who’s terrible at covering up his obvious misdeeds. He’ll speak privately about his disdain for many of the city’s residents, but he draws the moral line at his father’s bigoted, hardline stances. Henry plays the equally dubious upstart as someone who seems to genuinely want to create change in the community, but he falls back on his criminal past and strongarm techniques to achieve his goals, both of which are easily countered by the incumbent mayor’s political experience and savvy.

In the crossfire is Veronica, played by Davis as one of the hardest heroes to like in recent memory. Veronica’s stress level is always palpable, even when she tries her hardest to maintain the stoic scowl she wears to get her point across. When confronted by a true villain, she sometimes stumbles and awkwardly freezes up. Whenever she speaks to her team of fellow thieves, she rules with intimidation and fear. Veronica’s team needs to come out on top to save their families and livelihoods, but none of the team members are as rigidly focused and merciless as their leader. Veronica treats people horribly out of desperation and will to survive. Davis’ code-switching performance is an acting masterclass, effortlessly shifting between her character’s strong, fearful, and grief stricken sides in a way few performers could ever hope to achieve. Her performance in Widows – a film about sticky moral judgments – summarizes the film in perfect a note perfect microcosm.

None of the side characters find themselves short-changed, either. Rodriguez hasn’t had a role this meaty, nuanced, and vulnerable since her debut in Girlfight. Debicki and Enrivo get wonderful chances to showcases sides of their performing abilities that have previously gone untapped, with the former playing a cunning young woman crawling out from under an oppressive and destructive romantic and family life, and the latter playing the only character in Widows that could be described as an empowered and actually somewhat heroic badass.

Kaluuya, light years away from his impressionable leading turn in Get Out last year, terrifies as a stone cold killer, and Duvall embodies one of the film’s most mercilessly unlikable characters with sadistic privilege. Both are monsters, and both are frightening products of their upbringing. All of these characters reflect the political, cultural, and criminal aspects of Chicago brilliantly, and they all speak volumes to the story’s themes about wealth, inequality, corruption, relationships, race, feminism, and the more fickle and morally fluid aspects of human nature. The city isn’t a character in a cliched sense throughout Widows, but the actual people the story has been built around are children of it in the best and worst ways.

Outside of McQueen’s aforementioned and previously untapped ability to stage action sequences, Widows moves along the same sinewy stylistic lines as the director’s previous efforts. McQueen assuredly hasn’t abandoned his love for aesthetics with this shift into genre fare. He still has an eye for production design that can tell a story (best exemplified by two rival, but powerful local churches, one opulent and wealthy and the other crumbling and borderline decrepit) and reflections cast in floor to ceiling windows. Cinematographer Sean Bobbitt is always finding unique ways of capturing scenes that would’ve otherwise been mundane, like his spin on the traditional “walk and talk” that’s captured from the outside hood of a moving car. Composer Hans Zimmer’s trademark percussions once again prove to be a great fit for McQueen’s blend of the thoughtful and emotionally visceral. Like Veronica, McQueen has pulled together a team of professionals capable of achieving the boss’ vision, while enhancing the film around them when left to their own creative devices.

Widows is a hard film to talk about beyond a certain point without spoiling it, and while the film’s biggest twist will confirm what many in the audience are probably suspecting, it never strikes as predictable because the storytelling throughout is perfect by the standards of most caper films. McQueen and Flynn’s biggest rug pull works because everything that comes before and after it is an embarrassment of captivating details and storytelling riches. Widows is the quintessential combination of a throwback thriller from the 1970s and a gallery exhibition.

Check out the trailer for Widows: