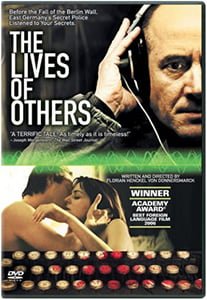 Topping this week’s list of new DVDs is the Academy Award-winning The Lives of Others, by first time director Florian Henckel von Donnersmarck. Starring Martina Gedeck and Sebastian Koch as a couple living in 80s-era East Germany, the film deals with the troubled years when the German government employed surveillance and control over the population through the secret police known as the Stasi. A true political drama, the film has been widely praised by international critics for the way it handles both the politics and the human story.

The first season of TV’s Ugly Betty, which was one of the hottest shows last year, also makes its debut on DVD this week. Ugly Betty: The Complete First Season follows America Ferrera as Betty Suarez, an honest, down-to-earth girl who gets caught up in a stressful career at a fashion magazine. As the brunt of a lot of jokes around the office, it takes Betty’s determination to rough out the jerks and prove herself. A comic gem, and a decent drama at the same time, Ugly Betty has already won two Golden Globe Awards, and Ferrera also won the Screen Actors Guild Award for Outstanding Performance for an actress in a TV series.

Next up, there are two rather cool re-issues. Joss Whedon made his directorial debut with Serenity, which makes it way to DVD again as a collector’s edition this week. The film follows the events after the demise of Whedon’s TV series Firefly, about the crew of a cargo space ship some 500 years in the future. Trouble arrives for the group in the form of a strange passenger who has a very dangerous secret. The collector’s DVD includes extended scenes, new features, commentaries, and more.

The other great re-issue is Paul Verhoeven‘s RoboCop, which celebrates its 20th anniversary this year. Starring Peter Weller as Alex Murphy, the film is set in a futuristic Detroit that’s overcome with crime. When Murphy is brutally attacked, and nearly dies, the police force uses him for a special new program that transforms him into a cyborg cop. With numerous new features on the making of the film, and a slick, new case, the DVD is a must-have for fans of the original film.

Finally, there’s the dud of the week, Perfect Stranger. Starring Halle Berry as Rowena, a journalist intent on discovering the truth about the murder of her best friend, the film lacked any of the depth or intensity you would expect from a real thriller. Co-star Bruce Willis, who plays business executive Harrison Hill, was barely given a chance in the weak plot to stretch his legs, and Giovanni Ribisi ends up playing a creepy, but one-dimensional Miles. Easily one of the worst films of the year.