A perfect example of a film where the style being employed in no way matches the strength of the material goods that went into making it, At Eternity’s Gate nearly wastes a decent story and an exceptional leading performance from Willem Dafoe as legendarily troubled painter Vincent Van Gogh through persnickety directorial touches. Directed and co-written by visual artist and filmmaker Julian Schnabel (Before Night Falls, The Diving Bell and the Butterfly), At Eternity’s Gate takes relaxed and thoughtful material and nuanced performances delivered by a perfectly selected cast and turns the whole thing into an unnecessarily jittery and unfocused misfire. There’s plenty of merit to be found in Schnabel’s latest, but the director, co-writer, and editor proves to be the film’s own worst enemy.

At Eternity’s Gate focuses expressly on what was probably the most productive, provocative, and tumultuous period in Van Gogh’s career. Frustrated by lack of recognition and collaboration from his peers and an inability to sell any paintings – and despite his brother, Theo (Rupert Friend), working as an art dealer – Van Gogh (Dafoe) is looking for a new place to live and experience life. At the suggestion of fellow artist Paul Gauguin (Oscar Isaac), Dafoe travels south in France to Arles. There, he ekes out a meagre, solitary existence, renting out a room and setting about his business or creating in an unorthodox style that wouldn’t gain any acclaim until he was almost dead. During this period, Vincent’s struggles with mental illness would slowly get the better of him, leading to fall outs with close friends, the infamous cutting off of his ear, the assault of a child (who the film basically states had it coming), getting run out of town, and eventually forcing him to spend a great deal of the final year of his life in an asylum.

At Eternity’s Gate is a relatively simple film with a simple goal: to showcase Van Gogh’s art as the product of his struggles. As far as biopic approaches go, At Eternity’s Gate is as stripped down as one is likely to find, but that simplicity and attention to Van Gogh’s humanity is the film’s biggest asset. It’s not too shocking of a revelation that the unorthodox and underappreciated painter’s delicate mental state naturally influenced the way Van Gogh saw the world around him (and in turn, how others perceived him), so Schnabel and co-writers Jean-Claude Carrière (The Unbearable Lightness of Being, The Discreet Charm of the Bourgeoisie) and first time scripter Louise Kugelberg don’t attempt to overplay their hand. At Eternity’s Gate is an attempt to capture one of the world’s most notoriously tortured artists in their element, and all the natural drama that such a concept entails.

It’s a fine jumping off point made all the better by Dafoe’s commitment to the leading role. The actual nature of Van Gogh’s mental illness was never certified, despite his lengthy stays in mental hospitals. It could’ve been severe depression, bipolar disorder, schizophrenia, or psychotic episodes triggered by epilepsy. Dafoe and Schnabel never pigeonhole Van Gogh’s mental illness, and leave it somewhat vague, much to the film and the leading actor’s benefit. Dafoe’s Van Gogh always looks like he’s on the verge of tears, and his emotional swings and breakdowns (most of which aren’t glimpsed in full) could be triggered by kindness, the beauty of the natural world around him, perceived slights from peers, abandonment, or anger. Dafoe uses his own brush to create a portrait of Van Gogh that’s beguiling, empathetic, and deeply humane. There’s never a moment where Dafoe’s performance isn’t tapping into something equally frightening and beautiful about an artist with a mental illness. It’s resolutely honest, and even Dafoe’s co-stars (all of whom are very good, but none of them stick around the film for large patches of time) seem in awe of Schnabel’s lead. 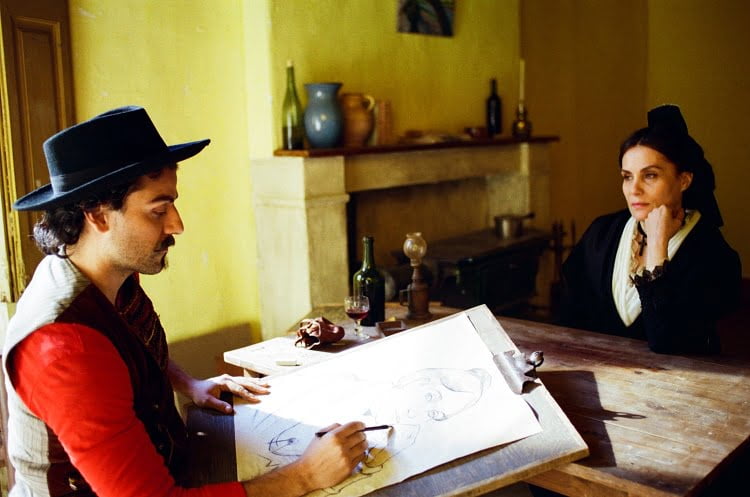 The rest of Schnabel’s film, however, feels like a cheap, overthought forgery. The story, while built around a fully realized character, is skin deep and surface level. The film’s inability to stay on one topic or defining moment for very long in favour of lengthy philosophical conversations carried out between Dafoe and another actor hobbles any true depth from emerging. It’s a deeply personal film for Schnabel, and that’s part of the problem. At a certain point, the film stops feeling like it’s about Van Gogh and instead starts sounding like Schnabel – a controversial and divisive visual artist in his own right – getting a lot of things off his chest.

While Dafoe is capturing Van Gogh’s inner anguish and love for the world around him brilliantly, Schnabel’s fussy material and style is the work of someone who appears disinterested in his own subject. Whenever Dafoe’s Van Gogh sits down across from someone – whether it’s Isaac’s aloof and selfish Gauguin or the likes of Mads Mikkelsen’s attentive priest – the dialogue is akin to a grad school level experimental play where the words coming out of the actors’ mouths sound like the words of the writer, not the characters within the piece. Van Gogh gets into lengthy discussions about how he believes paintings should be composed in a single sitting or why he sees his struggles as biblical in nature, but they never credibly feel like authentic moments from a period piece that wants to pride itself on looking as unvarnished and messy as possible. No one knows for certain if such conversations took place between Van Gogh and others because much of his life remained undocumented until well after his death, but if they did, it’s impossible to believe that they moved and sounded like the one’s composed for At Eternity’s Gate. It will likely rankle those familiar with Van Gogh, but make perfect sense to anyone who has followed Schnabel’s career in the art world.

As for the film’s atrocious visual style, At Eternity’s Gate takes some of the most gorgeous settings, landscapes, and production design of the year and renders them all virtually incomprehensible. Shooting in a shaky, wobbly, seasickness inducing style, cinematographer Benoît Delhomme appears to have strapped a GoPro to a chicken and let it loose in on the set, a choice that isn’t only baffling for a film about a painter living out his final years in a filmmaker’s visual paradise, but one that consistently undercuts all of the film’s most dramatic, moving, frightening, and thoughtful moments. It’s impossible to focus on anything when Schnabel can’t stop screwing with the image. Even simple point of view shots and close-ups look like they were composed by someone who’s about to fall over on a three wheeled skateboard. It’s a style more suited to an mid-90s heavy metal music video, but I think I understand why the choice was made in the first place. Van Gogh and Schnabel both have been accused by their critics for “overpainting,” the use of more brush strokes and colours than most artists would deem necessary. The visual bombast of At Eternity’s Gate seems to be a provocative middle finger towards such critics, but instead of making Van Gogh’s works speak for themselves, once again Schnabel makes this biopic all about the director behind the camera.

At Eternity’s Gate should be remembered first and foremost for containing one of the top five best performances of Dafoe’s career, second for its admittedly delicate and equitable depiction of mental illness, and the rest should probably be forgotten about or glossed over while talking about it. The moments that work here are ultimately outweighed by indulgence and artistic pretensions that don’t fit with the overall subject of the film. It’s the perfect middle ground between a truly outstanding film and a complete misfire, meaning that it ends up being not much of anything at all.

At Eternity’s Gate opens at Varsity Cinemas in Toronto and Fifth Avenue Cinemas in Vancouver on Friday, November 23, 2018. It opens at TIFF Bell Lightbox in Toronto on November 30, and expands to additional cities in the following weeks.

Check out the trailer for At Eternity’s Gate: