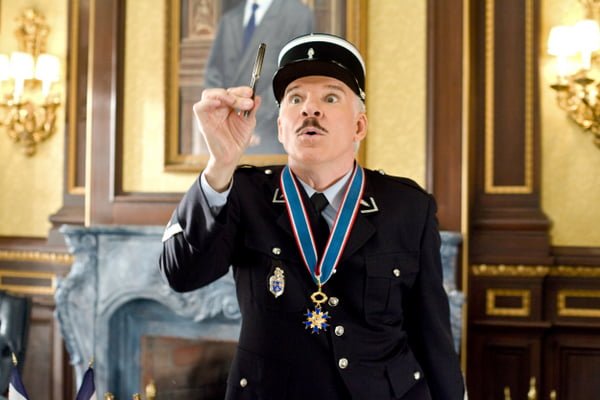 Steve Martin in The Pink Panther 2

Even if you liked Steve Martin in the Pink Panther remake, can he make the role more interesting the second time around? This week in theatres, Martin returns as Inspector Clouseau in The Pink Panther 2. Also debuting this week, Neil Gaiman‘s Coraline makes its 3D debut, the self-help book He’s Just Not That Into You gets a fictional reimagining, and lastly, the terrible tale of the Montreal Massacre is told in Polytechnique.

After Cheaper by the Dozen 2 and the first Pink Panther, it’s getting a bit hard to believe he’s not stuck in a smoking, burning wreck of a career nose-dive.

Coraline
In all the world there are few writers who I admire more than Neil Gaiman (aside from Terry Pratchett). Gaiman’s stories are consistently intense, moving, and all-together spellbinding in a world of what I can only call mostly mundane.

In this stop-motion animated feature, which is based on Gaiman’s Hugo and Nebula award-winning novella, Dakota Fanning voices the part of Coraline, a young girl looking for adventure in what she considers her otherwise dull life. When she discovers a special door, which opens into a parallel world where life is exciting, Coraline may have bitten off more than she can chew.

Directed by Henry Selick, who also brought The Nightmare Before Christmas to the big screen, this is easily my big pick for the week.

Starring Jennifer Aniston, Ben Affleck, Drew Barrymore, Scarlett Johansson, Jennifer Connelly, and Justin Long, the film is a definite girly-flick, which could be a hard sell for anyone but the ladies.

“There’s not much here for men,” wrote Kirk Honeycutt of the Hollywood Reporter, “or for that matter, women who understand that the complexity of human relationships doesn’t reduce to catchphrases.”

Mike Goodridge of Screen International was a bit more positive, calling the film, “an intermittently engaging ensemble which outstays its welcome but contains some peppy performances and amusing observations.”

Polytechnique
Finally, I wanted to mention one Canadian release this week, which may be a bit hard to find, but deserves a note.

Director Denis Villeneuve brings the challenging film Polytechnique to select screens this week, telling the horrific story of the 1989 Montreal Massacre in which a young man killed 14 women on the campus of Montreal’s Polytechnique.

The topic is a tough one, and some critics are calling the film needlessly sensational for a topic that deserves respect, but there is no true consensus yet.

Coming next week, February 13:
Confessions Of A Shopaholic
Friday The 13th
The International