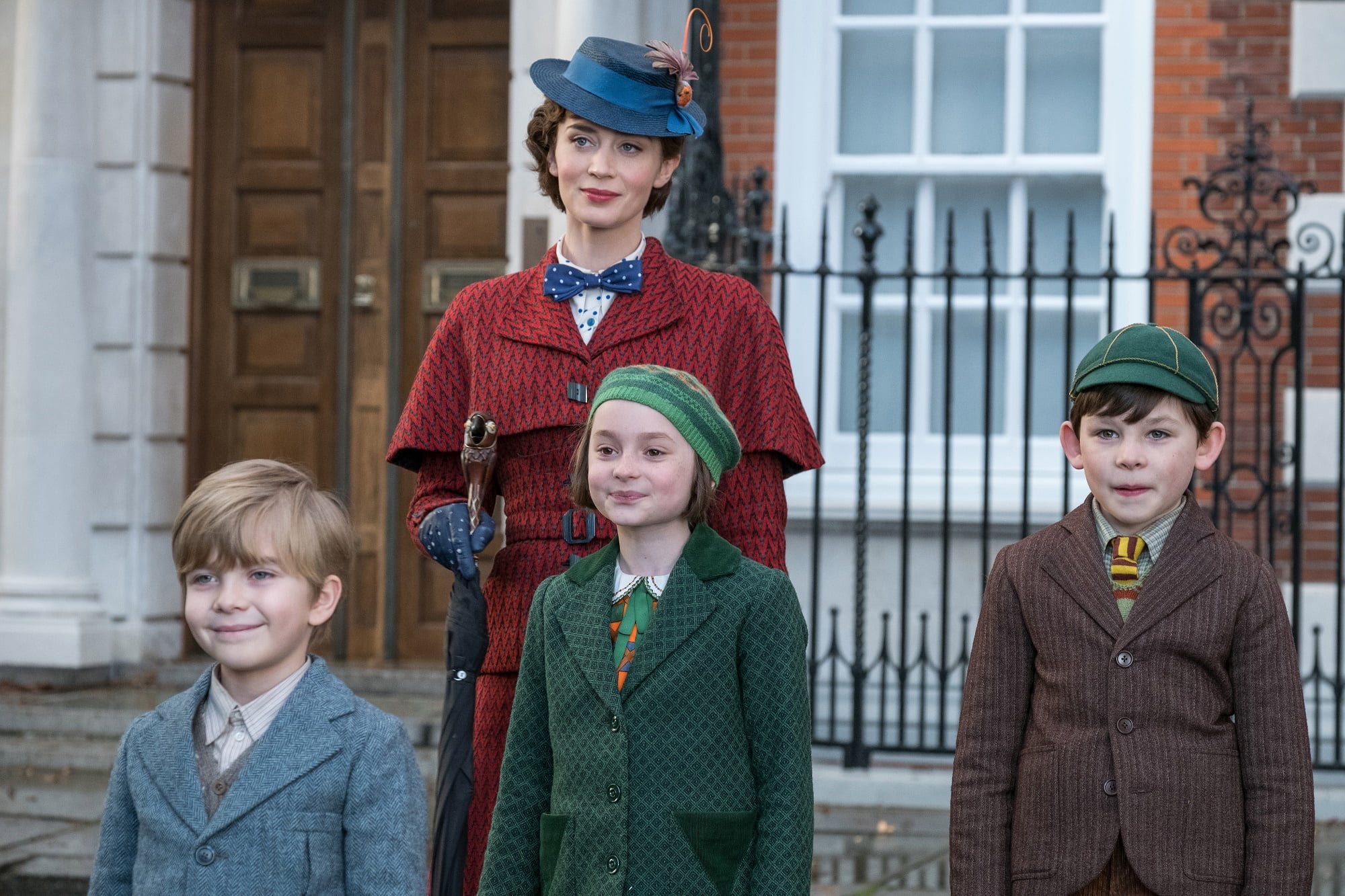 A joyous and somewhat purposefully frivolous reworking and ever-so-slight updating of a Disney classic, Mary Poppins Returns will reignite warm feelings in the hearts of those who adored and sung along with its iconic (but equally overlong and wonky) 1964 predecessor. Effectively capturing the joie de vivre and gently moralistic feel good vibe of the Julie Andrews starring original, Mary Poppins Returns is a sequel to the original in every way and not a reboot of any sort. While the exceptionally capable Emily Blunt takes over starring duties and Rob Marshall (Chicago, Nine, Into the Woods) steps in as director, Mary Poppins Returns feels assured in its overwhelming and genuinely earnest sense of squareness. It’s a throwback in every sense of the term, and for the most part, it works rather well.

Mary Poppins Returns goes back to Cherry Tree Lane in dreary old London, a considerable amount of time after the events of the first film and during an economic depression referred to as “the great slump.” Michael Banks (Ben Whishaw), one of super-nanny Mary Poppins’ original charges, is all grown up and now a recent widower, tasked with looking after three young children of his own (Nathanael Saleh as the eldest son, John, Pixie Davies as middle daughter, Anabel, and Joel Dawson as Georgie, the youngest). Michael’s sister, Jane (Emily Mortimer), a driven worker’s rights activist, pops around whenever she can to lend support, and the family has a housekeeper (Julie Walters, playing essentially the same character she does in the Paddington films) they can barely afford. Michael, who works for the same bank as his late father (now run by Colin Firth, as a duplicitous and underhanded micromanager), discovers to his shock that his own employer is looking to foreclose on the Banks’ home if he can’t pay back an outstanding loan by the end of the week. With Michael forlorn, despairing, and increasingly reserved, Mary Poppins (Blunt) returns on the strings of a kite from her place beyond the clouds to give the adults and children alike piece of mind and some handy life lessons.

The script for Mary Poppins Returns by David Magee (best known for Life of Pi and Finding Neverland, with story assists from Marshall and John DeLuca) takes the “if it ain’t broke, don’t fix it” approach to sequel filmmaking. Outside of substituting labour considerations for talk of the suffragette movement and making some of the returning characters older (or in the case of Mary, younger), Mary Poppins Returns is basically the same movie as the one several generations of families have grown up and old with. Mary arrives in the lives of the Banks children with a similarly imaginative, but every so slightly stern tone and opens their eyes to worlds of fantastical impossibilities. If one were to put Marshall’s film side by side with director Robert Stevenson’s original musical romp, it would be clear to see that the spirit and ethos of Mary Poppins and her overarching point of view remains unchanged.

Full disclosure: I was never a huge fan of the original Mary Poppins film or P.L. Travers’s wildly different series of children’s books. Outside of having it crammed down my throat to a point of near resentment every time a teacher in grade school was too lazy to teach and decided to thrown a movie on (along with the animated Pinocchio, Ben-Hur, and Labyrinth, all of which I became burnt out on at an early age through forced repetition), I just didn’t think it was a great film. The songs were fine (and also crammed down my throat in school as a youngster during mandatory choir practices), but it was far too long and scattered to make much of an impression on me. As a series of old school and visually impressive music videos, Mary Poppins worked just fine. As a film, I always found it a bit of a slog to get through in a single sitting.

I feel more or less the same way about Mary Poppins Returns, albeit somewhat more charitably this time out. On a visual level, Marshall (who also helps out with some of the choreography here) has clearly studied the previous film intently and is keen to include the bits that work best. There’s bit inside a cracked porcelain bowl that blends animation and live action in a similar style to the first movie. There’s a lengthy, show-stopping song-and-dance number where Mary’s closest earthbound friend, a lamplighter named Jack (played by Lin-Manuel Miranda, who’s a natural for this sort of thing), takes the nanny and the kids through a whirlwind tour about his job in the streets of London. Michael expresses his heartache and worry through the power of song. All of these moments come more or less ported directly from the first film, but instead of feeling rehashed and uninspired, there’s something rather charming and earnest about Marshall’s approach. There hasn’t been a musical like this for decades, and such seemingly outmoded spectacle and showmanship comes across as reinvigorating. Each of the musical numbers, while still overly lengthy across the board, are still packed with visual ingenuity that will leave many viewers baffled and enthralled by how Marshall is able to pull it off so well.

The songs themselves are a bit of a different story. While the previous film had plenty of instantly iconic, toe tapping, and eminently hummable tunes, all the songs penned for Mary Poppins Returns sound virtually the same, save for Miranda’s “Trip a Little Light Fantastic” and a storytelling tag-team duet between the actor and Blunt emerging as a must see numbers. They all sound like they belong to the same universe as Mary Poppins, but almost like they’re cast off B-sides. They’re all catchy enough earworms in terms of musicality, but the lyrics aren’t half as inspired as the ones concocted by the Sherman Brothers. Here, the musical numbers are more visually impressive than aurally captivating, throwing the film’s sense of wonderment and otherworldliness somewhat out of alignment. They’re all serviceable enough, but far from being masterworks outside of the two best and brightest numbers. At first, it was curious to see that the Golden Globes were able to give so many nominations to Mary Poppins Returns on the whole, but somehow snubbed one of the most musical pictures of the year out of a nod in the Best Original Song category, but after seeing the film, such a decision makes a bit of sense.

The whole thing is elevated into firm respectability by Blunt, who reaffirms her star power with her showiest performance to date. Commanding the screen and presiding dutifully over the actions as the character should, this Poppins makes full use of Blunt’s dryly witty and borderline sarcastic comedic and musical talents. Delivering gentle scoldings of the Banks children with spoonfuls of sugar and comforting those in need when called upon to do so, Blunt’s performance takes the character a few steps further than Andrews was able to take it decades prior. Mary Poppins Returns needs someone akin to a straight-talking salesman to make audiences buy into its very specific and fanciful brand of whimsy, and there’s no one more suited to the job than Blunt. He chemistry opposite Miranda and the children is spot on, but she never cedes the screen to anyone, capturing precisely the amount of confidence and maternal instincts that the character needs to succeed. Mary Poppins Returns might be a return to form for Marshall (who’s had more than his share of duds), but make no mistake, this emphatically belongs to Blunt, the production designers, and visual effects artists.

Chances are, if you loved the original, you’ll get a nostalgic kick out of Mary Poppins Returns. If you were apathetic about its predecessor, you’ll be slightly less so with the sequel. If you hated Mary Poppins outright, there’s nothing for you here. Mary Poppins Returns counts on the good will people have towards the original to succeed and is most keen on delivering a rousing, if narratively unchallenging follow-up. Is it a necessary sequel? Probably not, but few sequels are. Is it charming and winsome in all the ways that matter most? Absolutely.

Check out the trailer for Mary Poppins Returns: