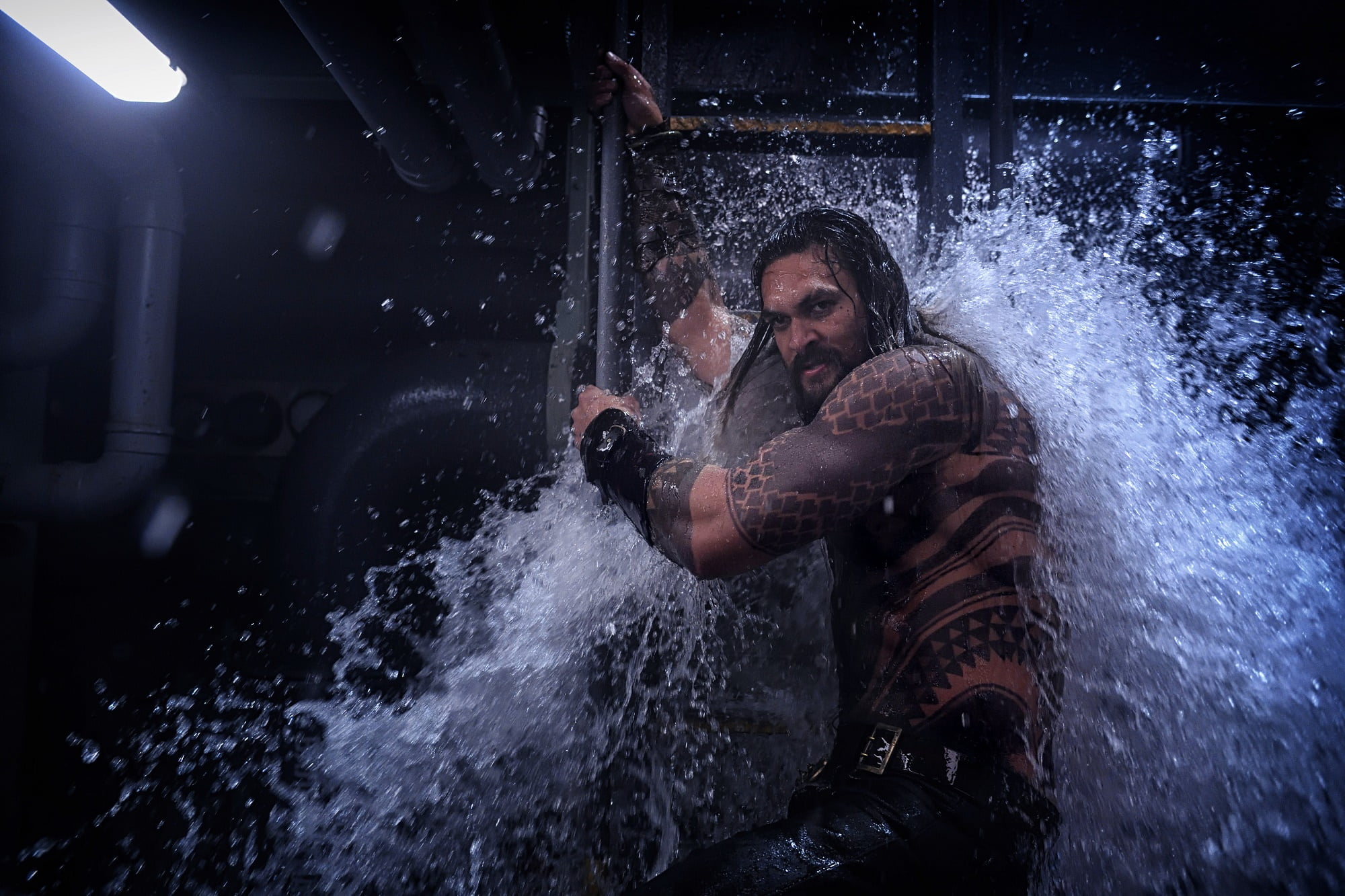 As visually dazzling and inspired as it is refreshingly offbeat and silly, Aquaman effortlessly entertains if you’re able to get on board with its particular blend of genteel corniness and old school blockbuster swagger. If your idea of a good time is a wise cracking, put upon hero attempting to navigate a world populated with drum playing octopuses, sharks with laser cannons strapped to them, armoured sea horses, battalions of crustaceans, and ridiculously dressed side characters who look like they’re prepared to give a speech at any given moment, Aquaman will hit a sweet spot. If, however, you absolutely hate having fun while watching such a motion picture and you demand that all superhero movies should be taken with utmost seriousness and sincerity, you’re in for some rough seas.

Arthur Curry (Jason Momoa) has grown up between two worlds as the son of an unexceptional New England lighthouse keeper (Temuera Morrison) and Queen Atlanna (Nicole Kidman), a “metahuman” from the advanced, but hidden underwater civilization of Atlantis. After escaping her homeland for not wanting to go through with an arranged marriage and having a child with a human, Atlanna realizes that to save the life of her love and newborn son, she must return under the seas, play nice, and provide the king with an heir to the throne. Arthur grows up to be quick, extremely strong, and virtually indestructible; only able to take lasting damage and wounds from Atlantean steel and weaponry. He bounces around his coastal community, righting wrongs and saving folks where he can, and he has little desire to reconnect to an ancestral homeland that took his mother away from him. Things change when Princess Mera (Amber Heard) pays Arthur a visit, begging him to return and unseat his half-brother/her future husband King Orm (Patrick Wilson) from atop the throne. Orm, with the help of a human pirate (Yahya Abdul-Mateen II) who has a deeply personal hatred for the Aquaman, has been concocting ways to get the other kingdoms of the seven seas to join him in an uprising against the wasteful, destructive, and ungrateful surface people. Arthur initially declines, but once he sees the severity of Orm’s capabilities firsthand, he reluctantly agrees to go on a mission to find the mystical Trident of Atlan, a weapon of destruction and peace that could unite the underwater realms with the surface world in harmony.

Aquaman’s intricate, but admittedly uninspired plot line (which starts off like every other epic where someone works towards reclaiming their birthright before morphing into Thor’s good brother versus evil brother story) requires a lot of scene setting and narrative set-up. It’s an origin story not just for Arthur Curry, but also for a visually impressive world that hasn’t been on screen before. It’s a testament to director James Wan (Saw, The Conjuring, Furious 7) and his team of writers that Aquaman never drags and sags when laying out all of its elaborate details. Moving along at a pretty swift clip for something that’s just shy of two and a half hours long, Aquaman never stays in a single place or moment longer than absolutely necessary. Characters will explain some stuff that’s important to the plot, Wan will give viewers plenty of eye candy that will serve to either enhance or distract from some of the script’s self-award goofiness, there might be a fight scene or two, and then it’s on to the next set piece.

I don’t mean that description to sound like a slight in any way. Many directors of effects driven franchise blockbusters adopt a similar template, but it takes a special sort of filmmaker to implement such a playbook to the letter and make it feel refreshing and entertaining. With someone else at the helm, Aquaman could’ve been a hollow head scratcher, but Wan’s boundless energy and imagination captivates as much as his film’s hulking hunk of a star. Realizing that, next to Wonder Woman, Arthur Curry was the most fascinating and engaging personality to come out of the so-so Justice League movie, Wan and his team have created an elaborate underwater sandbox where the characters are free to embrace their true nature without being shoehorned into a larger franchise mythology. Considering that the world of Aquaman is probably one of the easiest superhero realms to openly mock and deride, it’s nice to see Wan and his team leaning hard into what makes the character unique instead of forcing it to conform and become just another cog in the DC Comics cinematic universe. The same approach worked perfectly for Wonder Woman, and it almost works even better here because there aren’t any wrap-around segments here to tie into yet another behemoth team-up. It’s not as great as Wonder Woman, but Aquaman also isn’t as great of a character to begin with.

Aquaman is one of those gargantuan productions where every cent of its budget appears to have made its way onto the screen. Every globetrotting earthbound locale – from the Sahara desert, to the New England coastline, to the island of Sicily – looks positively breathtaking thanks to the efforts of cinematographer Don Burgess, and the underwater realms showcase boundless design ambitions. A mixture of epic Roman structures, Blade Runner inspired skylines, and Tron styled lighting and highlights, the design of Aquaman’s Atlantean settings is an immersive mish-mash of seemingly unaligned ideas that actually works remarkably well. People float or stand in their surroundings, sounding appropriately like they’re underwater, with flecks of plankton and dirt swimming in the atmosphere surrounding them (at least in 3D, anyway), and it’s not hard to believe that this implausible world could actually exist on screen. Aquaman is a hard concept to buy into, but when this much thought and care has gone into its construction, it’s easy to get caught up in the wonderment of it all without asking too many questions. 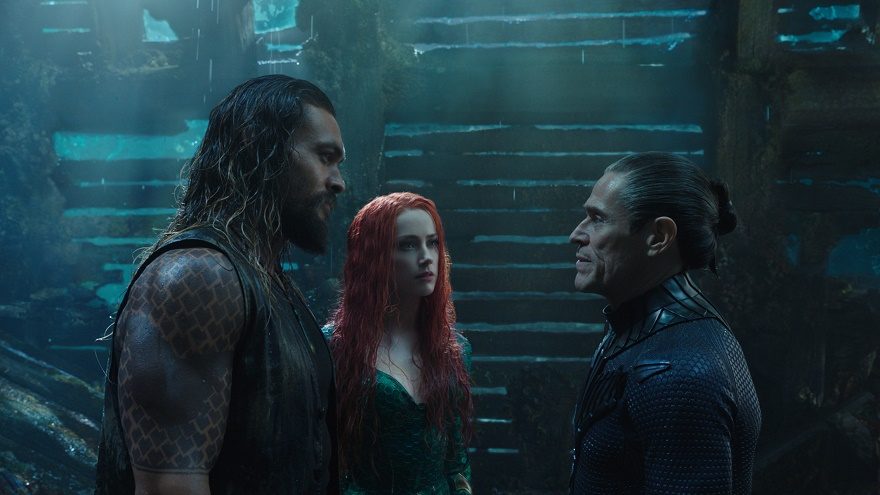 The numerous action sequences are slick and kinetic without being edited into oblivion, set to a catchy, pulsating musical score from Rupert Gregson-Williams that sounds like a collaboration between John Williams and John Carpenter. The MMA inspired bursts of hand-to-hand combat are effectively bone crunching and acrobatic; the next logical step in the evolution of such sequences. Even the action beats that don’t involve Aquaman, Mera, or his mother kicking wholesale ass – like two parallel rooftop chases happening at the same time or a bunch of Atlanteans working together to take out a rogue submarine – are just as captivating. They’re also spaced out throughout Aquaman in tried, tested, and true fashion, giving the audience a respite from the plot dumps every fifteen minutes or so.

Wan brings the same amount of enthusiasm to Aquaman’s set pieces that he did to his entry in the Fast and Furious franchise, and considering that this character should be taken with tongue firmly in cheek and not from a dark and gritty perspective, the director proves to be a perfect fit for such a romp. A jaw-dropping and almost painterly skirmish between Aquaman, Mera, and a bunch of terrifying creatures from underwater trenches is exactly the kind of large scale pop-art action sequence that DC movie producer Zack Snyder hasn’t been able to pull off for nearly a decade. Between Aquaman and Wonder Woman, it might just be time to let Wan and Patty Jenkins run things over there for a while.

With a very specific look and a wry, laid back manner of delivering one liners – suggesting what it might be like if Dwayne Johnson somehow got cast as James Bond – there’s no one better suited to playing Aquaman than Momoa. Aquaman draws upon every ounce of its star’s natural, effortless, and disarmingly charming charisma. Unlike some of his fellow super-powered DC cohorts, Arthur Curry is the only member of the bunch who feels like an everyman in spite of his powers, coming across like a goofy, hard drinking, foul mouthed, and hulking Peter Parker. He wants to help, he’s willing to use his powers to do so, but he also knows where he wants to draw his personal boundaries. His reticence to claim his rightful throne is a nice counterpoint to the opulent spectacle and overkill around him. It’s a classic, roguish hero, and Momoa knows exactly what level of winking cynicism the character needs for the viewer to buy into this world.

Aquaman also boasts a better supporting cast than something at this level probably needs. Momoa has good chemistry – both romantic and comedic – with Heard, whose mystical superpowers look a lot sillier than many of her co-stars, but still seems like she’s having a blast. Willem Dafoe masterfully keeps a straight face as Arthur’s estranged Atlantean mentor, Vulko, a character that has to provide tons of exposition while working as a double agent within King Orm’s court. Kidman also brings just the right balance of camp and warmth to her role as Arthur’s mother.

But if the heroes are well drawn and cast across the board, it’s the villains of Aquaman that provide more of a stumbling point and less originality. While it’s brilliant that King Orm’s plan to get back at the surface world means throwing all the garbage and war machines they dumped into the oceans back onto land, Wilson’s still stuck with a character that’s a less flashy version of Tom Hiddleston’s Loki from the Thor movies. Similarly, while Mateen makes a major impression as the revenge driven Manta, his character comes across as a lukewarm retread of Michael B. Jordan’s Killmonger from Black Panther. Both actors are fully capable of doing exactly what the script requires of them, but for a film boasting so much innovation, its villains are somewhat of a letdown. However, there is a nice, but only vaguely villainous role for Dolph Lundgren (who’s having a career renaissance as of late between this and Creed II), as a skeptical, but willing participant in Orm’s dastardly plans. He seems like the more interesting antagonist, and one sometimes wishes Momoa were facing off against Lundgren instead.

Aquaman is the kind of superhero romp and spectacle that won’t be to everyone’s taste. On the way out of the screening I attended – one packed with comic book and superhero movie buffs – I heard just as many grumbles as I did compliments. Personally speaking, Aquaman isn’t my favourite kind of superhero movie, but one that I would vastly prefer over something dark and brooding or blandly heroic and competent. Aquaman pushes itself at every turn to be bigger, brighter, and bolder than anything that has come before it, and even if the whole thing is a bit daft, it’s confident and usually successful in its aims to entertain. It’s an unabashed popcorn movie that gives further hope that the minds behind the big screen DC Comics adaptations have righted their ship and sailed out to calmer seas.

Check out the trailer for Aquaman: