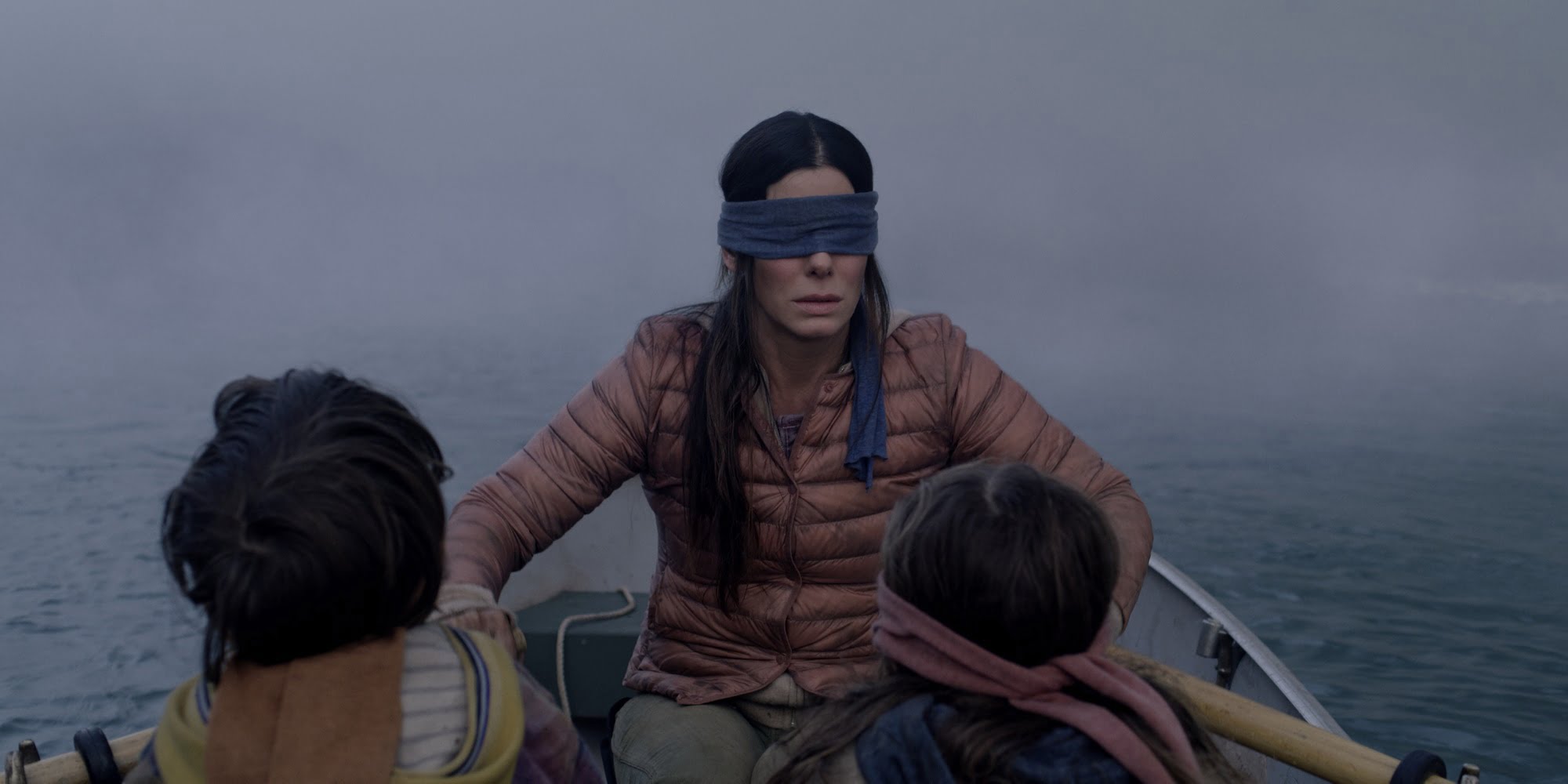 Bird Box is the type of apocalyptic horror thriller that has positively nothing stimulating or original to say, despite expert direction and an astoundingly overqualified cast doing everything in their power to wrestle something this tiresome and done to death into respectability. If you’ve seen any film where a mismatched group of survivors has to band together to understand and survive an unpredictable and ever growing extinction level event – from Night of the Living Dead to The Mist to The Happening to A Quiet Place – you’ll know every single thing that happens in Bird Box from the moment the plot kicks into gear, and no amount of great direction or nuanced performances will distract from the fact that this has all been done so many times before that I’ve lost count, and that it has been done a whole lot better.

Malorie (Sandra Bullock), a visual artist, is pushing forty and about to give birth to a child as a single mother. It was her idea to have a baby, but she’s not even sure she wants such a responsibility, thinking that she’s obliged by society to put her maternal instincts to good use, and partially because she’s just really lonely. Not long before she’s due to give birth, hell on earth breaks out when a mysterious, unseen force starts hypnotizing people and forcing them to kill themselves. As chaos reigns in the streets, Malorie is rescued by a contractor (Trevante Rhodes) and brought inside a home where a small group of survivors with various temperaments are holed up. There’s the kindly gay homeowner (BD Wong), a perpetually uppity and entitled alcoholic neighbour (John Malkovich) who trusts no one and instantly resents Malorie because his wife died trying to save her, an old lady (Jacki Weaver), a cop (Rosa Salazar), a drug dealer (Machine Gun Kelly), and a grocery store clerk (Lil Rel Howery) who’s also a conspiracy theorist and budding genre writer. Eventually, they’re joined by another frightened and very pregnant young woman (Danielle Macdonald) and a mysterious stranger (Tom Hollander) who warns that some victims of this unseen force have turned homicidal rather than suicidal. This psychological plague only affects the people who look directly at it, meaning that the survivors have to keep the blinds closed at all time and come up with creative ways of leaving the house to gather supplies.

I’m already skipping over a huge portion of why Bird Box stumbles out of the gate and limps around for over two hours on broken legs, and I’m not just talking about the fact that the idea of an unseen force driving people to suicide is literally the set-up for The Happening, or that the idea of not looking at monsters is the exact inverse of A Quiet Place’s “don’t make any noise” plot device. Before this latest effort from renowned Danish, Oscar winning, and recently slumping director Susanne Bier (In a Better World, Brothers) and hot, rising screenwriter Eric Heisserer (Arrival, Lights Out) even establishes its characters, we’re told that all of the main action takes place in flashbacks. Bird Box opens and keeps cutting back to Malorie’s attempts to ferry her two young children, literally named Boy (Julian Edwards) and Girl (Vivien Lyra Blair), to a secured and safe facility at the end of a treacherous river; a trip they will have to make while blindfolded and with only a pair of birds in a box that can signal to them whenever dangerous forces are nearby.

From the start, it’s known exactly where the bulk of Bird Box is going to go through the simplest of observations that a four year old could make and basic process of elimination. There are so many characters in Bird Box that it feels cluttered, and yet, we can’t care about a damn one of them other than Malorie because their fates are all but sealed from the second we lay eyes on them. Heisserer might be adapting a novel by John Malerman that might be following a similar structure, but I rarely see films shoot their stories in the foot so spectacularly from the very first scene as Bird Box does. 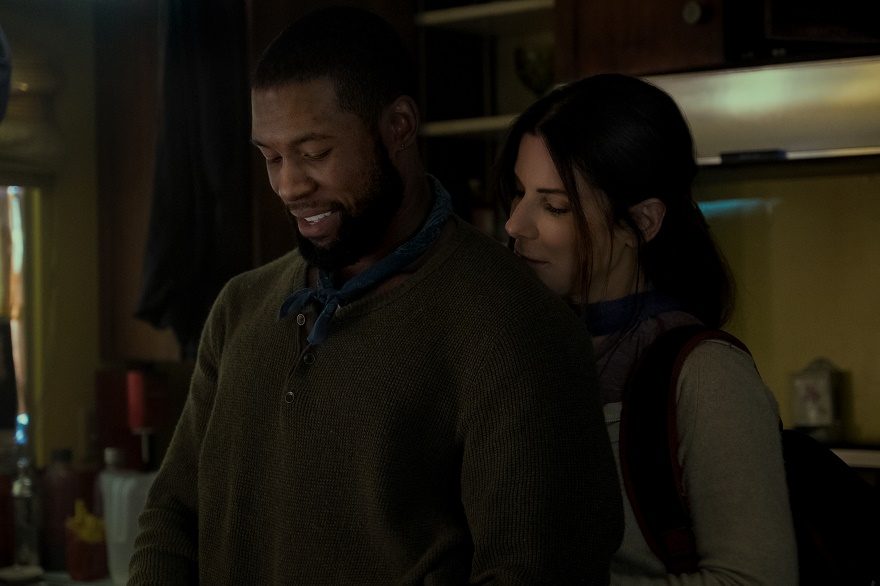 Bier can certainly make sequences that appear tense in a vacuum, and the film looks fine enough (with some great, atmospheric shots throughout and nifty sound design), but the material she’s given here is hackwork in the extreme. From scene to scene, Bird Box cycles through ideas, jump scares, characters, and themes that have been copied and pasted from a number of successful and unsuccessful movies that have come before it. Tonally, Bird Box is a lesser version of The Mist and a more self-serious version of The Happening. The idea of not looking at something that could kill you is from any number of stories about boogeymen, and the large scale destruction of cities and towns is eerily reminiscent of Dawn of the Dead and 28 Days Later. Eventually, as the apocalypse evolves, Bird Box adds The Grudge, The Purge, and The Crazies to its list of films to rip off, and instead of watching the action ramp up (which is impossible, anyway, since we know where this is all leading from the opening scene), it only grows more monotonous and uninspired. It becomes somewhat painful and pathetic, leading to a twist ending that’s admittedly novel, but it comes at the end of an already ridiculous film, meaning it will likely become parody fodder almost instantly.

Credit to Bier, though: she does direct the hell out of this and gives all of her energy to a patently losing cause. Bird Box employs maximum effort into trying to trick viewers into thinking they’re seeing something new, fresh, and suspenseful, but outside of the scene where Malorie is rescued and brought into the house, none of what happens is kinetic or original enough to make pulses quicken. One can only do so much with a script that feels like it was created using one of those “I forced a bot to watch a thousand hours of something” memes, and there’s nothing that Bier or anyone else can do to counteract the drabness of it all.

The cast emerges from this more or less unscathed and with some amount of goodwill. Bullock makes for a nice lead, and the icy nature of her character throughout nicely runs counter to traditional heroine cliches, even if she’s ludicrously overqualified for this kind of stuff. Rhodes gets the second juiciest role as the only truly nice, level headed, and competent member of the household, and he brings some much needed warmth and charm to a film that’s otherwise bereft of such feelings. Malkovich could play this kind of uppity asshole in his sleep, but thankfully he’s wide awake for his performance here. Everyone else is largely expendable, interchangeable, or useless, but the actors are all fine when it comes to doing exactly what this dog’s breakfast of a script asks of them.

Bird Box is the type of film that should only be watched if you’re researching apocalyptic thrillers made between the 1960s and today, and you only have time to watch one mess of a movie and not eight or nine genuinely exceptional ones. There’s no good reason for Bird Box to exist, but it’s also made with an undeniable amount of technical and performative craft. That overall competency makes it palatable, but no less boring and risible. At least it has something going for it. If not for Bier and her cast, Bird Box would be the most superfluous thriller of the year.

Bird Box is available to stream on Netflix starting on Friday, December 21, 2018.

Check out the trailer for Bird Box: