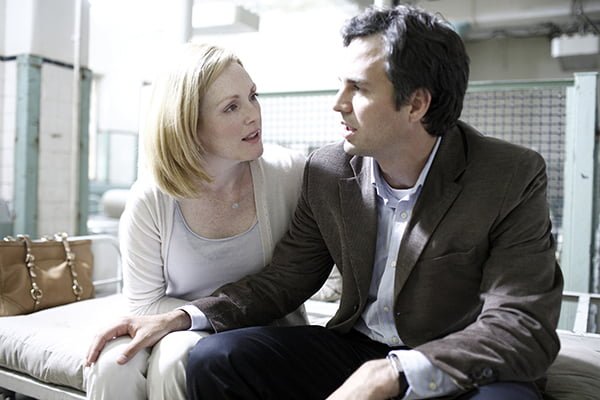 This week, a mysterious plague sweeps across a city in Blindness, starring Julianne Moore and Mark Ruffalo. Also on DVD, Oliver Stone‘s W. takes a look at the life of former U.S. president George W. Bush, Spike Lee‘s Miracle At St. Anna looks back at World War II “Buffalo Soldiers,” Diane Lane and Richard Gere star in the romance Nights In Rodanthe, and Bruce Campbell directs himself in My Name Is Bruce.

Blindness
In what I would call one of the more challenging films of 2008, Julianne Moore stars in this dark drama about a lone woman, unaffected by an epidemic of blindness spreading across a massive, International city. As the strange plague sweeps across the city, society begins to crumble, and we follow the lives of a group stuck in the madness.

Beginning with one man who loses his vision in his car, the blindness spreads through a series of people he comes into contact with. We never know their names, but once they are quarantined, their numbers swell. Throughout the growing insanity, Moore’s character, known as the Doctor’s Wife, acts as a beacon for her husband, played by Mark Ruffalo, and their extended group of new friends.

This odd, but compelling film also stars Don McKellar, Danny Glover, and Gael García Bernal in an exploration of society gone insane. The mesmerizing visual style, painted by an overall soft focus and washes of white, is marred only by the film’s ongoing need to bash the audience over the head with allegorical wisdom, even as the blandly paced film marches on.

Director Fernando Meirelles paints vivid pictures in this dark, and mildly comic film, but it is a tough film to admire, even if the viewer’s eventual payoff is being able to look at the world in a slightly new light.

W.
American film legend Oliver Stone has taken on numerous subjects with both style and substance, but in his latest film he tackles the story of one of the most discussed, and mocked figures in modern history: former U.S. President George W. Bush.

Starring Josh Brolin as W., Stone paints an all-too-accurate portrait of the man responsible for the Iraq invasion. Delving into his past, and based on documented facts about Bush, the film examines the once-American President’s life next to his father, his relationship with his wife, and his faith.

Brolin does a fantastic job as Bush, even if he looks very little like the actual man, but the story is such a broad overview, it hardly says anything interesting about him.

Where Saturday Night Live and scores of other shows have at least contributed something to the legend of the man through comedy, Stone seems content with just covering the facts, when audiences seemed to want a down-and-dirty attack on his character.

The ending does seem to sum up the man though, in a way that captures both the core of the man, and the public image he represented in office.

Miracle At St. Anna
The incredible, and often controversial director Spike Lee delivers his latest film about a group of “Buffalo Soldiers” stationed in Italy during World War II.

Spread between two timelines, Miracle At St. Anna is the story of these soldiers trapped behind enemy lines, and years later what happens to one of the surviving men who is being investigated for shooting someone.

Based loosely on real stories from WWII, and James McBride’s novel, the film explores the bonds between the soldiers while also examining how black soldiers were treated during the war.

Nights In Rodanthe
Based on the Nicholas Sparks novel, Nights In Rodanthe has Diane Lane and Richard Gere teaming up for the third time in a story of two lonely people, thrust together during a storm in North Carolina.

With Gere playing a distraught doctor trying to escape a recent mishap, and Lane as an innkeeper dealing with a failed marriage, the film lays on the schmaltz with reckless abandon.

The duo are good together though, and they turn in good performances, but the script and direction offer very little aside from what we’ve seen in scores of other romantic dramas.

Directed by Campbell, the film also stars the B-movie legend as a caricature of himself, kidnapped and brought to a small town where the locals discovered the Chinese god of war lurking in their cemetery. The demon has come to deal out vengeance to the ancestors of those responsible for the deaths of numerous Chinese miners from long ago, and they hope that Campbell can somehow save the day.

Campbell is no hero though, and when he finally realizes that the demon is real, he turns tail and runs for the hills, leaving one teenager to deal with the god of war.

For the fans who can’t get enough of Bruce Campbell, My Name Is Bruce is a joke-filled tour through Campbell’s career of pithy one-liners and cool characters, not to mention a satirized version of himself.

As a vehicle for the star, it’s also a fun one, at least in the sense that it gives Campbell free reign. But this is just the type of film that only a fan can really enjoy. Anyone else would be better served watching Evil Dead, Army of Darkness, and then, as the film so aptly puts it, Bubba Ho-Tep, since “Everyone liked Bubba Ho-Tep.”