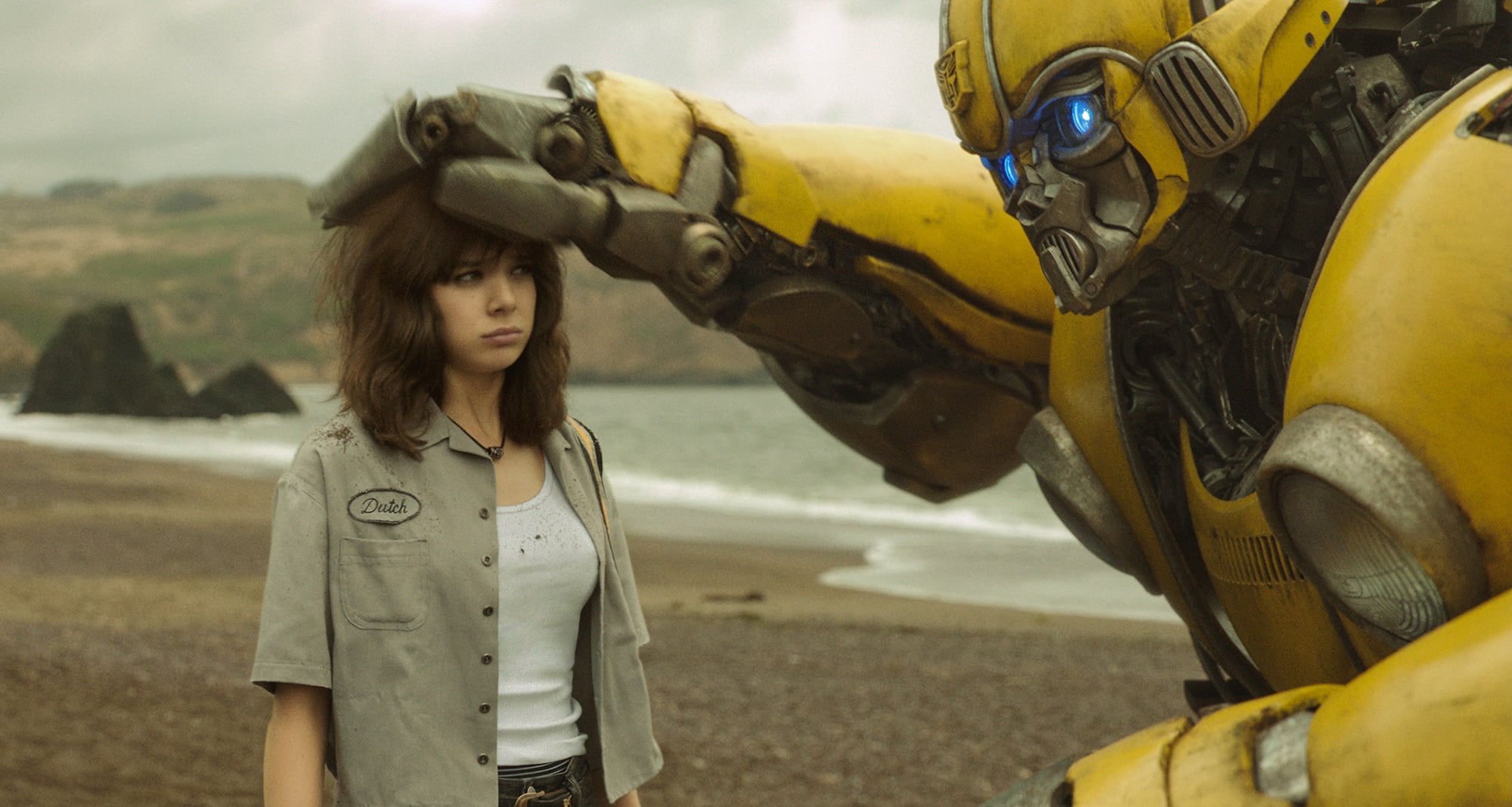 Charming and heartfelt in ways that most people wouldn’t associate with a Transformers movie, Bumblebee won’t be mistaken by anyone for high art or essential viewing, but it’s a pleasant enough blockbuster prequel that will please family members of all ages equally. While still a bit off kilter, overstuffed, not terribly original, and leaning perhaps a bit too heavily into nostalgia for cheap, crowd pleasing pops, Bumblebee remains the best film in the belaboured and slumping franchise; fixing a bunch of problems that producers hopefully take note of for future installments and adventures.

All eighteen year old Charlie Watson (Hailee Steinfeld) wants for her birthday, other than acknowledgment from her widower mother (Pamela Adlon) and try-hard stepfather (Stephen Schneider), is a car. Raised to be a bit of a gearhead by her late father and working a thankless summer job at an amusement park concession stand, Charlie is willing to take basically anything as long as it runs. While scavenging for parts at her uncle’s junkyard, she’s immediately taken by a rundown Volkswagen Beetle. Her uncle (Len Cariou) gives her the pile of junk as a gift, but the second she gets it home, Charlie is stunned to find out her new ride is actually a giant robot in disguise. B127, or Bumblebee as she likes to call him, has been lying low on earth after the fall of his home planet Cybertron to the evil Decepticons left his fellow Transformers scattered throughout the universe. After having his voice box ripped out and his memory circuits damaged, Bumblebee is confused and scared by the new world around him. Charlie does her best to keep her new car’s secret identity a secret and help her new friend the best she can, but the robot’s awakening catches the alarm of a pair of Decepticon enforcers (voiced by Justin Theroux and Angela Bassett) who are willing to manipulate members of the United States armed forces into thinking that they’re the good guys and that Bumblebee is a dangerous fugitive.

Set in 1987, Bumblebee is keen to take its story of warring robots back to where the phenomenon that created it all began. On one hand, it’s an excuse for a bunch of gags, one-liners, and pop culture references that will keep adults who grew up on the cartoon and toys that inspired it happy and satisfied, but it also proves to be a useful shift in perspective that allows the franchise to get back to basics. Although he’s still credited as a producer, Bumblebee is so far off from Michael Bay’s more recent live action Transformers movies that it’s virtually unrecognizable. While Bay’s Transformers entries are soulless exercises in destruction and noise, Bumblebee might not be an original idea for a film, but at least it’s trying to be about something rather than merely existing for the sake of making a quick buck.

Bumblebee is the latest film and first live action feature from Travis Knight, one of the lead animators and guiding forces at Laika stop motion animation studios and the director of Kubo and the Two Strings. Following an opening depicting the chaotic fall of Cybertron that tantalizingly suggests what a Laika animated Transformers movie might look like, Bumblebee’s script from writer Christina Hodson (who after working on Shut In and Unforgettable delivers the best produced work of her career with this) settles into a comfortable groove that carefully balances set pieces and tender moments with care and an aim to keep everyone in the audience equally entertained. Whatever one might want from a Transformers movie, Bumblebee seeks to give it to them on a basic level, and the material fits nicely into Knight’s growing filmography. 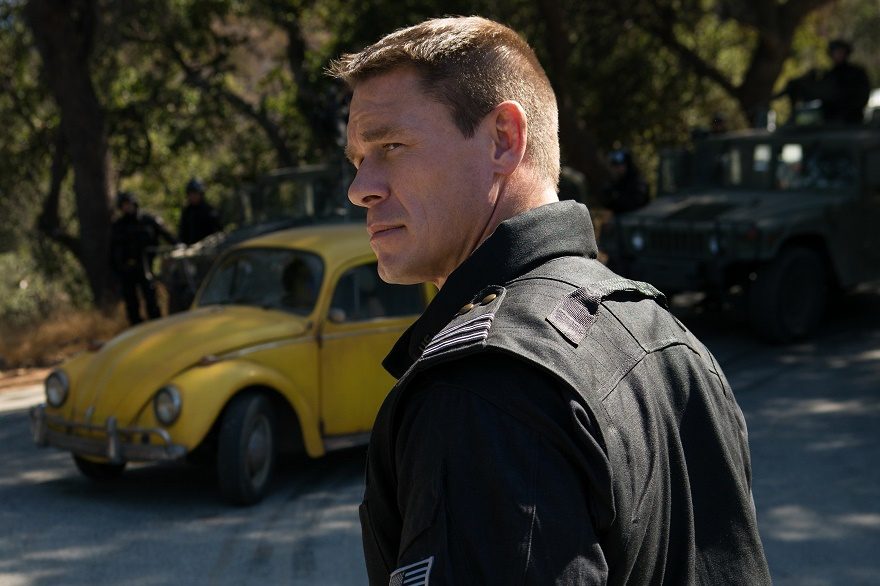 Not all of Bumblebee works, with the characters and plotting standing out as the biggest inconsistencies. While Charlie is a likable enough main character and Steinfeld is the perfect young performer to anchor such a tentpole blockbuster, everyone around her seems to bend to whatever whim the script needs them to skew towards. John Cena appears as a military operative and squadron leader who initially seems like he’s going to become the villain, before growing skeptical that Bumblebee has done anything wrong (getting probably the biggest laugh the entire film has in the process when he questions John Ortiz’s blissfully unaware scientist), and then going right back to being a jerk. Cena’s fine in the role, but the character flip-flops a few times too many. Still, it’s better than an underbaked, distracting, unnecessary, and painfully dull romantic subplot between Charlie and the shy, nerdy kid next door (Jorge Lendeborg Jr.), a character so uninteresting and useless to anything that’s going on that he threatens to evaporate in every scene, except for one where the teens try to teach Bumblebee how to toilet paper and egg a mean girl’s house. Charlie and Bumblebee are solid characters to build a story around, but everyone else is all over the place.

The 80s references are also a bit much, and more of them miss than hit. There are a few chuckles to be had about Alf being appointment television viewing, the sheer number of band shirts Charlie seems to own, Judd Nelson’s fist pump at the end of The Breakfast Club, and nods to the Transformers animated film and a throwaway Go-Bots gag that will leave fans of the old school series in stitches, but overall they feel like they exist for the sake of being there, not for any particular function. Bumblebee might actually be trying to be too many different 80s movies at once, bouncing back and forth between a John Hughes styled dramedy, an inspirational Karate Kid story, a WarGames indebted thriller, or a Short Circuit high concept comedy. All of this overcompensating seems to be masking the fact that what Bumblebee really wants to be is a sillier updating of a more successful late 90s movie: Brad Bird’s The Iron Giant. The constant nostalgic rib poking sometimes leave Knight and company with little breathing room for their story, but I’m sure that this type of winking and nodding will have some appeal to a large number of viewers who are simply grateful to have a Transformers movie that isn’t mean spirited, and that the crisp and fluid action sequences don’t look like they were edited by a two-year old attempting to assemble a 100,000 piece jigsaw puzzle.

Knight keeps things under control thanks to his keen sense of pacing and use of Bumblebee as a sort of silent movie comedian. The sequence of childish revenge mentioned previously and another bit where Bumblebee sheepishly tries to explore Charlie’s house while the family is out are charming and genuinely funny. Steinfeld and Cena play well opposite their digitally created counterparts, and sell the absurdity of their situations nicely. Everything here is rather lightweight, but it isn’t totally empty and more frequently entertaining than not. It creates a low bar for itself to clear (which says a lot considering the bar for the rest of the franchise is hovering somewhere around the earth’s core), but as a piece of stocking filling holiday entertainment, Bumblebee is a sweet enough concoction that kids and parents alike can enjoy guilt free.

Check out the trailer for Bumblebee: