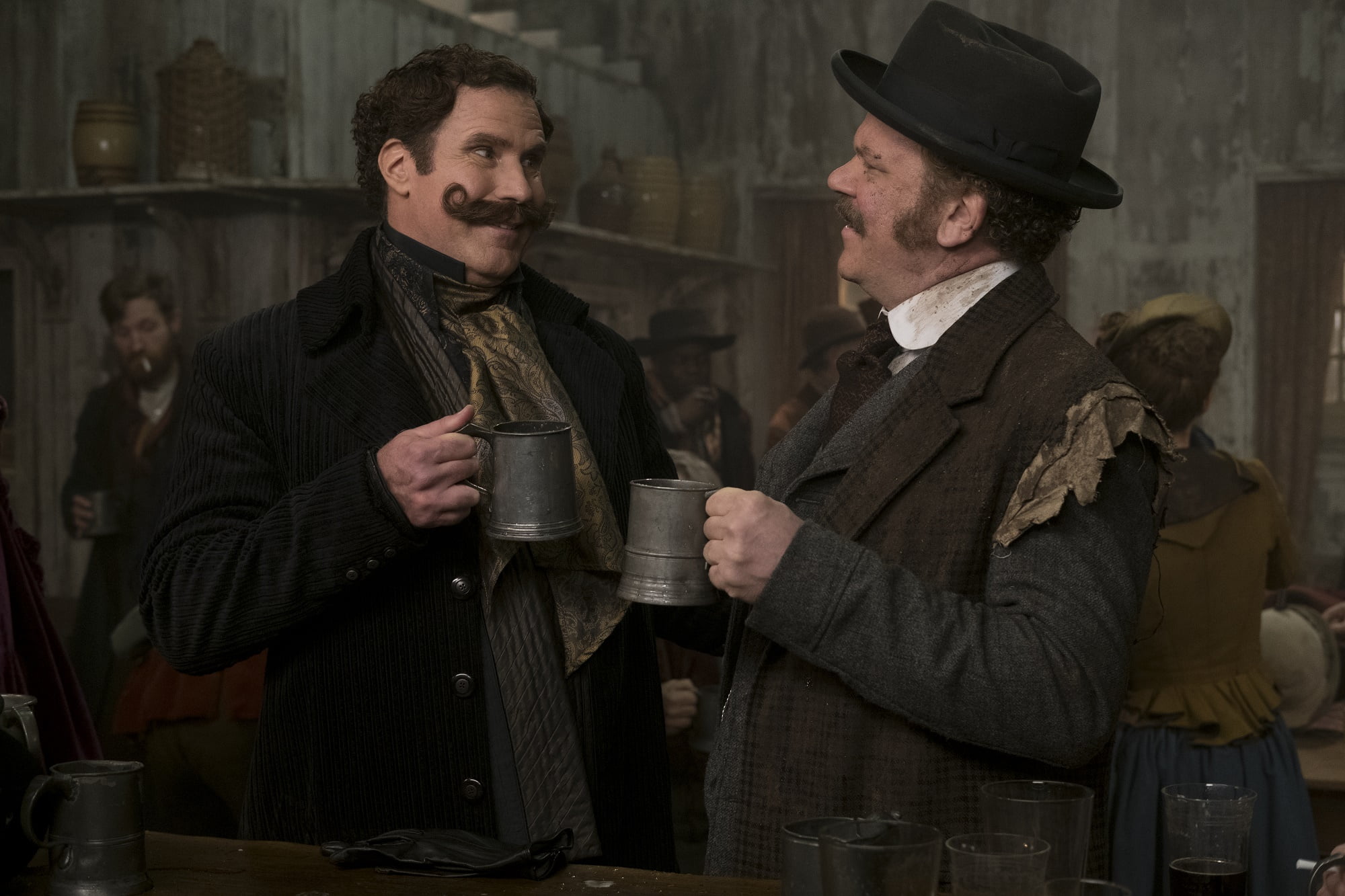 Nowhere near as inspired, zany, or hilarious as one would expect from its cast and premise, Homes & Watson (which wasn’t screened in advance of its Christmas Day release for reviewing press) has a few light chuckles and an overwhelming and frustrating amount of missed potential. Casting the proven comedic duo of Will Ferrell and John C. Reilly as beloved literary crime fighters Sherlock Holmes and Dr. John Watson sounds like a can’t miss formula. Having seen Holmes & Watson, I assure you that even a sure thing can fall flat, but none of it is the fault of its still fully capable leading stars.

Holmes (Ferrell) and Watson (Reilly) have been chums since primary school, where a picked on Sherlock found a way to hide all of his emotions away and punish his bullies through his powers of deductive reasoning. Fast forward to the early 1900s, and both are established and revered criminal investigators, much to the chagrin of the local constabulary (led by Rob Brydon). After deducing that their chief rival, Dr. Moriarty (Ralph Fiennes, picking up the easiest paycheque of his career in a bare minimum of screen time), has fled for America, Holmes and Watson are thrust into the middle of a case where a copycat pretending to be their arch nemesis has threatened to kill the Queen of England. The besties are on the case, but a growing desire by Watson to be seen as Sherlock’s equal and the arrival of an American female doctor (Rebecca Hall, who’s actually British in real life, but whatever) widens a rift between them.

Holmes & Watson isn’t the sort of dire comedy that comes to screens entirely bereft of laughs, but one where the more ambitious ideas concocted by writer-director Etan Cohen (Get Hard) are tedious and less inspired when compared to the sort of physical humour and pithy one liners that Ferrell and Reilly could’ve come up with on their own. Despite a barely ninety minute running time, Holmes & Watson feels handily twice as long thanks to Cohen’s inability to decide if he wants to make a slapstick equivalent of a Sherlock picture, a parody, or a classic Ferrell and Reilly comedy in the vein of Talladega Nights or Step Brothers. The editorial decisions showcased throughout Homes & Watson – which suspiciously reeks of something that has been rushed into theatres to capitalize on the holiday movie season – are uniformly poor. There’s a logic to the way the story of Holmes & Watson unfolds, but from scene to scene it’s never sure if the audience is going to be treated to lengthy, unnecessary exposition, a weirdly atonal set-piece that isn’t actually funny, or a chance to see Ferrell and Reilly doing what they do best by simply riffing on each other.

The chemistry between Ferrell and Reilly is as strong as ever, and whenever Holmes & Watson sticks to scenes where they’re slapping the hell out of each other, unwittingly sabotaging each others best laid plans, or generally acting awkward, the film briefly sparks to life. It’s never as hilarious as their best material – together or apart – but there’s something likable to be found. Ferrell’s uppity buffoon act and Reilly’s unparalleled ability to portray good-natured simpleton have always mixed well together, and one almost wishes that Holmes & Watson followed the “if it ain’t broke, don’t fix it” philosophy. Sadly, Holmes & Watson isn’t a contemporary story. It’s a period piece, and that’s where Cohen tends to overthink things to annoying degrees.

It’s not a problem that Holmes & Watson is a deliberately anachronistic period piece, or that it’s trying to imbue such stiff and overused source material with a healthy dose of levity and post-modern surrealness, but rather that none of those attempts at elevated comedy are ever any funnier than just watching Ferrell and Reilly squaring off against each other. Any attempts to parody recent Sherlockian lore – from the BBC series, to Elementary, to the Guy Ritchie pictures – feels stale, flat, and not all that creative. It just references them with no ingenuity, points to them, and says, “isn’t this some ridiculous shit?”. Yes, these are all ridiculous to some degree, but at least have some fun with these parodies instead of letting them languish in hopes that someone with a low bar for comedy and a penchant for all things Sherlock would even crack a smile watching them. 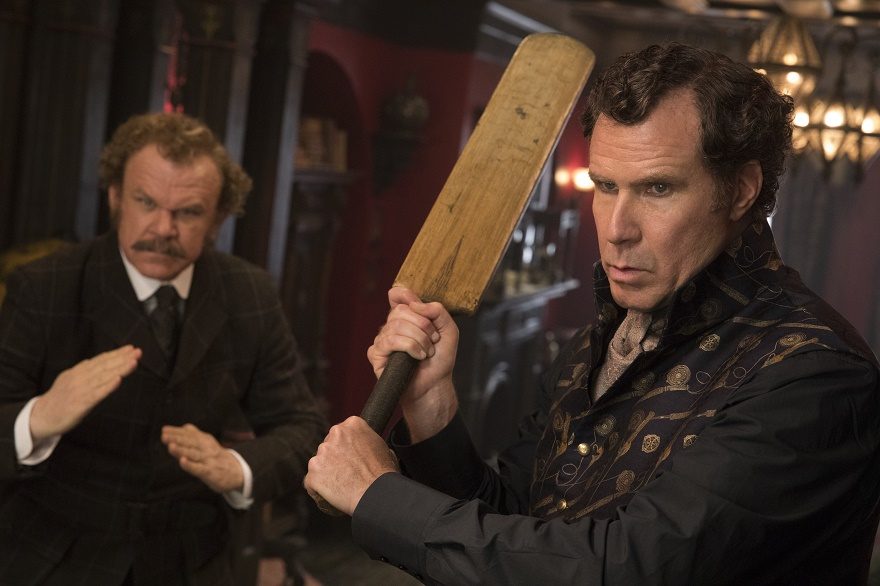 The weird bits – which should be funny since they come out of nowhere – only make Holmes & Watson all the more ponderous thanks to Cohen’s inability to make anything seem spontaneous. There’s an autopsy sequence where Hall and Reilly awkwardly recreate an old timey version of the pottery scene from Ghost with a cake covered corpse that never goes far or gross enough to warrant its existence. There’s a musical number – co-written by Alan Menken – that showcases Ferrell and Reilly’s singing abilities, but there isn’t a single funny line or action in any of it. The climax revolves around the maiden voyage of the Titanic and things only grow more desperately unfunny and boring from there. Instead of wrapping things up with gleeful comedic aplomb, Holmes & Watson starts to feel like being trapped on a sinking ship.

The cast isn’t to blame, and the genuinely seem to be trying their best while Cohen does everything in his power to destroy any comedic momentum they’ve been trying to build. Ferrell is doing a rather nice riff on Sherlock’s sociopathy, and Reilly can get a laugh simply by missing a step while walking and playing it off like nothing happened. No matter how belaboured the film feels, they make the actual funny bits sound and feel effortless, even when they don’t actually elicit any laughs at all. Hall is a pretty good sport, and fits in nicely with Ferrell and Reilly during the film’s many low-hanging pot shots at old timey medical beliefs and patriarchal attitudes. There’s even a nice, strage bit for Lauren Lapkus, as Sherlock’s mute love interest who has been raised by feral cats. Brydon provides a couple of chuckles as the exasperated police detective, and his frequent running mate Steve Coogan has a nifty supporting role as an evil, one armed tattoo artist. These are all naturally funny people, and whenever they’re allowed to react with their known wittiness, Holmes & Watson is briefly enjoyable.

Comedy shouldn’t be tedious and predictable, but that’s precisely what makes Holmes & Watson such a misfire. Cohen has previously written funny films, but he seems clueless when it comes to framing and directing comedic performances and set pieces. Cohen has all the tools here to make a funny motion picture, and he somehow finds a way to turn it into a colossal bore. Scenes crash into each other like someone threw a bunch of ideas for heavily scripted sketches into a hat, drew them at random, and then forced the overall plot of Holmes & Watson to hamfistedly conform to the needs of the sketch. Then in the editing room, Cohen couldn’t figure out how each scene should be played, with bits that work ending too quickly, and floundering moments drawn out to excruciating length. Notably picked on B-movie auteur Uwe Boll could’ve made something funnier, fleeter, and better constructed than Holmes & Watson. The fault of the film’s failure rests squarely at the feet of Cohen and no one else. It’s not one of the worst films of the year overall, thanks to the cast and some decent production design, but it’s absolutely one of the worst directed and edited films of the year.

I’m sure Holmes & Watson is the type of film that works better if you’re at a point just before becoming blackout drunk or being too stoned and immobile to care what you’re watching in the first place, but the other Ferrell and Reilly team ups were funny enough on their own that such indulgences weren’t necessary. By the eight or ninth time I looked at my watch during Holmes & Watson, I seriously questioned if anyone could make their way through the movie sober. By the time it was over, I wondered if drunk and stoned people wouldn’t just be better off taking a nap. The only real reason to see Holmes & Watson is to stave off an impending and painful hangover for as long as possible.

Check out the trailer for Holmes & Watson: