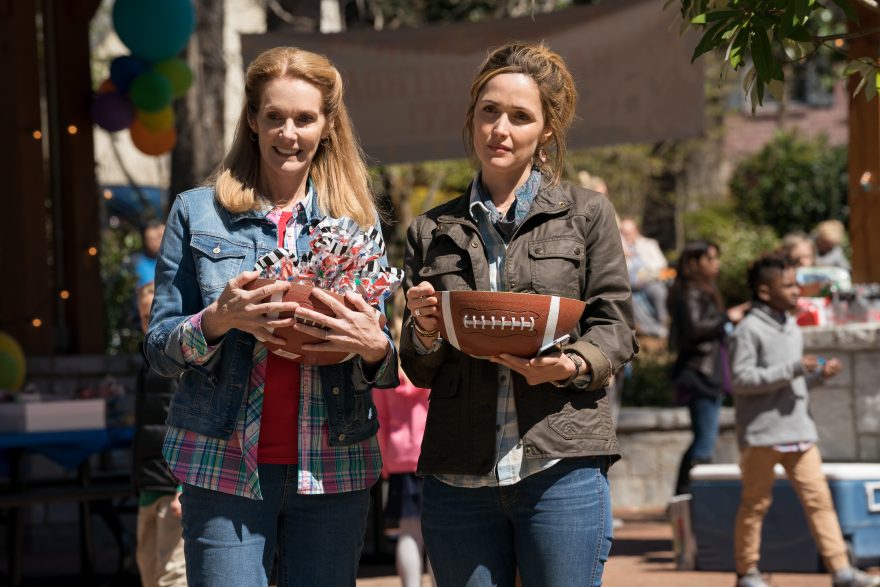 Julie Hagerty is a comedy legend, and it goes well beyond her role in Airplane! She’s had hilarious recurring roles in Malcolm in the Middle, and as Carol West in Family Guy, not to mention work in dozens of other films and TV series.

In her latest role, she co-stars in director Sean Anders’ Instant Family, a funny, sweet, and totally charming look at a couple–Pete and Ellie (played by Mark Wahlberg and Rose Byrne)–who decide to adopt three kids. Julie Hagerty plays Jan, Ellie’s mother, and she brings a levity and sweetness to every scene that is just a part of why the film is so heartwarming.

Hagerty spoke with me about the film, the way it deals with the topic of adoptions, and we even chatted a bit about her role in Airplane! (while I tired very hard not to completely geek out). Read the full interview below.

Instant Family is out now on Blu-ray, DVD, and digital.

Andrew Powell: This film is so sweet. It is so honest. What did you think when you first read the script? Did you get what it was going to be like at all when you signed on?

Julie Hagerty: Well, you know, I loved the script and I love Sean [Anders]. I knew that it was his story, kind of a big stretch, that he adopted. He and his wife adopted three children. With the way Sean molded everything as a director, it was just heartfelt and it’s hilarious, as I think real life is. The more honest one is, the funnier it is, especially the story that he has to tell.

I loved that about Sean and the story. Then, getting to work with Sean and all those wonderful actors.

Powell: How did you get involved? Were you invited? What was the process like?

Hagerty: Well, aren’t I lucky? I was actually invited. [Laughs]

Powell: That’s lovely. I would have to admit that I’d expect so.

Hagerty: I was just so thrilled.

Powell: When he pitched it to you, how did he describe it? Did he tell a bit about what it was going to be like?

Hagerty: Well, I read it, then I called and said, I want to do this, please.

We didn’t talk about it then. When I got there, then of course we talked about it. All the actors are so wonderful and guided by Sean. Margo and I would go, “We’re just having too much fun”. We’re just like, “What are we doing? This is really fun.” Sean has this wonderful ability to … It all blends into a reality of his story, of fun. Then, the days where it was really terrifying, it was terrifying.

What I love the most is out of his reality comes humor, and it’s heartfelt because it’s so true.

Powell: I loved the whole premise and the fact that it shines a light on a topic that I don’t think people talk maybe enough about. Did you know much about adopting before you got involved?

Hagerty: You know, I didn’t really, to be honest, know that much. I knew that my friend Cory adopted about 12 years ago, two young women, who are now grown. That was beautiful watching that process.

What Shawn, and the movie, brought home to me was there are all these children who really need homes, and need parents. There are parents who don’t have children who should have children, and have these beautiful children.

He shined a light that these young people exist, from birth to 18, that need homes.

Powell: I was looking back at all the things you’ve done over the last few years, and I love your choices in films and roles. It feels like you have a keener comedy eye, or interest at least, than a lot of people. So what interests you about projects and what does it take for a project to be interesting?

Hagerty: Well, golly. That’s really hard. I guess the words, and the director. Wanting to work with someone. Pretty much most of the work I’ve done, out of a few exceptions, have been written by the director.

But, I guess I just love the character. Gee, that’s a tough question. Plus, I love to work. [Laughs]

Powell: Right. That’s a good thing, too, for sure.

Hagerty: Yeah. Bottom line is, there’s not mystery, I love to work. I’ve been really fortunate in working with some really wonderful directors, and also writers.

Powell: Well, the one that popped out at me, too, is the fact that you’ve done Family Guy.

Powell: I’m sure that must be slightly daunting, as well as exciting? Did you have any trepidation about doing a show that’s so edgy?

Hagerty: Oh, no. I think, you know, Seth [MacFarlane] is wonderful. Oh, you know, sometimes, yes it is edgy, but, I don’t know. You can’t over analyze everything too much. I don’t think he means anything wrong.

If you go, “Oh boy, this is funny,” then I’m kind of am a little bit like, hmm. I always like to find a little bit of the reality of the situation, and sometimes the crazier the situation is, the more real it is and the funnier it is.

Powell: I’m sure you get asked a lot about it, but Airplane! is one of the greatest comedies ever made.

Powell: Your work in that film is phenomenal. It seemed edgy to me, when I was growing up, so was it edgy to you?

My grandma, bless her heart. I was so excited to be in a movie, then she saw it. She says to me, “Are you ever going to make a nice movie?” [Laughs]

I was like, “Grandma! It’s a movie. I’m from Ohio.” It still wasn’t good enough for grandma. That’s okay. My grandpa liked it.

Powell: Grandmas are tough to please, I can understand that.

Powell: Well, last thing I wanted to know–can you talk a bit about films coming up for you? I saw that you had a couple that are either just wrapping, or getting close to wrapping?

Hagerty: Well, I’m going to be in a new movie with Noah Baumbach, which I’m very excited about. I’m not sure when it’s coming out. It’s still untitled.

And I just finished a film with Marc Lawrence. It’s a Christmas movie where I get to play Mrs. Santa Claus.

Hagerty: Exactly. Yes it is. Yes it is. I’m thrilled about that, too. To be able to be such an iconic character, I hold that very dear to my heart.

Powell: That’s amazing. Lawrence is such a talented writer as well. It sounds great.

Hagerty: I know. Knock on wood, I’ve been in some very good hands. I’m very excited. I’m so excited that you love our movie Instant Family. I’m real proud to have participated in that, too.

Powell: Well, thank you very much. I really appreciate it.

Hagerty: Well, thank you. Thank you.