If you’re fatigued by the glut superhero movies (and box office numbers would suggest that you’d be in the minority of the filmgoing population if you were), Shazam!, the latest entry into the expanding and changing DC universe, won’t hold much appeal. If, however, you’re either a casual or ardent fan of all things caped and powerful, Shazam! is a solidly entertaining and frequently very funny addition to the canon. Functioning both as a standard, predictable, but completely serviceable Hollywood blockbuster and something a bit more comedically irreverent, Shazam! is the type of film that’s good enough and smart enough to make even some of the harshest genre critics forget that they’ve seen all of this before. It’s a reliable carnival ride that’s worth taking because it makes one feel the biggest endorphin rush possible.

Fourteen year old Billy Batson (Asher Angel) has floated in and out of foster homes since being abandoned by his mother as a young child. He often finds himself on the wrong side of the law, has no friends, and his quest to track down his biological mother isn’t going as well as he’d hoped. After another brush with trouble, Billy is sent to live with some kind hearted foster parents (Cooper Andrews and Marta Milans) and their five children, but he’s barely humouring their attempts to love and care for him; biding his time before he can run away again and begin his quest anew. One day, after committing a rare, selfless act, Billy is magically transported to another world by a mysterious wizard (Djimon Hounsou). The wizard – the last in a long line of magical protectors who’ve been keeping the supernatural evils of the world at bay – has grown weak and needs someone pure of heart to carry out the future protection of mankind. Billy, understandably weirded out by all this, reluctantly agrees. Now, whenever he says the wizard’s name, Billy is transformed into a buff looking adult superhero (Zachary Levi) who’s capable of any number of incredible feats. His secret is initially shared only by his crippled foster brother, Freddy (Jack Dylan Grazer), and precocious foster sister, Darla (Faithe Herman). He mostly uses his powers to impress others and generally goof around, but the emergence of a powerful supervillain (Mark Strong) with the ability to summon an army of spirits representative of the seven deadly sins will soon put Billy’s conscience and abilities to the ultimate test.

Shazam! gets off to a rough start. Billy’s backstory and the character’s mythological groundwork laid out in the screenplay from Henry Gayden (Earth to Echo) are curiously awkward and not particularly captivating. Director David F. Sandberg (Lights Out, Annabelle: Creation) doesn’t seem all that interested in the slow stuff, either; racing over it as fast as he can to get to the high spots. Further groans are had once Billy gets to his new home and the viewer discovers that all his foster siblings come from the Home for Stock Young People Cliches, himself included. Billy’s too self-centred to realize how wounded he is, and his journey will be a mirror image of the villain’s darker path. Freddy is a kid who tries too hard to impress others to compensate for his visible insecurities. Darla is loyal and cloying in equal measure. Mary (Grace Fulton) is a stressed out teenager working hard to get into university. Eugene (Ian Chen) is a nerdy gamer, and Pedro (Jovan Arman) is overweight, nearly silent, and kinda sullen. Even Strong’s baddie is your typical “bullied kid who grew up to become a bully” archetype. None of these characters and their problems are remotely original, but at least they play well off each other thanks to the efforts of the young actors tasked with portraying them.

After the first twenty minutes or so and once Billy has been gifted with his newfound superpowers, Shazam! settles into a wildly entertaining and effortlessly likable groove. As soon as Levi arrives in the picture, Shazam! still isn’t much more than a fantasy about a young man learning to put the needs of other above his own selfish whims. It’s a tale of an orphan learning that “family is what you make it” grafted onto the timeless “with great power comes great responsibility” message that’s been the backbone of superhero franchises since the turn of the century, but there’s a lot of fun to be had within those friendly storytelling confines. 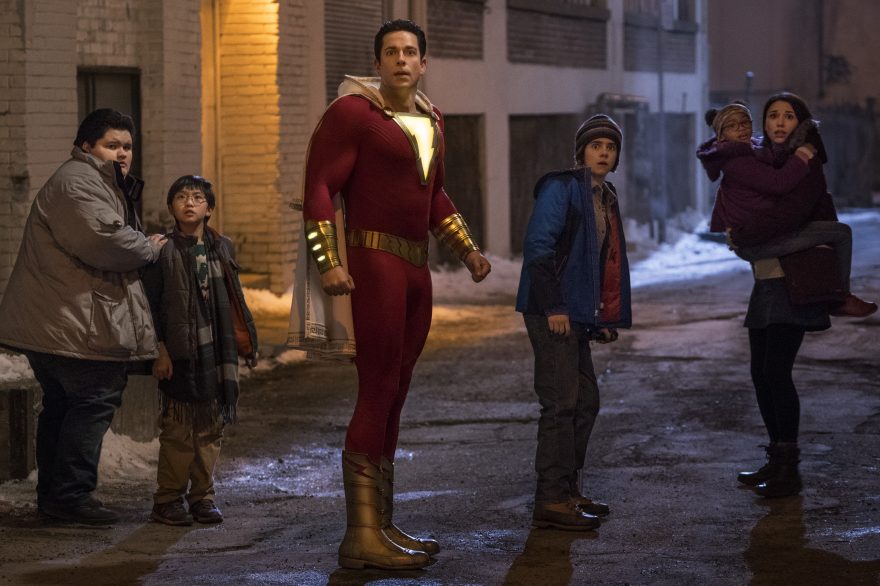 Levi convey’s Billy’s wide eyed awe and guileless shock with charm and aplomb, and his chemistry with Glazer provides Sandberg with his best comedic and dramatic material, especially when a rift develops between the two. Most of the film consists of watching Levi bumble his way through feats of heroism without having a clue what he’s actually doing, and while that’s also a tried and true storytelling trope, it’s one of those things that can always succeed if it’s pulled off correctly. Shazam! knows that Levi’s performance is its true ace in the hole. The other kids are great and Strong seems to be having a blast as the heavy, but they’re all colouring well within the genre lines and are being asked to play characters that have proven reliable in other more successful films. Outside of adding a welcome message that adults shouldn’t tell their kids what they should be when they grow up, Levi is the film’s only true stroke of inspiration.

Sandberg is a curious choice to helm a comedic caper flick, but he proves to be up to the task after the film’s wobbly start. Shazam! has plenty of visually and comedically inventive set pieces that confidently balance jokes and action. Set in Philadelphia, but clearly filmed predominantly in Toronto (save for a memorable bit set on the famed “Rocky Steps” outside the Philly Museum of Art), Sandberg makes the wise choice of making his settings as bright and colourful as possible without making any of it overly cartoonish or hyper-stylized. The special effects heavy good versus evil battles are well staged, even if the film’s grand finale is unconscionably long and drawn out for something that’s still a bog standard melee trucked in from dozens of other superhero films before it. Sandberg also gets a chance to stretch his horror movie roots a bit via the villain’s cadre of ghoulish gargoyle beasties, offering a few images so brutally terrifying that it caused more than a few youngsters in the screening I attended to either shriek, cover their eyes, or leave the auditorium for a few minutes. (Say what one will about having something that dark in what’s ostensibly a kid’s movie. At least Shazam! has more guts than Venom did, albeit with less eclectic sensibilities.)

I’m sure plenty of people will be taken by the good feelings that Shazam! will leave them with, and that’s ultimately proof of the film’s success. It’s not a great movie, but people will say it is because it’s so gosh darn entertaining. There’s nothing wrong with that at all. Upon leaving the screening I attended, one middle aged man who was grinning from ear to ear told his friend that there are few feelings better than the energy rush one gets from watching something they enjoyed, and I am in complete agreement with him.

As a piece of popcorn entertainment, it is very good, and as another piece in Warner Bros. continuing reinvention of the DC universe, it’s another baby step in the right direction. Shazam! is good enough to make viewers forget for a couple of hours that they’ve seen all of this before. That’s not meant to sound like a backhanded compliment, but as a genuine one. It might not be terribly original – cribbing from a wide swath of feel good movies from Spider-man to Big and everything in-between – but it’s hard work making a piece of honest entertainment within the confines of the micromanaged and megabudgeted studio system. For that, Shazam! deserves all the good will that will come its way.

Check out the trailer for Shazam!: