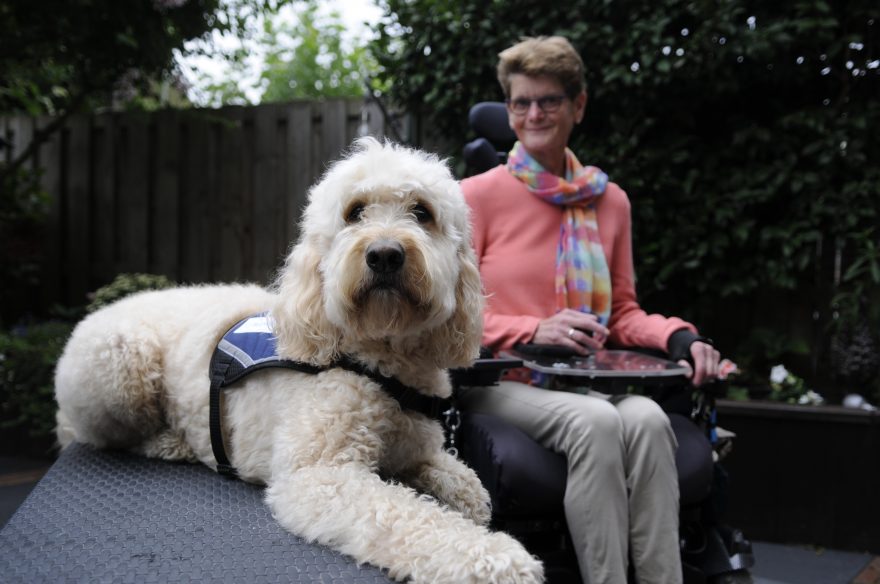 Prolific Dutch documentarian Heddy Honigmann’s latest effort, the profoundly moving Buddy, examines the emotional and practical relationships fostered and built between service dogs and the owners that depend on them.

Buddy looks at service animal owners in the U.S. and Europe of various ages and experiences and examines what these dogs mean to their owners and the care being provided. A young boy in Utah with visual impairment and autism finds a best friend in his animal. Trevor, an Afghan war veteran with severe PTSD, wasn’t able to leave his house for several years with his family until his dog, Mister, essentially saved his life. A paraplegic professional demonstrates the wide array of tasks her exceptionally intelligent helper is able to achieve. A psychologist who lost his eyesight 27 years ago and an elderly World War II bombing survivor both look back fondly on the animals who’ve come into their lives and sadly passed on.

All of the stories profiled in Buddy are deeply personal to those sharing them, and Honigmann balances sentimentality with practicality by asking her subjects relevant, empathetic questions that allow for the cathartic moments to come about organically rather than forcing people who’ve experienced great traumas into talking about delicate matters of the heart and mind. She knows precisely when to pry and when to back off and observe.

Not all of the stories shared in Buddy are happy ones. Naturally, two of the subjects are able to speak openly about the deaths of previous helpers, but that doesn’t make those reflections any easier. Similarly, it can be tough to watch Trevor slowly coming out of his shell to reintegrate with the world around him. One of the most beautiful and tragic moments in the film comes when Honigmann follows Trevor and his family on a seemingly trouble-free trip to a local park. The mentally scarred veteran doesn’t last too long before getting freaked out by the park’s wide open spaces. How Mister watches over Trevor and understands his pain while his wife is trying and struggling with the same emotions is precisely why a film like Buddy needs to be made in the first place. In a single heartbreaking scene, Honigmann expertly illustrates why support and therapy dogs can be vital tools in the recovery process, and she does so without sugar coating the real life pain that goes hand in hand with their use. It’s one of the best and most unflinching scenes in any documentary this year.

Buddy is much more than a crowd pleasing, uplifting movie about people bonding with their dogs. It’s a poignant reflection on mortality, both for the humans and the animals alike, and one would have to be made of stone to not tear up a little bit while watching Buddy.

Buddy opens at The Hot Docs Ted Rogers Cinema in Toronto on Friday, June 21, 2019. It also opens at Vancity Theatre in Vancouver on June 28, The Bookshelf in Guelph on July 8, Playhouse Hamilton on July 9, and Princess Cinemas in Waterloo on July 19.

Check out the trailer for Buddy:

This review originally appeared as part of our coverage of the 2019 Hot Docs Canadian International Documentary Film Festival. It has been revised and expanded for the film’s theatrical release.