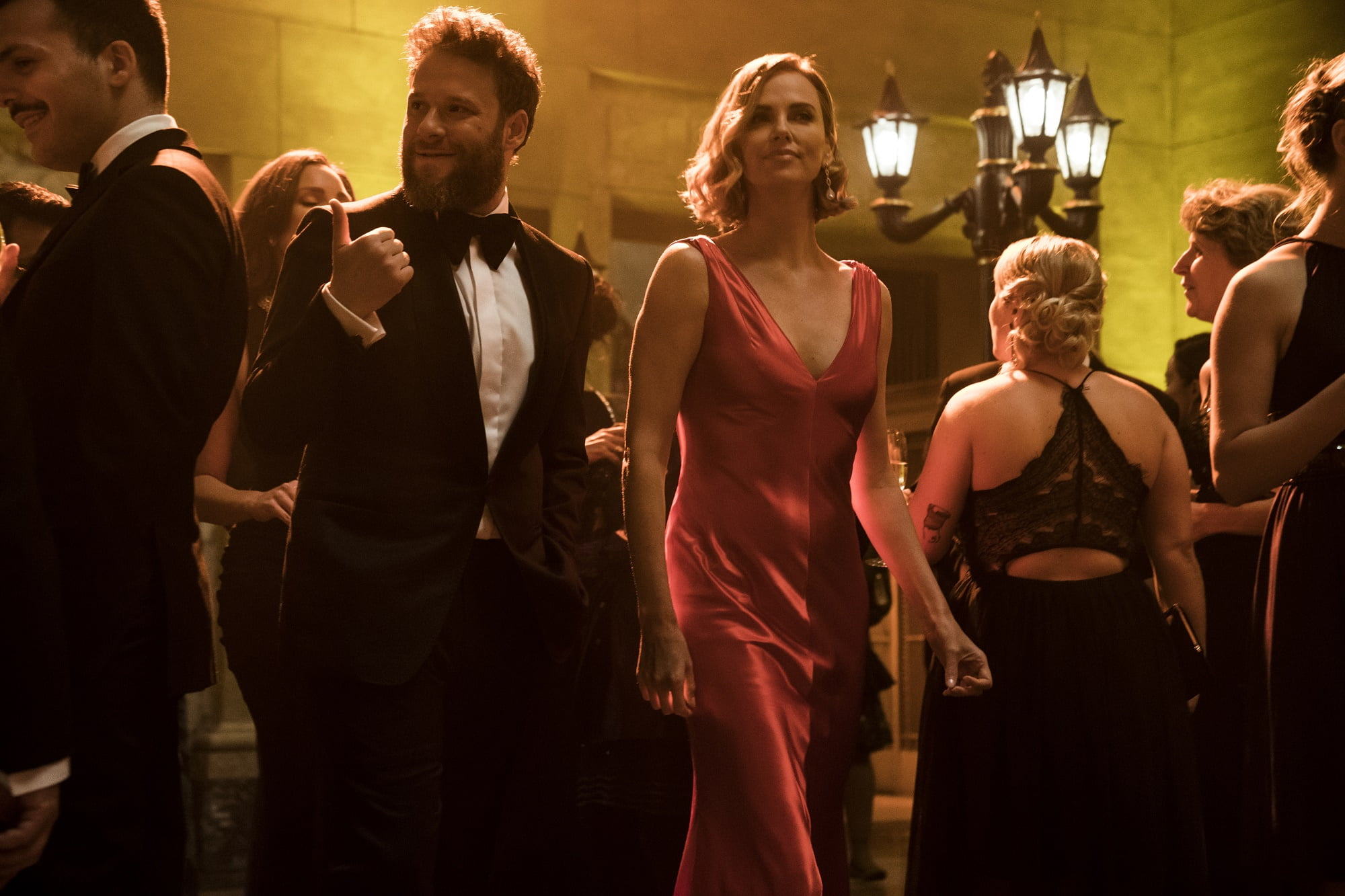 Take The American President, Notting Hill, and Pretty Woman and put them into a blender with some modern political subtext, copious amounts of illegal substances, and a handful of jokes about unfortunately timed erections and you’ll get Jonathan Levine’s Long Shot, a film that’s far more charming, sweet, and hilarious than I probably just made it sound. The tale of a down on his luck, windbreaker wearing schlub and a strong, fashionable, poised, influential, and motivated career woman who fall in love to the shock and amazement of everyone around them, Long Shot isn’t trying to buck against romantic comedy conventions, but it does try to subvert a handful of them in what’s certain to be one of the most raucous crowd pleasers of the year.

Investigative journalist Fred Flarsky (Seth Rogen) has just been fired from his job at a New York City alt-weekly after the publication was bought by a right-wing media mogul (a nearly unrecognizable Andy Serkis, but really, when can you recognize him?). His entrepreneurial best friend (O’Shea Jackson Jr.) invites Fred to a swanky rich person party, where he recognized by none other than the current Secretary of State, Charlotte Field (Charlize Theron). Fred and Charlotte have history together, since she used to be his babysitter back in the day, and he once harboured a not-so-subtle crush on the budding politician. Fred is a mess, but Charlotte sees something in him. Charlotte’s ineffective boss, President Chambers (Bob Odenkirk), a once popular television actor, isn’t seeking reelection in a bid to become a film star, earmarking his hardworking colleague as a potential nominee for his soon to be vacated job. Much to the chagrin of her closest assistants and advisors (June Diane Raphael and Ravi Patel), Charlotte wants to bring the effortlessly humorous Fred on as her speechwriter. Along their whirlwind tour of the world to drum up support for the upcoming campaign, Fred takes Charlotte to task for abandoning her political ideals for a chance at higher public office, and Charlotte calls Fred out for being a manchild and a hypocrite, but there’s definitely sparks between the two of them that start to fly. Before too long, however, their budding relationship will prove to be a major stumbling point for Charlotte’s presidential aspirations.

Long Shot, as the title, premise, and casting might suggest, is a very silly movie that requires a healthy suspension of disbelief, but as bawdy political romantic comedies go, it’s the best since Warren Beatty’s Bulworth. The notion that a woman running for political office will always be perceived by distressingly large portion of the population as a frigid, humourless drone is certainly broached throughout Long Shot, but on the whole, director Levine (Warm Bodies, 50/50, The Night Before) and writers Liz Hannah (The Post) and Dan Sterling (The Interview) don’t want to make this all that political. The focus of Long Shot is to deliver the funniest romantic comedy possible, and everyone here plays to their strengths perfectly.

The relationship between Fred and Charlotte isn’t a meet cute in the purest sense, and one that’s intelligently written. Long Shot is a story about two motivated and driven people who lead different lifestyles and are largely content with their accomplishments while wanting a little bit more. They don’t need to complete each other. There’s nothing missing from their lives on a professional or social level. They just really like each other, and they want to support each other. Narrative contrivances aside, it’s as pure and emotionally realistic as cinematic romances tend to get. Long Shot is also one of only a handful of such films where the male character has to play the rough-around-the-edges and damaged person, and one where the female lead is considerably older and more experienced than her love interest. 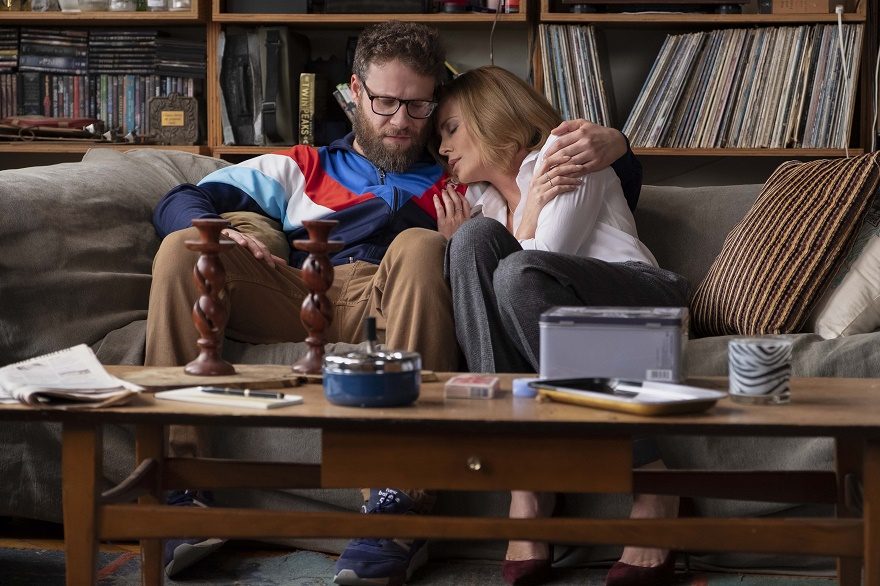 Long Shot plays out more or less in a fashion that one would expect: Fred and Charlotte flirt, clash, flirt some more, hook up, and forces will conspire to break them up. The plotting and pacing (which like many modern day comedies is a little bloated) isn’t ever in question, but the material lends itself well to a handful of inspired set pieces and bizarre touches. A sequence where an intoxicated and drug addled Charlotte has to bluff her way through a hostage negotiation while Fred sweats balls in the adjacent room is a lock for one of the funniest scenes in any film this year, while Serkis and Alexander Skarsgård (as the Canadian Prime Minister and a romantic rival for Fred) deliver two of the strangest and most hilariously idiosyncratic supporting performances of the year. Even Jackson, who’s saddled with the stereotypical best buddy role, gets to break away from convention in creative, memorable ways.

Long Shot can credit much of its success to Levine, who’s becoming more and more adept at creating this sort of populist fare. It might not be his best movie (and it’s definitely leaning heavily on its pop song heavy soundtrack, but mostly to great effect), but it’s certainly his best looking effort – thanks to Jean-Marc Vallée’s frequent cinematographer Yves Bélanger – and his most energetic. Long Shot finds Levine stomping on the comedic gas pedal early and often, only tapping on the romantic and dramatic breaks to head into the plot turns. Long Shot is a madcap romp that’s directed by the steadiest of hands.

But one has to believe that Long Shot wouldn’t add up to the sum of its interesting and likable parts without the off-the-charts comic and romantic chemistry between Theron and Rogen. As individuals, Rogen and Theron turn their characters into the most important assets a successful romantic comedy can have; they’re flawed, people that the viewer would like to be friends with and who are deserving of each other’s love. In the film’s most disarmingly sweet moment and one of the best scenes of his career as a performer, a crestfallen Rogen repeats aloud to no one in particular that Fred is deserving of Charlotte’s love, and through their interactions as a couple up to that point, we believe the sentiment. Rogen has a knack for vulnerability that often goes underutilized, but Long Shot makes perfect use of it here. Meanwhile, Theron’s comedic chops have been so underutilized that one could be forgiven for thinking they’re nonesistant, but she runs into this material with full force, reinforcing her status as one of the best leading performers working today. Rogen and Theron are all in with the material, and their graceful give and take makes Long Shot pay off tremendous dividends.

Is it a little corny? I mean, I just wrote a sentence that said a film called Long Shot pays off, so who am I to judge? Long Shot is a the perfect example of the old adage that people might not remember what you say, but they’ll remember how you made them feel. I knew that Long Shot wasn’t a perfect movie the entire time I was watching it, but I left the theatre with an ear to ear smile and feeling like a million bucks. It’s not high art or even all that original, but Long Shot is assuredly a confident success.

Long Shot opens in theatres everywhere on Friday, May 3, 2019.

Check out the trailer for Long Shot: