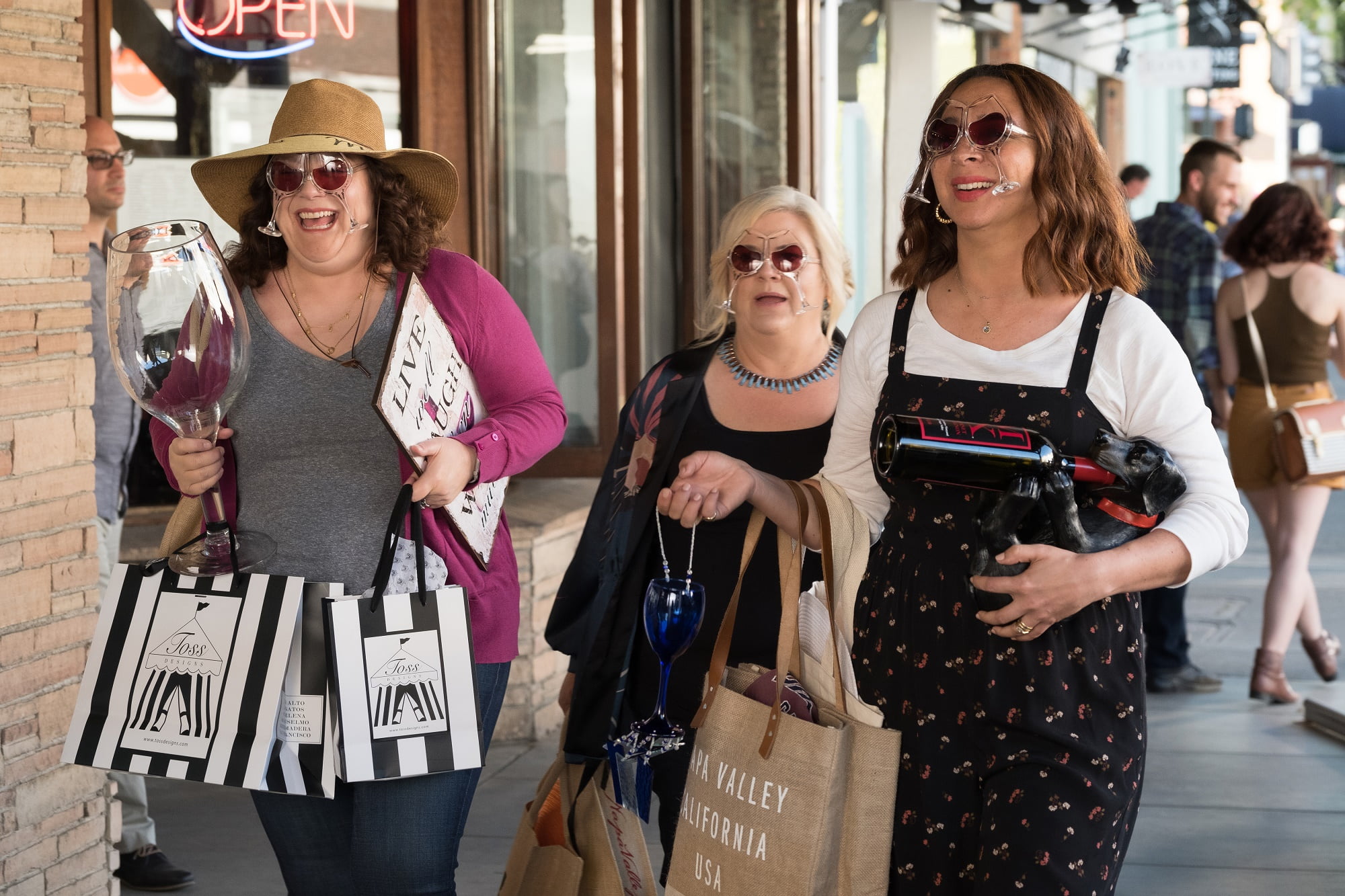 Aimed squarely at an audience that’s barely too old for the likes of Bridesmaids and Girls Trip, but too young for the stylings of Book Club or this week’s Poms, director and star Amy Poehler’s surprisingly hilarious ensemble comedy Wine Country is a party flick for the firmly middle aged. Mature, but reasonably bawdy and witty, Wine Country gives a bunch of talented female performers some decent material and plenty of interesting characters to work with. Poehler gets the best out of everyone involved here (herself included) and adheres to an easily followed formula to great success. Although it’s premiering on Netflix, Wine Country is a film that plays best to a crowd on a night out or at house party where the drinks are flowing freely. It’s here for a good time, not a long time, but it’s certainly effective.

Therapist Rebecca (Rachel Dratch) wants to have a low key get-together with her long time best friends in honour of her fiftieth birthday, but the aggressively detail oriented Abby (Poehler) insists on organizing a wild weekend outing to a vacation home in California’s Napa Valley. The friends – who all worked together at a pizza place in their teens and early twenties – assemble for the blowout weekend at a property overseen by an overly blunt owner (Tina Fey) and an annoyingly attentive and slightly creepy caretaker (Jason Schwartzman). The ladies all want to relax, catch up, celebrate Rebecca, and drink their faces off, but Abby’s rigid adherence to her intricate itinerary and a telling tarot card reading from a nonplussed psychic (Cherry Jones, in a small, but memorable appearance) will cause long simmering tensions and secrets among the friends to bubble to the weekend’s fun loving surface.

Written by Liz Cackowski and co-star Emily Spivey, Wine Country is a textbook ensemble comedy that makes sure all of its colliding characters have clear cut traits, motivations, and personalities. Rebecca is mousey, prone to giving out advice (or “feedback”) freely, but never listening to anyone about her crumbling marriage to an aloof husband. Abby’s micromanaging and perpetual fretting are hiding an underlying sadness that will be addressed once the film’s big reveals start piling up. Family woman Naomi (Maya Rudolph) is in denial about a health scare. Lesbian Val (Paula Pell) is single and ready to mingle following double knee surgery, but also lovelorn and kinda sad. Catherine (Ana Gasteyer) is a budding celebrity chef who thinks her friends hate her, but she’s really just too much of a workaholic to get invited to anything. Homebody Jenny (Spivey) has severe social anxiety and doesn’t particularly want to be there. They’ll all clash and comfort one another, and it spoils nothing to say that Wine Country will end with all the ladies knowing more about themselves and each other by the time the credits roll.

Mostly, Wine Country is just a clever excuse to watch Poehler and company spout rapid fire one liners while drunkenly fumbling their way through awkward interactions and silly set pieces with maximum gusto. Poehler (delivering what’s technically her first feature) has obviously given her highly qualified cast of comedic talents plenty of room to riff and improvise, but her directorial choices and instincts are spot on. Visually, Wine Country has to do nothing more than make Napa Valley look as gorgeous as possible, but the style of comedy being employed requires a firm, judicious hand. While most films built around ensemble casts that are adept at improvising can often feel comedically scattershot from scene to scene, Wine Country has more hits than misses. Poehler’s filmmaking abilities are remarkably seasoned. She knows what bits are the funniest or most emotionally resonant and eliminates most of the filler that these types of movies tend to suffer from. It’s loose enough to still feel breezy and silly, but tightly constructed enough to never feel meandering or aimless. One could easily watch these women bouncing insults, gags, and witticisms off each other for hours, but Poheler’s direction and the nicely sketched out script provide some strong glue to hold Wine Country together. 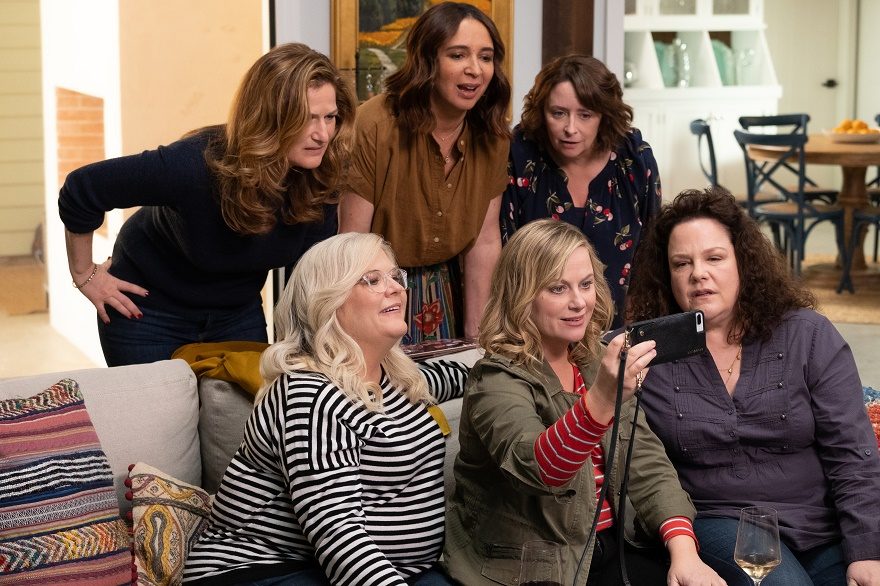 It also helps greatly that there isn’t a lacklustre performance to be found in Wine Country, with everyone bringing their A-game and getting a chance to shine. The film is built largely around Dratch’s character, and it’s wonderful to see someone so perpetually underrated as a performer take centre stage. Poehler, who’s no stranger to playing tightly-wound micromanagers, reminds viewers why she’s one of the most consistently sought after comic talents in the world, but she’s also more than willing to cede the spotlight to her co-stars here. Gasteyer, Spivey, and Schwartzman all get ample chances to show off their talents, and Fey is having a blast playing against her usual typecasting as a rugged, outdoorsy type, but Wine Country finds Rudolph and Pell shining brightest, as the film’s funniest and most compelling characters, respectively.

When it comes to comedy, Rudolph has proven beyond a shadow of a doubt that she can do no wrong, even in the most marginal of projects. Whenever Rudolph gets rolling, Poehler wisely gets out of her way and just lets the camera capture the action. The most gut busting moment of Wine Country comes when Naomi drunkenly grinds a vineyard tour to a halt with a lengthy, drunken speech that functions almost like a movie unto itself. But while Rudolph is doing comedic backflips that the audience already knows she’s fully capable of pulling off, Pell gets the second funniest, but most dramatically satisfying character in Wine Country. Val is physically imposing, charming, likable, and kind-hearted, and a subplot revolving around her meet-cute with a millenial bartender-slash-visual artist (Maya Erskine) gives Poehler’s film a surprising amount of emotion. Wine Country is always entertaining, but whenever Rudolph and Pell take centre stage, the film kicks into another gear.

Like most ensemble films aimed at people of a certain age, there’s a healthy amount of cliche and corniness to be found in Wine Country. The plotting is obvious, and while it takes a surprisingly long amount of time for the friends to start falling out with one another, everything wraps up more or less how one expects them to. It’s not exactly original or ambitious, but Wine Country wraps up in appropriate fashion. People want to leave a party knowing that they had a good time among friends, and Wine Country delivers a more than satisfactory endorphin rush that recreates that feeling. It’s gleefully unpretentious, but made with a considerable amount of care.

Wine Country is available to stream on Netflix starting Friday, May 10, 2019.

Check out the trailer for Wine Country: