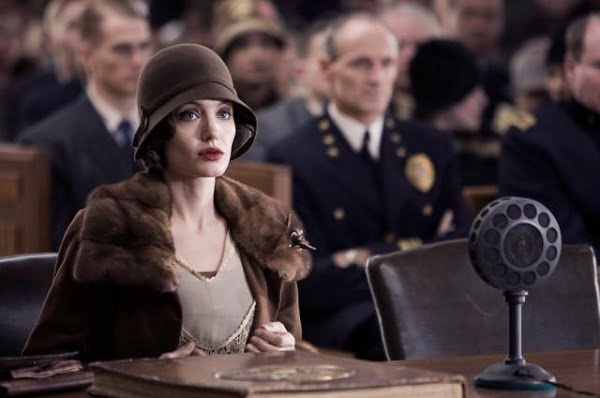 New this week on DVD, Angelina Jolie stars in Clint Eastwood‘s Changling, the story of a mother in 1920s Los Angeles whose son goes missing. Also out today, I take a look at Ridley Scott‘s Body of Lies; the Dead Like Me movie, Life After Death; and Bill Maher‘s documentary, Religulous.

Changeling
Oscar-winning director Clint Eastwood is well-known for his provocative dramas, but this week he debuts a film with a plot that begs the question: Are you serious?

Angelina Jolie stars as Christine Collins, a distraught mother who loses her son, only to have him returned to her months later. But Christine believes that the boy is not actually her son, even though he says he is, and looks like him. Begging the police to continue looking for her real son, the authorities try to convince the public that she is delusional, but with the help of a preacher, played by John Malkovich, she will try and convince those who will listen that the corrupt police are trying to ignore her pleas.

Set in 1920s Los Angeles, Changeling is based on real events surrounding a series of kidnappings and murders.

Unlike some of Eastwood’s previous films, which garnered huge critical praise, Changeling has had a very mixed reception since it debuted though.

Clocking in at nearly two-and-a-half hours, Changeling is a test of patience, especially once it blows past the point where you expect the logical ending.

Changeling is also surprisingly formulaic, with far too many predictable moments between the story, the acting, and even the cinematography.

What finally made me dislike Changling the most though was Jolie’s over-the-top performance as this grieving mother. She brings real weight to the role, where other actresses might have come across as merely ridiculous, but for me at least, the passion of her performance bleeds through into the realm of caricature.

Body of Lies
Director Ridley Scott retreads some familiar territory with his most recent film, Body of Lies, a violent, action drama in the tradition of Black Hawk Down.

Russell Crowe stars as CIA boss and chief American stratagem Ed Hoffman. Marking the fourth production where Crowe and Scott have worked together, Body of Lies is not their best work to date, but it is an intriguing sampling of war-meets-espionage.

With Leonardo DiCaprio playing Roger Ferris, a CIA operative working to uncover a terrorist leader, the story crosses the Middle East as Ferris attempts to get support from Hoffman, and work with numerous foreign contacts. At the same time, Ferris will have to decide how much he can trust Hoffman as events go sour in Jordan.

While I enjoyed DiCaprio, who coasts a bit but performs well as the primary focus of the story, Body of Lies is a jumble of conflict and events that hardly seems to pay off in the end. Crowe is also beyond useless in his role, bringing very little to this small part, which should have left a bigger impact in the story.

Scott’s only great choice in Body of Lies seems to be actor Mark Strong, who plays Hani, Jordan’s head of intelligence. He plays the local counterpart to Crowe’s Hoffman, but he does such a good job, it’s difficult to compare the two actors.

Those elements aside, I’m giving Body of Lies a mild recommendation for anyone who enjoys Scott’s films. He is not in his best form, but even on a weaker film, Scott is far more entertaining than three-quarters of the other directors working today.

Dead Like Me: Life After Death & The Complete Collection
Direct to DVD titles have a bad name, thanks in part to the piles of schlock titles released by small and large studios every week, but that is starting to change and the new Dead Like Me movie is proof there is life after television.

Airing for just two seasons, Dead Like Me was a phenomenal dramedy about a group of modern day grim reapers, and their trials and tribulations as they deal with both life and death. After Showtime axed the series, it took a few years, but a movie was finally put together and picks up shortly after the end of the show.

While not everyone is back for the film, Dead Like Me: Life After Death stars most of the show’s regulars, including Ellen Muth, Britt McKillip, Callum Blue, and Jasmine Guy, with Lost’s Henry Ian Cusick taking on the part of the new boss, Cameron Kane. (Sarah Wynter also takes on the role of Daisy, although with none of the wit, charm or heart of Laura Harris.)

In the film, the Der Waffle Haus is gone, Rube is missing, and Kane has stepped in to replace Post-It notes with mobile phones. Pulled into the shadow of Kane’s luxurious lifestyle, the group find themselves living life without any rules, as George finds herself drawn into her sister’s life when a reap does not go as planned.

Life After Death starts out a little awkwardly, but director Stephen Herek does an admirable job of bringing this movie to life, without sacrificing any of the show’s original charm. The story focuses a lot on George’s sister, Reggie, but that pays off incredibly well in the end.

While I missed the original locations (the show was filmed in British Columbia, but the movie was filmed in Montreal) this is an otherwise wonderful follow-up to the series, and I only hope that there is at least another film or two ahead.

Fans who don’t own the series can also pick up the new Complete Collection, which includes the film.

Religulous
In this tough, and sometimes amusing documentary, Bill Maher travels to some of the most religious areas of the world and explores what spirituality means to our culture. For the most part, Maher explores some of the more ludicrous, and fundamentalist beliefs, talking to everyone from priests and rabbis, to scientists, and politicians.

At the core of the film, Maher explores one main issue that he has, and that’s the pervasive nature of violence, and even ignorance, that is perpetrated by religions.

Maher uses the film to examine some of the craziest people you will ever hear, including one man who has 100,000 followers and claims to be Jesus Christ. He also talks to some reasonable people, who happen to have a clearer view of the world, but also tend to back up his anti-faith discourse.

And therein lies the problem with Religulous. Maher isn’t interested in the level-headed faithful followers, or discussing the merits of faith, he just wants to stand on his pulpit and preach about the ways that religion is causing strife.

Let me just get off on my own rant by saying that no one can deny that religion, in all its forms, has caused mass bloodshed throughout the ages, but that hardly means that all religion is bad. In a similar way, one could claim that science is bad because it has given us the means to perpetrate our blood-thirsty nature, but that hardly makes science a bad thing.

Still, Maher presents an interesting view of religion; it’s just not as funny, or insightful, as you might hope.