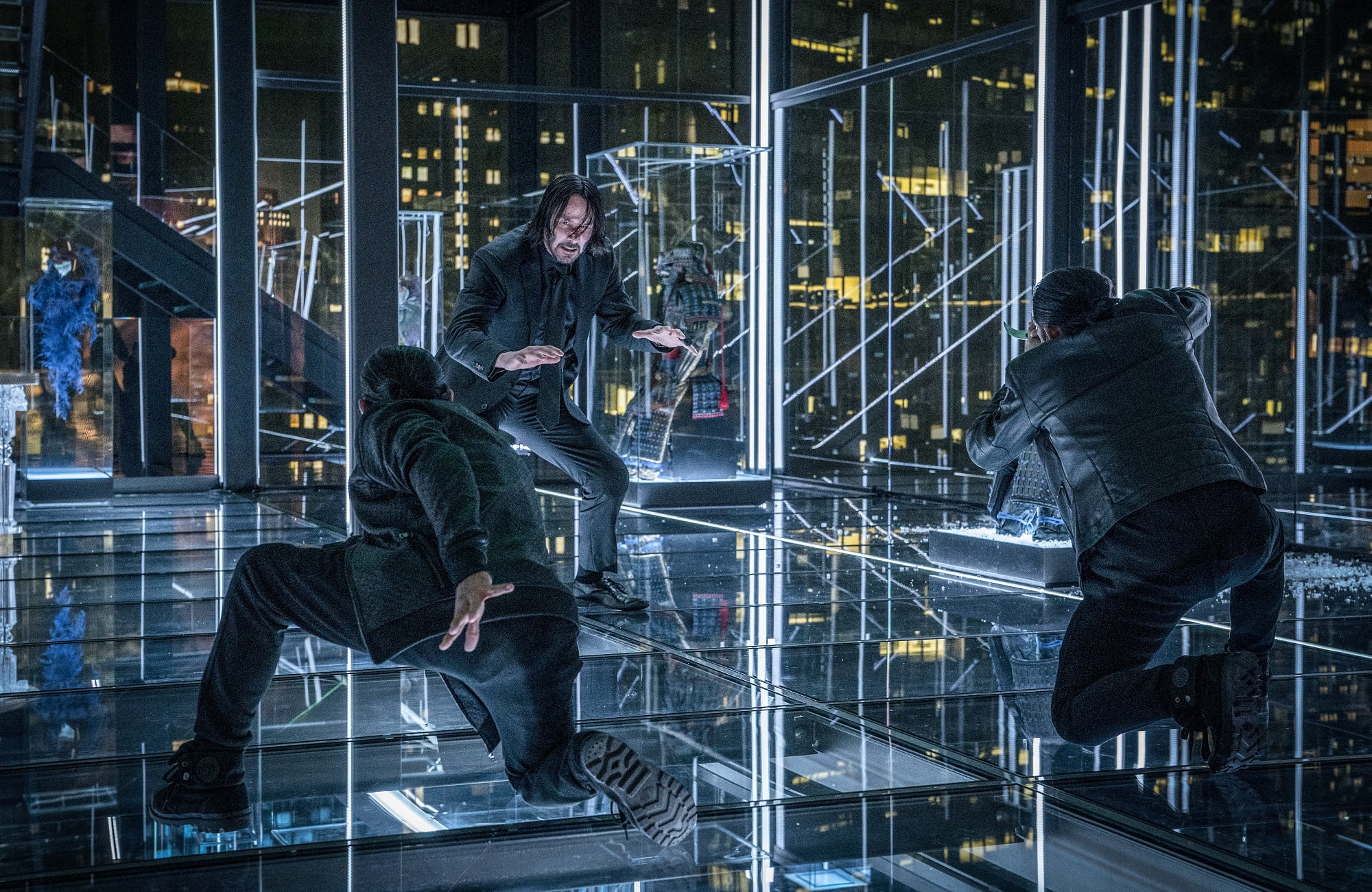 John Wick: Chapter 3 – Parabellum, the latest entry into the best action franchise going today, continues the series’ upward trajectory into fresh, exciting, but potentially top heavy territory. Once again dazzling with its now trademark blend of style, storytelling, humour, and relentless action, John Wick: Chapter 3 – Parabellum will enthrall fans of the first two assassin flicks (just don’t try going into this thing cold), while whetting their appetites for something potentially greater and more involved down the line. There are a few relatively minor red flags that returning stuntman turned director Chad Stahelski and screenwriter Derek Kolstad’s franchise might be taking on more than it can ultimately handle, but when it comes to delivering a gorgeous looking, layered, and wholly entertaining thrill ride par excellence, no one does it better than Keanu Reeves’ titular, dog loving widower.

John Wick: Chapter 3 – Parabellum kicks off immediately after the events of the previous film, with a $14 million dollar bounty placed on the head of our hero by the shadowy “High Table” of assassins after breaking one of his secret society’s biggest rules by murdering an evil crime boss on the hallowed grounds of The Continental. If you have no clue what I’m talking about already, stop reading and know that none of John Wick: Chapter 3 – Parabellum will make a lick of sense to anyone who isn’t familiar with the previous entries in the series. Flanked by his adoring dog, John Wick (Reeves) has been granted a short stay of execution to safely get out of New York City by The Continental’s understanding owner and operator (Ian McShane). John’s head start and constant ability to outwit, outsmart, and outlast any number of other assassins while on the lam leads to the High Table sending a mysterious “adjudicator” (played by Asia Kate Dillon with a perfectly eerie deadpan sensibility) to New York to shake down the city and punish anyone who might be aiding and abetting John on his increasingly complicated journey to clear his name, seek revenge, and get out of the hired killing game for good.

John Wick: Chapter 3 – Parabellum opens in perfect fashion, with Reeves’ bruised, battered, shot, stabbed, and snappily dressed hero frantically attempting to flee the city. Stahelski gives viewers little room to breathe and catch up for the first thirty minutes or so, recklessly bouncing viewers and the hero around like they’re captives in an increasingly chaotic game of pinball. It’s a film that delivers the goods early and often, and the spellbinding opening and closing to John Wick: Chapter 3 (which doesn’t outdo the second film’s dazzling hall-of-mirrors climax, but comes close) showcases precisely the brand of derring do, head smashing, neck snapping, and furiously stabby action that made the first two films unexpected and wholly welcome genre successes.

No one in genre cinema today is making action films in the same manner as Stahelski, who infuses the John Wick franchise with a certain degree of class, refinement, and literary sensibility that’s both intelligent and tongue-in-cheek at the same time. Stahelski takes John Wick: Chapter 3 – Parabellum just seriously enough to underline the heightened theatricality of the hero’s world, while constantly acknowledging how outlandish and ridiculous the franchise’s core premise continues to get. Just like John Wick: Chapter 3 – Parabellum isn’t solely about avenging the memory of a dead wife, dead dog, and dead muscle car anymore, Stahelski’s latest makes some nifty new visual jumps. The fluid and impressively slick cinematography (handled once again by the first sequel’s lenser Dan Laustsen), heavily detailed production design and costuming, and intricately choreographed fights and shootouts are as impressive and jaw dropping as ever, but if the first John Wick adventure was about reinventing the revenge narrative, and Chapter 2 was a love letter to old school American action flicks, Stahelski’s latest crack at the material is a much broader embracing of European and Asian action flicks. With constant nods to ballet, Tarkovsky, a more literal equating of John Wick to classical samurai traditions, and a diversion to Northern Africa, John Wick: Chapter 3 – Parabellum is more worldly in its approach than its predecessors on a visual level, but this self-aware cleverness also provides the writers with a new set of challenges that the other films lacked. 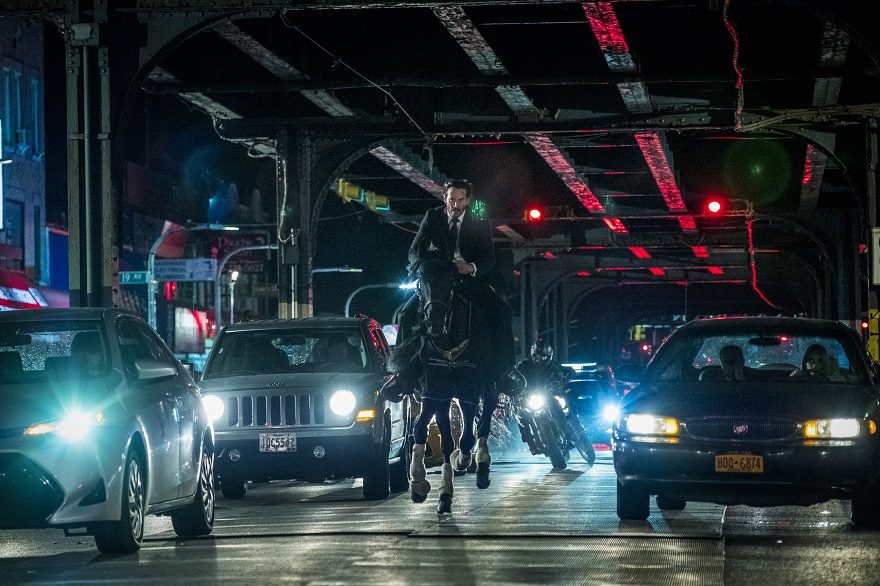 After the opening salvo, John makes a deal with a mysterious gypsy crime boss (Anjelica Huston, giving her all in a part that’s basically an extended cameo), and he’s whisked away to Casablanca to ask a favour of an old friend (played nicely by Halle Berry, in a role that should be bigger than it actually is) and seek the ear of the head of the assassin’s guild. It’s here that John Wick: Chapter 3 – Parabellum slows down, bouncing back and forth between Wick’s quest to stay alive and The Adjudicator’s quest to make sure those who helped John escape are appropriately punished, via the help of a skilled Japanese assassin (underrated martial arts legend Mark Dacascos, who’s never had a role this excellent in his entire career, Iron Chef included) and his school of shinobi’s.

The stuff in New York among the supporting characters (including Laurence Fishburne’s returning hobo crime boss) and away from John’s vision quest is actually far more interesting and familiar. Everything that happens on John’s diversion adds a lot of backstory that goes beyond the subtle world building of the first two films and dances dangerously close to becoming needless exposition dumps. Questions that no one had about the assassin world (like how its currency came into existence) are explained in needless detail. The action never fully stops here (and is arguably more brutal than it ever was before), but whenever Stahelski has to stop and explain something that may or may not be significant, the film briefly flounders before picking up steam again. It doesn’t kill the film, but the desire to turn the John Wick chronicles into an Avengers or Fast and the Furious style franchise are too blatant to ignore here.

Whether those stabs at franchise longevity ultimately pay off remains to be seen, but it does leave John Wick: Chapter 3 – Parabellum as both the most action packed and least satisfying entry in the series thus far. It’s not a let down in any way, but it’s clear that this entry in the series had more cooks in the kitchen. Series creator Kolstad shares writing credit with three other scribes from wildly different film and television backgrounds, and everything except for the opening and closing definitely has the markings of a film that has been made more by a committee of executives with eyes towards future installments (which most prominently includes an upcoming Starz series revolving around The Continental) and less like the vision of a handful of like-minded filmmakers. In a world where original ideas and ambitious, stand alone genre movies are becoming a rarity at the cinema, the first and second John Wick movies were a breath of fresh air. John Wick: Chapter 3 – Parabellum should’ve been a blow off to the original films’ tightly constructed narratives and a potential launching pad for new stories, but it instead serves as a platform to suggest that things are only getting started.

It sounds like I’m complaining about this. I’m not. I’m just ever so slightly worried about where things go from here. There’s still nothing else like this series in the marketplace today. It’s an exceptional work of action cinema, bolstered by what might go down as the best character the continually charismatic and physically capable Reeves has ever played. There’s more memorably staged action sequences here that I’d be more hesitant to spoil for viewers than the overall plot and mythology being laid out, which proves that the franchise still has its heart and mind in the right place. Do you want to see someone getting beaten down with a large book of Russian folktales, horses fighting side by side with our hero in unlikely ways, or someone comedically and repeatedly getting thrown through glass display cases like the world’s darkest Looney Tunes cartoon? If so, John Wick: Chapter 3 – Parabellum has you covered and then some.

Check out the trailer for John Wick: Chapter 3 – Parabellum: