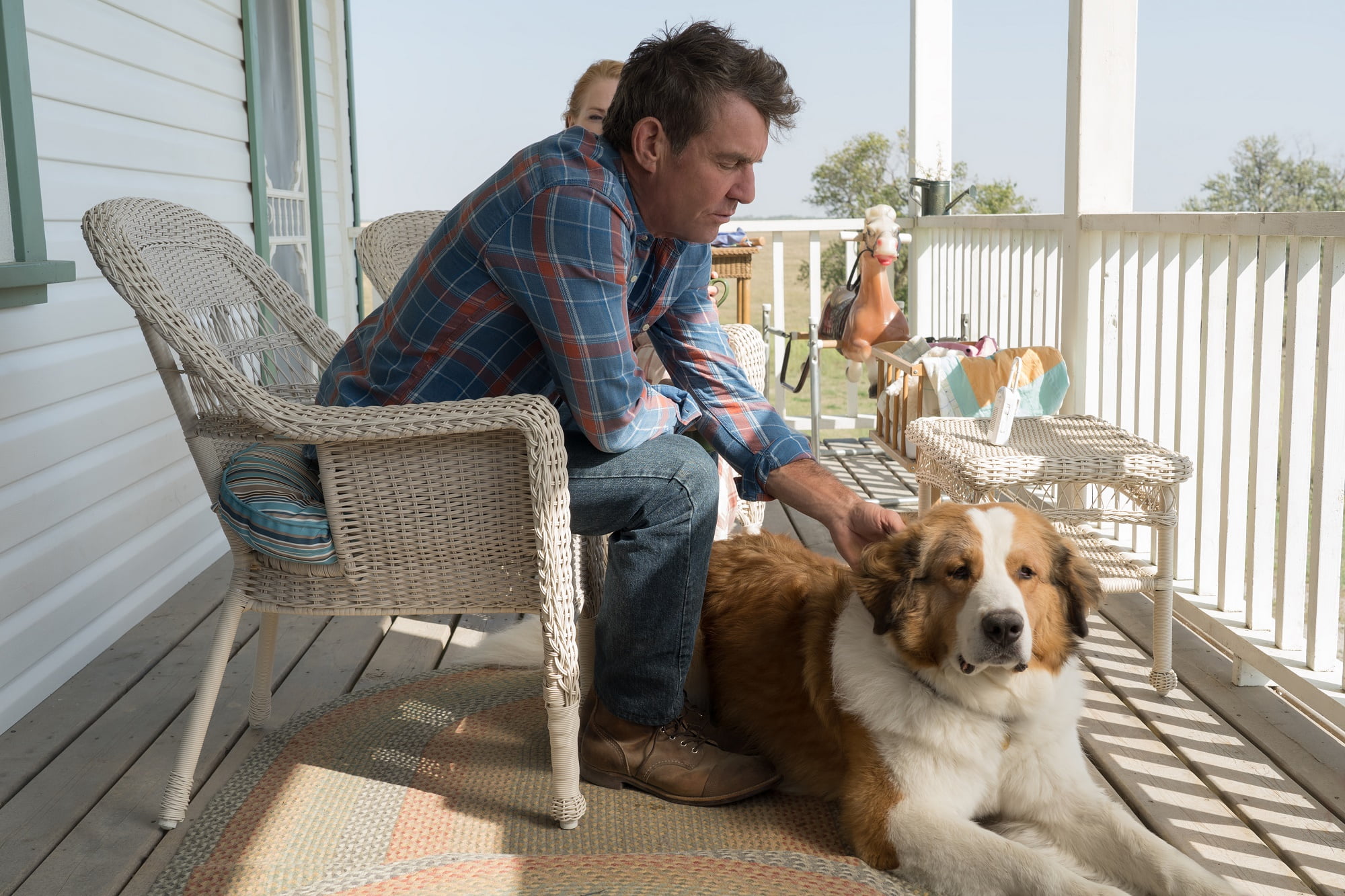 Like opening up a Hallmark card and getting sprayed in the eyes with napalm, the shameless and shameful sequel A Dog’s Journey will appeal only to those who like tears jerked from their face with maximum force and by any means necessary. It’s an inherently deplorable film disguised as a family friendly romp about the love shared between a dog and their human owner. There’s almost nothing to feel good about in this film, which uses repeated, ceaseless deaths and tragedies as a cover for lame jokes, hackneyed plot contrivances, and hollow emotional platitudes about how the things that don’t kill us make us stronger. It’s misery porn disguised as feel good entertainment for all ages, and it’s positively sickening.

First, a bit of clarification: A Dog’s Journey is the direct sequel to Lasse Hallström’s 2017 film A Dog’s Purpose, which was also unfathomably terrible, but somehow inexplicably still better than this. A Dog’s Journey is not a sequel to A Dog’s Way Home, which was released earlier this year by a different studio, despite both films being adapted from bestselling books by W. Bruce Cameron and sharing two screenwriters (Cameron and Cathryn Michon). A Dog’s Journey finds the entire, unnecessarily large four person screenwriting team (Cameron, Michon, Maya Forbes, and Wallace Wolodarsky) returning from the original effort. It continues the ongoing story of the wandering spirit of Bailey (voiced again by Josh Gad), a dog who died but keeps coming back to life in the form of other various puppers on a mission to get back to his/her master. Hallström isn’t back this time, replaced by Gail Mancuso, a television sitcom veteran making her style and substance free feature directorial debut by doing the bare minimum. (In fairness, A Dog’s Journey doesn’t even deserve the bare minimum, so Mancuso’s efforts are somewhat commendable.)

A Dog’s Journey opens with Bailey living a happy life on the farm with his aged owner, Ethan (Dennis Quaid), his wife (Marg Helgenberger), their daughter-in-law Gloria (Betty Gilpin, in a role so hysterically reprehensible it makes her character on GLOW seem like a candidate for sainthood), and their granddaughter CJ (Emma Volk). Ethan’s son (who I barely remember being mentioned in the previous film) died in a car accident, and has left the fame and fortune seeking Gloria distraught, alcoholic, and aloof. Paranoid that Ethan and his wife are going to try to take CJ and her dead husband’s inheritance from her, Gloria takes the child away from her grandparents and heads back to Chicago. Bailey dies yet again, and while he’s passing away, Ethan begs his beloved hound to track down CJ in his next life and watch over her.

The first act of A Dog’s Journey tricked me into thinking it was just going to be a duller, but not necessarily more offensive version of its predecessor, a film that repeatedly had to kill its cuddly main character to keep the story going like a sick riff on Quantum Leap or Edge of Tomorrow. (Note: Yes, I know that I have given good reviews to the John Wick films, the latest of which is out this week, and which has the death of a puppy as the inciting incident for its hero’s blood soaked revenge. But in those movies, the death has meaning and it only happened once. In A Dog’s Purpose and A Dog’s Journey, it happens repeatedly because no one gives a shit and our loved ones just come back to us anyway, apparently, so death means absolutely nothing in the DCU. That stands for Dog Cinematic Universe. If you call the DC Comics Universe the DCU, you’re forgetting that DC stands for Detective Comics, so it really should be DCCU, not DCU. And can you tell how little I really want to get back around to talking about A Dog’s Journey?) 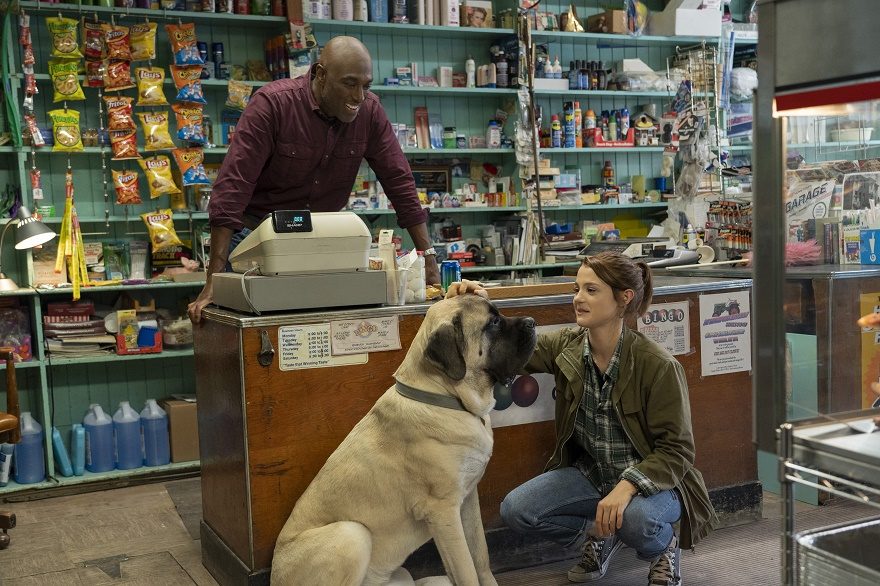 Anyway, the time spent with Quaid’s family and the dog’s first reincarnation alongside a pre-teen CJ (played by Abby Ryder Fortson) lasts for such a long time that I thought A Dog’s Journey would stick to a single storyline and just bore me rather than making me physically uncomfortable being in the theatre. Oh, how wrong I was. In its predecessor, it took a long time for Bailey’s soul to come back to his boy, offering a bunch of different scenarios where the dog was in the care of other owners and served different purposes, which was still gross to think about (and the subject of a considerable amount of controversy when footage of an animal being allegedly abused on set started making headlines), but at least it gave a reason as to why the story dragged along as much as it did. In A Dog’s Journey, only once is Bailey’s spirit ever far away from CJ, and that moment isn’t dwelled upon for more than a couple of minutes. A Dog’s Journey is so maddeningly and ludicrously convenient that it makes the first film seem like a grim and sobering slice of life story in comparison.

Come to think of it, grim and sobering are perfect words to describe the moral bankruptcy of A Dog’s Journey, a film that subscribes to the rule of threes in the strictest sense when it comes to spacing out its tragedies. These moments start off in the first act when Bailey is diagnosed with cancer, Gloria leaves, and the dog dies. (Spoiler: animals die in this movie. A lot.) It’s repeated again at the end of the second act when a now young adult CJ (Kathryn Prescott, giving the film’s only praiseworthy performance) has a falling out with her now comedically alcoholic mother, then is stalked by her abusive, drug dealing, douchebag ex-boyfriend (Jake Manley), and in the process of all this, the dog dies again. This same scenario plays out several times throughout A Dog’s Journey, a film that believes that the best time to hit viewers with the worst news possible is after they’ve already been crushingly broken down by life. I’m not saying that life is easy or that hard times are avoidable. This movie suggests that life is nothing but tragedy and we’re all going to die horribly and suffer up to that moment of sweet release from this mortal coil. At one point, Bailey muses that a person can’t be truly happy without a dog. A Dog’s Journey also suggests that life can be just as meaningless and awful if you do own one.

How does anyone find something like A Dog’s Journey – a true candy coated descent into the worst of humanity – at all inspirational or uplifting? How can one justify the entertainment value of a film that has to repeatedly tease a dog or a human getting beaten, hung by a leash, or nearly hit by cars just to goose the audience? How does one find strength by sneering at one-note, cartoonish villains who only exist to bring misery on underdeveloped, but generally good people? How is A Dog’s Journey not seen as a horror film? These questions are rhetorical, of course. Some people genuinely adore being manipulated to such soul crushing and empty extremes, and no one wants to see harm come to dogs, so on some level I get the appeal. There’s just no logical way to explain a movie like A Dog’s Journey to me.

But I also can’t stop thinking about the woman who sat behind me at the screening of A Dog’s Journey that I attended when I ask these questions. She was sobbing uncontrollably and audibly through the entire film, but even though she seemed to be “enjoying” what she was watching, by the fourth or fifth string of piled up tragedies, she seems to have enough. Through the tears, she audibly said to her companions “I can’t fucking take this shit anymore.” She didn’t leave or anything, but she was clearly being put through some sort of major emotional trauma. I guess the biggest question I’m left with when it comes to A Dog’s Journey – other than just what kind of hokey, poorly defined pseudo-spirituality the film is subscribing to – is just who would want to watch a movie that would make them feel like that? If you can say that you’re into hysterical sobbing with no cathartic or long term benefits from such a response whatsoever, maybe you’re the audience for A Dog’s Journey. It certainly isn’t for pet lovers or families. It’s for people who like to cry for the sake of crying.

Check out the trailer for A Dog’s Journey: