Every generation of young people has their own definitive party movie; an often uproarious celebration of friendship, youthful shenanigans, and rampaging hormones that mixes in bittersweet messages about leaving childish things behind and growing up. There was Animal House, Say Anything, Can’t Hardly Wait, and Superbad, just to name some of the most prominent examples in the genre. Booksmart, the debut directorial feature of Olivia Wilde, not only belongs in this pantheon, but it secures a spot at the top of the list. Teen comedies are rarely this smartly written, consistently hilarious, expertly performed, assuredly directed, culturally relevant, inclusive, and poignant. In short, Booksmart isn’t just a perfect teen flick, it’s a perfect movie in general.

So-Cal teens Molly (Beanie Feldstein) and Amy (Kaitlyn Dever) are best friends about to graduate at the top of their high school class. Always putting their studies ahead of their social lives, class president Molly and queer, social justice inclined Amy have been each other’s only friends thanks to their desire to focus only on their studies in an effort to get as far away from their hometown as possible. The end of high school also marks the last time they might see each other for quite awhile, with Molly eagerly attending Yale in the fall and Amy taking a gap year to do charity work in Africa not long after their graduation ceremony. When Molly realizes that all the kids she saw as slackers, doofuses, and burnouts got into similarly prestigious schools, she feels an overwhelming sense of regret. The headstrong Molly coaxes the much more reserved Amy into going to one of the big end of year parties being thrown by the cool kids so they can creams years worth of missed fun into a single night. The only problem: Amy and Molly never hung out with anyone else and they have no idea where the big blowouts are.

Booksmart combines the “one crazy night” and “teens eager to hook up” plots and turns them on their heads to create something wildly original. Instead of being a film about ordinary teens cutting loose or irresponsible kids doing increasingly irresponsible things, Booksmart might be one of the best movies to balance side-splitting raunchy humour with easily relatable truths about growing up and the sacrifices some young adults make for the sake of their futures. On one hand, Booksmart is one of the better films about overindulging, making a fool of oneself, and learning new and hidden secrets about the people we hold closest to us. On the other, Booksmart might be the only film aimed at young adults to talk openly and honestly about cultivating a work/life balance before they become robotic adults and the sometimes terrifying fear of missing out on the things that make being a teenager great. 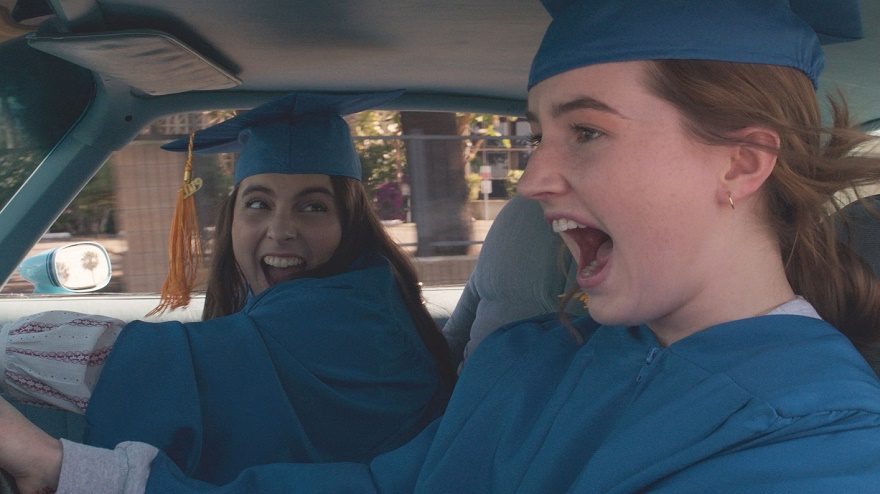 It’s easy to empathize with and understand Amy and Molly’s sense of entitlement, even if the latter is a purposefully abrasive Type A personality. From the opening to the conclusion, Amy and Molly are made out to be nerds who spent far more time looking over their test scores and the financial reports of the senior class than they did socializing with fellow students, but at least they’re self aware and confident fighting for things they genuinely care about. We can see that they worked hard for their respective futures. They’ve earned the right to take themselves perhaps a bit too seriously, and part of the fun of Booksmart is watching Amy and Molly finally cutting loose and doing something spontaneous. Molly and Amy are naturally funny and witty people who should have more friends than they actually do, but they followed some bad advice along the way and started believing their own bullshit. Booksmart succeeds because the script (penned by a team of four talented writers) paints these characters in a sometimes painfully relatable light. Booksmart is primarily a film about the evolution of a friendship, but it’s also a massive pressure release valve aimed squarely at young people (and certainly many adults) who could use a similar night of madcap fun to break up the monotony of their lives.

They joyful spontaneity contained within the script of Booksmart is perfectly captured by Wilde, who delivers one of the most surprisingly gorgeous, exceptionally paced, and ambitiously irreverent debut features that I’ve ever seen. Booksmart is the type of comedy that cycles wildly through tones, moods, and a variety of crazy set pieces, including a sad-sack yacht party thrown by the only kid in school who’s a bigger nerd than the heroes (Skyler Gisondo), a running gag involving a drugged out girl who’s seemingly able to teleport from place to place (Billie Lourd), hallucinogenic freak-outs, and a detour to a pretentious house party thrown by the requisite theatre kids. This says nothing about Molly’s secret crush on her class’ hottie, jock-tacular Vice President (Mason Gooding) or Amy’s flirting with a cutie skater-girl (Victoria Ruesga). It’s a plot with a lot of moving parts and shifting tones that often have to turn on a dime, and it requires a level hand to keep everything moving forward.  Booksmart feels like the work of a veteran filmmaker, not someone making the leap from short films, music videos, and acting. Assisted nicely by the razor sharp editing of Jamie Gross and stunning cinematography from Jason McCormick, Wilde has crafted one of the best looking and moving genre films in ages. Every decision made by the filmmaker elevates the already strong material exponentially. There isn’t a single filmmaking misstep to be found in Booksmart, and I await Wilde’s next foray behind the camera with great anticipation.

Booksmart also functions brilliantly as a platform to propel its two previously underrated character actor stars into meatier and higher profile starring roles. Anyone who has seen Feldstein on screen before knows that she can steal scenes from the best of them, but Booksmart gives her the chance to show her range as a commanding presence who’s more than willing to let her character run roughshod over anyone unfortunate enough to be in her path. Booksmart works even better as a showcase for Dever’s wide range of talents, which is rare when one considers that she’s largely playing the straight-woman to Feldstein’s slightly unhinged go-getter. It’s one of the few movies where the character who plays the second fiddle emerges as the bigger star. The chemistry they share is impeccable, and the film builds nicely to Amy’s eventual and well handled realization that her best friend sometimes pushes her around. They’re strongly written characters portrayed by actors who know their way around slapstick physical comedy and witty banter, but it’s the characters’ more intimate, awkward, and insecure moments that will leave just as big of an impression. Wilde might be doing a lot as a director behind the camera, but her stars in front of it are bringing just as much to the table.

Booksmart will be looked upon by a new generation of filmgoers as a teen movie classic, and I’m positive that a fair number of adults will agree. It’s the kind of film that I wish I had growing up, and one of the finest films of the year thus far. With a season of frequently bloated and increasingly mediocre summer movie blockbusters kicking into high gear, I have no problem saying that if you see any new release other than Booksmart this weekend, you’re doing it wrong.

Booksmart opens in theatres everywhere on Friday, May 24, 2019.

Check out the trailer for Booksmart: