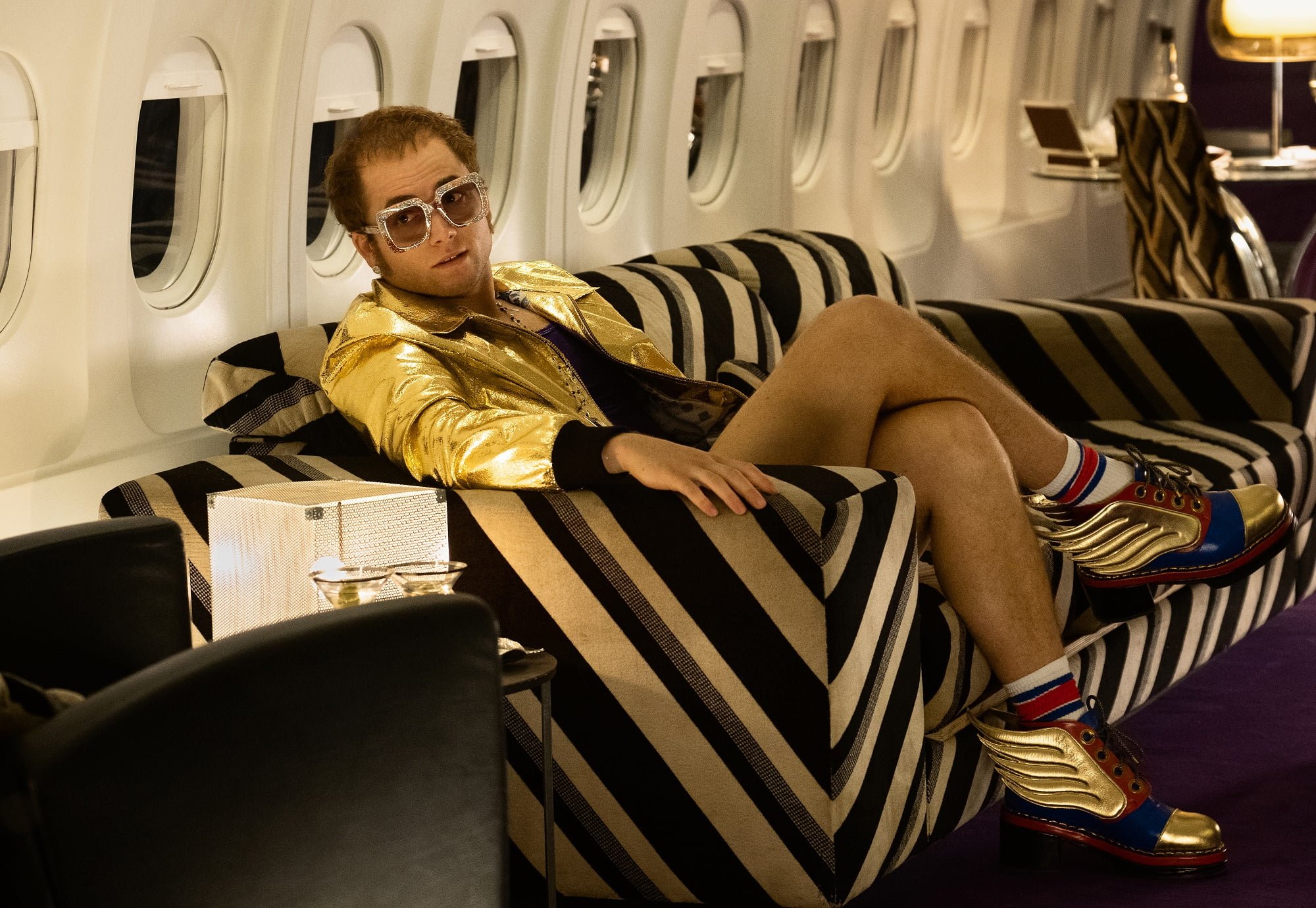 Rocketman, the Hollywood biopic of the life and career of Elton John, opens with its subject, played by Taron Egerton, kicking down a door and strutting down a hallway, decked out in a bright orange jumpsuit with bright red angel wings and garish devil horns affixed to his head, all set to an orchestral arrangement of the most memorable musical bit of the singer’s smash hit “Goodbye Yellow Brick Road.” He looks like a man on a mission and an absolute force of nature, and indeed the bombastic, shot calling opening and cheekily handled following scene where we see where John is actually heading sets the tone for what audiences can expect from Dexter Fletcher’s film.

And what a film Rocketman is; possibly the best full-on musical phantasmagoria about a famous person destroying and reclaiming their life since Bob Fosse’s All That Jazz. It’s pure populist entertainment of the highest quality that’s easily accessible to those who find comforting familiarity in genre cliches, but also one of the most beguiling and alluringly strange works of mainstream cinema in ages. The rise and fall of Elton John could’ve provided any number of prestigious, journeyman, or hack directors with a great deal of emotional or cinematic fodder, but Rocketman is truly a work of bracingly honest and visually stunning art that’s willing to go above and beyond the norm. Much like Elton John himself, Rocketman is undeniably “extra,” but it’s also a film that constantly makes bold, sweeping decisions that pay off at every turn and suitably profile the man Fletcher seeks to honour.

Rocketman doesn’t claim to be the definitive recounting of every major event in the life of Elton John, but rather an overview of the first thirty or so years of his career, beginning with his “relatively happy childhood” as Reginald Dwight in England, through to the highs and lows of his fame, and following along to his recovery from alcohol, sex, and drug addiction in the early 1980s. More interested with who Elton John was as a person and creating an honest, but brazenly hyper-stylized film around the larger-than-life stage persona he would cultivate across his career, Rocketman isn’t a film about the creation of his back catalogue of hits. Sure, Fletcher (Sunshine on Leith, Eddie the Eagle) will oblige and be forthcoming with said hits, but Rocketman isn’t expressly about the music. It’s a film about the relationships that strengthened and weakened John’s resolve over time, which is far more interesting and resonant subject matter.

Elton’s relationship to his mother (played by Bryce Dallas Howard) is in a constant state of fluctuation throughout his life, while the one the singer has with his estranged, hardscrabble father (Steven Mackintosh) was one of a son trying desperately to earn some degree of affection and interest from his parent. Once his career as a piano player starts taking off – after years of playing in pubs and performing in back-up bands for soul singers travelling across the UK – he strikes up a kinship with songwriter Bernie Taupin (Jamie Bell), forging a fifty year working relationship and friendship that endures to this day. Along his road to becoming one of the best selling recording artists of all time before he hit the age of twenty-five, he meets and falls madly in love with John Reid (Richard Madden), who would go on to become John’s business manager in a relationship that would become physically, emotionally, professionally, and financially abusive, causing Elton to spiral further into self-loathing, burnout, and addiction.

Each of the formative relationships depicted in Rocketman are portrayed as contributing to the person Elton John wanted to be as he ascended to the top of the pops. It’s clear that Elton gets his flamboyance and no-bullshit demeanour from his mother and a healthy dose of paranoia and self-hatred from dad. In Bernie Taupin, John finds something more valuable than constant validation: a true, unwavering friend who knows when to stand alongside and when to keep a healthy distance. In John Reid, Elton has lustful desires filled, but finds his overall desire to be loved, accepted, and cared for by another to be woefully underserved. These relationships don’t fully reflect the songs Elton John sung, but Rocketman instead paints them as being his reason for living, suffering, and ultimately moving on with his life. It’s a humane approach to biography (and hagiography, if we’re being honest) that most films pitched at the same level as Rocketman either neglect or avoid. It dares to show how artistic success and failure on John’s level of superstardom doesn’t happen in a vacuum.

Unlike the tremendously underwhelming and ineffective Bohemian Rhapsody (which was actually finished by Fletcher when that film’s original director, Bryan Singer, went AWOL), Rocketman isn’t placing a bunch of recognizable tunes on a pedestal and leaving little connective tissue between them. There are no ridiculous or risible sequences where Elton John sits down with Taupin to hash something out, or moments where he fights with one of his partners, only to sit down at the piano moments later to bang out another hit. It’s not a film that wants to skirt the fact that Elton John was gay or that his desire to be loved as a showman nearly killed him several times over. Yes, there are scenes where a callous record executive repeatedly tells John and Taupin that their work isn’t up to snuff and that they won’t amount to much, but that’s really the film’s only easily overlooked misstep, and a scene that’s still treated with just the right blend of seriousness and humour. 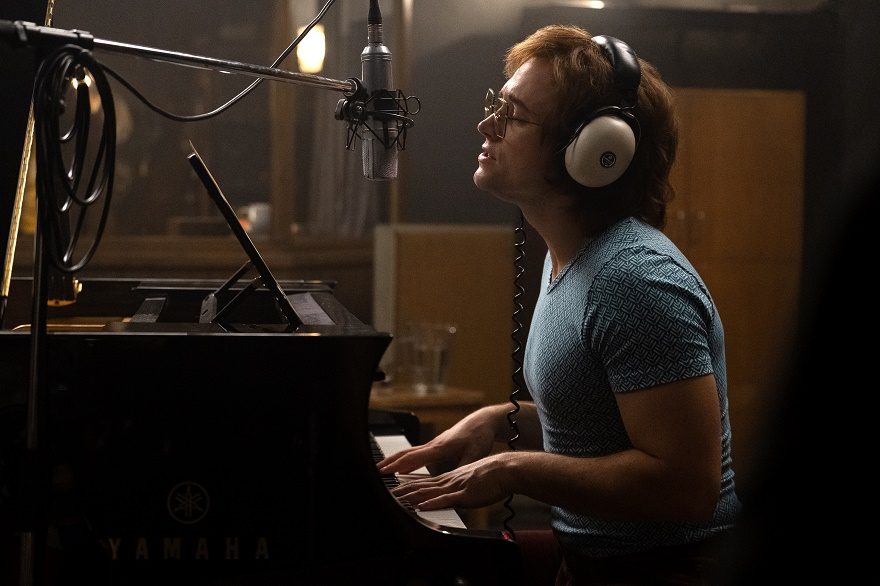 Rocketman, scripted brilliantly by Lee Hall (Billy Elliot, War Horse), follows the timeline of John’s life more or less in the order that things happen, but as a musical, the choices are a lot more eclectic. Rocketman bounces back and forth between eras musically to find songs that can effortlessly transition viewers from the story at hand and into more dreamlike and sometimes surreal territory. One of John’s later tracks, “I Want Love,” is actually employed towards the top of the film, and is turned into a singalong delivered by the entire Dwight family. “Saturday Night’s Alright for Fighting” is a showstopper that shows John’s transition from an adolescent (played nicely by Kit Connor) to an adult by moving from a barroom brawl to an all out dance number at a carnival. “Tiny Dancer” gets scaled down in scope and context to reflect John’s loneliness at a party, and hits like the titular track and “Bennie and the Jets” are given almost painterly and apocalyptic visuals that make it seem as if John is descending straight to hell while in the throes of addiction and stress.

Fletcher directs the hell out of these musical sequences, assisted brilliantly by the cinematography of frequent collaborator George Richmond, elaborate choreography from Adam Murray, some impressive production design, and wonderful, spot on costuming from Julian Day (whose detail oriented work comes into nifty focus during the film’s closing credits). Fletcher knows that biopics sometimes play fast and loose with the facts of a subject’s life, so he cleverly decides to jumble up and recontextualize John’s works in new and bracing ways. If Bohemian Rhapsody’s all-too-safe depiction of Queen’s songs were a watered down cup of tea and dry piece of plain shortbread, Rocketman’s use of John’s songs are like a quadruple espresso paired with a black forest cake frosted in cocaine. Like John’s impassioned and grandiose on stage performances, Rocketman wants the viewer to be as entertained as possible, but it also wants them to experience the biggest emotions possible. It’s a perfect approach for a genre that has grown tiresome, stagnant, and resigned.

As for the cast of Rocketman, Howard, Madden, and particularly Bell are all delivering performances that rank among some of their best, but there’s no mistaking the fact that Egerton is operating at the highest level of acting possible. Not only is the young actor adept at portraying John’s flights of fancy, his quick temper, cheeky sense of humour, or how he oozed confidence and charisma, but he’s also careful to never devolve into caricature or outright impersonation of his real life counterpart. While Egerton has clearly studied his performance right down to some uncannily rehearsed facial expressions (seriously, he even knows how John moves his mouth, which is unreal to behold), it’s a performance that’s far from robotic.

Egerton has been given some degree of freedom to allow his performance to seem natural and uninhibited, which is exactly how John’s persona should come across whenever the singer isn’t on stage. When Egerton has to deliver the film’s musical numbers, he’s actually singing them in his own voice, which adds a lot of depth, personality, and room for the actor to reinterpret the materials at hand alongside his director. Naturally, using his own voice to sing adds a tremendous amount to Rocketman, but it’s the little character flourishes Egerton finds that are just as memorable. In an age where most celebrities offer up rigidly constructed impressions of other famous people when making biopics, Rocketman soars precisely because Egerton seems to have been possessed by the spirit of John rather than completely beholden to a set of bullet points. It’s nothing short of astonishing to behold.

Rocketman is the kind of film that I could gush lovingly about for hours; picking apart every scene and every detail and finding more to praise with each viewing. It’s so forceful, entertaining, weird, and elegantly composed that it almost demands repeat viewings. It will assuredly leave John’s fans happy with the results, but that’s almost secondary to Rocketman being one of the best overall films of the year. I love everything about Rocketman, and I can only hope that it connects with audiences to a point where we can get more biopics and musicals that are as creative and original as this.

Rocketman opens in theatres everywhere on Friday, May 31, 2019.

Check out the trailer for Rocketman: