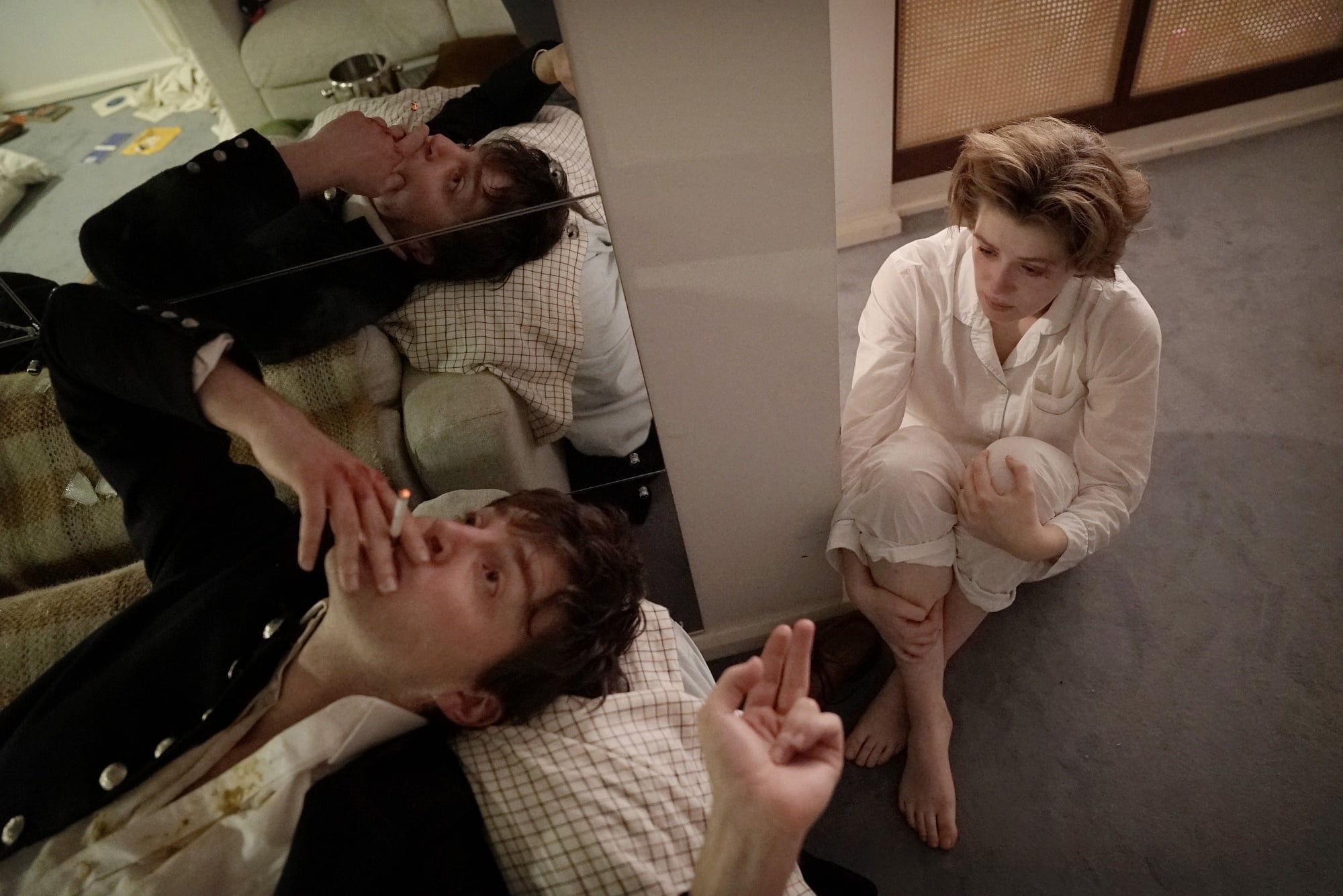 The Souvenir, the superlative fourth feature from British writer and director Joanna Hogg, is one of the most uncomfortably realistic and heart rending looks at young love ever put to film. Hogg’s semi-autobiographical retelling of her years as a young filmmaker in the early 1980s and the relationships that impacted and shaped her along the way, The Souvenir is both astoundingly personal and eminently relatable. Early on in The Souvenir, a character bluntly states that people don’t want to see movies that depict life as it is, but rather that they want to see representations of said life. The Souvenir is a masterwork that suggests that both emotional extremes can exist simultaneously and harmoniously; blending the rigorous and the dramatic with startling and disarming ease. This is the work of a filmmaker who isn’t holding back in the slightest, despite its overall quiet and modest tone. It’s delicacy and power cannot be understated. The Souvenir is truly a marvel to behold.

Julie (Honor Swinton Byrne) is a well-to-do young woman and film school student from London who desires to make a verite-style drama about the working class dockhands in Sunderland. In the midst of her filmmaking process, she meets and begins a relationship with Anthony (Tom Burke), a closely guarded, somewhat older man who works for the UK’s foreign office. Their personalities couldn’t be any more different, but their relationship somehow endures, even when there are clear warning signs that Anthony’s withholding of personal truths is detrimental and damaging to Julie.

Hogg (Unrelated, Exhibition) has found an interesting way to pace and shape the character study at the heart of The Souvenir. Instead of walking viewers through every detail of Julie and Anthony’s relationship – which includes numerous instances of falling out and coming back together – Hogg only includes the moments in her protagonist’s life that have left the biggest impressions, scars, and successes. Most of the filler and banter has been excised, but all of the context still remains. The Souvenir is effectively contemplative and reflective in ways that few works of cinema and literature are, blending quiet and seemingly insignificant milestones with the moments that often stick out in the minds of young people experiencing love for the first time, whether for better or for worse. It’s a film that both depicts life as it is, while dramatically framing exactly how it feels for those experiencing that life. It’s the goal that Julie seeks throughout the film. Hogg suggests that by framing The Souvenir only through Julie’s thoughts that the young woman is living the life she wants to depict on screen, but she can’t realize it thanks to her complicated relationship with Anthony.

At its heart, The Souvenir is a painstaking look at codependency at its most extreme and destructive. What exactly is wrong with Anthony – who’s relatively passionless, but could be seen by some as being intellectually desirable – isn’t immediately apparent and not laid bare until a bougie, heavily lubricated dinner party guest (played nicely by a cameoing Richard Ayoade) lets the truth slip. From there, the viewer will naturally question why Julie chooses to stay with Anthony, but Hogg is careful never to pass judgment on either of them.

The problems actually start before that. Julie, who sees her art as a form of therapy, is asked point blank by Anthony if she thinks those feelings make her somehow special, and that’s exactly the moment The Souvenir snaps into focus and never looks back. It’s a serious question that Anthony doesn’t seem to ask maliciously, and Julie responds earnestly, but to the viewer (who might’ve been through such a relationship before), it strikes as an immediate provocation. While Julie is vastly more sympathetic (even in Hogg’s eyes as the storyteller), there’s plenty of frustration and disappointment to go around as they go through the highs and lows of an ultimately unhealthy relationship. It’s a film that values people over plot and constantly gives validation to the complicated emotional experience at hand. In short, it’s almost too real to bear. 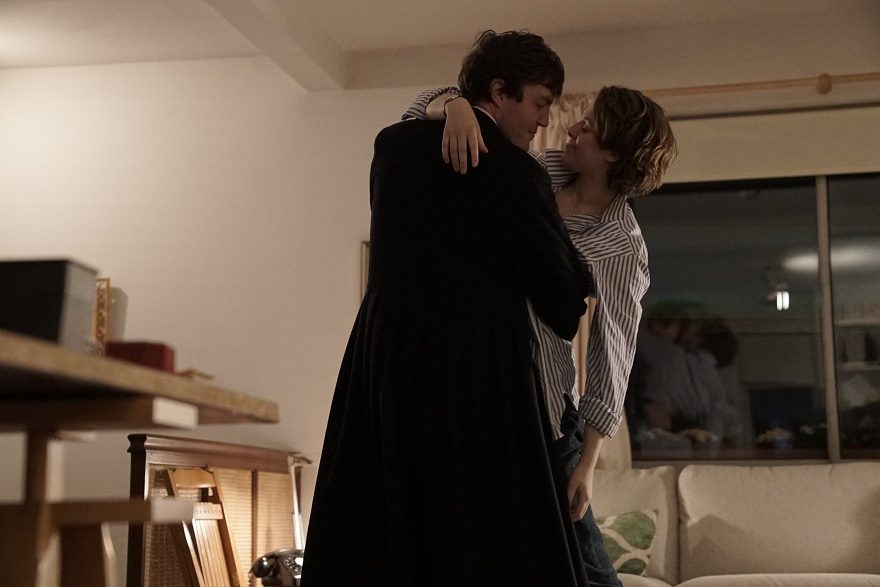 The Souvenir feels like a young person’s movie made with the wisdom and grace of someone who has lived through such a situation to talk about it in an eloquent, almost poetic fashion. There’s plenty of rather on-the-nose foreshadowing and symbolism throughout The Souvenir (both visually and narratively), but that’s precisely how young people see the world around them, and how older people sometimes colour and skew reality when looking back on their younger days. They might recall dialogues that occurred word for word, but they can also remember the moments when they didn’t, but should’ve, walked away from an increasingly fraught situation. Moments where Julie looks over some of her still photographs, oblivious to the fact that Joe Jackson’s “Is She Really Going Out With Him” is playing on the radio in the background, a strangely appropriate class exercise where the main character makes a not incorrect comparison between her plight and the work of Alfred Hitchcock (who knows a thing or two about unhealthy codependency), or when Hogg makes a cheeky visual parallel between square, antiquated “grand theatre” and gorgeously photographed, detail oriented, but passionless sex might be obvious choices, but they’re never played out in a manner that would draw attention to their conventional employment. The Souvenir is a subtle film about people who have harsh truths staring them in the face, but they’re unable to notice or emotionally engage with them in an effective, cathartic, resulatory manner.

No filmmaker today uses negative space as a visual metaphor quite like Hogg. Many directors try to employ such tactics with no subtlety whatsoever in a bid to illustrate physical and emotional distance and dissonance, but Hogg, who’s aided brilliantly by cinematographer David Raedeker, has mastered the art. There’s always a healthy distance between Julie and everyone around her, even in intimate moments, but always something interesting fills the space; be it clothing, cluttered shelves, windows, mirrors, desks, or dinner tables. One of the most fascinating, unspoken aspects of The Souvenir is how Hogg makes the subtle, but not insignificant act of making Julie touch or embrace something into a powerful and meaningful act. It’s a perfect choice for a perfectly told story.

The Souvenir also has plenty to say about the ways women have traditionally been held back when it comes to artistic or political expression, while simultaneously giving the film’s female characters an ample platform to share their ideas and thoughts with a receptive audience. Julie always finds her work challenged and her contributions maligned, but this is best exemplified during a visit to the protagonist’s childhood home. When Julie and Anthony show up at her parents’ house for dinner, her mother, Rosalind (played by Byrne’s off-screen mother, Tilda Swinton, in a small, but vital and impactful role) is told that she’s flat out wrong in her opinions about the ongoing Troubles in Northern Ireland, and is more or less forced into saying that her husband’s opposing viewpoint is “refreshing.” The two men and two women at the table are very similar, with the older adults offering a glimpse into the future of their younger counterparts.

Burke is pitch perfect as the aloof, tragically flawed, and sometimes even detestable boyfriend, but it’s Byrne who’s a bigger revelation. Much like her mother, Byrne is able to say more with a single, silent expression that reams of dialogue ever could. She has a natural talent for understatement, and even the biggest emotional outbursts in The Souvenir feel raw rather than melodramatic. In every scene, Julie is piecing together in her mind how she feels about every situation at hand and how she should accordingly react. It’s a testament to Hogg’s material and Byrne’s talents as a performer that this visual approximation of Julie’s complicated thought process never comes across as an actor trying to figure out where to take the scene next and always looks like a character empathetically and sometimes charitably piecing together their disappointment or displeasure. Byrne frames the film almost as much as Hogg does. Whether Julie is going to outwardly express those feelings can change from scene to scene and through a variety of different circumstance. It’s a hard part of human nature that few filmmakers and actors try to convey on a level like this, but Byrne makes it seem frighteningly effortless.

The Souvenir is a work of emotional and intellectual brilliance that will leave viewers devastated. Even if they don’t understand why Julie stays with Anthony after all evidence suggests she should leave, viewers will feel and experience every bit of the journey as if it were happening to them. It’s almost too much for a single film to contain, which is probably why Hogg is deep into production on a sequel to The Souvenir. It sounds like a strange point of comparison, but I haven’t been this excited to see a sequel since the first entry into the John Wick franchise. They’re vastly different films, but I mean that as high praise, regardless. Just as John Wick redefined how we see action and art working together in tandem, The Souvenir raises the artistic bar immeasurably for any films about complicated romantic relationships that have the unenviable task of following in its wake.

The Souvenir opens at TIFF Bell Lightbox in Toronto and Fifth Avenue Cinemas in Vancouver on Friday, June 7, 2019. It expands to Montreal on June 14th and to additional Canadian cities throughout the summer. TIFF Bell Lightbox will also be holding a retrospective of Hogg’s three previous films from June 7 to 11.

Check out the trailer for The Souvenir: