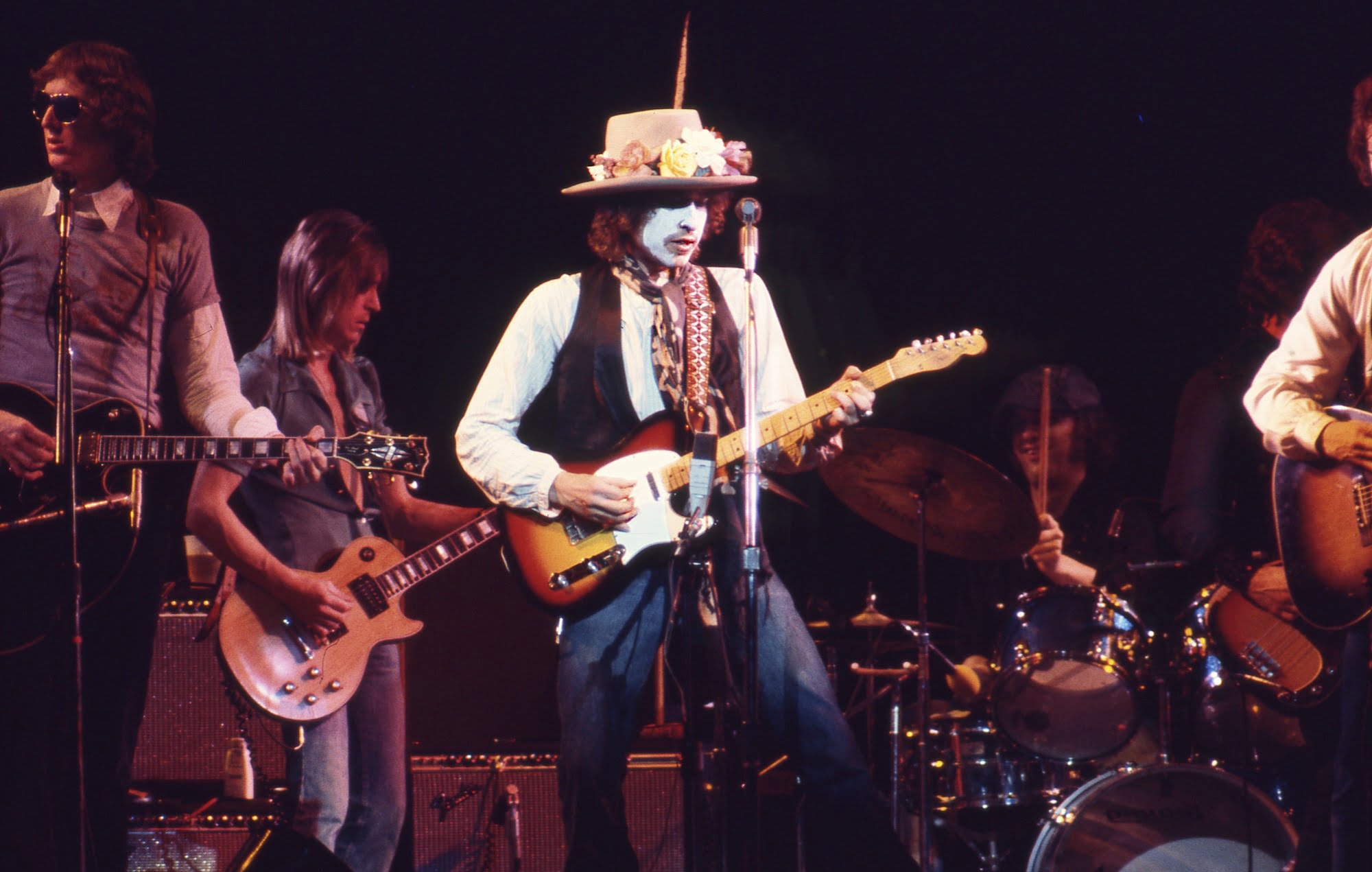 A cheeky and sometimes deliberately obtuse reworking of documentary conventions from a master filmmaker, Rolling Thunder Revue: A Bob Dylan Story by Martin Scorsese offers a fitfully weird, but largely factual look back at one of the most divisive and unique tours in the history of rock and roll. Blurring the lines between fact and myth in ways Dylan would surely approve of, Scorsese’s Rolling Thunder Revue is part history lesson, part concert film, part self-knowing satire, and part grand theatre. While it doesn’t entirely measure up to some of Scorsese’s best documentary works (including his previous, more comprehensive retrospective of Dylan’s early years, No Direction Home), Rolling Thunder Revue is a faithful, dutiful look back at how the singer-songwriter’s most ambitious (and probably foolhardy) tour was a reflection not only of the artists who participated, but the very country the musical caravan criss-crossed across.

In 1975, Bob Dylan was putting together his first major headlining tour in over a decade and his first overall outing since touring with The Band in 1966. Arriving just in time for America’s bicentennial celebrations, the tour was meant to be an eclectic, offbeat, and irreverent melting pot of various different musical, literary, filmmaking, and performing arts talents coming together to put on a commedia dell’arte of sorts, and featuring some of Dylan’s most theatrical and purposefully strange performances. Rolling Thunder Revue (which was managed predominantly by a woefully inexperienced fishmonger friend of Dylan’s) would feature no less than fifteen different acts – including spoken word performances from Allen Ginsberg – and the tour would kick off in the unlikely, but obviously symbolic location of Plymouth, Massachusetts. The tour (which, depending on how one looks at it was either a daring artistic success or a tremendous money loser) would sometimes bypass major metropolises in favour of smaller markets, indigenous reservations, correctional facilities, and any number of other “oddball” locations. Whether one loved, hated, or couldn’t make heads or tales of the shows, Rolling Thunder Revue was nothing if not a piece of memorable musical history that couldn’t be duplicated or attempted ever again.

Scorsese opens up Rolling Thunder Revue with a seemingly unrelated clip of an old-timey magic show and a title card stating that the film would be “a conjuring” of the tour, and the film that follows is indeed a nifty sleight of hand trick that would make carnies and professional wrestling promoters grin with glee. Rolling Thunder Revue is built around a treasure trove of gorgeously remastered and salvaged archival material shot during the tour’s numerous shows that had remained largely unused for decades (save for some footage that made it into Dylan and Sam Shepard’s critically lambasted-then-reappraised experimental effort, Renaldo and Clara), but it’s also playing with audience expectations. There are plenty of hard, provable truths throughout Rolling Thunder Revue, but also lots of statements that are easily refuted, contradicting viewpoints, and general overall inability to define exactly what the tour meant in the greater context of American musical history. Even Dylan, who gives a better interview here than he has in decades, can’t adequately describe the vibe and mission statement of Rolling Thunder Revue, and the troubadour suggests that we don’t try to make any concrete sense of it at all. 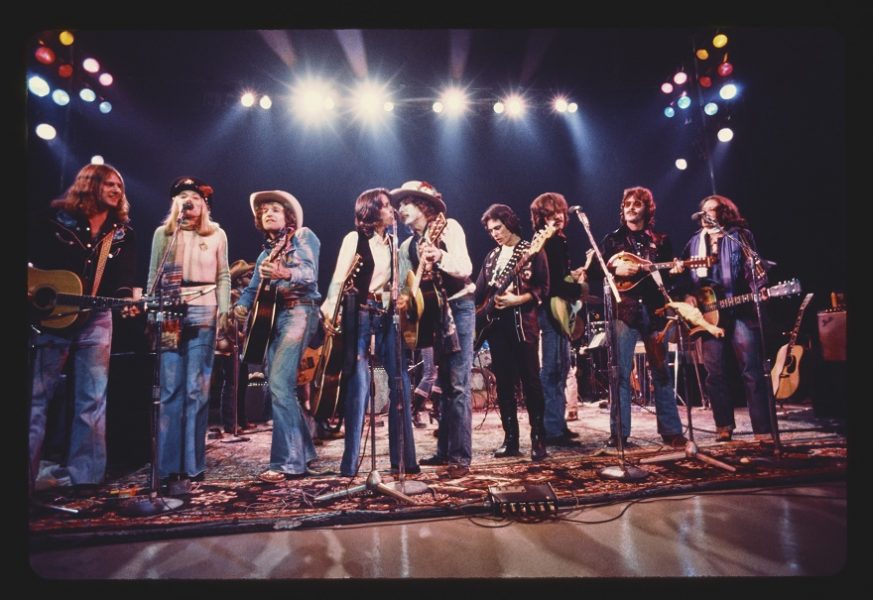 For the Rolling Thunder Revue shows, Dylan would often sport face paint or a mask during his performances, subscribing to the belief that anyone covering their face was probably being truthful and honest with their words and deeds. While Dylan was savvy when it came to taking bits and pieces of inspiration from the world around him to inform and evolve his work, he might actually be humbly underselling his travelling show’s place in pop culture history. Rolling Thunder (a name which in and of itself is already a metaphor for speaking truth) came at a particularly demoralizing point in American history. Following the fall of Saigon, signalling the end for the contentious Vietnam War effort, and the Watergate scandal, Americans didn’t really know what they should be celebrating during the country’s heavily hyped bicentennial. Everything seemed to be in a state of flux, including the popular culture and fine arts worlds. While the wide array of performers who took the stage during the Rolling Thunder Revue seemed on paper like an atonal mish-mash of styles and tones, that was part of Dylan’s point. Things didn’t have to make sense here as long as people were coming together and speaking the truth. If the leaders of the country were going to keep lying to the American people, what role was to be played by honest artists?

Sure, not everything here is truthful, and even Scorsese is playing an amusing trick on the audience that’s not actually explained explicitly, but is somewhat easily unravelled through a close reading and examination of the film itself. Even as a backstage look at Rolling Thunder Revue, including dozens of deep dive interviews both past and present with those who lived through the tour, it isn’t anything special or particularly illuminating. There were always concerns that Dylan was biting off more than he could chew, especially after alienating his previously loyal folk fanbase years prior to this. Some people adored each other, others couldn’t stand being in the same room at the same time, and some people loved each other a bit too much. The concert performances have new life breathed into them thanks to the restoration, but they’re still not anything greater than usual when it comes to these sorts of documentaries. Some of the tour’s key players – most notably Ginsberg, Patti Smith, and Joan Baez – are made out to be more fascinatingly complex than Dylan was, while others blend into the larger cast of background characters. Like the tour itself, there’s almost too much for Scorsese to sink his teeth into, with the film eventually losing steam as it heads towards a conclusion that heavily relies on topics that have been covered in better ways elsewhere.

Overall, Rolling Thunder Revue is too complicated for its own good, which detracts from its merits as a documentary, but also offers a fitting counterpoint to Dylan’s tour. The Rolling Thunder Revue was an ungainly show from the looks of it, but it was also meant to inspire a sense of community and unity among everyone on and off the stage. It’s a narrative that’s both easy to assemble for a filmmaker as seasoned as Scorsese, but also virtually impossible to fully comprehend, no matter how hard the effort. It was a tour that wanted to hold up a magnifying glass to America at the time while simultaneously defying any sort of hard and fast analysis. It’s a mess, but it’s a glorious and well intentioned one; both the tour and the film about it.

Check out the trailer for Rolling Thunder Revue: A Bob Dylan Story by Martin Scorsese: