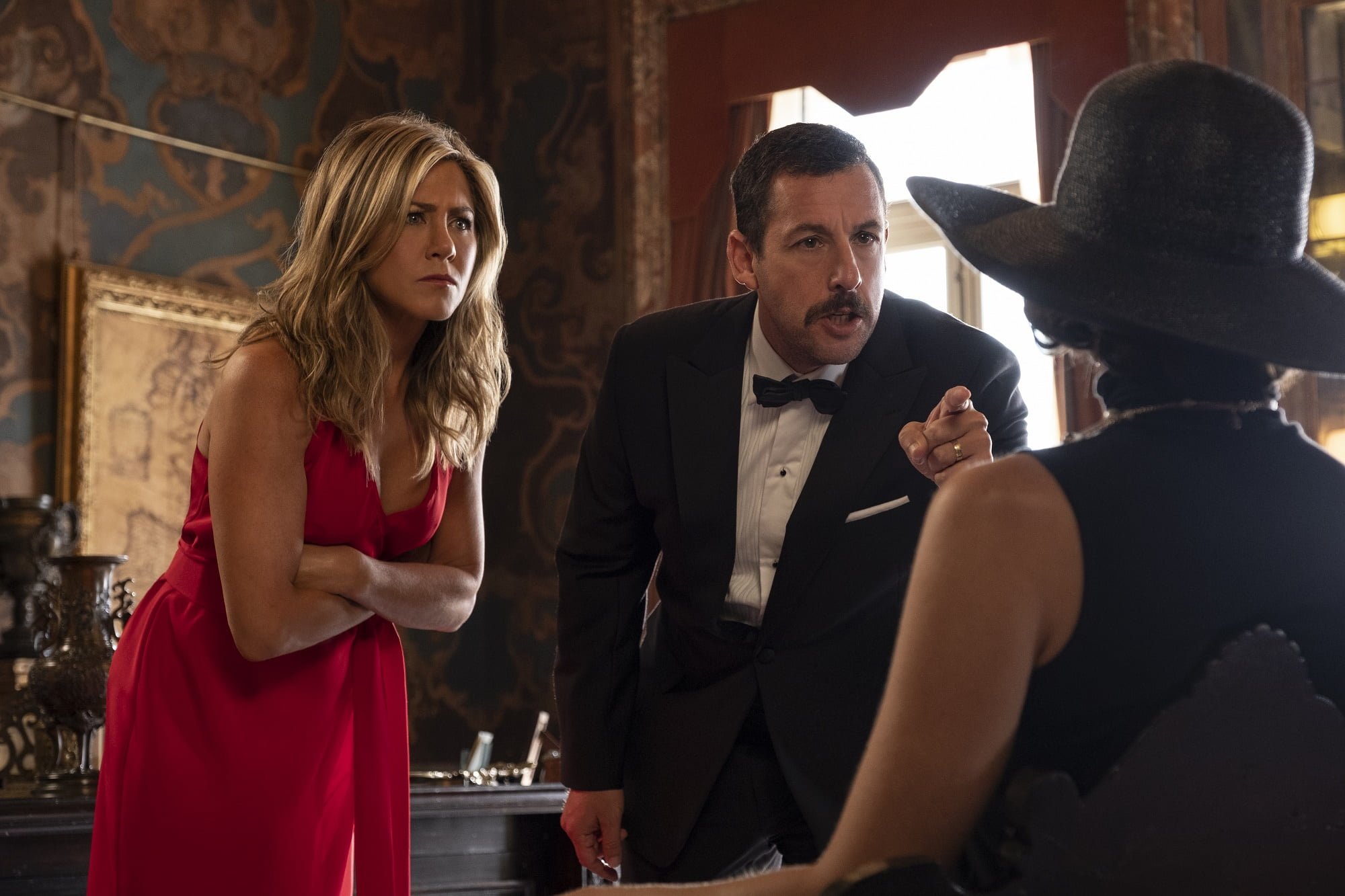 Although it gets off to a bit of a shaky start, the comedic thriller Murder Mystery manages to settle into an entertaining groove once the titular game is afoot. The latest film to come from Adam Sandler’s current output agreement with Netflix (and best if one discounts Noah Baumbach’s The Meyerowitz Stories or his surprisingly strong stand-up special), Murder Mystery isn’t particularly suspenseful or all that much of a mystery, but it’s fitfully fun, funny, and engaging. It’s perfectly suitable for watching on a slow day or rainy evening as a piece of fluffed-up comfort food.

Sandler re-teams with his Just Go With It co-star Jennifer Aniston (with much better, less annoying results this time) as Nick and Audrey Splitz, a pair of New Yorkers and stereotypically uncultured American boors. He’s a beat cop who’s failed the detective’s exam three times, a fact that he’s trying to keep from his wife. She’s a hairdresser who loves mystery novels. They’ve been married for fifteen years and still haven’t gone on their honeymoon, something she’s getting antsy about. For their anniversary, Nick caves in and books them the cheapest European getaway he can find. On the plane ride over, Audrey befriends Charles Cavendish (Luke Evans), a charming first class passenger travelling to attend a party thrown by his billionaire father (Terence Stamp) onboard the family’s yachy, en route to the Monaco Grand Prix. Charles invites the hapless, but game Audrey and Nick to join him, raising the eyebrows of most of the party’s guests. When the cantankerous and not particularly well liked old man tells everyone at the party that they’ve been written out of his will, the lights go out and a struggle ensues. When the lights come back on, the old man has been stabbed with a ceremonial dagger. Everyone has their reasons for wanting the billionaire dead, except for Nick and Audrey, who end up becoming prime suspects in the eyes of the case’s French investigator (Dany Boon) precisely because they had no reason being there in the first place.

Murder Mystery doesn’t make a great first impression, loading up its first thirty minutes with more clunky, rapid fire exposition than a film like this probably needs to succeed. Screenwriter James Vanderbilt (Zodiac, The Rundown, Truth) can’t figure out how to organically flesh out Nick and Audrey as people, so the script crams all we need to know about them into an uninteresting, uninspired fifteen minute opening whirlwind, packed with an alarming amount of product placement for Uber Black, Labatt Blue, Flamin’ Hot Cheetos, Monster Energy, Claratin, and most strangely of all for a Netflix production, Amazon. It’s not until the protagonists touch down in Spain that Murder Mystery starts to loosen up and become entertaining. 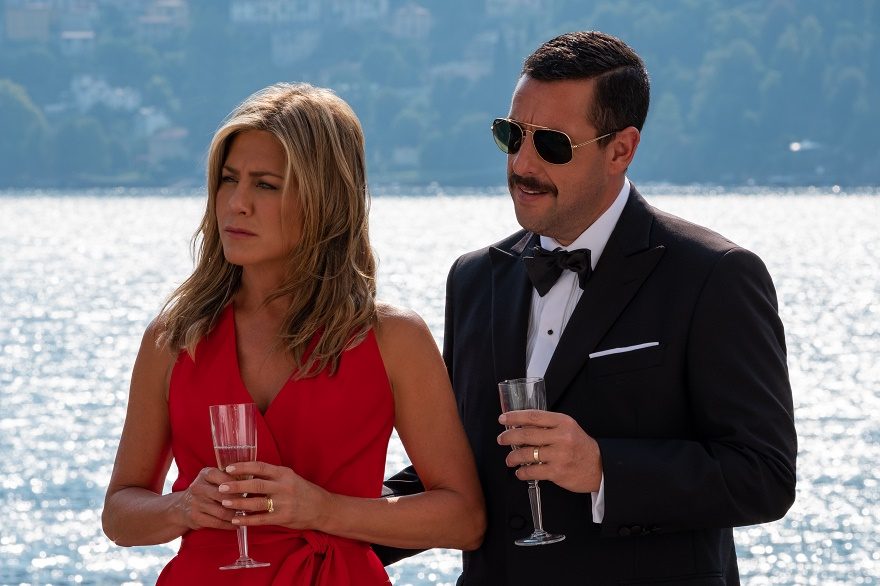 Murder Mystery is the type of whodunnit where everyone has a distinct reason for wanting the victim dead, and it’s only a matter of time before everyone’s cards are placed face up on the table, and Nick, Audrey, and the viewer can piece it all together. (Hint: the film actually gives the murderer away pretty early, if you’re paying attention.) There’s Charles, the old man’s disappointing gay son (David Williams), Charles’ former fiancee and his uncle’s current flame (Shioli Kutsuna), an aging B-movie starlet (Gemma Arterton), a Maharaja who speaks almost entirely in British street slang (Adeel Akhtar), a dunderheaded Formula One driver who worked for the victim’s race team (Luis Gerardo Mendez), and even a Namibian colonel (John Kani). They all play their parts well, but Akhtar and Mendez are the two who end up stealing the bulk of the scenes they share with their costars. At any rate, the film is at least wise enough to realize that a mystery needs a cast of interesting, fully drawn characters to succeed, so no one gets the short end of the stick here.

Once the mystery kicks in, Vanderbilt’s screenplay turns into an enjoyable riff on Agatha Christie and everything feels a lot more at ease. Director Kyle Newacheck (Game Over, Man!) adds some slickness and style to Murder Mystery. It looks a lot like a music video at times, but it contrasts nicely with how seriously these characters carry themselves in such a silly and implausible story. It also makes the most of its European locations, something that most of Sandler’s previous “paid vacations disguised as movie shoots” often ignore in favour of making the leading man mug some more.

Sandler is surprisingly good as the sarcastic, perpetually unimpressed Nick – in a role he could’ve easily sleepwalked through, but doesn’t – and Aniston provides a solid counterpoint with Audrey’s high strung eagerness and frustration. Murder Mystery certainly gives the duo more to work with than they had in Just Go With It, and their chemistry here is a lot more believable now that their characters are amped up and a bit goofier. They even make a bathroom argument about going on a tour of a meat curing plant into one of the film’s more amusing moments. They seem to be having fun together, and Sandler is always at his best in a comedy when he looks like he’s actually happy to be there.

The shots Murder Mystery takes at unsophisticated Americans travelling abroad are kind of easy. Nick and Audrey can’t ever admit to being wrong. They think everything they’re experiencing is weird, novel, or exciting. When Nick gets fed up with the direction of things, he’ll just walk away, gruffly explaining “I’m tired as shit” or “I’m hungry as shit.” It’s not high art by any stretch, but Sandler and Aniston find a way to make it all somewhat amusing. By the low standards of Sandler’s cinematic output these days, Murder Mystery is assuredly better than it has any right to be.

Check out the trailer for Murder Mystery: