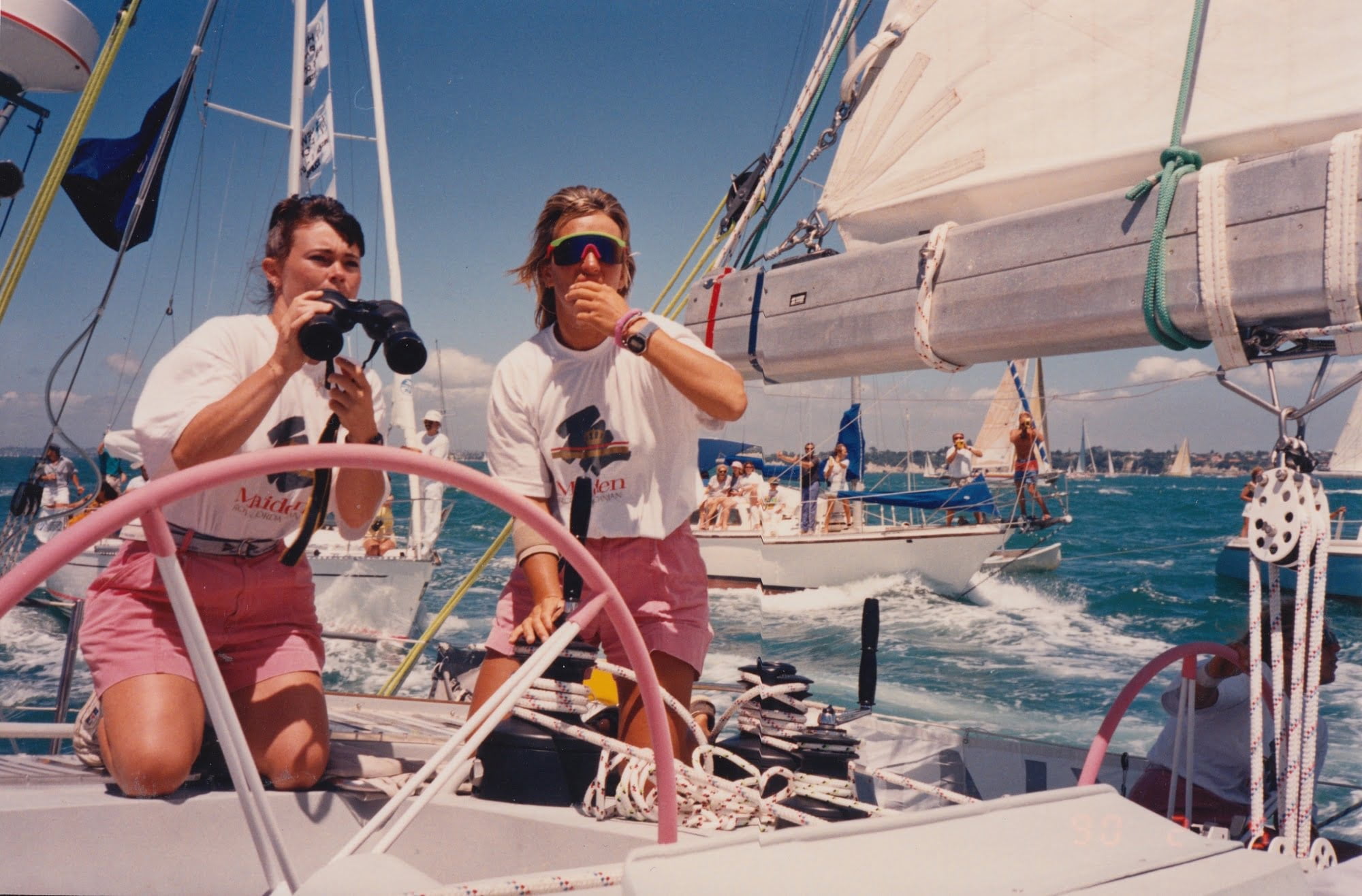 Maiden is an exceptional, effortless sort of documentary built around a story that’s so thrilling, dramatic, and inspirational that screenwriters who dabble in fictional films would’ve killed to come up with it themselves. Actually, it’s probably better that filmmaker Alex Holmes’ movie is a documentary. Fictional films built around the dangerous and detailed sport of yachting – even at their best – have traditionally performed poorly at the box office, and Maiden is a movie and story that should be seen by as many people as possible. While the sport in question defines who Holmes’ subjects are, their journey and competing in one of the most prestigious races in the world will immediately captivate anyone who gets caught up in the film’s orbit for even a split second.

British skipper Tracy Edwards had a dream: to become the first ever female captain of a competition yacht in an around the world race. Edwards’ mother was a rally driver, and her Hi-Fi engineer father was a member of his wife’s crew, so the desire to compete was instilled in her at an early age. After Tracy’s father died suddenly of a heart attack when she was only ten, life took a downward turn for the family. Mom was remarried to an alcoholic abuser, the family business went under, and by her own estimation, Tracy was suspended or kicked out of school 26 times in her angry teenage years. One of Tracy’s first adult jobs was working as a bartender and stewardess on various ships. It was where she first learned about the fabled Whitbread Round the World race (now known as the Volvo Ocean Race, which took over sponsorship from the British brewing company earlier this century): a 33,000 mile (give or take a few thousand clicks depending on winds, weather, and other natural obstacles), nine month long yachting competition that pulls in sailing’s best of the best from around the globe.

Edwards started her yachting career off modestly, begging skeptical crews to let her be a lowly chef just to get onboard a ship. (In her first year, Edwards was only one of four women out of 230 crew members across all boats in the race.) In 1989, at the age of 26 and after purchasing a raggedy secondhand ship in desperate need of repairs, Edwards and her all female crew made history by competing in the famous race, but analysts, commentators, and fellow yachtsman saw the voyage of the Maiden as a joke, taking bets on how long the ladies would last.

I wasn’t familiar in the slightest with either Edwards’ story or the race that made her famous before going into Maiden, but Holmes’ film got its hooks into me long before the action hits the water. Maiden has all of the elements of a classic underdog story that’s boosted by a sense of righteousness, timeliness, and the complex, often clashing personalities at the centre of it all. Homes follows a template of filmmaking close to that of an ESPN 30-for-30 documentary, blending recently conducted interviews with a treasure trove of archival footage (including some stunning imaged captured aboard the Maiden during their fateful race), but it escalates and moves like a sweeping dramatic blockbuster without needing to embellish any of the details. If the story’s core subjects weren’t on hand to tell viewers exactly how it was and that original footage didn’t exist, one would almost think that Maiden was the sort of inspirational fable that’s too good to be true. Thankfully, for all our sakes, the story is both truthful and resounding. 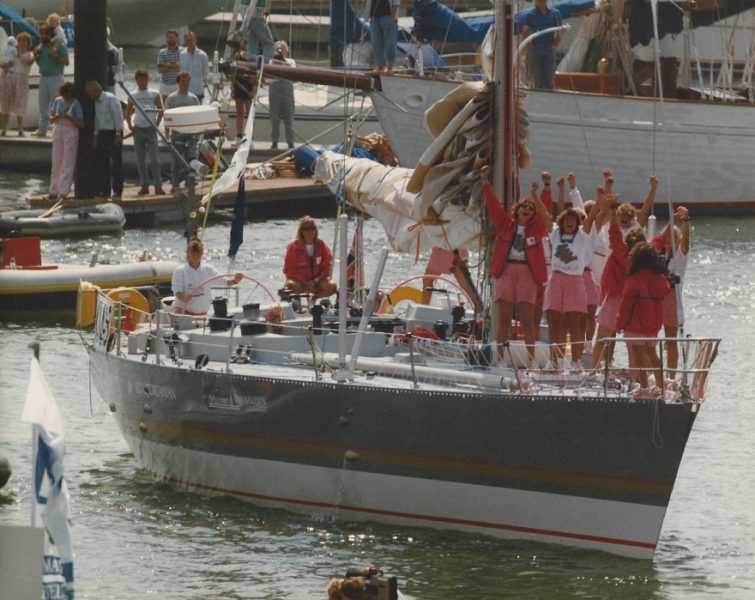 At the heart of Maiden and all of its developments is Edwards, who’s as fascinating today as she was back in 1989 and earlier. She wanted to captain an all female crew in a notoriously male driven sport, but she loathed being called a feminist, something that coloured how the press covered the Maiden’s journey during the race. She had the confidence to turn such a lofty dream into a reality, but the road to get there was paved with good intentions and an overwhelming number of potholes. The boat she purchased was in a sorry state. She worked with her teammates on fixing it up for over two years without bringing in a single dime. She needed to secure approximately one million pounds just to enter the race, maintain the ship and crew, and see things through to completion, but no one was willing to sponsor their efforts (except for one unlikely angel investor that Tracy made an impression on years earlier). Tracy had the drive, but little experience as a skipper, something that frequently drove some of her more seasoned teammates to the breaking point. By all accounts, including her own, Tracy wasn’t an easy person to be around, but a lot of that can be attributed to pressure, stress, and self-doubt.

The more the viewer learns about Tracy and her teammates, the richer and more involving Maiden becomes. Holmes keeps revealing new layers and wrinkles about the personalities involved (including some other skippers in the race and various journalists) to build audience investment to a crescendo. It’s easy to make a highly formulaic film about underestimated heroes trying to succeed against all odds, but Maiden is much more satisfying because each and every subject beyond Tracy is worth following and paying attention to. It’s not just a film about a single, complicated figurehead taking part in one of the most complicated and fraught athletic endeavours in the world, but a variety of complex, sometimes contradictory personalities working towards similar goals. When you place such human beings into such a gruelling pursuit – one that frequently involves sub-zero temperatures and waters that could kill in seconds, violent storms, and racing that continues throughout some very long nights – you have a recipe for a near perfect movie.

Do I care more about the niche sport of yachting after watching Maiden than I did before going into it? Not necessarily, but I assuredly care about Edwards, her teammates, the other rival crews, and the story Holmes wants to tell. It’s certainly the MOST I’ve ever cared about yacht racing, That’s inarguably more important. The best sports movies make people care deeply for things that lie beyond the boundaries of the field, and Maiden certainly belongs to that rarified class of film.

Maiden opens at Varsity Cinemas in Toronto on Friday, July 12, 2019. It opens in Montreal on July 19 and in Vancouver on July 26. Also, from July 28 to August 6, the newly refurbished Maiden yacht will be docked at the Coal Harbour Marina in Vancouver as part of a two year long world tour to raise funds and awareness for girls’ education and female empowerment. More details on that journey can be found here.

Check out the trailer for Maiden: