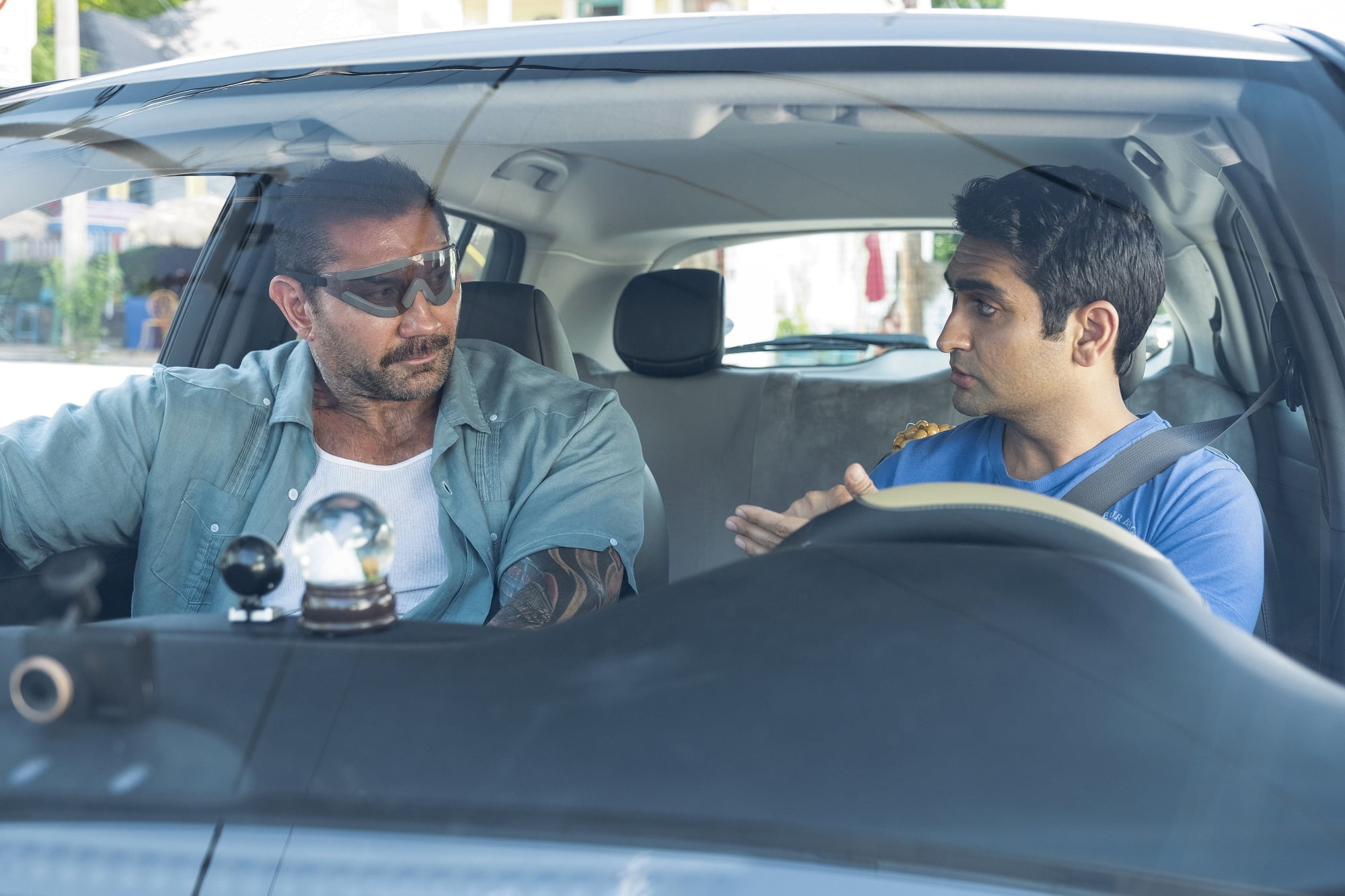 As formulaic, marginally satisfying, and predictable as a bowl of vanilla ice cream with no toppings, the action comedy Stuber manages to deliver some decent chuckles and an appropriate level of shocks when called upon, but it’s also a film that should be far better than it is given the level of talent involved. In front of the camera and behind it, Stuber has many of the ingredients to be something great, but the final results are both comfortable and forgettable. It’s fine, but admittedly disappointing. You’ll laugh a few times when the premise and cast are utilized to their full potential, but the lasting impact of Stuber will be next to nothing.

Workaholic Los Angeles detective Vic Manning (Dave Bautista) has spent the past two years of his career attempting to track down a ruthless drug kingpin (an underutilized Iko Uwais), and he’s about to see his boss (Mira Sorvino, also underutilized) hand his personal quest for justice over to the feds. But on the day Vic is scheduled to get Lasik surgery to fix his failing eyesight, he’s tipped off that a huge shipment of drugs is coming into the city later that night. Effectively unable to see or drive after his surgery, Vic calls for an Uber. His driver, Stu (Kumail Nanjiani), is Vic’s polar opposite. Stu works two jobs to make ends meet, both of them thankless and soul crushing, and he’s about to open up a chain of ladies only spin class fitness centres with the woman he has a possibly unrequited crush on (Betty Gilpin). Vic essentially bullies and forces Stu into helping him track down the bad guys, and over the course of their time together, they’ll become an unlikely team and teach each other valuable life lessons.

The most glaring problem with Stuber is obvious from the opening scene. The script from German screenwriter Tripper Clancy is patently forced and unusable. It’s the kind of story that has lightweight, high concept potential, but it’s also lifted wholesale from Luc Besson’s dire French language Taxi franchise (which itself had its own American remake with Queen Latifah and Jimmy Fallon and was also distributed by Stuber’s studio, 20th Century Fox). Even Besson’s version of the story was heavily indebted to the mismatched buddy pictures that came before it, so this further watering down of a concept that was never that sturdy to begin with needs some new life breathed into it. Clancy emphatically can’t do it, and the script is as sturdy as a wet cocktail napkin. Stuber is a film that seems to have been made with the belief that a talented cast and strong director could turn a script this lazy and malformed into something entertaining with a modest budget. If that’s what Stuber’s producers were thinking, they were almost right. 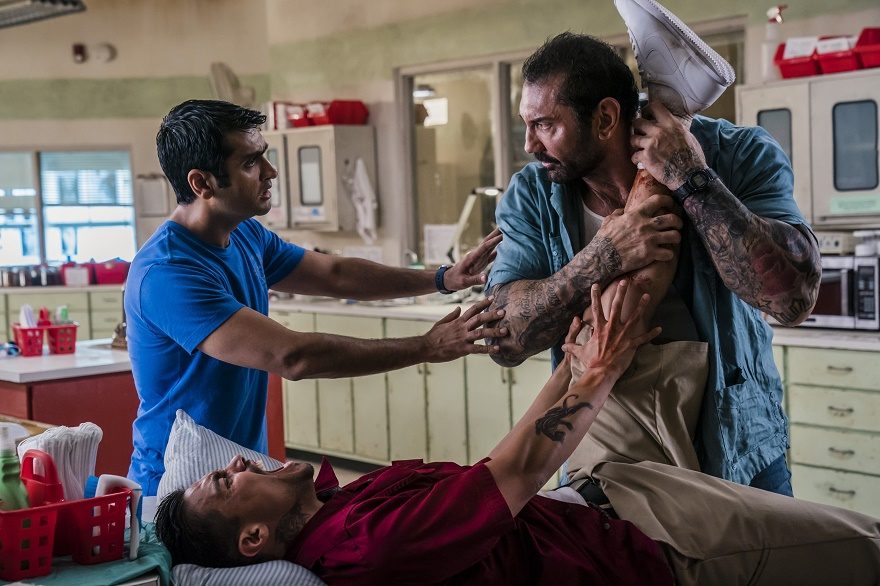 Stuber is directed by Canadian filmmaker Michael Dowse (Goon, Fubar, The F Word), who packs the film with plenty of subtle hoser jokes about Montreal bagel shops and Coffee Crisps, but still strikes as a curious choice for an action flick. From the film’s opening fight between Bautista and Uwais (which does make great use of a dining cart, if nothing else), it’s clear that Dowse is more suited to comedy than action. A lot of the action beats in Stuber are passable and unexceptional, but Canadian cinematographer Bobby Shore’s decision to capture it all in a frantic, handheld style doesn’t make things look any better. Whenever Dowse is given the space to frame more comedic set pieces – like an extended sequence where Stu and Vic have to go backstage at a strip club or a hilariously slapstick knock-down-drag-out brawl in a sporting goods store – Stuber shows enough of a pulse to sustain audience good will.

I’m willing to bet that at a certain point, Dowse and his performers made an agreement to follow the story beats of the script, but make up their own dialogue as they went along. The witty jabs lobbed back and forth by Vic and Stu are hit or miss (but slightly more of the former), but at least their antagonizing of each other distracts from the overall direness of the story. Stuber is the kind of story built around a thin concept that keeps the heroes from simply going from Point A to Point B in their quest. Most of the film’s running time is padded out with side quests to keep things moving towards a respectable feature length. Stu’s crush just broke up with her NBA player boyfriend, and she wants him to come over immediately so they can hook up. Vic’s increasingly estranged  sculptor daughter (Natalie Morales, who shines in a part where she has almost nothing to do) is having her first gallery show that very evening, and daddy promised that he’d make an appearance. There’s an obvious twist involving the villains, and Stu and Vic will have numerous conversations about how they handle their anger issues in equally unhealthy ways; taking jabs at each other’s vision of masculinity that are neither offensive, nor particularly interesting or original. The perfunctory, almost careless plot of Stuber results in a film that feels longer than its 93 minute running time would suggest. The viewer just waits for the next inevitable sequence to come along and do its thing before moving on to the next scene. The viewer can literally write along with the script to Stuber as it’s happening. When one scene begins, the one to follow can be easily predicted.

Thankfully, Stuber is saved from ever being boring thanks to Nanjiani and Bautista, two credible and likable screen presences that play well off each other. Each gives as well as they can take, even though both actors could probably play these roles in their sleep. They clearly energize each other and are comfortable with pretty much anything the other can dish out. Najniani and Bautista elevate the movie around them so immeasurably that in their best moments they can make viewers forget that Stuber isn’t very good. Both Nanjiani and Bautista’s stars are on the rise, and while Stuber might be a step backwards for the both of them, it’s also proof that they can do pretty much anything they set their minds to. They earn a healthy four star review. The rest of Stuber is one-and-a-half to two stars at best. It’s an improvement over watching both of these actors reading the phone book while constantly insulting each other but not as good as Stuber could’ve been if the same parties involved were given a useable script.

Check out the trailer for Stuber: