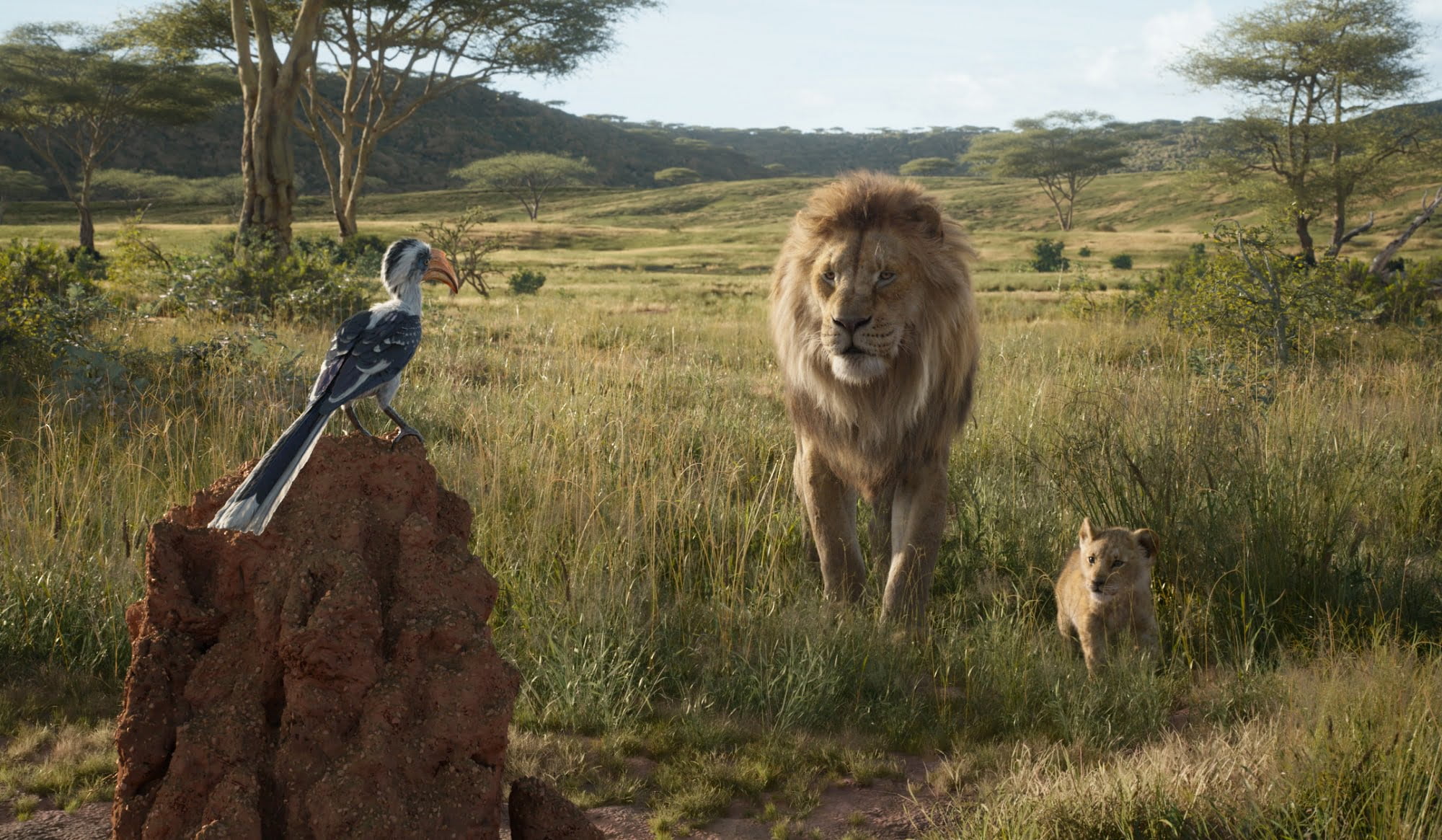 Director Jon Favreau’s “live action” remake of Disney’s dearly beloved animated classic The Lion King is both a hard and easy film to review, but a good one nonetheless. Analyzing the actual storytelling content of The Lion King is virtually impossible because it’s pretty much a word for word, scene for scene retelling of its predecessor with no distinguishable or noteworthy deviations. Admittedly, it’s a little troubling that a major studio would sink this much time, money, resources, and talent into something that’s a bit too close to Gus Van Sant’s unusually flat, unnecessary, beat for beat remake of Alfred Hitchcock’s Psycho, but the core of The Lion King remains as strong as it ever was, functioning just fine as something that will appeal to viewers (mostly young ones) who’ll be experiencing this tale for the first time.

I’m sure many critics will point to The Lion King 2K19 as yet another huge stumble towards further homogenized blockbuster mediocrity, and while I can’t argue against such points, I can say that there’s plenty to admire in Favreau’s film in terms of its astounding technical acumen. At the very least, it’s leagues better than Guy Ritchie’s Aladdin remake from earlier this year. That movie made (and is, indeed, still making) a mint, regardless of what critics said, and The Lion King won’t be any different. The only way to stop people from seeing these remakes and reboots is for them to genuinely get sick of them and start refusing nostalgia or taking their kids to movies outright.

Is there any point in going over the plot of The Lion King this time around if nothing has changed? I usually talk about a film’s plot even when it pertains to remakes that hew closely to the original, but it has never felt more unnecessary than it does right now. The script from Jeff Nathanson (Speed 2: Cruise Control, Catch Me If You Can, Rush Hour 2) offers only a handful of tweaks and some extra padding that don’t enhance or detract in the slightest. Favreau’s movie is still about a young lion named Simba (voiced as a cub by JD McCrary and as an adult by Donald Glover) who has been pegged to rule over the Pride Lands by his wise, old father (once again voiced by James Earl Jones, the only cast member to appear in both versions of this story), much to the chagrin of his jealous uncle, Scar (Chiwetel Ejiofor). Scar makes a play for the throne, kills Simba’s dad, and exiles the young cub from the kingdom. Simba learns empathy, maturity, and the ability to forgive himself with the help of a warthog (Seth Rogen) and a meerkat (Billy Eichner), before returning home to reclaim his birthright. It feels ridiculous having to write out the plot of one of the highest grossing films of all time, but there it is again, in case it’s been a while since you’ve seen it.

To say that The Lion King is predictable would be an understatement, especially to anyone who has seen the original more than once since 1994. Everything happens in the exact same order, and every scene has the exact same outcome. I can’t tell if that’s a spoiler or not, but Favreau’s film is essentially unspoilable. The songs are sung by different people, but are basically identical, save for a few extra lines and verses here and there and one new track from Beyoncé (who voices the adult version of Simba’s best friend and future wife, Nala) that plays over a montage. The set pieces that were most memorable in the original – the trip to the elephant graveyard, the stampede in the gorge, the iconic, operatic opening – are all carried over here. It’s faithful almost to a fault and there’s no storytelling ambition to be found here, but it’s hard to fault Favreau and Nathanson for sticking to the “if it ain’t broke, don’t fix it” school of mounting a remake, especially of a film so fondly remembered as The Lion King. 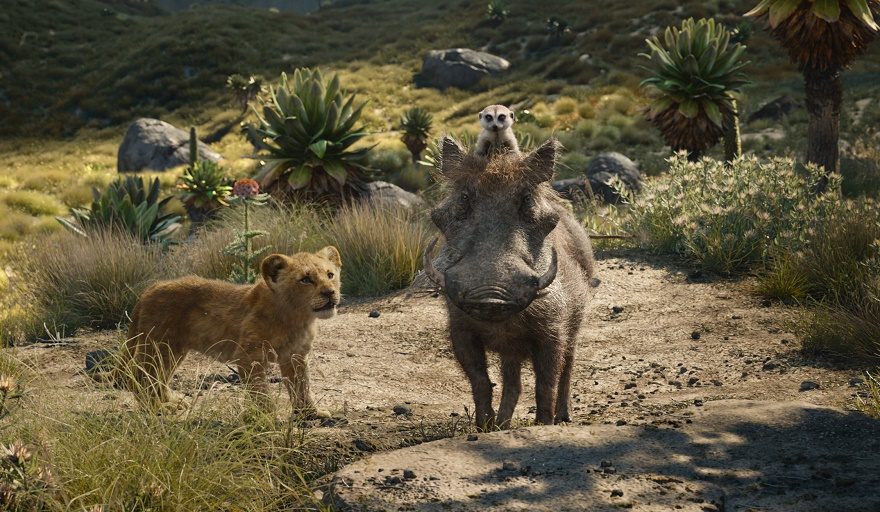 The cast similarly doesn’t stray very far from the tone of the material. Glover, McCrary, Beyoncé, and Jones don’t bring anything new or original to the table. Ejiofor initially paints Scar out to be a more terrifying sort of soft spoken psychopath, but the richer with power the character becomes, the more he sounds like Jeremy Irons did in the animated film. It is nice that all of the primary characters are voiced by black actors, but in the grand scheme of things, these parts could be played by almost anyone who saw the original. Eichner and Rogen slide into the roles of Timon and Pumbaa nicely, with the actors getting a chance to inject some new punchlines into the comedic duo’s roles. Rogen fares a bit better and seems to be trying something a bit different, but there are times when Eichner sounds too much like he’s trying to do a Nathan Lane impersonation. Really the only actor who’s given a chance to spread their wings here (pun intended) is John Oliver as Mufasa’s avian advisor Zazu, and mostly that’s because the actor and talk show host plays the character as if he’s just playing the heightened version of John Oliver people see on television every week.

When it comes to these kinds of movies, they have to be critiqued based on whether or not they either improve upon the original or damage the predecessor’s reputation by existing in the first place. This version of The Lion King does neither. I can see people who loved the original getting a huge blast of nostalgic feelings from this in a manner similar to what The Lion King stage show has been providing for the past couple of decades. I can also see fans of the original scoffing at Favreau’s take and questioning why one would even bother with this when the animated version still exists. I’m sure it’s a similar quandary that people who went to see Disney’s live action versions of Beauty and the Beast and Aladdin wrestled with, but all I can say in praise of The Lion King’s existence is that it’s heart and mind are more firmly in the right place than the films it will undoubtedly get lumped in amongst.

The difference between other Disney live action remakes and Favreau’s film is that The Lion King has cares deeply for the material, and the filmmaker wants to give viewers a version of the story that they literally haven’t “seen” before. The technical acumen of The Lion King is visually astounding, leaping beyond Favreau’s previous dabbling in forward thinking digital mediums with The Jungle Book. Unlike the animated version, the characters (except for their mouths when they’re talking) move, saunter, and interact like actual animals and not caricatures. The cameras (both real and virtual) can move a lot faster through Favreau’s landscapes – which blend real jungles and deserts with CGI ones – meaning the action beats and large scale set pieces look and feel grander than ever before. Every patch of fur, protracted claw, blade of grass, or insignificant looking bug has been carefully crafted by the filmmakers and effects people with loving attention to detail. To think about the amount of work hours and how many new forms of technology had to be invented for even some of the most seemingly insignificant background details is frankly mind-blowing. Unlike other recent Disney remakes it’s hard to imagine anyone taking on something with as massive of a scope and difficulty level as bringing The Lion King to life if they didn’t truly adore and believe in the project from the very beginning. Call the blatantly rehashed storytelling cynical if you must, but it’s clear that a lot of people worked very hard on this because they love what The Lion King represents.

This new version of The Lion King feels like picking up a reprint of a beloved storybook from one’s youth and marvelling at the new illustrations inside. In the best moments of Favreau’s film, I was reminded of how dazzled I was seeing the 1994 original in theatres for the first time when I was fourteen and immediately being impressed. The story impressed me more back then, but it’s still a great story. (Then again, deciding to rework Hamlet is a pretty great starting point for any story.) I’m just as captivated by these images in their photorealistic forms as I was when they were lovingly sketched out by hand. I’m sure younger viewers will be just as impressed, and that’s ultimately the biggest goal here. Maybe The Lion King doesn’t totally justify its existence on a cultural level, but then again, neither did the stage play. If you weren’t up in arms about the Broadway musical version, there’s no reason to get bent out of shape over this.

The Lion King opens in theatres everywhere on Thursday, July 18, 2019.

Check out the trailer for The Lion King: