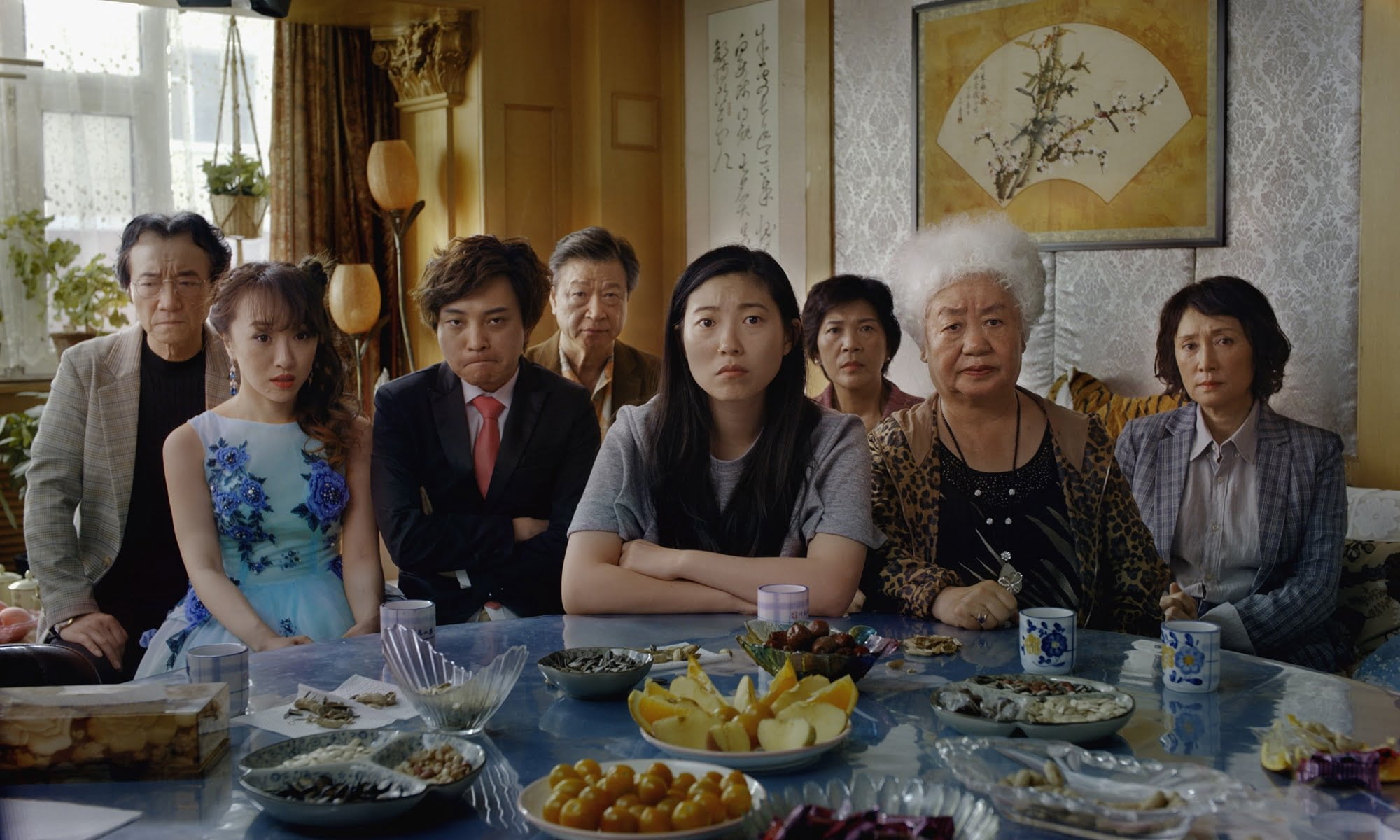 Writer-director Lulu Wang’s autobiographical family drama The Farewell is the rare kind of overwhelmingly honest, carefully observed, and unabashedly emotional filmmaking that words simply can’t do justice because the feelings being expressed throughout are impossible to define with any degree of precision. Although this “based on a true lie” story of a family coming together to preemptively mourn the loss of a loved one is told from a resolutely Asian-American perspective, The Farewell has a power, grace, and perceptiveness that reaches beyond its own unique cultural specificity. Although Wang’s story is based around a deception that’s either dubious or well meaning depending on how one chooses to look at it, The Farewell will strike a familiar chord with anyone who has watched their family or friends struggle with complex emotions and ethics while waiting for someone close to them to inevitably pass away. Although the film’s refreshingly uncompromised Chinese perspective adds a lot of natural drama and sadness to The Farewell, Wang’s unvarnished and unadorned approach to her material will be deeply felt by anyone who chooses to attend. It’s a truly special and unforgettable film and one of the best family dramas in years.

Billi (Awkwafina) is a struggling writer in New York City who has a close relationship to her grandmother (Shuzhen Zhao), who still lives in her hometown of Changchun back in China. Billi and Nai Nai talk on the phone all the time, but both are left in the dark about something that is deeply troubling the other members of their extended family. Billi’s mother and Nai Nai’s son, Haiyan (Tzi Ma), and his wife, Jian (Diana Lin), are planning to travel back to China for the first full on family reunion in twenty-five years. The cover story is that Billi’s younger cousin from Korea, Hao Hao (Han Chen), is getting married, but the real reason for the trip is because Nai Nai has been diagnosed with Stage 4 lung cancer and has been given four months to live, at best. Nai Nai doesn’t know that she’s dying. Her sister (Lu Hong) told the rest of the family. In Chinese culture, it’s believed that the fear of dying is deadlier than any disease, so the family members all agree to keep things quiet. Haiyan and Jian don’t want Billi attending the “wedding,” not just because she’s deeply in debt and shouldn’t be spending the money to travel, but because the entire family fears that she won’t be able to keep her emotions in check and perpetuate their shared deception. Billi defies her parents’ wishes and goes to Changchun anyway. She does her best to keep her true feelings hidden from Nai Nai and grows to realize that all of her relatives are struggling in similar ways, despite holding varying cultural and ethical beliefs.

Wang based The Farewell on her own experiences with her grandmother and it shows. The Farewell is packed to bursting with the sort of blunt, frequently uncomfortable humour and drama that can’t be faked. It’s the sort of delicate, soulful, detail oriented material that has to be experienced before it can be written, directed, or performed. Through each of her characters – not just her on screen surrogate, Billi – Wang wrestles with all of the conflicting points of view equally; weighing them and presenting them as neither comforting nor evil. While this depiction of Chinese culture might seem foreign or possibly even hurtful to western audiences, Wang breeds a sense of understanding, primarily because no one involved in such a delicate situation will ever know how to properly handle it. As much as human beings have tried to steel themselves for impending death, no one has ever been able to create a guidebook about how such matters could be handled with the least amount of pain and suffering for all parties involved. Each of Billi’s family members is willing to go along with the plan, but none of them feel the same way. At some point, each of their facades will slip, and their mounting grief will be exposed, either by way of humour, anger, sadness, or carefully reasoned and logical responses.

The Farewell revolves around a surprisingly large scale deception, but Wang has built the majority of her film around lengthy give-and-take discussions rather than elaborate set pieces or dramatic contrivances. There are many tense dinner table conversations where family members inelegantly tap dance around speaking their mind, not only with regard to Nai Nai’s condition, but any number of other long brewing disagreements and issues. Nai Nai’s sons both left Changchun for their own reasons and careers, and their reuniting under a common cause still allows for plenty of friction, especially with their wives. They can all joke about things, but those moments are fleeting, observational, and often noticeably sarcastic, a comedic setting usually reserved for people like these who don’t want to say what they truly mean in an effort to save face.

There’s also little space for Billi or any of her relatives to express their grief either in private or in a one-on-one setting. While it’s comforting on some level to know that one isn’t going through such a fraught process as saying goodbye on their own, Wang shows how that sense of togetherness and a united familial front can be stifling. If Billi wants to talk to her father or Nai Nai away from everyone else, it’s impossible. In one of the film’s best storytelling and visual decisions, Wang stages most of her scenes with three or more family members within the same shot, suggesting that these characters couldn’t be left alone, even if that’s what they truly want. The Farewell not only understands the conflicting emotions that surround a culturally acceptable lie, but also the clashes that arise thanks to the undefinable, unpredictable nature of the grieving process. Billi’s family might be throwing together a hastily assembled wedding ceremony, but really what they’re creating is a living wake. Slowly through their time together, each of the family members starts to realize that, and by the end, most of them are of the same mindset that Billi had from the start, suggesting that for all their adherence to varying cultural traditions and values, they aren’t so different after all. They just have different ways of expressing it.

The Farewell has both an easily identifiable emotional core and a firmly established cultural identity, with the latter working brilliantly to bring the former to the surface. The Farewell isn’t a flashy movie in terms of production design or style. The family is upper middle class; neither flush with money, nor impoverished. They live in functional, inornate spaces and set their wedding in the same kind of unexceptional looking banquet halls one can find in any major city in the world. They are a resolutely average Chinese family who live somewhat predictable lives outside of their current situations. It feels like a case of a writer and director telling a story they can immediately identify with, but The Farewell wouldn’t have the same intelligence and emotionally gripping power if it had taken place anywhere else in the world or in a different social strata. If it isn’t organic or realistic, Wang rightfully doesn’t pay it any mind. There are constant clashes happening between Billi and her parents’ Americanized views, her uncle (Jiang Yongbo) and his Korean influenced family, and those who decided to stay behind in Changchun, but these opposing viewpoints come together and play out in neutral territory. The Farewell doesn’t need style or show-stopping speeches at well placed intervals to succeed. It just needs to exist and allow the viewer to figure things out at the same pace as its characters. Wang’s work values the audience’s intelligence and emotional responses more than any other film this year. It’s a film designed to comfort and confront in equal measure, gently holding the hand of the viewer along the way without ever pandering to them or telling them how to feel. If they want to cry or express anger, that’s fine. If they want to talk things out, great. If they want to sit there quietly, it’s not an issue.

Wang also has an exceptional cast at her disposal. Although she has had a major break-out over the past couple of years, The Farewell proves that Awkwafina can do pretty much anything. While she shows some flashes of the wit and swagger that has made her such a charismatic and endearing presence, Awkwafina scales her performance back as far as it can go without disappearing. It’s a strong choice when one considers that the character often feels like a background player in her own story, and she performs Billi almost as if a Greek chorus has been placed inexplicably in the lead role of a production. She’s brilliant, and has outstanding scene partners in Ma, Lin, Yongbo, and Zhao (who shockingly has never been in a film before, but feels like a naturally seasoned veteran). Although Awkwafina is playing a gentler take on the traditional “black sheep” role, she still feels like a product of the same family and culture. The chemistry between the actors is effortless; a testament to their collective talents and the strength of Wang’s material and direction.

There are plenty of details throughout The Farewell that will be immediately identifiable to people from any cultural background. Shitty hotel rooms and drunken wedding speeches are pretty much the same no matter where you go in the world. Similarly, while Wang’s film has deeply dug in Chinese roots, every emotion at the heart of The Farewell is immediately identifiable, even if the location and social customs are different. One might question why these characters do things in certain ways, but Wang elegantly shows how these decisions are understandable even if the viewer disagrees with them. Cultures vary, but the human condition, fear of death, and the complex nature of grieving are the same around the world. The Farewell is the kind of perfectly observed drama that will burrow its way into the minds of viewers and take up residency, offering space for contemplation, reflection, and remembrance long after the credits roll. It’s the kind of work with the power to make people reevaluate how they’ve experienced death in their own lives and empathize with those who process it differently. In Wang’s view of these issues of family and mortality, all emotions are equal because they’re unique to the people experiencing them. It’s powerful, comforting, and complicated in equal measure; a best case outcome arising from an unbearably tough real life situation.

Check out the trailer for The Farewell: