Review: Once Upon a Time… in Hollywood 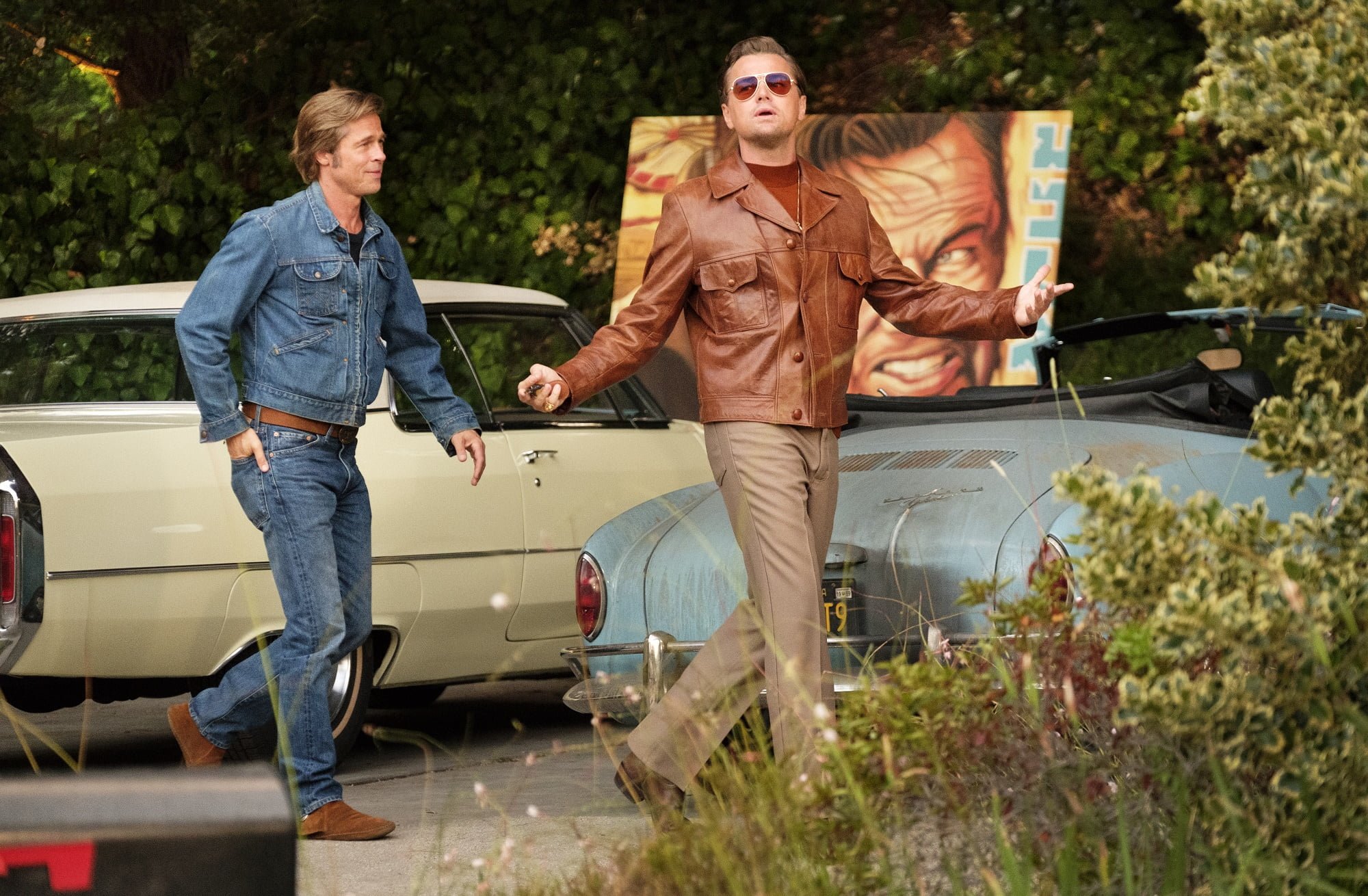 Once Upon a Time… in Hollywood, the ninth (and possibly second to last) film from writer-director Quentin Tarantino is precisely the kind of love letter to old school cinema, television, music, and aesthetics that one would expect from a brainy movie brat with an eye for exceptional visuals and fine details and an ear for snappy dialogue. That’s a good thing, because without Tarantino’s more playful and newly self-critical touches, Once Upon a Time… in Hollywood could’ve been an insufferable bit of revisionist history. Instead, it’s a chance for Tarantino to have his cake, eat it, too, and still find a way to make it connect with an audience. On one hand, it’s as simple and stripped down as his debut feature, Reservoir Dogs, and on the other it’s a bit of wish fulfillment masquerading as social commentary in the vein of Inglourious Basterds. It’s another movie where Tarantino is gifted an enormous sandbox to play in, and yet again he has found a way to make his own indulgences, predilections, and fetishes into a thoroughly compelling package that viewers will remember for years to come.

Once Upon a Time… in Hollywood opens in February of 1969 and starts off following the work and adventures of aging action star Rick Dalton (Leonardo DiCaprio) and his best buddy and stuntman Cliff Booth (Brad Pitt). Rick isn’t getting any younger, and he’s faced with two choices after his successful television western has reached the end of its run: continue taking supporting “villain of the week” guest spots on various shows so the networks can put over their new stars, or heed the advice of an enthusiastic agent (Al Pacino) who thinks the actor should try his hand at some Eurotrash flicks that are shooting in Italy. Rick’s an alcoholic mess and a mediocre talent on the best of days, but at least he has Cliff’s shoulder to cry on. Cliff, who’s harbouring a dark secret that has led to everyone but Rick abandoning him, hasn’t been doing much stunt work, and mostly serves as his boss’ driver, housekeeper, and gopher. Rick and Cliff frequently hang out at the actor’s house in the Hollywood hills, where he lives next door to his new neighbours, film director Roman Polanski (Rafa? Zawierucha) and his wife, actress and rising star, Sharon Tate (Margot Robbie).

From the time period and curious blending of real life characters and fictional ones, Once Upon a Time… in Hollywood will eventually deal with the end of hippie culture in the 1960s and the Manson Family murders, but like most of his previous efforts, Tarantino isn’t in any hurry to get there, preferring to revel not in the nastiness and complexity of the situation, but rather everything that the filmmaker found endearing about the era in question. Instead of launching head long into a character or group’s search for answers or desire to achieve a goal, Once Upon a Time… in Hollywood starts off as a unique and vibrant sort of hang out movie, despite the fact that few people would love Rick or Cliff outside of each other. After establishing the camaraderie shared between Cliff and Rick and giving viewers a pop cultural lay of the land at the time, Tarantino splits things up and gives each of the primary characters something different to do. Rick goes off to have a major epiphany about his profession while shooting yet another Western pilot. Cliff stays back to fix Rick’s TV antenna – which prompts him to reflect on some of his life’s biggest mistakes – and eventually cruises around in the boss’ car to pick up a hitchhiking hippie chick (Margaret Qualley). While all this is going on, Sharon (who’s the only undoubtedly lovable character in the film) decides to have a day out on the town and pop into one of her movies that’s showing at the local cinema.

None of these travels and the various side stories, movies-within-movies, and lengthy, fully fleshed out anecdotes that crop up along the way amount to much of a story, but they speak volumes about who these people are and the circles they travel in and around. Tarantino might have a lot of input when it comes to the dialogue and overall appearance of Once Upon a Time… in Hollywood, but there’s also plenty of room for DiCaprio, Pitt, and Robbie to give each of their separate-but-equal threads its own unique personality. While there’s boatloads of neon lights, marquees, classic cars, and outstanding production design (almost all of it practically staged), each of the characters see Hollywood in a different way, and each actor is allowed to express themselves uniquely.

Pitt plays Cliff as a laid back dude who sees everything he does for his best friend as an easy way to make a living. He has plenty of things that he should be stressed out about (and there are just as many reasons to think he’s probably a shithead or even something worse), but he’s also strangely kind to a fault. Cliff’s vision of Hollywood is of a fun and wild place where anything can happen and one just needs to roll with the punches to survive. He also, somewhat paradoxically, has an even bigger ego than his employer, which is a fun subversion of the traditional employer-employee dynamic, but also something that’s very true to life if you’ve ever had to get in touch with a major celebrity for any reason at all. It’s usually the people behind the star who are more guarded, hard-edged, and drunk with power than the stars themselves

DiCaprio – who has given some great performances over his career, but possibly none as layered and dramatically and comedically fascinating as this – has a field day playing around with all of Rick Dalton’s innumerable insecurities. DiCaprio’s savvy depiction of Rick is of a man who can’t decide if he wants to make art, make money, or simply give up. Rick stammers and stumbles over his words and lashes out at himself whenever he thinks he has screwed up. He’s a broken man, but through DiCaprio’s portrayal, one can almost see someone who has perpetually been told by agents, casting directors, filmmakers, and his peers that he’ll never measure up to expectations. All of the best scenes in Once Upon a Time… in Hollywood focus on Rick trying to overcome his insecurities and become happier with his career and social standing. 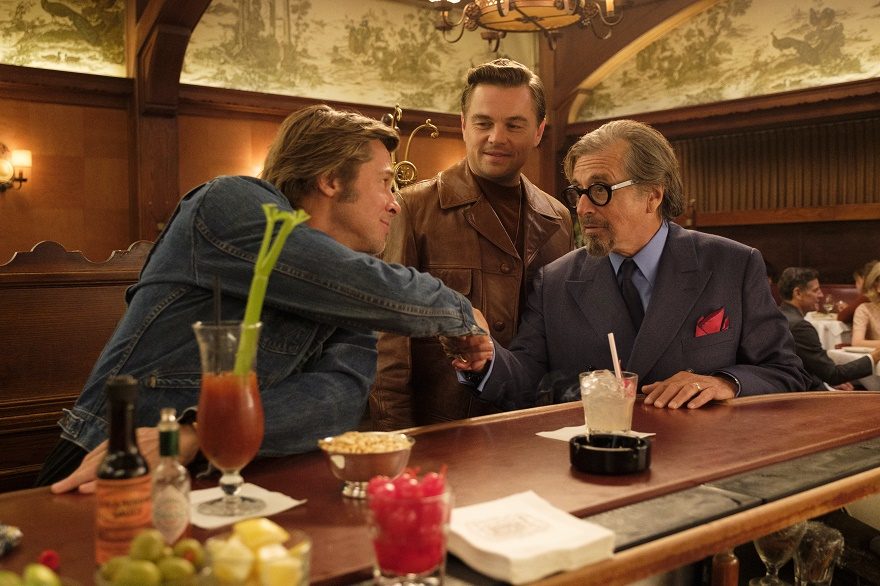 Robbie, for her part, exudes kindness and grace without a hint of ego. Sharon Tate’s vision of Hollywood (or at least the one depicted by Tarantino) is of a magical place where dreams come true. Although she’s romantically linked to someone who was once the hottest filmmaker in the world, Tate has a humility to her here that one expects to play into the larger tragedy the audience thinks is just around the corner. To Robbie’s credit, she handles such a delicate depiction of the late actress with nuance and warmth. Unlike Cliff and Rick, who it’s debatable if you’d even want to have a beer with them, Sharon comes across as someone that a viewer could see as a potential friend.

But the mere mention that the story takes place in 1969 and that Sharon Tate and Roman Polanski are characters in an otherwise fictional movie will understandably give some pause before going into Once Upon a Time… in Hollywood. I doubt that once Tarantino gets around to expressly addressing the Manson Family in his film that any naysayers’ minds will necessarily be changed. They might be surprised to see just where heads, but Tarantino’s ultimate endgame opens up an even bigger list of moral quandaries than if it had gone down a different road and become a more run of the mill exploitation picture. There is an admittedly uneasy undercurrent about how flawed, somewhat despicable men can change their stripes that’s equally hopeful, hokey, and sexist, but it’s also vastly preferable to the alternatives that could’ve been. The finale of Once Upon a Time… in Hollywood will leave viewers divided, but the entire film before it is so strong and clearly visualized that any number of post viewing conversations feel like they would actually be worth the effort.

That sense of thoughtfulness – even if it is Tarantino’s own seemingly contradictory opinions about his characters and the era they lived in – helps to elevate the overall kid-in-a-candy-shop vibe of Once Upon a Time… in Hollywood. With his latest, Tarantino visually pokes fun at the traditional “love letter” to Tinseltown. Sure, Tarantino lovingly dotes upon mansions, winding roads, elaborate sets with painted backdrops, and sun kissed bodies, but the writer-director also never shies away from depicting Los Angeles as a place packed to bursting with self-centred assholes.

Through an array of filmmaking tricks from heavily detailed wide shots, uniquely canted angles, and elaborate movements, Tarantino makes Hollywood look appropriately surreal and even kind of foolish. There’s a constant obsession with pop culture that provides the film with an almost satirical backbeat. If a pop song isn’t playing, there’s a commercial on the radio or something on the boob tube to equally distract. If there’s nothing to hear or interact with on a visual level, there are period appropriate advertisements and signs to mess with the scenery. Tarantino makes Hollywood look like a small town where capitalism has been allowed to run rampant and infect everything it touches. There’s even a neat thing that Tarantino is doing throughout where he rhymes certain scenes to contrast with others, most memorably by comparing Rick’s drab, almost colourless pity-pool-party for one to a vibrant rager at the Playboy Mansion. He even finds a way to take his foot fetish – one of his most annoying, obvious, and off-putting trademarks – and make it into something weirdly compelling and relevant to the story.

That marrying of personal passions with a sense of overall relevancy and creating a sustainable balance between the two is ultimately what makes Once Upon a Time… in Hollywood so successful. It’s still overlong and indulgent, but perhaps more than some of Tarantino’s other recent efforts there’s something heartfelt to it all beyond his omnipresent love of genre cinema. Once Upon a Time… in Hollywood is a movie about yesteryear, but also a work that couldn’t have been made by a filmmaker who wasn’t wrestling with a lot of questions about their own career. Tarantino simultaneously sees himself as Rick Dalton, Cliff Booth, and Sharon Tate. It might be the first time the filmmaker has actually placed himself into the shoes of his characters, and it’s a nice fit and change of pace. The overall meaning of Once Upon a Time… in Hollywood is sure to be hotly debated, but it can’t be understated how much it clearly means to the person who made it.

Once Upon a Time… in Hollywood opens in theatres everywhere on Friday, July 26, 2019.

Check out the trailer for Once Upon a Time… in Hollywood: