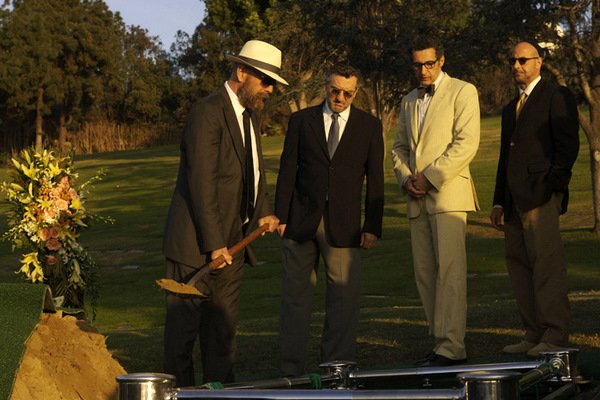 A scene from What Just Happened

This is a quiet week for new releases, but three new films are out in stores today, which may be just enough to keep you entertained for the next few days. On DVD this week, and for anyone with Hollywood dreams, there’s the comedic drama What Just Happened. On a much lighter, sillier note I take a look at the teen comedy Sex Drive. And also out this week, the fourth Futurama movie, Into the Wild Green Yonder.

What Just Happened
Hollywood is a dangerous place. Look through IMDb and you’ll see hundreds of powerful people who have made it big, only to find themselves in the gutter a few years later. With that tradition in mind, What Just Happened is a navel-gazing examination of what often happens inside the industry’s magic factory.

Academy Award winning director Barry Levinson’s latest film, which is based on the book by producer Art Linson, takes a darkly comedic look behind the scenes as a big shot producer tries to get his latest film on course for its debut in Cannes.

Robert De Niro stars as Art Linson, a man torn in ten directions by obligations to his families, friends, the studio and a drug-addicted director trying to make his art. After a disastrous test screening shows the need for edits, Art has to balance between pleasing the level-headed studio boss, Lou (played by Catherine Keener), and keeping Jeremy (Michael Wincott), the director, from going off the deep end. If he plays his cards right, the payoff is a big debut at Cannes, but there’s a long road ahead of him.

With it’s star-studded cast, including Sean Penn and Bruce Wilis playing themselves, What Just Happened is a brilliant look at the egos in Hollywood, and the drive to make any movie magic spill over into box office success.

Levinson gets some great performances from his cast, although perhaps none more than De Niro, Keener, and Wincott. But even with those performances, and some clever moments, What Just Happened is a very tough sell since the film walks-the-walk and talks-the-talk of a true-blood Hollywood insider.

It is rewarding at every turn though, and funny, but it requires an audience that loves the Hollywood machine, or at least the psyche that keeps it running.

Perhaps aptly enough, much like the film within the film, What Just Happened was a hard sell when it came out theatrically last fall. On DVD though, perhaps it can find an audience willing to laugh along with the in-jokes, and take the film for what it is: more about that place called Hollywood that we all love to dream about, and love to hate.

Sex Drive
Honesty is the best policy, so I have to admit it; when Sex Drive first came out in theatres I thought it looked like a threadbare retread of every teen comedy ever made. Funny enough though, Sex Drive makes no qualms about the films that inspired it, but the movie is such a fun ride, you can’t help but laugh and enjoy it, raunchy jokes and all.

Starting out in a teen bedroom, like we’ve seen so many times before, Josh Zuckerman is Ian, a recent high school grad who, wait for it, doesn’t want to go off to university as a virgin.

With dreams of chasing down a beautiful babe that he’s met on the Internet, Ian steals his brother’s car (James Marsden plays the brother, Rex) and takes his friends Lance (Clark Duke), and Felicia (Amanda Crew) on a road trip.

Things do not go to plan (or what would be the point?), and the trio find themselves fighting with rednecks, partying with the Amish, and trying to get Ian on his date with destiny. But their trip does gets a little more complicated as Felicia deals with a new crush, and Ian, her best friend, tries to bury his feelings for her.

Sex Drive aims to be an average comedy, and miraculously hits the mark because it tries to have some fun with all of the gags that have gotten so stale over the years. The cast, especially Seth Green as the Amish farmer and Marsden as the insane brother, also have fun with every silly moment.

An unrated edition of the film also comes out today, but really, as the introduction suggests, it’s meant to add-on to the film after you’ve already seen it. Taking several silly liberties with the footage, the unrated edition inserts naked women, and a couple of men, into the film, in addition to some quick bloopers and randomly changed lines. It’s not as funny as it could have been, but a few of the extra scenes are worth a look, if you enjoyed the silly comedy the first time around.

Futurama: Into the Wild Green Yonder
Also out this week, the fourth and perhaps final film in the Futurama series. This time out, when a freak accident gives Fry the ability to read minds, he may be the only person in the universe who can stop the impending destruction of a gateway known as the “Green Age.” Expect lots of environmental jokes in this comic romp from creator Matt Groening, and director Peter Avanzino.