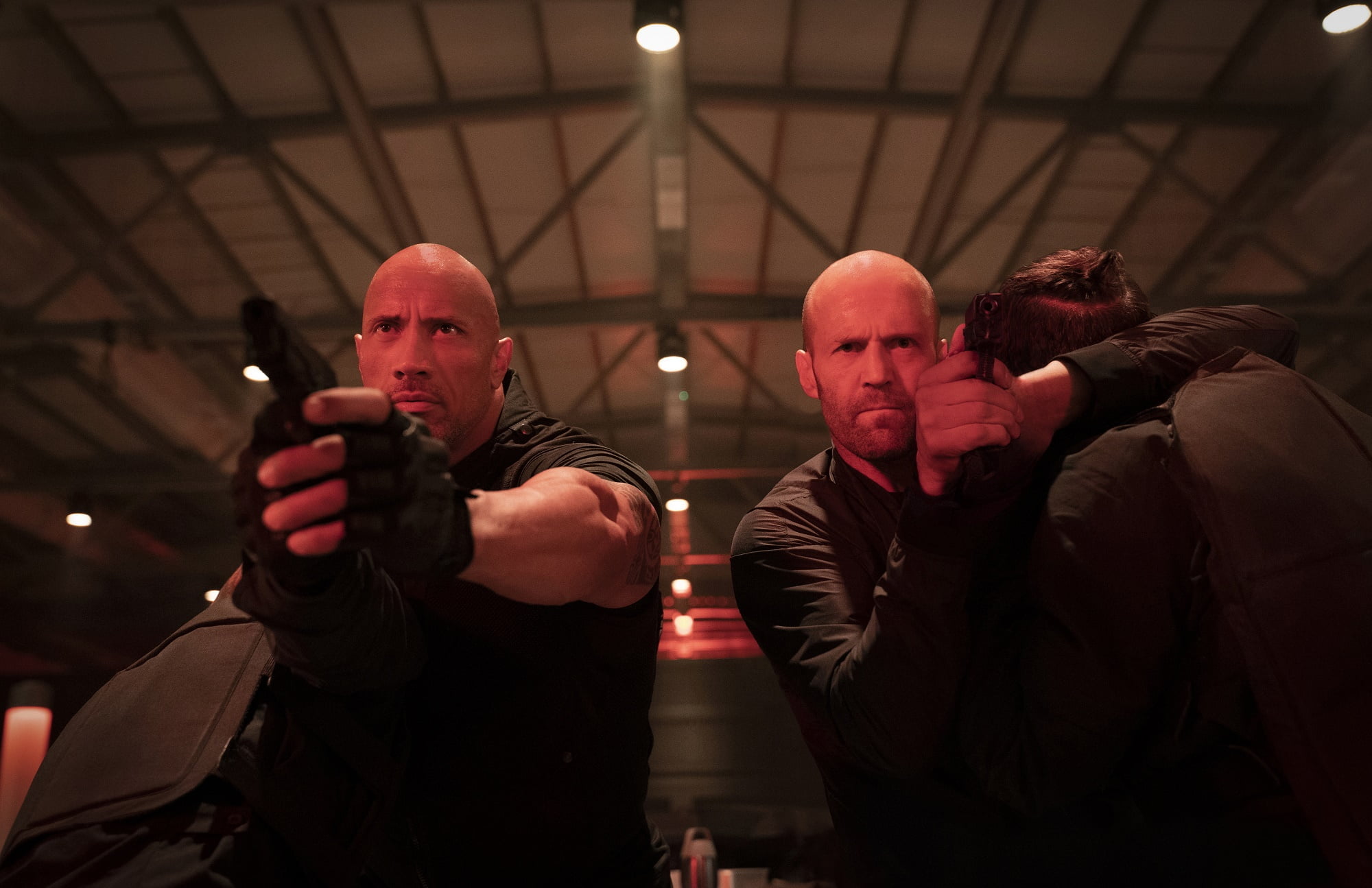 I took my first crack at writing an action movie screenplay when I was thirteen. There were at least five or six corny one-liners on each page, an explosion in every other scene, ludicrous plot contrivances and coincidences that are never explained, and a running gag involving a wayward duck that you really need to read the script to understand. I imagine if anyone had been crazy enough to produce it, the film would’ve played a lot like Fast & Furious Presents: Hobbs & Shaw, a spin-off from the mega-successful and incredibly dunderheaded franchise that built itself atop a mountain of flashy cars, Vin Diesel’s bald head and bulging biceps, corny sentiments about valuing “family” above all else, and some of the most ridiculous action set pieces ever devised.

Somehow, Fast & Furious Presents: Hobbs & Shaw doubles down on the silly stupidity that made its predecessors so memorable, while playing some of the franchise’s corniest and most groan worthy dramatic impulses for intentional laughs instead of the unintended sort. Considering that this film features only Dwayne Johnson’s lawman Luke Hobbs and Jason Statham’s criminal man of mystery Deckard Shaw and none of the other characters from the franchise are even mentioned, Hobbs & Shaw likely represents a diverging of paths from the rest of the series (probably because Johnson and Diesel reportedly loathe one another). It’s not a bad call. If one prefers the gear shifting, bloated plotting, and genial meatheaded bromances of the original franchise, the ninth entry in the Fast and Furious saga is just around the corner (reportedly sans Johnson). If viewers want relentless amounts of witty banter, wall-to-wall ass kicking, fewer car based stunts, and a far less convoluted plot to get in the way of things, Hobbs & Shaw will give them all of the killer with none of the filler. Given that the last Fast and Furious entry left me feeling more exhausted and confused than energized (after a trio of admittedly awesome action yarns), Hobbs & Shaw feels like a step in the direction I tend to prefer. Then again, if you hate these movies (and I know there are plenty of you out there, despite what the box office numbers say), this still has nothing to appeal to your sensibilities. Sometimes reviewing a movie comes down to how something hits you, and Fast & Furious: Hobbs & Shaw nicely tickled my sweet spot for what I like to see in a shallow, loud, noisy, and ridiculous action picture.

Sworn enemies Hobbs and Shaw are asked by the CIA to work together and track down a weaponized virus that can “liquify” someone’s internal organs within 72-hours of infection. The virus is on some sort of time release (which I honestly can’t explain if I tried), and is housed in capsules now residing in the body of Hattie Shaw (Vanessa Kirby), Deckard’s sister. Hattie, an MI-6 agent who has been framed for treason, injected the capsules into her body so they wouldn’t fall into the hands of Brixton (Idris Elba), a genetically enhanced super soldier working for an extremely wealthy and influential shadow company keen on speeding up the human evolutionary timeline. The blunt and unsubtle Hobbs and the suave, debonair, and ruthless Shaw have to find a way to save Hattie and keep the virus from spreading once the 72 hour time limit has elapsed and stay one step ahead of a relentless bad guy who can telegraph punches before they land, lift anything with ease, and is essentially bulletproof.

I’m still not sure if it’s a positive or a negative that I don’t care in the slightest about the plot that has been cooked up by Chris Morgan (who has worked on each franchise installment since the third one) and Drew Pearce (Iron Man 3, Hotel Artemis). Fast & Furious Presents: Hobbs & Shaw doesn’t need much more than a great behind the scenes team or technicians and craftspeople and the bottomless charisma of its four leads to succeed, but even by those standards things seem pretty relaxed. Elba’s villain certainly looks imposing, but it’s clear that this is functioning more as a stepping stone to future adventures than a solidly constructed stand-alone feature. The baddies are uninspired, interchangeable cliches that lean heavily on a lot of the same things Pearce during his time as a part of the Marvel universe. Brixton is essentially the evil Iron Man (right down to his “battle vision”), and the heroes bicker like they’ve walked straight out of a Shane Black movie. That’s all well and good when one considers that Fast & Furious Presents: Hobbs & Shaw has hired all of the perfect people for the job, but a bit disappointing when it comes to the overall potential for future installments. 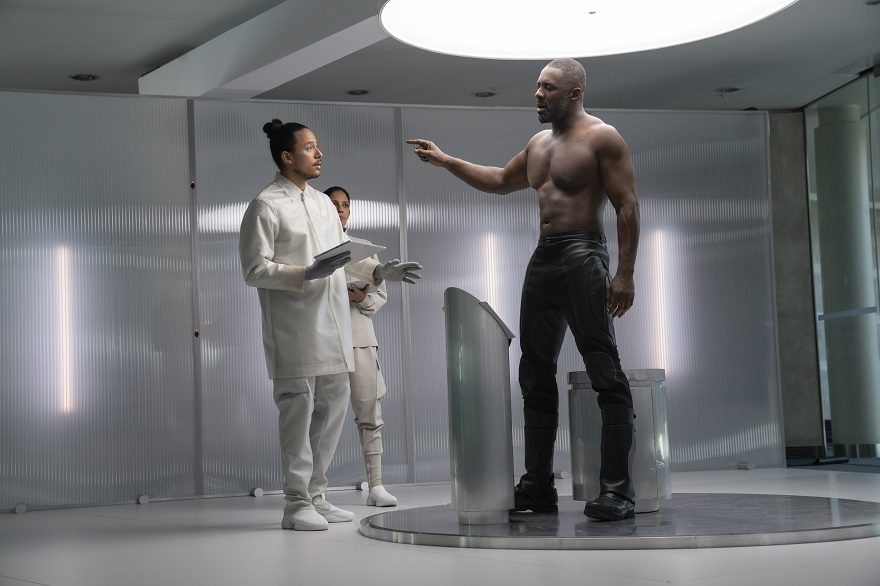 But honestly who cares when there’s so much ass to kick? I doubt anyone going to see Hobbs & Shaw is going for the plot. It’s a film designed for instant, immediate gratification. They’re going to watch Johnson and Statham do what they do best: squabble, crack wise, and fight each other or anyone unlucky enough to get in the way. Luke Hobbs is probably the best recurring character Johnson has ever portrayed. It’s possibly an even better use of his natural talents and charm than his wrestling persona, The Rock. He’s likable, helpful, just, and you don’t want to piss him off. By that same token, Statham hasn’t had this great of a showcase for his particular blend of humour and physicality since his earliest efforts. Some might think these are roles that Johnson and Statham could play in their sleep, but I prefer to liken it to watching Magic Johnson and Larry Bird having a particularly contentious game of one-on-one. The tension and camaraderie that keeps evolving and changing between the two is outstanding, and even when placed into opposition with any of the film’s supporting players (or high profile cameos), they still bring their A-game. They’re also given perfect scene partners in Kirby – who looks, sounds, and acts every bit like she could credibly by Statham’s younger sibling, and is the best new character the franchise has come up with since Deckard – and Elba, who looks like he’s having an absolute scenery chewing blast as the Bond-like baddie who keeps wasting time explaining his evil plans to the heroes when he should just be killing or capturing them.

Any new life that’s breathed into Fast & Furious Presents: Hobbs & Shaw and its well worn mismatched buddy cop and spy movie machinations comes from director David Leitch (John Wick, Deadpool 2, Atomic Blonde). Hobbs & Shaw might hit the same notes about family and working through differences to save the world, but it looks and moves differently from the franchise that spawned it. Perhaps unsurprisingly given Leitch’s past efforts and background as a stuntman, Hobbs & Shaw places more emphasis on hand-to-hand combat and shootouts than it does on car stunts. There are a couple of car chases (one involving Brixton’s Transformers-styled motorcycle and the other a high speed helicopter chase around a Samoan cliffside), but mostly Leitch prefers to watch Statham go to town on some fools with a toaster or revel in Kirby flat out eviscerating some poor stooges with a folding chair. The fights are rousing, inventive, and staged impeccably with Leitch’s love for neon lighting largely intact throughout the early going. Sometimes that’s all you need, and Leitch plays to his (and everyone else’s strengths).

Check out the trailer for Fast & Furious Presents: Hobbs & Shaw: