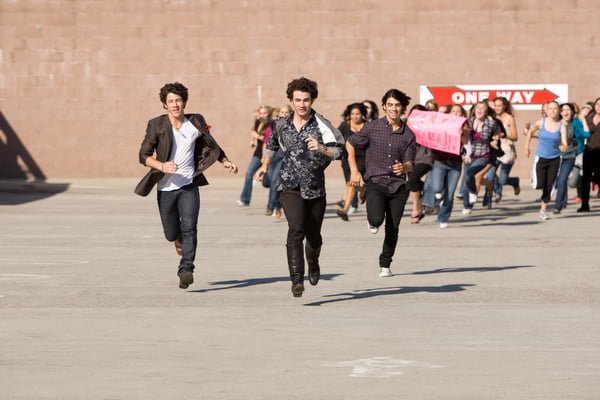 Short of being a Jonas Brothers fan, or a video game fanatic, this is a slow week in movie theatres, so to get you geared up I take a look ahead at some of the big films coming out this Spring. Otherwise, this week I take a look at the Jonas Brothers 3D movie, and Street Fighter: The Legend Of Chun-Li.

If by some strange chance the Jonas Brothers fans in your house haven’t heard about this movie, here are the basics: This big screen “experience” follows the Brothers on their “Burning Up” tour, with a peek behind the scenes at what happens as the boys perform for their fans.

Although reviews hardly seem necessary (the screaming fans will line up for anything Jonas), Kirk Honeycutt of the Hollywood Reporter was pretty plain in his article. “This tepid concert film does the Jonas Brothers no favors,” Honeycutt wrote, “not that the band’s tweener fans will notice.”

Street Fighter: The Legend Of Chun-Li
With all the girls lining up and screaming for the Jonas Brothers, the teenage boys will have to make-do with the only other major release of the week: a retread of the Street Fighter gaming franchise with Smallville’s Kristin Kreuk as Chun-Li.

Since the studio has decided not to screen the film for the press ahead of its release (a sure sign that this is the type of movie so bad, no reviews could possibly help it), there’s no solid proof this is a bad movie. That said, when you base a movie on a game where all the characters do is wail on each other, I don’t think you can expect too much.

Spring Movie Preview
Looking forward, beyond the doldrums of February, movie fans have a few blockbuster titles that will certainly be worth the wait. Here is a quick overview of the films coming out over the next couple of months.

March 6 – Watchmen
Based on the popular graphic novel by Alan Moore, Dave Gibbons, and John Higgins, Watchmen is set in an alternate 1985 where superheroes are protecting mankind, while the Cold War with the Soviet Union reaches a new pinnacle. When one superhero uncovers a conspiracy though, that could lead to a horrible future as that classic question comes to light: “Who is watching the Watchmen?”

March 13 – Race to Witch Mountain
Disney revisits Witch Mountain in this glossy remake that stars Dwayne Johnson, AnnaSophia Robb, and Alexander Ludwig. As in the original, aliens have arrived on Earth in the form of two gifted children (Robb and Ludwig), and they’re trying to get to Witch Mountain as a sinister group of people chase after them.

March 20 – Knowing
Nicolas Cage stars in Alex Proyas’ latest supernatural film about a man trying to save the world from a global catastrophe. Cage plays professor Ted Myles, who discovers that a strange sheet of numbers, stored in a time capsule when he was a kid, actually predicts every major disaster from the last 50 years, including three upcoming international catastrophes.

March 20 – Duplicity
Julia Roberts and Clive Owen are back together again in this thriller about two spies working for rival companies that are competing to find a formula that will make one of the corporations incredibly rich. But what happens to the duo if, between the dirty tactics and tricks, they find themselves falling in love?

March 27 – Monsters Vs. Aliens
The battle of the B-movies arrives in this 3-D animated film about a group of monster urged to become the heroes of Earth when aliens attack the planet.

April 3 – Fast & Furious
Vin Diesel and Paul Walker return to The Fast and the Furious franchise for another chapter of street racing and street fights. Set between the second and third films, this latest chapter has Disel as Dom Toretto, teaming up with his former enemy, played by Walker, to take on a new enemy.

April 10 – Observe and Report
Seth Rogen stars alongside Anna Faris in this dark comedy about a security guard dreaming of the day he can become a real cop. So when a flasher starts harassing shoppers, our budding hero sees his chance to save the day.

April 17 – Crank 2: High Voltage
In what might be one of the unlikeliest sequel, Jason Statham stars once again as Chev Chelios. At the end of the first film, our anti-hero Chev fell out of a helicopter in a final act to kill the man that injected him with poison. But, Chev didn’t die from the fall, and now a Chinese criminal syndicate has harvested his heart, replacing it with a machine that will only keep him alive long enough for them to try to harvest the rest of his organs… unless he can get his indestructable heart back.

May 1 to 29
Last of all, May promises no less than six huge, blockbuster titles. Since I don’t have nearly enough room to go through them all, here are the films you can at least start getting excited about.