Review: Blinded by the Light 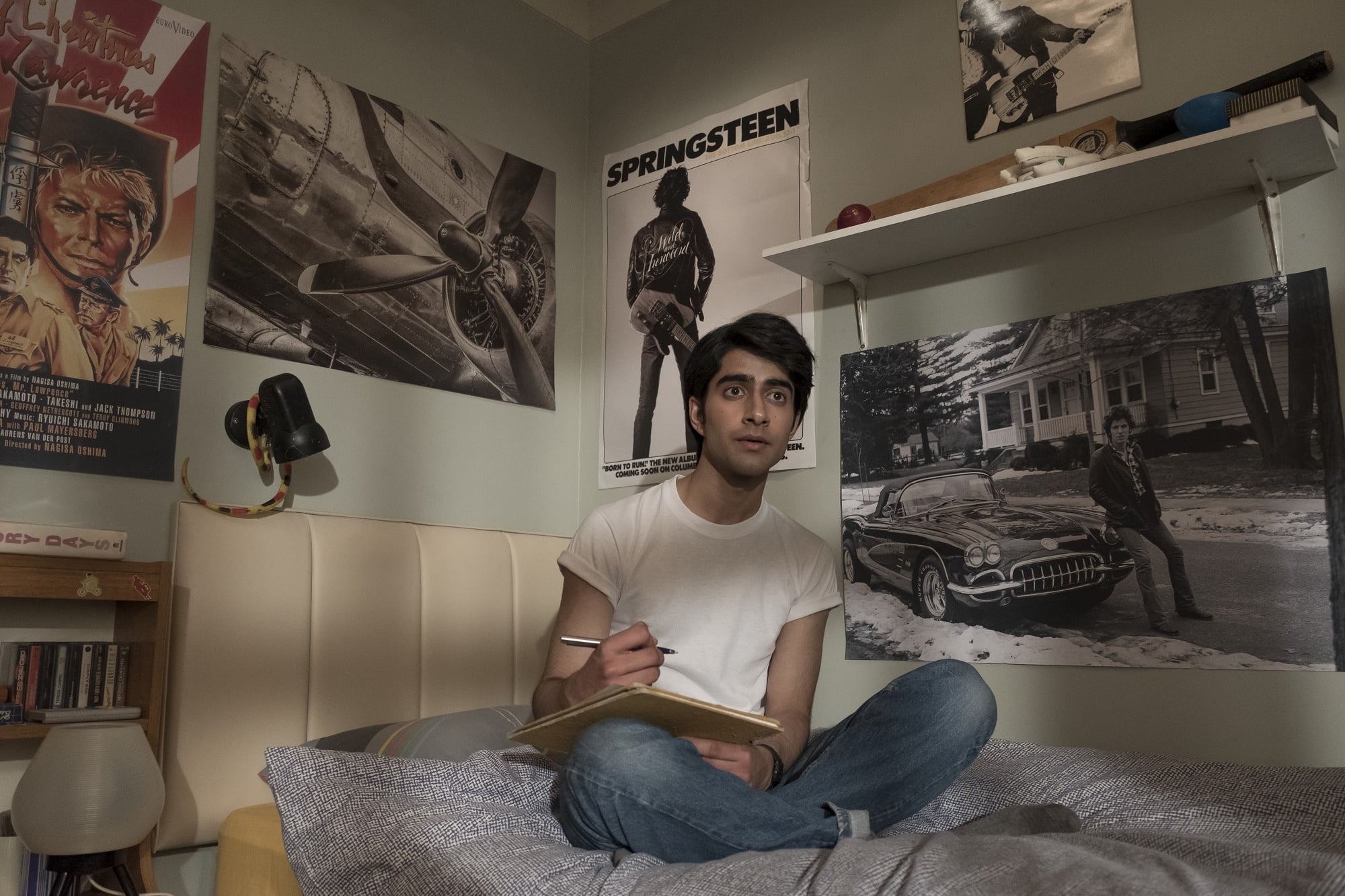 A sure-fire, if somewhat overlong crowd pleaser, Blinded by the Light does a fine job of illustrating the various ways that pop culture can pick us up when we’re feeling down, but also how fandom and adulation can become a crutch. Based somewhat on the true story of someone who found a lot of personal meaning in the songs of Bruce Springsteen back in the 1980s, Blinded by the Light certainly isn’t a work of blind adulation and fan service for devotees of The Boss, despite ostensibly being the latest in the long line of recent jukebox musicals. It’s a film about a budding creative type who was both saved and nearly ruined by his idolatry, and it’s a story that anyone who has ever grown up within a stifling culture and lived in a dead end town or city can relate to, even when the story itself seems to be biting off more narrative threads than it can chew in just two hours.

Blinded by the Light is co-written by Sarfraz Manzoor, who shared his own love for Springsteen in his memoir Greetings from Bury Park: Race, Religion, and Rock N’ Roll. Manzoor’s fictional surrogate in the film adaptation from director and co-writer Gurinder Chadha (Bend It Like Beckham) is Javed (Viveik Kalra), a sixteen year old British-Pakistani student living in the working class town of Luton, England circa 1987. Javed, who’s often referred to as “Jared” by some of his less cultured classmates, is constantly told by his resolutely conservative and traditionally Muslim minded immigrant father, Malik (Kulvinder Ghir), that Luton is a wonderful place to live, but the young man thinks it’s turning into a shithole. Racist attitudes towards Pakistani residents is on the rise and only growing more emboldened and brazen. Margaret Thatcher has just been reelected  as Prime Minister, and the unemployment rate across the country is set to top three million people, something the factory town of Luton is getting hit by particularly hard. Javed, who wants to be a poet and a writer, is constantly scolded by his father for indulging in artistic pursuits, but the young man doesn’t see the world in the same way as his father.

More predominant than the Springsteen heavy soundtrack and very much in line with Chadra’s other major successes, Blinded by the Light is rooted in a thoughtfully articulated and performed family dynamic that boasts a strong sense of cultural and historical authenticity. The period elements of Blinded by the Light aren’t employed simply for the sake of nostalgia, and in many cases, Chadha and co-writers Manzoor and Paul Mayeda Berges are actively avoiding such feelings. The family comes first, the friendships and the music are tied for second place, and while that’s a savvy move when it comes to building audience investment, Javed’s large family and their various problems make for an abundance of character beats that are nice, but never fully examined. Not much is said about Javed’s tirelessly working seamstress mother outside of a couple of scenes where she’s allowed to speak her mind or look openly concerned. Javed has two sisters: one who’s about to enter into an arranged marriage (Tara Divina) that we rarely get to see, and “the cool sister” (Nikita Mehta), who’s a lot more like Jared if one were to substitute South Asian music for Springsteen. The impending marriage weights heavily on the parents, but it’s a thread that’s frequently brushed to the side, and the film only once brings up the significance of Javed being the only male offspring in a traditionally Muslim household.

Every member of Javed’s family is interesting, but Blinded by the Light spends most of its non-musical energy fleshing out the most basic of rebellious teenager plots because it’s seemingly the easiest to understand and the thread that plays into Springsteen’s songs the best. Similarly, Javed’s relationships to his friends are only brought up out of necessity to keep the story fresh and interesting. At the start of the movie, Javed hangs out predominantly with Matt (Dean-Charles Chapman), the new wave loving white kid across the street who indulges and somewhat abuses the young man’s love of writing. Once the school year starts, Javed finds himself drawn to Roops (Aaron Phagura), a Sikh teen who turns his new buddy onto the music of Springsteen, thus setting into motion the film’s themes about rising up and out of a dead end existence. Javed also finds a love interest in the form of Eliza (Nell Williams), a politically minded classmate, and encouragement from his English teacher, Ms. Clay (Hayley Atwell). As with most young people, Javed is pushed and pulled between each of his friends and family members and what they mean to him, but there’s always a sense that Blinded by the Light has been trimmed down significantly from something larger and more ambitious without always knowing quite where to trim the story. There’s enough character and moving parts to Blinded by the Light to fill an entire miniseries, but Chadha always falls back hardest onto the easily explainable and all-too-familiar father-son dynamic, leading to a film that feels like it’s spinning its wheels while glossing over potentially richer elements and relationships. The plotting is sometimes a bit too convenient in its attempts to get between various points, leading to Blinded by the Light coming across as being rather simplistic for a film that’s tackling a lot of various social, racial, religious, and economic issues at the same time. Springsteen could cover these topics in five minutes or less, and Blinded by the Light sometimes struggles to do it in two hours. 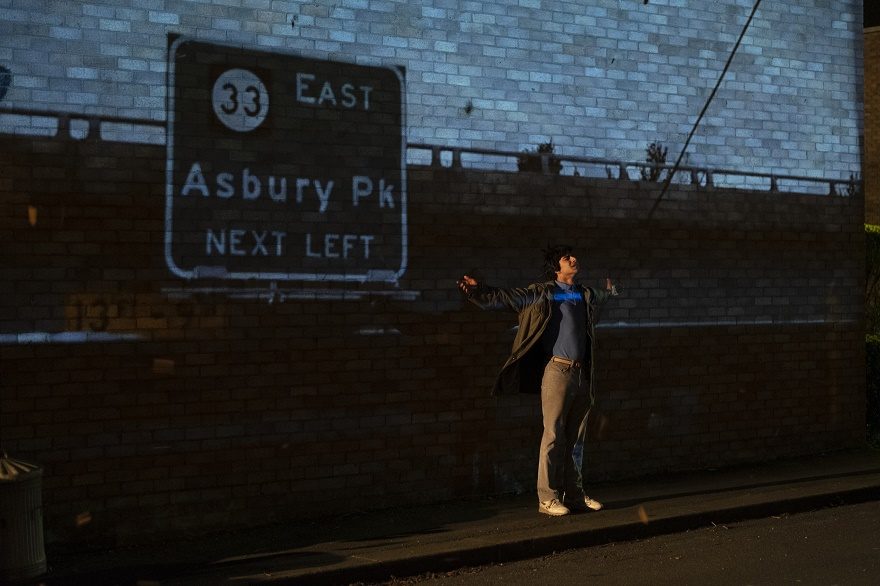 Chadha has never been an overly stylish filmmaker, and Blinded by the Light might be her least attractive looking effort to date, but that’s probably by design. Javed’s world and Springsteen’s songs were made with run down towns and downtrodden everyday men and women firmly in mind. Javed is drawn to Springsteen – who was seen by many high schoolers as a “dinosaur” by 1987 – because he represents an authenticity that wasn’t apparent in the pop and rock tunes that were all the rage at the time. Chadha and her material is more concerned with creating a distinct sense of time and place; a world of phonies, bigots, and bland centrists that values panache and a blind following of leaders over wrestling with complex issues of morality, race, and economic inequality. The prevailing sentiment of the 1980s was “what’s mine is mine, and you can have your’s, too, if you just stop caring about everyone around you,” and Blinded by the Light never loses sight of that insidious, intoxicating mentality; one that has come dangerously back into fashion over recent years and is especially prevalent in the film’s depiction of open and emboldened racism.

Visually, Luton looks like a place where no one has anything, and even people who seem to be doing well for themselves live rather modestly. It’s all rather drab and dour to look at, even during the film’s several fantastical musical numbers, but I don’t think there’s any other way to effectively highlight Javed’s malaise and the kinds of issues Springsteen talked about in his music. The only truly dazzling moment comes early into Blinded by the Light, when Javed first listens to a Springsteen tape, just as he’s about to give up on his dreams for good and in the middle of a horrific wind storm. The Boss’ lyrics start manifesting themselves on walls and like thought bubbles around Javed’s head, and it’s an effective depiction of how the right kind of music can stir deep emotions when listened to at the perfect time. It feels like something out of a Danny Boyle movie, but it’s a more effective visual depiction of musical euphoria than anything in the fellow British filmmaker’s similarly themed fantasy, Yesterday, from earlier in the summer.

Blinded by the Light wants to mount an overall charm offensive in a bid to make the viewer feel the troubles and joys of its main character throughout, and newcomer Kalra proves to be a perfect choice for the job. Not only does Kalra effectively distill Javed’s boisterous enthusiasms and crushing disappointments with a great deal of balance, but he’s also able to humanely depict his character’s flaws and self-destructive tendencies. Like most young people, he chooses to fixate on the things for far too long, and he lashes out – often subconsciously and without malice – towards anyone that questions his happiness. His dad might not get what he’s going through, but Eliza and Matt certainly do, and at various points when Javed leaves them hanging with his selfish behaviour, Kalra’s performance is at its most interesting and nuanced. Kalra, who doesn’t have many acting credits to his name just yet, has a veteran performer’s sensibilities to make his character’s positive and negative traits shine through equally, without ever turning too far in either direction to make viewers find him insufferable. He has wonderful chemistry with all of his co-stars (who are turning in great performances across the board), and he can give to the material as much as he’s taking from it. It’s unquestionably a star making performance.

Yes, like many traditional musicals, Blinded by the Light is one of those movies where characters randomly break out into song and dance or wander their way through homes, streets, and dance halls, but you don’t have to like that particular form of filmmaking or the music of Springsteen to appreciate what Chadha is going for here. Everyone has that one piece of pop culture that changed their life. If you try to explain such an artistic connection to an outsider, it will probably sound heartfelt, a little bit corny, and deal with emotions that they might not fully understand. Blinded by the Light is the kind of film that asks its audience to embrace those feelings, no matter one’s background. Blinded by the Light might follow a bit too closely to the crowd pleaser playbook, but it’s certainly effective.

Blinded by the Light opens in theatres everywhere on Friday, August 16, 2019.

Check out the trailer for Blinded by the Light: