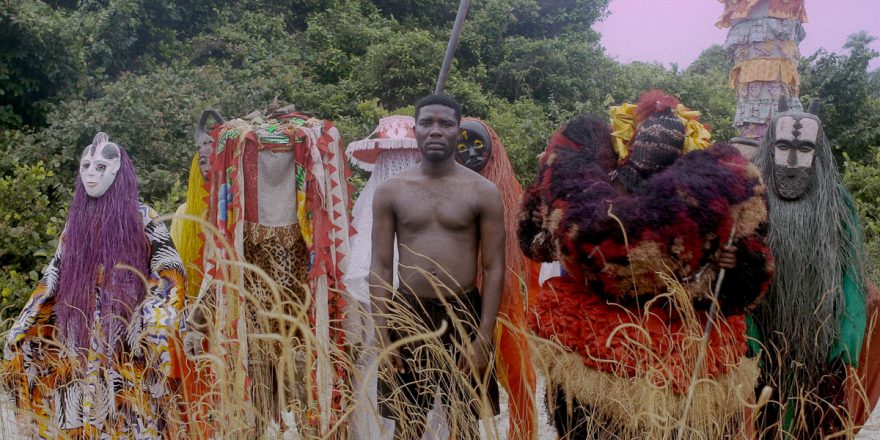 A unique work of DIY brilliance, trippy visuals, and thoughtful, culturally minded subtext, Nigerian filmmaker Abba Makama’s The Lost Okoroshi gets off to a blazing start before settling into a slower, duller groove.

Raymond (Seun Ajayi) works (quite poorly) as a security guard in Lagos, and is a generally lazy, easygoing guy who pays his wife so little attention that it’s a wonder they stay together. Every night, Raymond has increasingly vivid dreams of masquerades carried out by ancestral spirits that chase him. After conferring with a local chief, Raymond allows the purple furred, Okoroshi mask wearing spirit to catch him in his dreams. The next morning when he wakes up, Raymond has transformed into a voiceless, mystical being whose purpose is to spread joy throughout the land and punish the wicked.

The Lost Okoroshi has a delightful concept rooted in Igbo mythology, and Makama makes the most of his threadbare budget. It’s extremely rough around the edges, but The Lost Okoroshi is a labour of love and a shining example of some of the most exciting cinema coming out of Africa today. As Raymond’s spirit form shuffles through the streets of Lagos, The Lost Okoroshi is surreal, silly, and culturally rich experience.

But the energy that Makama exhibits early on slows down drastically with the arrival of an African studies scholar and the inclusion of a wildly over-the-top and perpetually argumentative “cultural preservation group” into the story. Largely gone are the set pieces, and in their place are lengthy discussions about how some like to claim ownership over cultural traditions and beliefs. There’s a great message in the latter stages of The Lost Okoroshi about how returning haphazardly to old customs in the modern age isn’t the answer to all of society’s ills, but it’s sometimes dull to sit through what seems like endless bickering and theorizing. It’s thoughtful, and The Lost Okoroshi deserves a lot of credit for not taking the easy road and giving viewers a thought provoking conclusion instead of a grand send off. It’s just that the final third of Makama’s latest is a major comedown after everything that comes before it.