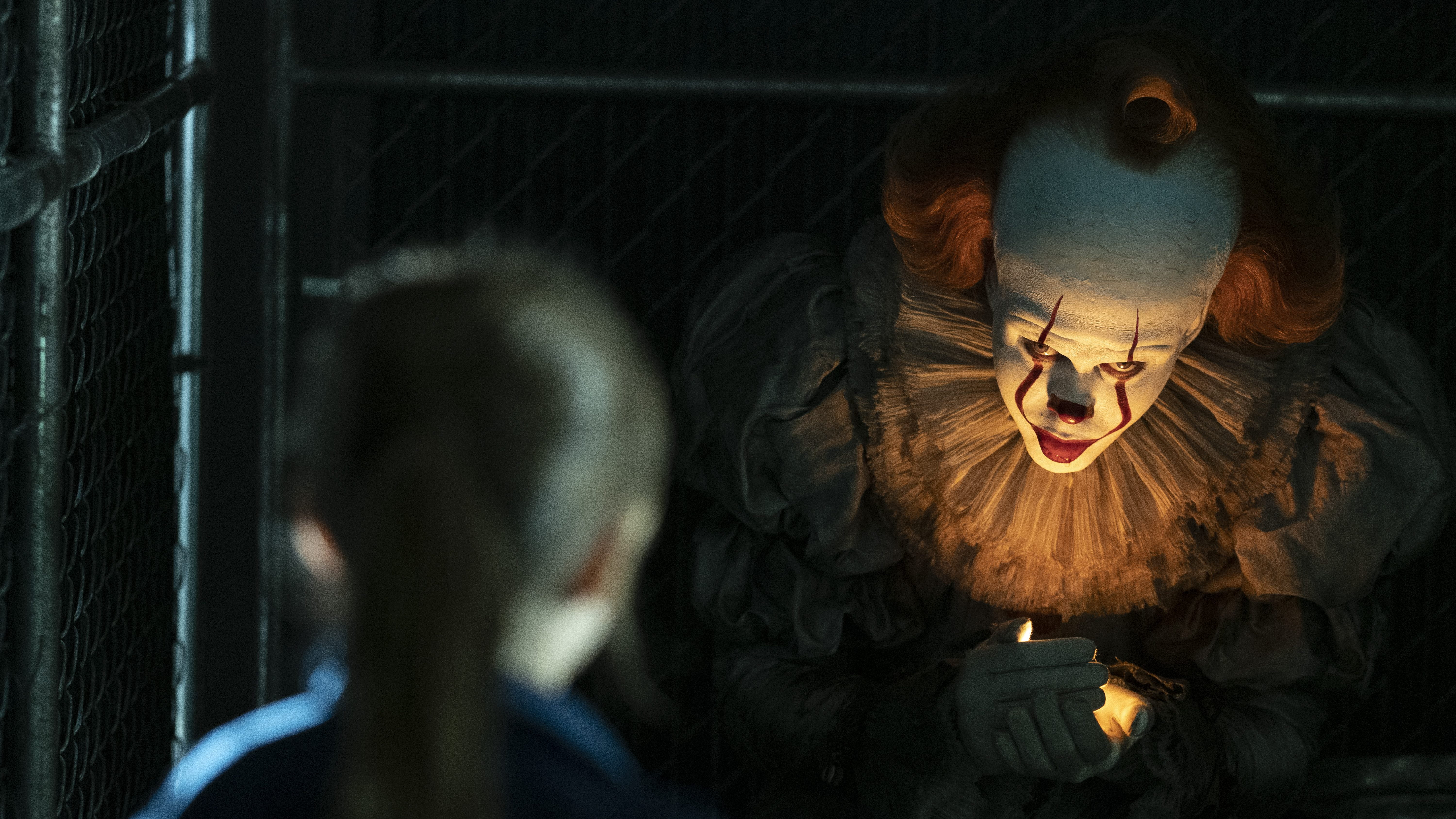 Welcome back to Derry, Maine. Population around 30,000, plus one terrifying monster.

As It Chapter Two opens 27 years later, the Losers Club are all grown up, but a big part of the film, like Stephen King’s incredible novel, takes place in the past, going back to what happened after the kids took on Pennywise at the end of It.

All the young actors are back, for a number of brief, interconnected scenes that set the stage for the adults, and it is honestly these young actors that give the film its heart and soul.

I like the adult cast a lot, but there’s a spark, a passion, and a chemistry that I just didn’t see in the scenes with their grown up selves.

Isaiah Mustafa is Mike, and he’s the last Loser living in Derry. He’s been haunted by Pennywise, played by the great Bill Skarsgård, and the monster’s origins, waiting and watching to see when It may return. When a series of grisly murders suggests the clown is back, he calls up all of his old friends, reminding them of the blood oath they made as kids to come back to Derry if Pennywise returned.

The catch is that none of the Losers remembers what they left behind, until they get back, and start facing Pennywise and his tricks.

The Losers all seem a little bit haunted by their past, but not to the degree you see in the book. James McAvoy as Bill is just a successful but somewhat hollow writer. Jessica Chastain is Beverly, and she’s focused on her childhood trauma, while Bill Hader is Richie, the comic relief; Jay Ryan is Ben the architect; and James Ransone is the grown-up hypochondriac, Eddie.

As Mike tries to convince the group that they need to stay and fight, even after they realize that Stanley (played briefly by Andy Bean) is dead and won’t be joining them, Pennywise has already killed at least three people. That sets the stage for a final showdown that takes a long time to come.

The film is a very close approximation of the story from the book, with a number of elements dropped in favour of keeping the story somewhat more manageable. The problem is that the cuts to the story make a lot of the film feel isolated and discordant, and the film is still close to 3 hours long.

I don’t miss a lot of what was cut–I would say I’m fairly thrilled by a lot of the cuts–but the film needed tinkering to keep the story flowing, and that required either more creative licence, or another angle.

What’s worse, while It didn’t feel all that scary, at least to me, Chapter Two ends up going for a lot of cheap scares, and a main plot point about collecting tokens just feels like a lame attempt to separate the characters.

The problem being that a lot of what made the book fantastic, are elements that are damn near impossible to bring to life properly in a movie and screenwriter Gary Dauberman needed to be more creative.

Looking at the book though, how do you really conceptualize metaphysics, souls, and so much more that carries the story, especially near the end of the book, without taking away from the physical aspects of the story that the film relies on?

To be honest, the other problem to me is that I find it hard to even label It a horror story.

The novel is a psychological drama about growing up, and the demons we face as children, and how they haunt us as adults, and there are pages upon pages that deal with the kids and their relationships, and not a mention of any scary clowns.

Don’t get me wrong, I loved the first film, and I like It Chapter Two quite a bit, but the sequel does not live up to the hype the first film established.

My biggest complaint of all though is that I don’t see the chemistry between the adults that I see from the young actors, and in this story, that’s vital. Whether it was direction, or just the way teenagers can naturally bond better than adults, I was a bit disappointed by the cast.

So my hat goes off to the young cast, including Jaeden Martell, Sophia Lillis, Jeremy Ray Taylor, Finn Wolfhard, Chosen Jacobs, Jack Dylan Grazer, and Wyatt Oleff. For me, these kids are the perfect cast to play the Losers, and they are still the best part of both films.

If you loved them as much as I did, they are still around, but the film definitely saves some of the best moments with them for last.