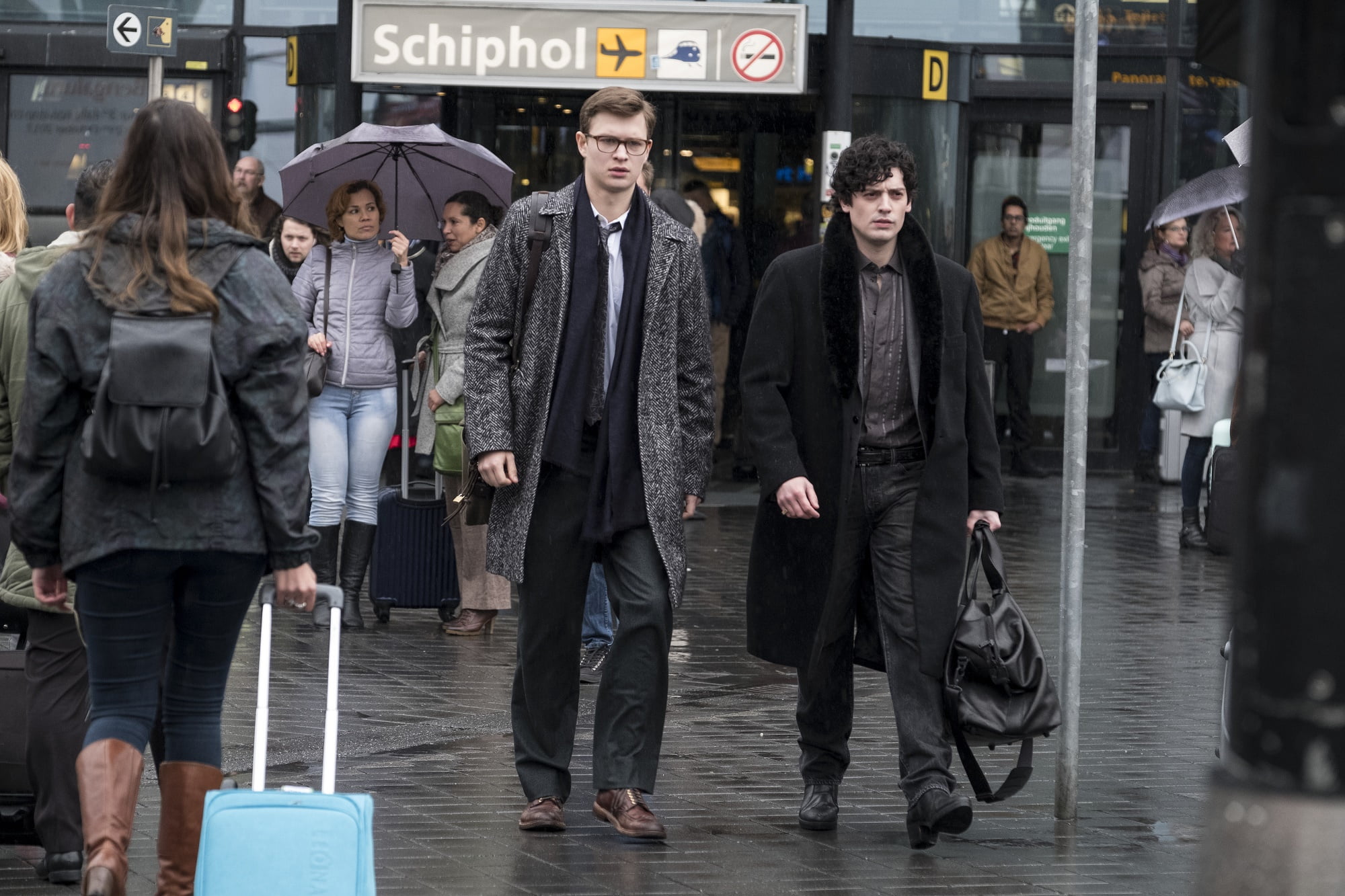 Adapting something as sprawling, highly detailed, strange, and twisty as Donna Tartt’s Pulitzer Prize winning 2014 novel The Goldfinch for the big screen might’ve been an impossible task for anyone to attempt, but director John Crowley and screenwriter Peter Straughan certainly give their all with this uneven, sometimes bizarre, but never boring literary epic. It’s bound to divide audiences and leave some viewers cold, but then again, so does Tartt’s book. The Goldfinch isn’t a subtle book and Crowley’s adaptation isn’t a subtle movie, but within its barely contained, shaggy construction, there’s plenty to like, admire, and  be entertained by, even when saddled with an elephantine two-and-a-half hour running time that feels every bit of that length.

The Goldfinch is a time-shifting story that unfolds across years in the life of a young man named Theodore Decker, played by Oakes Fegley as a teenager and Ansel Elgort as a twentysomething. Theodore watched his mother and several others die after a bomb goes off at a New York art gallery in 2002. Essentially orphaned because his alcoholic, irresponsible actor father, Larry (Luke Wilson), has been out of the picture for years, Theodore is taken in by a wealthy friend of the family (Nicole Kidman) who has two sons, a stepson, and a daughter of her own. Theodore is an odd fit for the blue blooded Barbours, with his surrogate mom and brotherly best friend (Ryan Foust) being the only family members to show the boy kindness. Around this same time, Theodore strikes up a friendship with a kind-hearted antique furniture dealer (Jeffrey Wright), who lost his business partner in the bombing and now looks after the dead man’s daughter, Pippa (Aimee Laurence as a youth, Ashleigh Cummings as an adult).

After about an hour of set-up the Barbours and their luxurious, aloof lifestyle – while getting brief glimpses of adult Theodore’s messy life peppered throughout – The Goldfinch shifts things again when Larry decides that he wants custody of his son. Larry forces Theodore to move to a virtually deserted shithole of foreclosed prefab homes in the California desert, where he lives with his ditzy, younger girlfriend, Xandra (Sarah Paulson). The uncouth, scheming, and reckless Larry does everything possible to make Theodore’s life a living, embarrassing hell, but during this time, the young man makes a valuable friend in Boris (Finn Wolfhard as a kid, Aneurin Barnard as an adult), a Russian boy with an equally terrible dad who’s one of the only other residents in the desolate area. Boris proves to be a bad influence on Theodore, introducing him to the joys of booze, pills, and acid, but as a friend he’s a resoundingly loyal and thoughtful one.

The mystery at the heart of The Goldfinch doesn’t surround who committed the bombing or if anyone around Theodore had anything to do with it. Instead, the story looks at the trauma suffered by Theodore over the years that remained unexamined or treated via his connection to a painting; the titular masterpiece that Pippa’s father frantically told the young boy to swipe from the rubble and protect in the wake of the bombing. It requires a lot of work to keep this in mind throughout The Goldfish because it keeps adding so many characters and new pathways for Theodore to follow that it all becomes rather hard to buy into without a healthy suspension of disbelief.

Theodore’s relationship to the painting and how its checkered history acts as a metaphor for his current situation is the focus of the film’s final third. As an adult, who has relocated back to New York City, Theodore is working in antiques, and carrying himself like a man of class and taste, with his bespoke suits, stylish eyewear, and supercilious charms masking the fact that he has an out of control painkiller addiction and his impending marriage to his former surrogate sister is pretty much a loveless sham. Around this time, Theodore and Boris reunite and key truths about the painting are revealed. 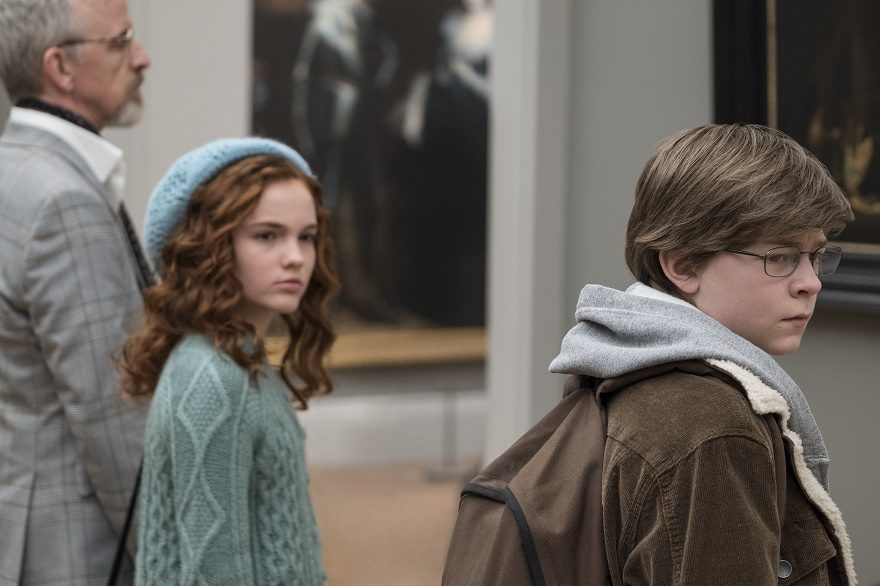 Not everything connects or makes a lot of sense in The Goldfinch, but then again, Tartt’s novel might be one of the most critically contentious Pulitzer winners of all time. It’s hard to say that a story with so many shifting tones and emotional settings – which range from comatose to heart-stopping – goes off the rails. In order to make such a claim, one would have to build tracks to begin with, and the overall unmoored approach adopted by Crowley (Brooklyn, Intermission) and Straughan (Tinker Tailor Soldier Spy, The Snowman) is one that makes sense for a story of a young man who perpetually feels out of place and unloved by the world around him. Anyone who previously complained that Tartt’s source material was overlong, indulgent nonsense won’t suddenly be converted by Crowley and Straughan’s efforts, but those who found something enriching in the pages and anyone unfamiliar with the text should find a considerable amount of investment in wondering just where The Goldfinch might be going next.

Straughan’s dialogue is chock full of frequently overwritten, hammy approximations of how rich people or white trash types converse with each other, but one couldn’t accuse the screenwriter or ignoring Tartt’s original approach. The strangeness and ineffable sense of longing present in the book also comes through rather well, especially during the middle third’s examination of Theodore and Boris’ friendship. That’s the strongest section of the film, but unfortunately it comes after a wheel-spinning, world building, and maudlin opening section and sandwiched before a final act detour that turns into a thriller. None of these things go together perfectly now, but they never went together perfectly in the first place. The Goldfinch was a success as a novel because it blended high society trappings with low class storytelling tropes, an eye for detail, and a talent for language. The film adaptation of The Goldfinch stumbles mightily over the love for language – with characters who staunchly refuse to sound like actual human beings – but everything else feels spot on.

It’s hard to keep a consistent and engrossing pace going with such material, but Crowley does his best and the cast seem more than up to the challenge of keeping things snappy and engaging, even when some of the choices made seem to be working against the material. Kidman delivers her turn in a strange, almost alien monotone, but that’s how the character has been written, so one can’t accuse her of phoning anything in. Wilson can’t quite get a handle on playing an irredeemable asshole, but there are a few moments of brilliance in his performance. Wright brings a considerable amount of warmth and empathy with his turn as one of only two truly decent people in the story. Fegley and Elgort make for charismatic and sympathetic leads, while Wolfhard and Barnard do the best they can to overcome their character’s thick and distracting Russian accent. Crowley seems to be giving his cast plenty of space to find the tics and eccentricities of his characters, and although the script begs to disagree, there’s an almost improvisational quality to The Goldfinch. It might be because the increasingly convoluted storyline seems to be making everything up as it goes along, but at least the actors perform like they know what they signed up for.

So too does masterful cinematographer Roger Deakins, who doesn’t deliver one of the most memorable films of his career, but still puts in a stylish effort that’s better than most of his peers and contemporaries. Deakins (whose use of light and movement remains unparalleled) and film’s top notch production design and costuming departments give The Goldfinch a degree of technical respectability and visual sheen that’s required to suspend disbelief long enough to remain invested in a story that’s more than a little silly. Crowley has made sure that every frame of The Goldfinch is dripping with prestige, even when some of that distinction isn’t warranted or supported.

The Goldfinch, as a novel, has been dismissed by many critics as a tawdry sort of paperback read that has been elevated to a certain level of esteem because it just so happens to take place among a group of wealthy elites, and while I can’t exactly argue with such claims, I would suggest that there’s more to Tartt’s work and Crowley’s adaptation of it than its detractors give it credit for. As a depiction of how post traumatic stress and broken family bonds can create monsters beneath the skins of the most seemingly well adjusted people, The Goldfinch has a remarkable amount of poignancy and truth if one wants to look past the obvious plot mechanics. While the story revels in opulence and looks down upon anyone making less than eight figures a year, it’s in the service of an interesting (albeit half-baked) critique on the nature of privilege and how social shunning can still exist within members of the same tax bracket. Yes, the plot is wild, woolly, silly, unashamedly melodramatic and out-of-control, but it’s certainly entertaining, whether you think of it as a cinematic car crash, an ironic literary adaptation, or an earnest, genuine work of art. There any right answers when talking about The Goldfinch, either as a book or as a film, but the best effort has been given here to adapt a book that probably couldn’t be adequately adapted in the first place.

The Goldfinch opens in theatres everywhere on Friday, September 13, 2019.

This film was screened as a part of the 2019 Toronto International Film Festival.

Check out the trailer for The Goldfinch: