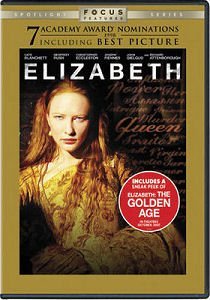 Elizabeth
Leading up to the theatrical release of Elizabeth: The Golden Age next month, director Shekhar Kapur‘s original Academy Award-winning film is being re-released on DVD this week. Loosely following the rise to power of England’s Queen Elizabeth I, the film stars Cate Blanchett as Elizabeth, with an amazing supporting cast that includes Geoffrey Rush, Christopher Eccleston, Joseph Fiennes, and Richard Attenborough, to name a few. Elizabeth takes a lot of liberties with the historic life of England’s greatest queen, but it is a dramatic and beautiful period film and, as always, Blanchett is incredible. The DVD also includes two making-of featurettes and a sneak peek of The Golden Age.

Death Proof
Released earlier this year as a double feature with Robert Rodriguez’s Grindhouse, Quentin Tarantino‘s Death Proof wasn’t exactly a hit in theatres. Taking a page from the exploitation films of the 70s, Death Proof is a sleazy, cinematic extravaganza about two women avoiding a murderous stuntman who is using his killer car to execute an evil plan. As usual, Tarantino wrote, directed, produced and shot this film, which stars Kurt Russell as Stuntman Mike, and features Rosario Dawson, Vanessa Ferlito, Jordan Ladd, Rose McGowan and Sydney Poitier. Definitely not a film for everyone, but if you’re a Tarantino fan you can’t go wrong.

The Film Crew: Killers from Space
Take any bad science fiction film from the 50s or 60s, add in a goofy commentary from three comedians, and you would be watching The Film Crew. Originally known for their series Mystery Science Theater 3000, which followed the same premise, the show features Bill Corbett, Kevin Murphy, and Michael J. Nelson joking along to an all-new selection of hilariously bad cinema. The results are sometimes hit and miss, but when the guys get it right, they are very funny. Clocking in at 90 minutes the DVDs are a bit long, but they’re still a lot of fun.

Terry
Starring Shawn Ashmore as Terry Fox, CTV’s made for TV movie Terry follows the real-life story of one of Canada’s most famous activists. As many will remember, Terry Fox was the dedicated young man who decided to run across the country to raise money for Cancer research following the loss of his leg to the disease at the age of 18. Ashmore gives a great performance in this touching story that remains remarkably accurate to Fox’s life.

Other new releases this week include the drama We Are Marshall, about a university football team that tries to endure following a plane crash that claims some of the team; Lucky You featuring Eric Bana as a tournament poker player with a number of personal problems; and re-releases of the swords-and-sandals epics Troy, starring Brad Pitt as Achilles, and Alexander, starring Colin Farrell.

Finally, for television fans there are also a number of new seasons available on DVD this week. Arriving this week you can find season four of CTV’s hit show Corner Gas, Family Guy volume five, Smallville season six, the seventh season of Married… with Children, and the final season of Everybody Loves Raymond.