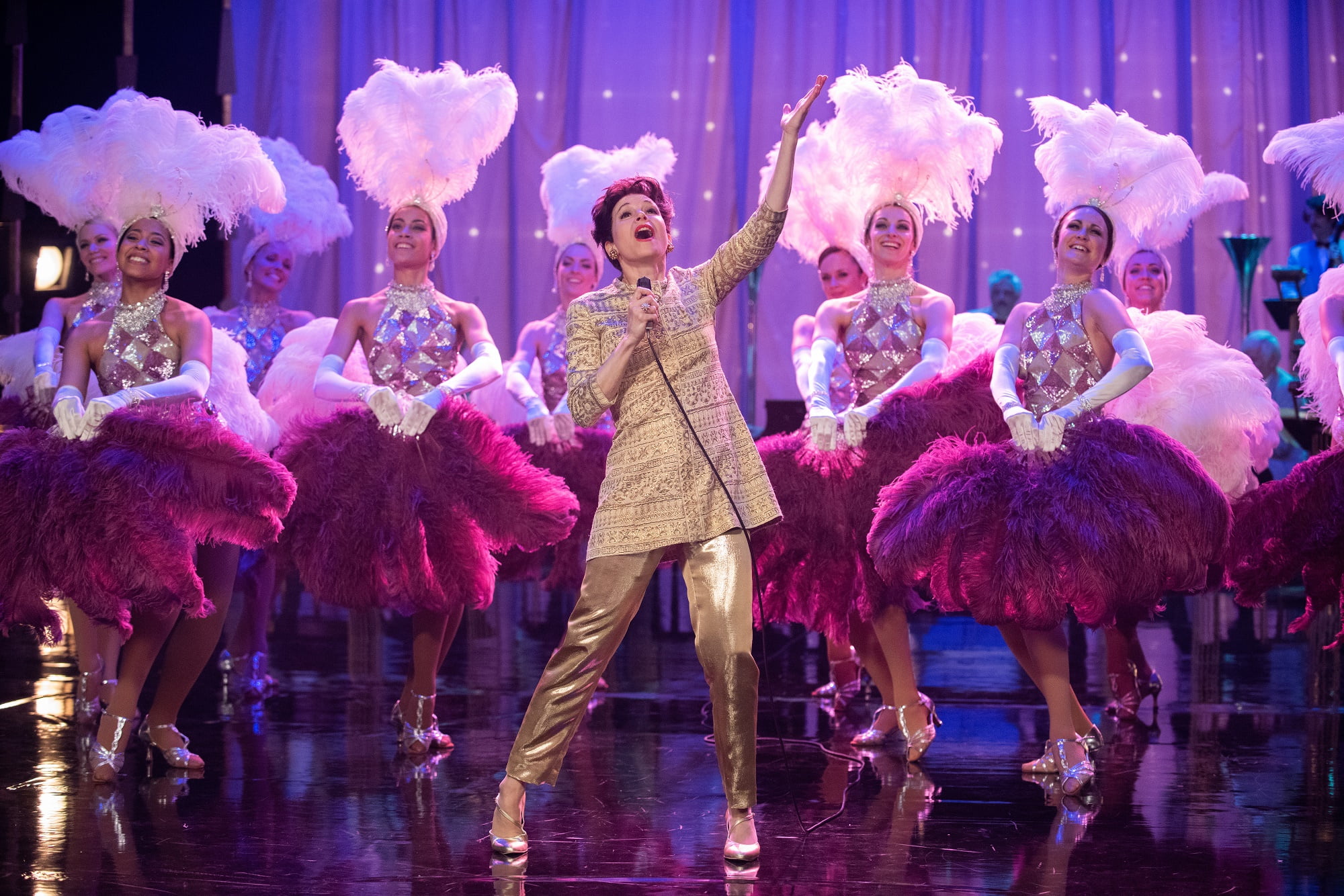 Swerving around many of the cliched potholes modern day biopics about famous performers all too frequently and gleefully drive over at full speed, Judy smartly profiles its larger-than-life subject and talent at a couple of fixed, well chosen points in time rather than mounting a standard riches to rags tale. Bolstered immeasurably by an uncanny and captivating performance from Renée Zellweger as a middle aged and increasingly broken Judy Garland – in a role the actress was seemingly born to play – Judy occupies a comfortable middlebrow biopic sweet spot between the smartly written, but still easily digestible My Week with Marilyn and the more experimental, boundary pushing, unflinching, and playful Rocketman. It’s familiar enough for those who like their biopics to be as comforting as plain white bread with a side of warm tap water, and still daring and clever enough to remain interesting for audiences who expect a little more from their performing arts pictures than a highlight show.

Judy, which is based on Peter Quilter’s 2005 Tony nominated stage show, End of the Rainbow, looks at Garland predominantly during the months and weeks leading up to her death of the actress and singer in 1969 at the age of 47. The film opens with Garland dragging her youngest son (Lewin Lloyd) and daughter (Bella Ramsey) to perform alongside her for a few hundred bucks a night. The good will she built up in Hollywood has largely been squandered, and the alcoholic, pill popping Judy has been branded as unreliable and uninsurable. With nowhere left to turn, Judy reluctantly takes an offer for a four week residency performing at the Talk of the Town supper club in London. In typical Garland fashion, when she’s on top of her game, there’s no one better. But when she’s feeling low or in the deep end of her addictions, she’s a wreck.

Instead of framing Garland’s story merely as a cautionary one, award winning stage director Rupert Goold (True Story, The Hollow Crown) and adapting screenwriter Tom Edge paint Judy in a sympathetic light; a woman whose ego, neuroses, failed relationships, inconsistent parenting, depression, and addictions were the result of insidious grooming practices from an early age. If Judy has a villain, it’s studio head Louis B. Mayer, the ominously hulking and lurking MGM studio head, seen here in flashbacks, who abused younger Garland (played exceptionally by Darci Shaw) through fear, intimidation, and negativity. Every internal demon was created by a man who was keen on running his prized new foal swiftly into the ground before her voice started to falter and she wasn’t cute enough for the American, ticket buying public anymore. Judy isn’t framed as the story of a famous woman who gave in easily to excess and fame, but rather a tragic portrait of someone who was made to feel worthless in spite of her talents and instilled with poor coping mechanisms from an early age. Both periods depicted in Judy are wrenching, and Goold and Edge have crafted a stripped down take on biopic conventions that doesn’t make one feel like it’s necessary to see all of the suffering that happened between these two points to better understand the character of Garland.

Outside of the formative, but sparingly employed flashbacks and a well paced set-up that brings Garland to London in the first place, Judy is predominantly a backstage drama. Garland’s assigned handler, Rosalyn Wilder (Jessie Buckley, who continues to impress), tries every trick in the book to ensure that Judy makes it to the stage every night, while the club’s owner (Michael Gambon) starts expressing some degree of buyer’s remorse, never certain if he’s going to get a great show out of his star or no show at all. A younger, gold-digging entrepreneur (Finn Wittrock) starts a fling with Garland, hoping that he can use her waning star power to help ignite some of his loftier business propositions. On paper, the Talk of the Town gig seems like an easy one for someone like Garland, but the continued push and pull she experiences and the emotional toll of doing a headlining show only compounds her demons. She wants to be loved and respected, but Judy can’t love and respect herself after years of abuse and self neglect. 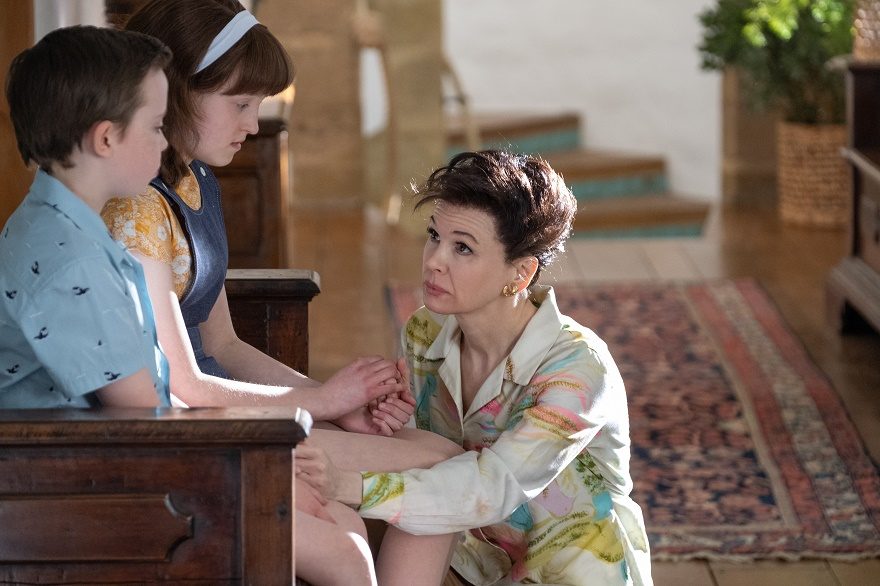 The side characters throughout Judy aren’t as deep as the titular figurehead, but they don’t necessarily have to be. Buckley and Wittrock are basically on hand to push the story in certain directions, react accordingly to shifting moods and tones, and get Zellweger’s Judy to wherever their characters need her to be at any given moment. They’re not as thinly written as to be considered props, but this is assuredly the Judy Garland show, and no one is meant to outshine the star, with Zellweger commanding the narrative at every turn.

Zellweger wisely never commits to delivering an outright impersonation of Judy Garland, but she certainly has the performer’s mannerisms, speech patterns, and inflection down to a science. It’s a well researched and delivered performance, but not one so calculated and rigid that it doesn’t allow any humanity or empathy to shine through. Zellweger, like most of the finest actors tasked with playing famous people, assumes the pain of the character they’re playing without ever theorizing about what it must’ve felt like to be the broke, virtually homeless, and misunderstood latter day Judy Garland. It’s a performance that pays reverence to the aspects of Garland’s persona that made her such a memorable and dominant stage and screen icon while remaining instinctual enough to feel like the character is still a flesh and blood human being. It’s not surprising to see Zellweger knock this role out of the park, but it’s nice to report that she brings more to the role than one might expect.

The stage roots of Goold and Judy’s material still show through. The backstage stuff in London and her struggles to secure a better life for her kids stateside aren’t all that captivating to behold if Judy isn’t on stage, but the performance numbers (especially the heartbreaking moment where the little shred of credibility she had left implodes in front of a live audience) are given an appropriate level of respect and flash. The flashback sequences, while sometimes a bit too on-the-nose in terms of the writing, are also visually memorable, with most of them taking place on the set of The Wizard of Oz, which recontextualizes an American movie classic as a waking nightmare for the person who starred in it. Judy sometimes looks like a television movie that has been given a slightly bigger budget, but the strengths of the film vastly outweigh the weaknesses, and Goold puts greatest emphasis on the beats that need it the most.

Much like the desperate final gig Judy Garland takes on to salvage what’s left of her career, Goold’s film is a one woman show with plenty of interchangeable background elements. But oh what a one woman show it is. Thanks to some intelligent framing and Zellweger’s entrancing leading turn, Judy doesn’t need much else to dazzle and move viewers. It’s certainly better than any number of musical biopics from recent memory that plod along through the life of a famous subject, and these days, that counts for a lot.

Check out the trailer for Judy: