Review: In the Shadow of the Moon 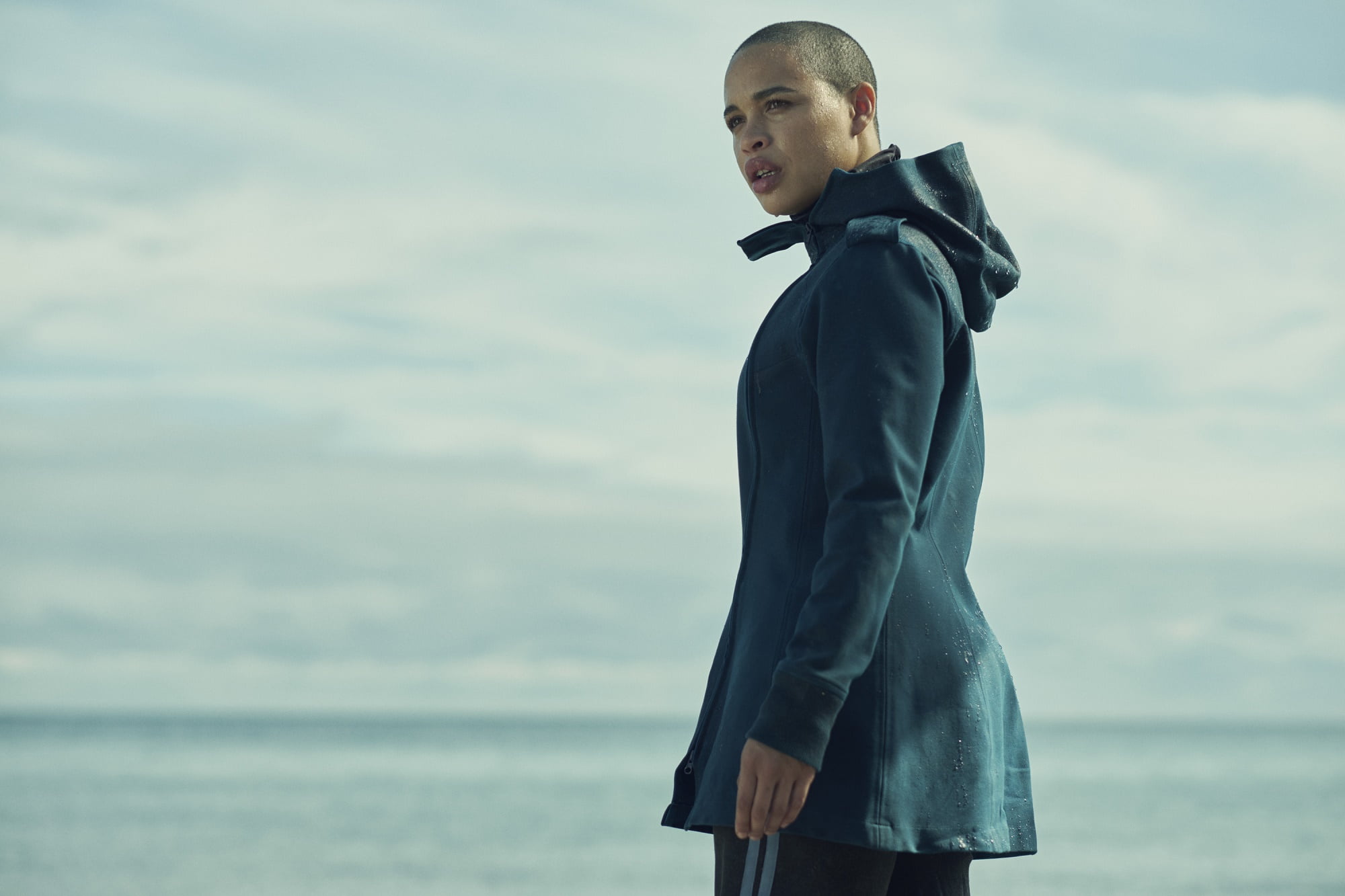 A satisfyingly twisty and original take on traditional gumshoe and time travel tropes, In the Shadow of the Moon is the rare sort of film that keeps redefining audience expectations while the core story is still unfolding, right up until the final scene. A rare breed of brooding sci-fi thriller that’s closely related to divisive, heavily detailed cult classics like Dark City and Predestination, In the Shadow of the Moon pays off nicely for patient viewers capable of suspending their disbelief long enough for the big reveals to arrive. The moral and social underpinnings of the latest from director Jim Mickle (Cold in July, Stake Land, We Are What We Are) are a lot murkier, but on the whole In the Shadow of the Moon will leave mystery buffs riveted and casual genre enthusiasts surprisingly moved by the end of it all.

Tommy Lockhart (Boyd Holbrook) is a Philadelphia beat cop with a very pregnant wife working the overnight shift in 1988. One fateful evening, Tommy and his partner, Winston Maddox (Bokeem Woodbine), are called to several grisly crime scenes where various, seemingly unconnected victims – a short order cook, a bus driver, a concert pianist – have spontaneously bled out all over the place, with their brains liquifying in the process. Keen on rising to the rank of detective, Tommy tries to stay one step ahead of his power hungry lieutenant brother-in-law (Michael C. Hall) and crack a case that seems to revolve around a serial killer. Tommy tracks down and gives chase to the woman responsible for this rash of poisonings – a mysterious black woman in a hoodie with a nasty hand injury (Cleopatra Coleman) – and things seem to be solved by the end of the night. What Tommy doesn’t realize is that he has set into motion a course of events that will see the same crimes repeated every nine years on the anniversary of the first incident.

After a brief flash forward at the opening to 2024 that suggests things will end badly for all involved, In the Shadow of the Moon divides itself up into chapters set in 1988, 1997, 2006, and 2015, all of them revolving around Tommy’s increasingly manic and determined mindset. Without giving too much away, Tommy’s first encounter with the mysterious killer marked a formative time for the officer in more ways than one, and each subsequent run-in that they’ll have over the years adds more pieces to the puzzle. While the title somewhat refers to Tommy’s encounter with a physicist (Rudi Dharmalingam) who suggests all of these crimes could be tied to the arrival of the supermoon, that ultimately means very little to the story. In the Shadow of the Moon – savvily written by Gregory Weidman and Geoffrey Tock – is an old school detective thriller first, an unlikely family drama second, a time travel flick third, a suspense thriller fourth, and anything involving theoretical astronomy might come in a distant fourteenth or fifteenth place in this genre mash-up.

With In the Shadow of the Moon, it’s clear that Mickle wants to underline the parallels between Tommy’s case and the modern state of American politics. When the story flashes ahead to 1997, protestors who seem to be written in the vein of the Black Lives Matter movement, are everywhere voicing their outrage that the police and media have said nothing about the suspected killer other than mentioning that she’s black and female. While it seems like these omnipresent protestors (who pop up in the strangest and most unsubtle of places) are being mocked at their first appearance and things start to feel a bit queasy, In the Shadow of the Moon slowly shifts gears and plays on those audience expectations rather brilliantly, even if the story ultimately builds to a message that has disdain for both sides of the current American political divide without offering any suggestions in either direction. To make a film that this boldly asks whether people are born into evil or they become warped over time in this violent a manner is a bit of a spicy take to say the least. It’s a strangely political movie, but one where the viewpoint of the story is constantly shifting to the left and right, making it both maddening and a perfect encapsulation for the era we currently live in. Like most solid sci-fi yarns built around time travel, it looks to the past and future to explain where we are today and where we’re heading, even if that final destination is bound to raise some eyebrows by the time it arrives. 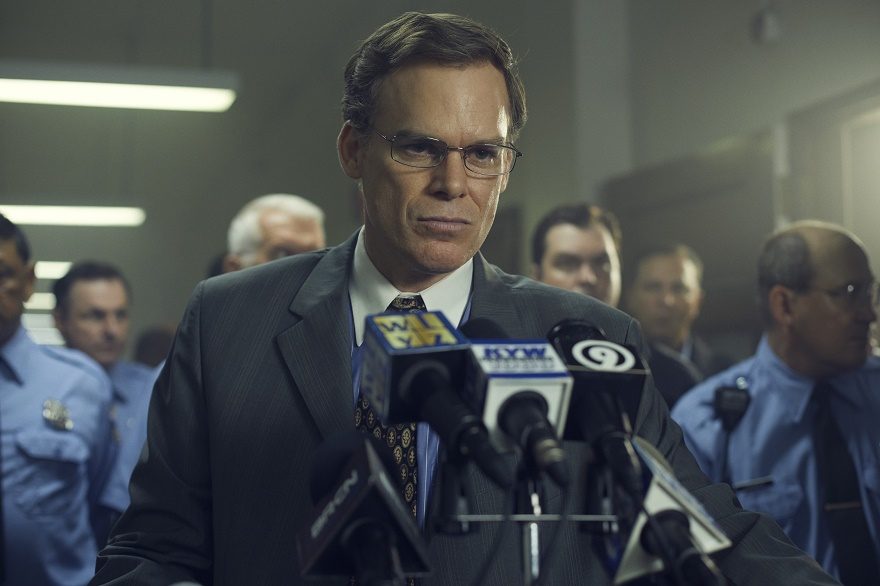 Inescapable politics aside, however, In the Shadow of the Moon remains a mystery that’s easy to invest in, even if a lot of the twists are predicated on a bunch of wibbly-wobbly-timey-wimey hoopla. Mickle never stays in one place longer than necessary thanks to the densely packed, yet surprisingly economical script, allowing the director to keep the pace quickened and imbue everything with a keen sense of style and forward momentum. (A noir thriller that’s not underlit or drenched in neon is a serious rarity these days, so In the Shadow of the Moon earns considerable points for that alone.) The hair, make-up, and production design teams put in some fine work, as well, ensuring that each segment of the story has its own distinct look and feel while never losing sight of the larger picture.

Holbrook’s leading performance anchors the narrative nicely, with the actor being able to portray Tommy at various points of obsessiveness and increasing madness over the passing years. Coleman brings a lot of mystery and grace to her smaller, but impactful role as the time travelling hitwoman who always stays one step ahead of her pursuers and knows more than she’s letting on. Hall even gets to put in some good work with a role that has the opposite trajectory of Holbrooks: someone who starts off as a jerk while climbing the professional ladder, but then gradually turns into a kind and caring person and eventually becomes one of Tommy’s last remaining allies. The script certainly gives the cast plenty to work with, and none of the primaries squander an opportunity to go even deeper into the characters and their complicated mindsets.

As In the Shadow of the Moon chugs along and many threads are still left dangling once Mickle heads into his climax, one begins to wonder if all of this is going to add up to a cohesive whole. The answer is both yes and no. A lot of the story beats in Mickle’s latest will turn out to either be undeveloped or unlikely red herrings, with some of the bigger sci-fi related reveals as to what’s actually going on feeling tossed aside like they don’t matter to the greater narrative. That’s a little disappointing, but the biggest reveal (one that can’t even be hinted at until the second to last act) brings everything home so nicely that the detailed explanations about how and why all this is happening is hardly missed. Like many twist endings in the sci-fi genre, the overall merits and effectiveness of this one will be hotly debated, but there’s no denying that it adds an emotional weight that will cause viewers to reconsider everything that came before it. Considering that the entire point of In the Shadow of the Moon is about how one needs to look to the past for clues about the future, I would consider such an ending a success.

In the Shadow of the Moon is available to stream on Netflix starting Friday, September 27, 2019.

Check out the trailer for In the Shadow of the Moon: