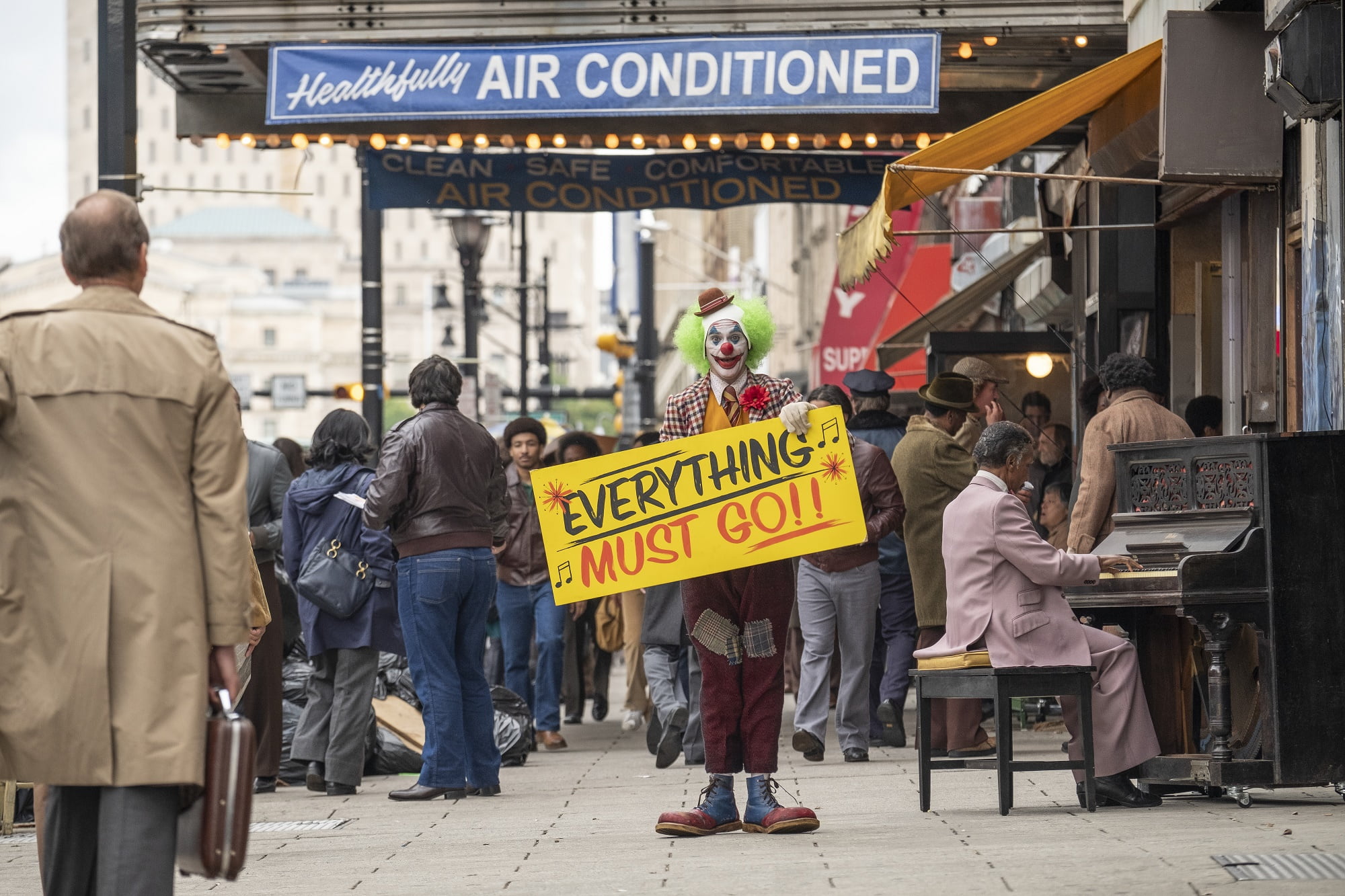 Joker, director and co-writer Todd Phillips’ dark and violent attempt to tell the origin story of one of the nastiest comic book villains of all time, is, like the character at the centre of it all, hard to define, but leaves an indelible impression. Perhaps most effectively viewed as a snapshot as to how pure evil and malice is created through a variety of social and psychological factors and less necessarily as a reflection of modern day fears and prejudices, Joker certainly paints a provocative, unnerving picture; the merits of which have been hotly debated since its premiere at the Venice and Toronto film festivals last month.

It’s both an unabashed homage to Martin Scorsese in the late 1970s and early 80s – most obviously Taxi Driver and The King of Comedy – but also the kind of big budget studio production that has a higher-than-necessary opinion of itself. Joker is well written, looks outstanding, and boasts one of the year’s most notable and transformative performances from Joaquin Phoenix, but it also can’t fully decide if it wants to be an unnerving portrait of a budding serial killer or a comic book movie. Despite the constantly warring settings of creating such a studio picture on a blockbuster scale (albeit with a more modest budget than most comic book movies these days) and making an evil thriller, Phillips is at least able to settle upon a suitably malevolent tone throughout and stick with it until the appropriately bitter end.

The Gotham City of Phillips’ Joker is made up to look like New York City in the late 70s and early 80s; a decaying, crime ridden, amoral metropolis literally drowning in its own garbage. It’s a city where everyone looks out for themselves and empathy for one’s fellow man and woman is nonexistent. Mentally unstable Arthur Fleck (Phoenix) is one of Gotham’s many damaged citizens, trying to make a go of it as a clown-for-hire in a city that doesn’t feel much like laughing or smiling. It probably doesn’t help that Arthur – who’s afflicted with a psychological condition that causes him to burst out into inappropriate fits of laughter when he’s nervous, scared, or pained – is pretty bad at his job. Arthur, who cares for his ailing mother (Frances Conroy) whenever he isn’t working, delusionally dreams of becoming a successful stand-up comedian in the mold of his late night talk show host idol (Robert De Niro, very obviously taking over the Jerry Lewis role from The King of Comedy) and winning the affections of the woman (Zazie Beetz) who lives down the hall. The more ridicule and rejection Arthur faces, the bolder and darker his goals become.

Although it’s tied to one of the most lucrative franchises in comic book and cinematic history, Joker remains a dicey proposition. In recent years, thanks to the likes of Suicide Squad, Guardians of the Galaxy, and Deadpool, comic book antiheroes have become the industry standard. Audiences have a proven zest these days for characters who march to the beat of their own drummer and straddle the lines between the heroic and the illegal. Joker, despite its title and Arthur’s choice of profession, strips away all of that self-awareness and shows an anarchic figure not as an “antihero with a few good ideas” (which is how most people choose their elected officials these days, but that’s another topic altogether), but rather as a budding, inevitable, and enabled force of unfiltered, unapologetic evil.

While The King of Comedy and Taxi Driver might be the most obvious points of cinematic comparison for Joker – right down to a borderline corny balletic dance Phoenix has with a handgun that looks like it could be a deleted scene from the latter – Phillips’ latest has just as much in common with John McNaughton’s controversial Henry: Portrait of a Serial Killer, only with marginally sunnier source material. This is probably the biggest reason why Joker has amassed such a dangerous reputation before it has even been released.

As cliched and hackneyed as it sounds, mass audiences might not be prepared for something like Joker, and it’s bound to be misinterpreted by viewers and critics alike as a result, and despite the fact that Phillips’ in no way condones the actions of the film’s main character. If Joker had come out in the early 80s, no one probably would’ve batted an eye at this. Today, it’s seen by some as a sick movie for sick times, but that speaks down to what Phillips wants to say about man’s inhumanity to man, and how cuts to social services and humanity’s desire to mock the less fortunate can create irreparable, festering wounds. Joker isn’t a portrait of an antihero capable of forming a resistance against the elites; it’s a portrait of unchecked mental illness and entitlement run amok, and it’s appropriately terrifying and depressing rather than entertaining. 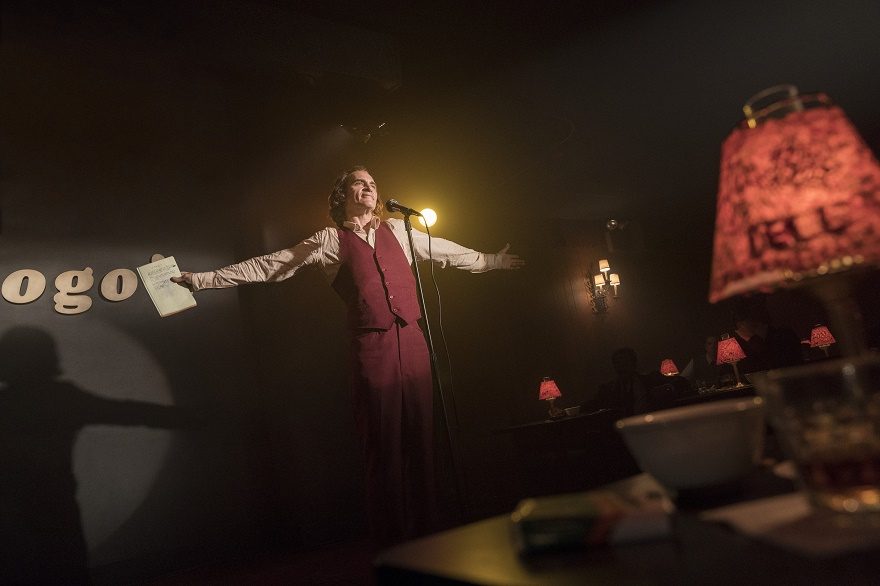 Not all of Phillips’ sometimes grandiose and appropriately grotesque attempts to push the viewer’s buttons throughout Joker work, but the filmmaking itself is unquestionably confident and resolute. Phillips, who spent most of his career making lowbrow comedies like The Hangover movies and Old School, understands that the complete absence of laughs is tragic, and not once during Joker does the director and co-writer attempt to do anything that can be seen as funny. It has been a frequent complaint among comic book movie detractors that such films often take themselves too lightly or too seriously. Joker definitely takes itself seriously, but not in the same way as more recent takes on Superman and Batman attempted. Instead of making Joker into some sort of goofy take on a Greek tragedy, Phillips makes his film into something unabashedly psychotic and unhinged. It’s grimy, bloody, and malicious, and if we’re speaking honestly, this setting is vastly preferable to the same warmed over takes audiences have been gleefully beholden to for the past decade or so of superhero and villain origin stories. It’s both gross by design and refreshing at the same time.

The script from Phillips and Scott Silver (The Mod Squad, 8 Mile, The Fighter) is pretty standard “making a monster” fare that won’t surprise anyone familiar with prime-era Scorsese, but the director, star, and craftspeople do a fine job of elevating a mostly predictable storyline; one that won’t surprise anyone familiar with the character, but does offer up an intriguing revelation about the villain’s connection to his greatest rival that may or may not be true. The cinematography from frequent Phillips lenser Lawrence Sher (who delivers his finest work to date) and the film’s impeccable production and costume design (which is heavy on greens, browns, grays, and whites to give everything a sickly pall) add a lot to Joker that Phillips and Silver can’t express in the script.

Everything else falls on Phoenix’s gaunt, wobbly shoulders, and he’s perfect, bringing the appropriate level of maliciousness, nervous energy, and mystery to the title character. Phoenix’s take on Arthur is one of a man whose confidence and anxiety are locked in perpetual battle. He believes in himself to a frightening degree, but his body language showcases a lot of fear and trepidation; almost like Arthur isn’t in control of his own actions, which is a great choice for someone so detached from reality. Every motion of his body is like watching slasher movie villain Michael Myers with serpents for bones. It’s one of the most menacing on screen performances in quite some time, and assuredly the most grounded portrait of the character to date.

And yet, for all of Phoenix and Phillips’ efforts, Joker remains – to some degree – beholden to potential franchise conventions, and a curious desire to seem less purposefully off-putting than it actually is. There are some rather unfortunately incorporated set pieces that stop just shy of glamourising inherently reprehensible actions, including a terrible song choice at a pivotal moment in Arthur’s increasing empowerment that never should’ve been considered, let alone approved. There are a handful of flowery, overwritten speeches designed to add a veneer of dramatic respectability, but those are the portions that are bound to be most misunderstood because they’re coming from the perspective of a screenwriter creating these situations from a distance and not one of a psychopath. The actual violence is shocking, but it’s still in the same stylized manner one might expect rather than something grittier and more realistic. As far as Phillips is pushing audiences with Joker, he’s also stopping just short of ensuring that he doesn’t kill off a milkable cow by fully embracing the darkness. After all, there is another Batman reboot just on the horizon, and I’m sure his bosses don’t want to upset that apple cart.

But the fact that Phillips – who delivers easily his best film to date with Joker – is pushing at all against convention is worthy of praise. He’s boldly assuming a certain degree of viewer intelligence and engagement with Joker, and while it will be heavily debated if he’s giving the film’s target demographic of young, white, disenfranchised males too much credit, it’s an unquestionably admirable approach. In its best moments, Joker feels appropriately reckless and dangerous; a spot-on reflection of true villainy.

Check out the trailer for Joker: