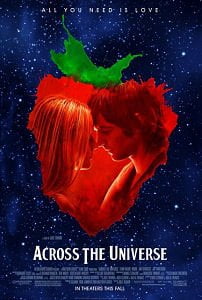 Across the Universe
The Beatles-inspired musical Across the Universe arrives across the country this week from director Julie Taymor, and starring Jim Sturgess and Evan Rachel Wood as two lovers caught in the strife of 1960s-era New York. Frequently breaking out into song, and hippy-induced visuals, the film mixes an anti-war message with a simple love story and some of the best music of the era. While this film won’t appeal to everyone, Beatles fans should appreciate the music sequences that also seem to have inspired numerous aspects of the film.

In The Shadow Of The Moon
The surviving crew members of the Apollo missions, which includes the first men to walk on the moon, talk about their experiences between 1968 and 1972. In The Shadow of the Moon includes restored NASA footage from the missions, and features Buzz Aldrin, Alan Bean, Eugene Cernan, and Michael Collins, just to name a few of the astronauts from the historic missions. Critics have been praising the film, with Richard Roeper of Ebert & Roeper calling it, “A beautiful, exhilarating, and sometimes deeply moving documentary.”

Eastern Promises
David Cronenberg‘s Eastern Promises stars Viggo Mortensen is Nikolai, a London mobster who finds himself caught between the interests of his family, who are a powerful group of organized criminals, and the innocent Anna, played by Naomi Watts. Cronenberg is a legend in Canadian cinema and the film has already received critical acclaim with Geoff Pevere of the Toronto Star calling it, “Menacingly brilliant.”

Resident Evil: Extinction
The latest Resident Evil film arrives this week and once again stars Milla Jovovich as our zombie-killing heroin Alice. She continues to fight the Umbrella Corporation, which spawned the zombie infestation, as her caravan of survivors find themselves in the remains of Las Vegas. Russell Mulcahy directs the script by producer Paul W.S. Anderson, who also wrote and directed Alien vs. Predator – a bad omen unto itself. The film is the latest sequel based on the video game series of the same name.

Into the Wild
Sean Penn returns to the director’s chair with this adaptation of Jon Krakauer‘s book Into The Wild, which tells the real life tale of Christopher McCandless, played by Emile Hirsch. Christopher abandoned civilization in 1992 to live in the Alaskan wilderness, and along the way he encounters a number of people who influence him. The film recently debuted at the Toronto Film Festival and received a number of great reviews, with early buzz placing it as a contender for an Oscar nomination.

Good Luck Chuck
Jessica Alba‘s latest film is another off-beat comedy where she plays, and I’m not making this up, an accident-prone penguin specialist. Chuck, played by Dane Cook, finds himself drawn to Alba’s character, but is cursed with a rather popular problem where women always meet their Mr. Right after sleeping with him. Not wanting to lose her, Chuck has to find a way to change his luck. Early reviews online have suggested that the film is funny, and a bit raunchy, but doesn’t deliver an appealing ending.