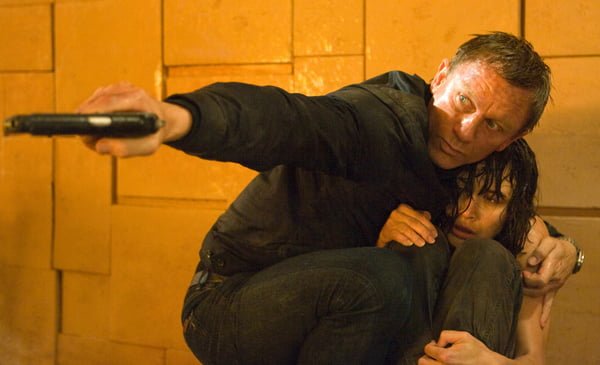 Daniel Craig and Olga Kurylenko in Quantum of Solace

Things quiet down a bit this week, with only two notable releases coming to DVD. On the one hand I take a look at the latest Bond movie, which arrives on Blu-ray this week, with Daniel Craig reprising his role as the iron-skulled 007, who takes on a global evil in Quantum of Solace. Also arriving, Andy Richter‘s short-lived sitcom makes an appearance on DVD.

With a trail of money to follow, Bond hunts down the organization known as Quantum, led by the dastardly, downright evil, Dominic Greene (played by Mathieu Amalric). And while there are new women to be wooed, including the latest Bond babe (Olga Kurylenko as Camille), all that seems to matter is that Bond gets his revenge.

Even forgiving that lame maniacal plan, the new Bond film should have been an easy hit. After all, Casino Royale was a spectacular reboot for this franchise that was otherwise lagging, and Craig’s Bond is a tough, unflinching hero with an enticing dark side.

Compared to Martin Campbell’s Casino Royale, Quantum director Marc Forster fails to find the same magic with screenwriter Paul Haggis, who wrote the screenplays for both films. Forester’s direction certainly lacks the pop of Campbell’s iconic 007 film, but at the same time Haggis’ second Bond script also lacks the simplicity of the previous film. We also lose a lot of the fun in discovering this new hero who was seemingly hiding under those layers of past films.

From my perspective I think it was a mistake to try to follow Casino Royale with a sequel storyline anyway. Bond films rarely follow sequential stories, and this film flounders in the wake of that superior film.

The only bright side to this tepid film is that the action is once again a thing of beauty. Buildings crumble, cars explode, and boats fly through the air. This is the one area where you can count on Bond films to deliver, and carrying on from the last film, the stunts and special effects are nothing short of remarkable.

Otherwise, in terms of the cast, Craig carries the weight of this film superbly, and delivers a mostly memorable performance in this otherwise weak film. Both Amalric and Kurylenko, however, are merely adequate next to our hero, and barely invest much worth noticing in their roles. Again, I can’t help but compare these two to their counterparts in Casino Royale where Eva Green gave a wonderful performance as Vesper Lynd, and Mads Mikkelsen made the villain, Le Chiffre, a force to be reckoned with.

Bond fanatics will likely be undeterred by the film’s weak points, since it was still better than a lot of the older 007 movies, but it is a sad sequel to what I think was the best Bond film ever made. It also suggests the franchise needs a lot more work to stay interesting as it attempts to stay relevant.

Other James Bond titles arriving on Blu-ray this week include Goldfinger, Moonraker, and Never Say Never.

Andy Richter Controls the Universe: The Complete Series
After a mere 19 episodes on TV, Andy Richter’s short-lived comedy series came and promptly went off the airwaves. For the serious Richter fans, this new DVD set gives you a refresher for this often hilarious show that essentially put the first nail in Richter’s sitcom coffin.

Richter plays a short story writer who works for a gigantic company, which is the only way he can pay the bills. Narrating the daily humdrum of his life, Andy imagines what might happen throughout his day, versus what actually plays out in his life.

Although the series didn’t last long, Richter was an entertaining star, and the cast is a lot of fun. Richter also infused the series with a definite odd quality, that makes the show stand out from the usual sitcom fare.