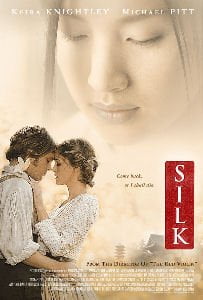 Silk
Michael Pitt stars in this thoughtful film as HervÃ© Joncour, a young officer who is sent to Japan in search of fresh silk worm eggs by a French trader (Alfred Molina). HervÃ© has to leave his new wife, HÃ©lÃ¨ne (Keira Knightley), behind for months at a time to make the expedition and while he is away discovers an exotic beauty that torments them both. Silk is beautiful, dramatic, and a romantic tale of love and lust, but it’s also a painfully slow film. Pitt is a stolid actor who barely emotes and the story is careful with nearly every detail. An impressive film to be sure, but only for those with sufficient patience.

The Kingdom
In this film starring Academy Award winner Jamie Foxx, an FBI team is secretly sent to Saudi Arabia to help clear an international incident. The all-star cast includes Jennifer Garner, Jason Bateman, and Chris Cooper in an action-thriller that has been heavily promoted for weeks. Foxx has had mixed results since winning an Oscar in 2005 for Ray, and this film looks like little more than a standard action film that has just been dropped in a new locale. Still, The Kingdom has an interesting angle, and Peter Travers of Rolling Stone said that director Peter Berg “stages every ambush, gun battle and car chase as if his life depends on it.”

King Of California
First time writer and director Mike Cahill delivers a sweet and funny film about a father and daughter trying to reconnect after years apart. In King Of California, Michael Douglas stars as Charlie, a troubled and manic-depressive man who returns from the hospital to live with his daughter Miranda, played by Evan Rachel Wood. Miranda has to find a way to deal with Charlie’s moods and odd ideas as he tries to convince her that he knows how to find buried treasure in their home town. The movie is at its best when both Douglas and Wood are facing off, but the script is fun and endearing, even if it is sometimes unbelievable.

The Game Plan
Dwayne Johnson, also known as “The Rock” from his days as a wrestler, jumps into a family comedy this week with Disney’s The Game Plan. Johnson stars as Joe Kingman, a football player who discovers that he may have a daughter. Madison Pettis plays Peyton, the young girl who leaps into Joe’s life and starts wrecking havoc. On the bright side, Johnson is a likeable actor in nearly everything he’s done on the big screen, but there’s no way to ignore that this sounds like yet another sugary sweet comedy from the once great film company. As an option for a family film though, this is your best bet for the week.

Also opening this weekend is Feast of Love starring Greg Kinnear, Morgan Freeman and Selma Blair in a story about the highs and lows of love. Plus, there’s Shake Hands with the Devil, an adaptation of Romeo Dallaire‘s book of the same name about the 1994 Rwandan genocide, and The Jane Austen Book Club, which follows six book club members who discover echoes of Jane Austen’s stories in their lives.