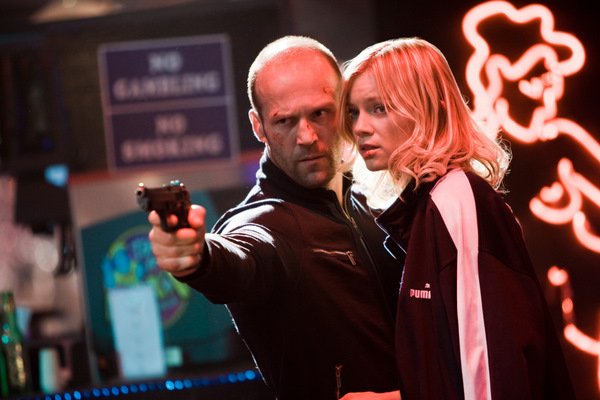 Opening this week in theatres, Jason Statham miraculously returns as Chev Chelios in Crank High Voltage, Zac Efron stars as 37-year-old restored to his youth in 17 Again, and in the political thriller State Of Play, Russell Crowe plays a man trying to get to the bottom of a massive Washington cover-up.

Crank High Voltage
In what might be one of the unlikeliest of sequels, Jason Statham stars once again as Chev Chelios, who you might recall appeared to be quite dead at the end of Crank. Our anti-hero fell out of a helicopter in the final act to kill the man that injected him with poison.

But Chev didn’t die from the fall, apparently, and now a Chinese criminal syndicate has harvested his heart, replacing it with a machine that will only keep him alive long enough for them to try to harvest the rest of his organs… unless he can get his indestructible heart back.

That’s the premise for this amusing sequel, which is sure to be a lot of fun, although it seriously begs the question whether we’re in for more of the same, or if writers/directors Mark Neveldine and Brian Taylor can come up with new twists and turns to make Crank High Voltage truly unique.

And honestly, the first film was actually far better than I expected, at least in terms of filmmaking. The visuals were fast-paced and frenzied, the effects were great, but best of all, Neveldine and Taylor had fun making it. You could see it everywhere, and that made the final product even more fun to watch, from the jokey action sequences, to every impossible moment of the story.

Co-starring Dwight Yoakam, Amy Smart, and Efren Ramirez, the film also reconnects a lot of the dots from the last film, with just a few additions, like Clifton Collins, Jr. as the Mexican mobster El Huron, and David Carradine as the 100-year-old Poon Dong.

Since Maple Pictures decided not to screen the film to the media, it’s hard to guess just how good or bad Crank High Voltage is going to be. It’s the kind of film that really doesn’t need reviews to be successful, in all honesty.

Being a huge fan of Crank means that I’ll still be headed to theatres this weekend to see exactly how the new film turned out. There is certainly a big chance that the movie is going to be a complete retread of the first, but since Statham is such a fun, memorable action star, it may be forgivable, as long as you’re an action junkie like me.

17 Again
Mike O’Donnell had a big decision to make when he was seventeen: impress the basketball scout and go on to fame and fortune, or settle down with his expectant girlfriend. If you’ve seen any comedies in the last 20 years, you probably know what happens next – Mike marries his sweetheart, grows up and becomes a gigantic loser.

He’s also given a second chance, falling into the opportunity to be 17-years-old again, but this time it’s 2009 and he’s still stuck with the equivalent of an old geezer personality.

Starring Zac Efron and Matthew Perry as the young and old Mike, respectively of course, the film is a comedy with a light approach to this failure’s real problem in life: his family. Maybe at 17 he can find a way to reconnect with his wife and kids once more.

For me, the biggest problem is the idea of watching Efron for the length of the movie. Among the teen set you would have a hard time finding a more popular actor in the same age group, aside from Robert Pattinson, but for me he’s just the annoying High School Musical kid who keeps popping up in all the bad Saturday Night Live skits.

Early reviews for the film paint a mixed picture, but most of the critics have pointed out that 17 Again is wholly unbelievable, and suffers from poor direction, and a tendency to borrow from other similar comedies.

Allan Hunter of Screen International was one critic, however, that gave the film a fairly positive review.

“The surprise factor,” Hunter wrote, “is that the film has just enough charm and good humour in its own right to broaden that demographic to a wider, recession-hit audience in search of undemanding, feel-good fun.”

State Of Play
American politics is a fertile topic for filmmakers, spawning hundreds of films over the years. And the best ones seem to occupy that always entertaining genre known as the thriller. That, of course, brings us to the latest film starring Russell Crowe as a tough journalist trying to find the truth among politicians.

Crowe plays Cal, one of Washington, D.C.’s most well-connected reporters. So well connected, in fact, that Cal ends up investigating a case involving a murdered research assistant, the mistress to his friend, Congressman Stephen Collins, played by Ben Affleck, .

Performing a balancing act of sorts, Cal is pushed by his editor, played by Helen Mirren, to do his job, no matter who is involved. At the same time he uncovers a multi-billion dollar conspiracy that puts anyone’s life in jeopardy, should they try to expose the truth.

At press time there were only a handful of reviews to go on, but the critics were either calling it fun conspiracy thriller, or a lukewarm rehash of better films.

J. Hoberman of the Village Voice was one of the critics who liked the film, however, saying in his review that State Of Play was, “an effectively involving journalism-cum-conspiracy yarn with a bang-bang opening and a frantic closer.”