The Devil All the Time | Review 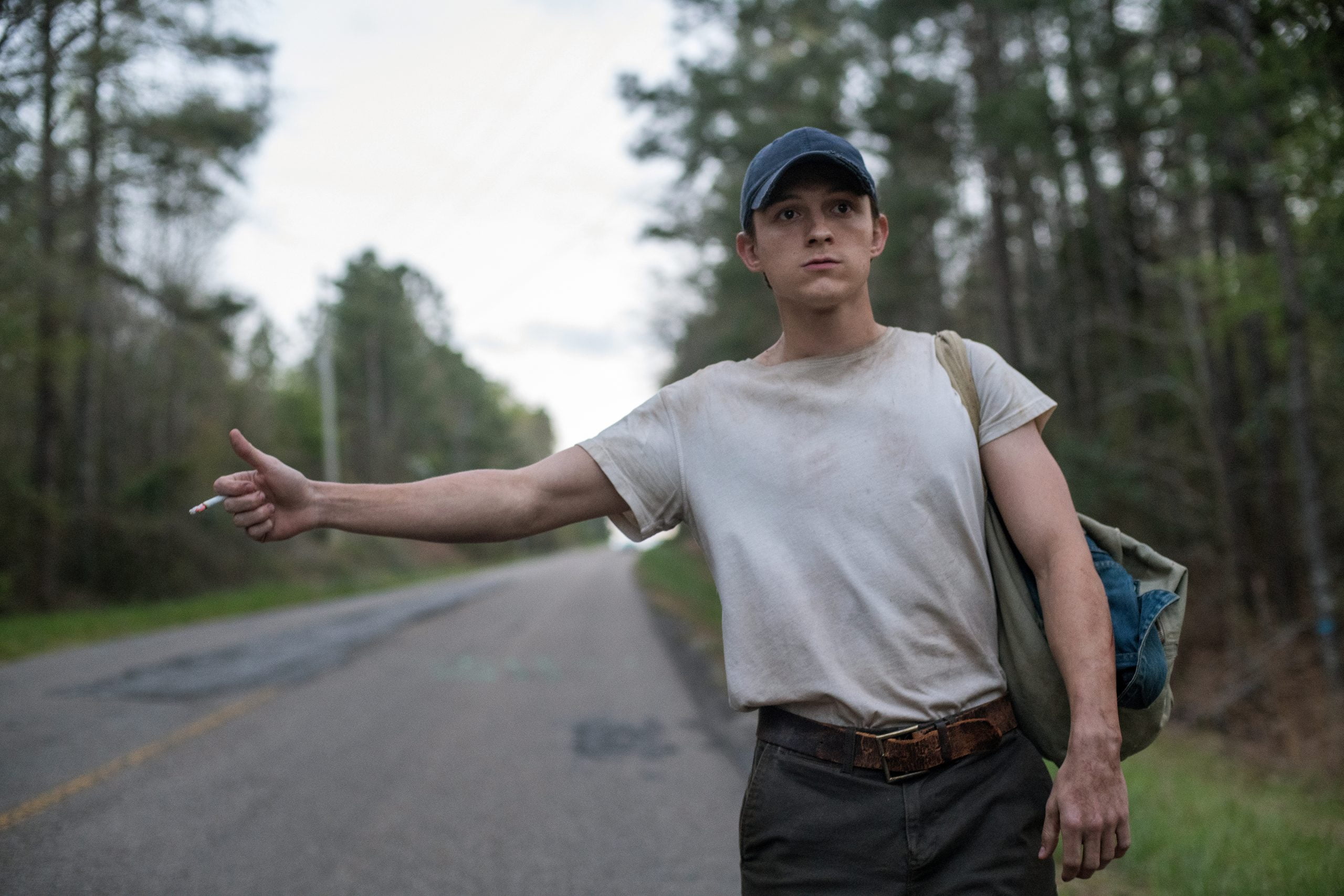 Based on the novel of the same name by Donald Ray Pollock (who also serves as narrator here), The Devil All the Time unfolds across decades, state lines, and dozens of morally dubious characters. Adapted for the big screen by director and co-writer Antonio Campos, The Devil All the Time weaves the interconnected stories of various schemers, lowlives, and killers in the small towns of Coal Creek, West Virginia and Meade, Ohio, spanning from just after the end of World War II and going well into the Vietnam era.

To recite the plot and explain the significance of the characters involved with any degree of accuracy would take 135 minutes, or exactly the entire running time of The Devil All the Time. Campos’ film is so overstuffed with plot and significance that there’s no time to take a breath or integrate anything even approximating a grace note or character beat. It’s a film that barrels down the dusty highway at top speed, swerving all over the road like a madman actively trying to hit anything that gets in its way. On one hand, it’s invigorating. On the other, Campos’ slavish adherence to Pollock’s multi-layered story is a chore to sit through long before most of the film’s big stars even show up to play.

And there are plenty of stars, but thankfully all of them are wonderful across the board, softening some of Campos’ narrative whiplash rather well. Following a lengthy (and I do mean VERY lengthy) prologue where fine actors like Bill Skarsgård, Haley Bennett, Harry Melling, and Mia Wasikowska set up the story behind the story, eventually The Devil All the Time gets more or less to it’s main plot, unless one counts a continually running throughline involving husband and wife serial killers (Jason Clarke and Riley Keough). I’d call that a subplot, but it takes up just as much time as any of the other five or six stories going on here.

The emotional core of the story (if one could call it that in a work this borderline nihilistic) centres around Arvin Russell (Tom Holland), a fairly average young man who was born with his daddy’s quick and violent temper. He lives with his aunt and uncle and serves as a  protector for his socially awkward and fiercely devout half-sister, Lenora (Eliza Scanlan). Their lives are upended somewhat by the arrival of a new preacher in town (Robert Pattinson), an arrogant, condescending evangelist who wants to do ungodly things with Lenora. Arvin isn’t having any of that, not just because he thinks the preacher was a jerk to his aunt. There’s also a past precedent for his disliking unholy men of God.

Wait, let me back up. Did I mention the crooked sheriff (Sebastian Stan) that’s running for re-election? He’s the brother of the female member of that serial killer team I mentioned before. Gotta remember he’s in the mix of action, too. 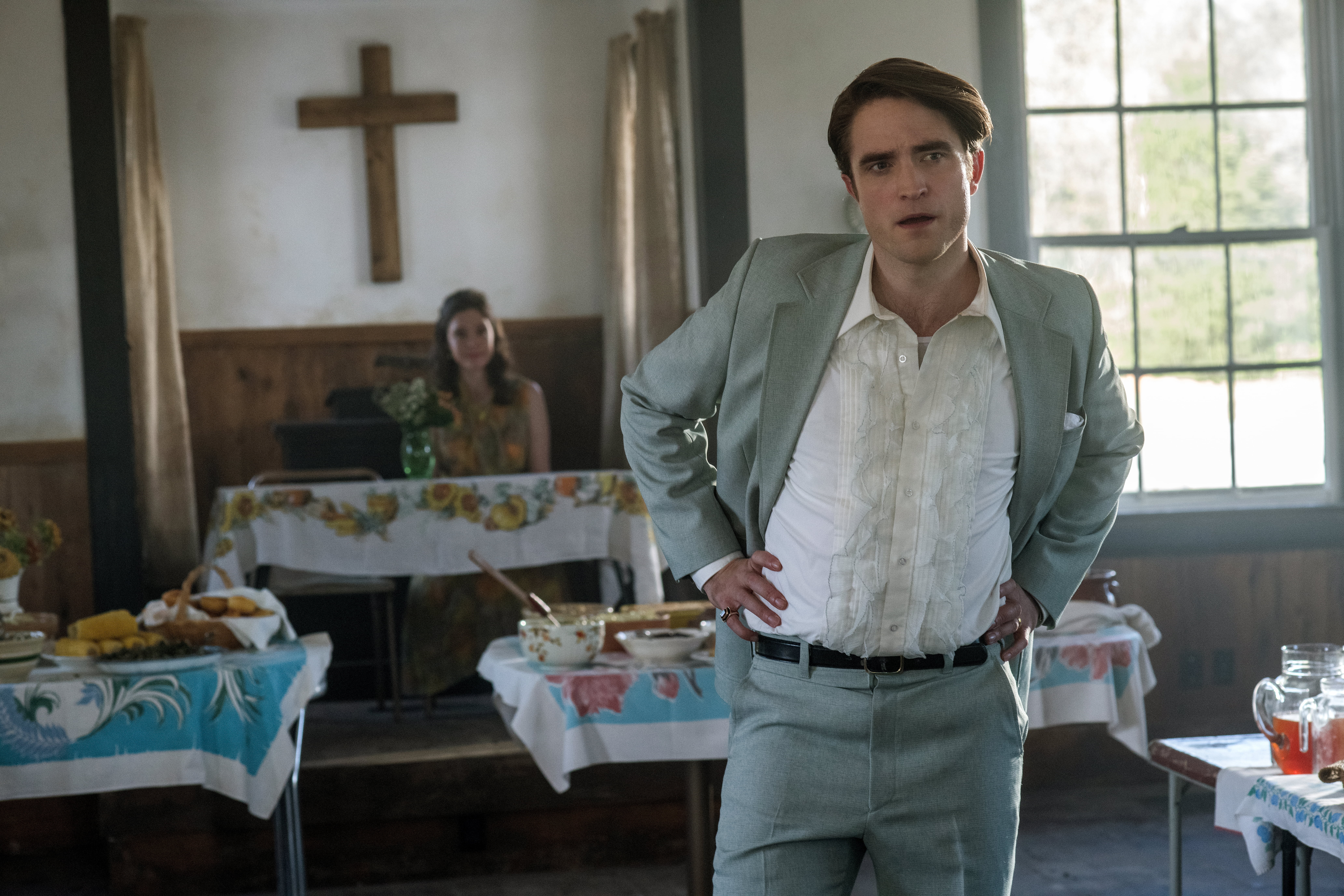 Campos (who most recently directed the underrated and similarly grim biopic Christine) has a firm handle on atmosphere and tone throughout The Devil All the Time. It’s a dark story that only grows darker and more desperate the longer it drags like a half dead body tied to a galloping mustang. There’s scarcely a moment of joy to be found, but that’s one of the film’s best qualities. It’s a dirty, grimy descent into madness where release is only found at the end of a gun barrel or through a brutal beatdown. The Devil All the Time is an appropriate title for a story about various forms of backwoods inhumanity told through characters who only understand the power of physical and emotional violence. It’s handily the nastiest “mainstream” film with this considerable of a cast and budget since Wayne Kramer’s bonkers 2006 cops and mobsters thriller Running Scared.

More or less, everything other than the script (co-written by Paulo Campos) and pacing is on point. The production design, costuming, and make-up teams all do a spectacular job enhancing the dangerous vibes throughout. The political subtext regarding American involvement in foreign wars is subtle and more thought provoking than anything found in the main storyline. The performances are solid across the board, with no one feeling out of place. Holland shines brightly with a gritty, stoic turn that will hopefully go a long way in staving off directors who want to type-cast him as a dorky boy-next-door type. Skarsgård does an exceptional job early on making viewers invest in a movie that will become increasingly more difficult to remain invested in. Pattinson continues his character actor hot streak as of late with a gleefully malicious performance.

But no matter how good the pieces are or the bristling intensity of the scenes that work best, The Devil All the Time doesn’t add up to much as a whole. The problem is easy to identify. As a sprawling story given a lot of time to grow, breathe, and wash over the audience, The Devil All the Time could’ve worked really well, even if it’s a huge ask of a viewer to sit through this much depression and nastiness for hours on end. (I’m sure Bela Tarr and Lars von Trier would disagree with that statement.) Without a chance to develop the characters beyond basic sketches and their most violent impulses, The Devil All the Time isn’t a downtrodden story that envelops the audience. It pummels them with tire irons, bare knuckles, pistol butts, and anything else it can get its hands on, simply refusing to let up and give the viewer time to care one lick about anything that’s happening. It’s like staring into the abyss, except the void is shouting and pointing a German luger back at the viewer.

There’s never a moment to reflect on themes of religion, trauma, abuse of power, and poverty. There’s no way to build tension, regardless of how captivating some moments are throughout. In a vacuum, the individual elements of The Devil All the Time are rather good, but without at least six more hours to gently nurture and finesse all of these threads and emotions, Campos’ film comes across like a chaotic, exhausting mess where things happen simply because there wouldn’t be a movie if they didn’t. I can’t even say that I necessarily would want to sit through an epic, multi-hour adaptation of something this purposefully demoralizing, but that would at least be a more rewarding experience.

The Devil All the Time is now available to stream on Netflix.

Pattinson has been delivering stellar character performances since The Rover in 2014. He’s only now getting mainstream recognition for his talent.